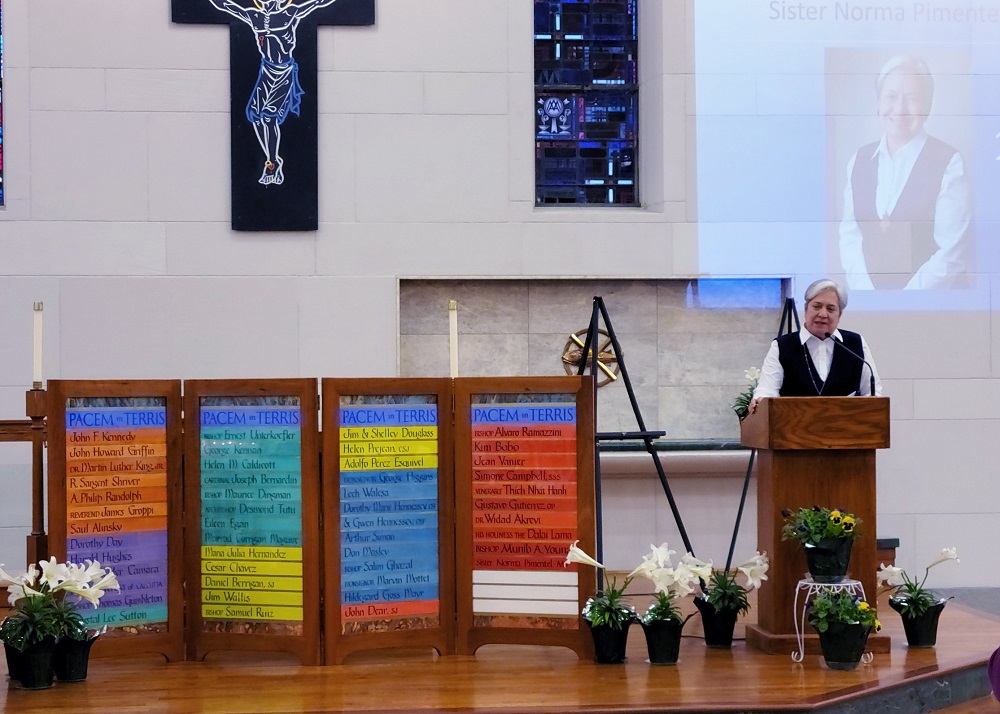 Sr. Norma Pimentel, director of Catholic Charities of the Rio Grande Valley in Texas, speaks about her work at the U.S.-Mexico border after receiving the Pacem in Terris Peace and Freedom Award on April 21 in Christ the King Chapel at St. Ambrose University in Davenport, Iowa. (CNS/The Catholic Messenger/Anne Marie Amacher)

Sr. Norma Pimentel visualized the tear-streaked, weary faces of people she serves at the border during her acceptance speech for the Pacem in Terris Peace and Freedom Award on April 21 in Davenport.

Davenport Bishop Thomas Zinkula presented the award at St. Ambrose University on behalf of the interfaith Pacem in Terris Coalition to Pimentel, executive director of Catholic Charities of the Rio Grande Valley and a member of the Missionaries of Jesus.

Pimentel is the 50th recipient of the award, created by the Davenport Catholic Interracial Council and inspired by Pope John XXIII's 1963 encyclical, "Pacem in Terris" (Peace on Earth), which called all people to secure peace among the nations.

"The coalition recognizes your vision and commitment to providing direct humanitarian aid to immigrants at our southern border," Zinkula said.

"Your leadership to promote respect for the dignity of immigrants instructs and influences neighbors near and far, including in the halls of power. Sister Norma, you truly embody the words of Pope John XXIII as 'a spark of light, a center of love, a vivifying leaven' to your brothers and sisters around the world,' " he added.

When she accepted the award, Pimentel said: "By recognizing me with the Pacem in Terris award, you are honoring the hundreds of thousands of the most fragile and vulnerable and suffering human beings I have encountered at the border of south Texas. It is their lives, their pain and suffering that become visible to the world by honoring me."

She told the audience that her experience at the border helped her to see the presence of God among the people there and it "has also been a grace that I can be present to them."

She spoke about speaking with children in detention who are crying and dirty from crossing the river into the United States.

She said they have pleaded with her to get out of detention and she has urged them to repeat the prayer, "Diosito ayúdanos!" — "God, please help us."

Pimentel said the families she sees at the border are "victims of crime, of violence, of persecution."

She spoke of the unprecedented global movement of people, due to political instability, violence, poverty and persecution. "Respect for life must be at the top of everyone's list. We cannot, we should not justify any violent action toward another person. We must be the voice that brings their voice forward — that implores for help to the world. We must let God be the force that draws us forward."

She also said this work is the responsibility of everyone.

Four days before the award ceremony, Pimentel was a guest on "Face the Nation" on CBS News where she emphasized her focus on the women, children and men at the border and not the politics of immigration policy. She conveyed that message consistently during her full day of visits and activities April 21 in Davenport and in Rock Island, Illinois.

"I was born by chance in the United States," she said over lunch with a small gathering of faculty, staff and students at Augustana College in Rock Island. The daughter of immigrants from Mexico, she and her family spent time back and forth in both countries. She embraces her identity and ties with both nations and her connection to people on the border.

Augustana religion professor Jason Mahn, a Pacem in Terris Coalition member, asked Pimentel whether it is difficult to work for structural change while addressing the immediate needs of immigrants. She said she focuses on being present to the people. That presence gives people hope, she believes.

Earlier in the day, she shared her story with students at St. Ambrose University.

"Before this, I didn't know who Sister Norma was," said Daniel Salazar, a St. Ambrose junior who attended her morning talk and participated in the award ceremony

After meeting Pimentel in person, Salazar, whose heritage is Mexican-American, felt inspired. "We could tell she was very genuine. She cares for the work she is doing."

He also said hearing her made him want to do more, "to use my opportunities to help others within my community who don't have those opportunities."