Washington, D.C. — The announcement that the Biden administration was raising the limit of annual refugee admissions from 15,000 to 62,500 was cause for celebration at a Georgetown University online discussion of migrant issues May 4. 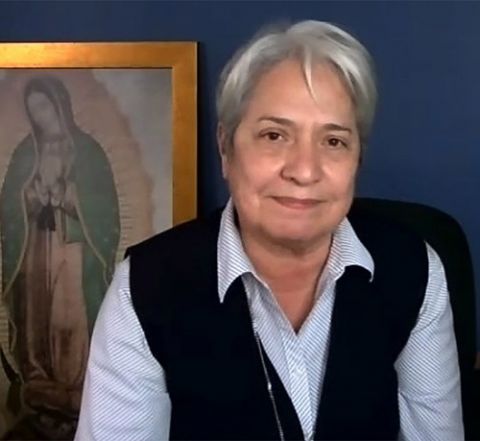 And Sr. Norma Pimentel, executive director of Catholic Charities of the Rio Grande Valley in Brownsville, Texas, said more visibility would help the cause, so she invited President Joe Biden to visit the U.S.-Mexico border.

"Sometimes I always say the best way to understand what is happening at the border is to come and see, you know?" said the Sister of the Missionaries of Jesus, adding that it makes a difference when you "actually see the face of a child, a mother hurting and suffering for their babies."

She said seeing this pain and the suffering up close "you then understand that your policies and your leadership will affect directly that life."

Pimentel urged the president and other national leaders to "please come and see" with open hearts what is happening at the border.

"At some point, I will," Biden said, when asked on March 21 if he'd visit the border, but no plans have been announced. Vice President Kamala Harris, who met virtually with Alejandro Giammatei, the president of Guatemala, on May 3, likewise has not made a border visit.

The panel, "Young and Latino Leaders on Immigration: Continuing Challenges, New Urgency, Time for Action," was sponsored by Georgetown's Initiative on Catholic Social Thought and by the U.S. Conference of Catholic Bishops.

In April, Pimentel condemned a video by Infowars host Alex Jones, who portrayed himself as physically stopping a carload of refugees he claimed were being trafficked.

She accused Jones of a "staged confrontation interrupting the goodwill of someone" taking the children to the Humanitarian Respite Center in McAllen, Texas, where she works.

"The Humanitarian Respite Center and Catholic Charities of the Rio Grande Valley are not involved in any human smuggling or trafficking networks," she said in a statement.

"You know, these are families," Pimentel said in the panel discussion. "Niños y mamas, simple just like you and me, our friends and our neighbors, they're people and they're hurting at the other side of the river, on the Mexican side, some of them are able to make it now into the U.S. side.

"And you see in their faces this profound pain that they've been through," she said, adding that she and others with her have been able to accompany these families and both cry and laugh with them.

Dylan Corbett, executive director of the Hope Border Institute, said he thinks there have been positive and significant changes under the Biden administration.

"You saw, for example, in the lifting of the refugee cap a real strong commitment to building or rebuilding our capacity to resettle refugees around the world," he said.

"We've been talking about immigrants in really bad ways for the last four years, as people we ought to fear," Corbett added.

"We've been vilifying and criminalizing and demonizing our migrant brothers and sisters for too long," he said, noting that now the president has "changed the tone around immigration and recognized that this is an opportunity for compassion and to treat people with dignity."

Read this next: Sisters say Biden's first 100 days are a good start overall, but not on immigration

Lawsuits lining up over detention of families and children