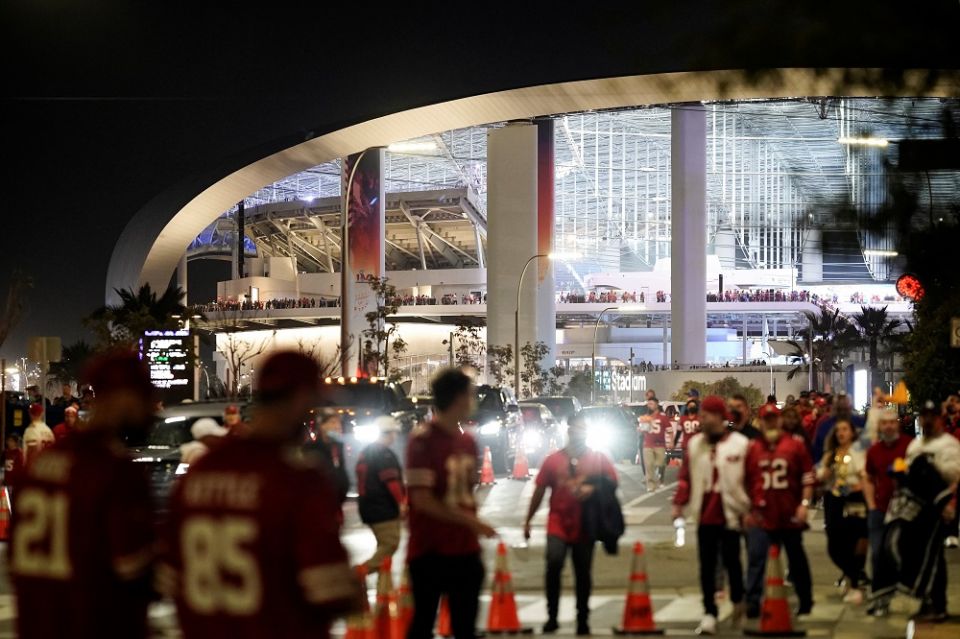 SoFi Stadium in Inglewood, California, on Jan. 30 after the Los Angeles Rams defeated the San Francisco 49ers in the NFC Championship game to advance to Super Bowl LVI. (CNS/Reuters/Bing Guan)

Los Angeles — For the first time in 30 years, the NFL's Super Bowl has arrived in Los Angeles — and with it, a fair share of the global media hype for which the annual sporting event is known.

But just as predictably, the game also has brought attention to what has long been portrayed as the dark side of the Super Bowl: the risk of human trafficking.

In the days leading up to the Feb. 13 game in Inglewood's new SoFi Stadium, local authorities have warned of coming sting operations and criminal penalties associated with sex trafficking.

For several weeks, initiatives such as "It's A Penalty" program have enlisted Rams kicker Johnny Hekker and other NFL players to remind visitors in places like the Los Angeles International Airport of the factors that make Southern California a trafficking hotspot: its proximity to international borders; its attractiveness to runaway youths; and the presence of inner-city gang commerce.

Last year, for example, more than 70 people were arrested and six possible victims were aided following an investigation into sexual exploitation during Super Bowl week in Tampa, Florida.

In Los Angeles, nonprofit organizations also have stepped up their outreach to educate the public as well as offer victim assistance, including the SOAP Project, which distributes bars of soap to L.A.-area hotels labeled with tips on how to identify possible victims in need of immediate help.

But while local Catholic advocates involved in the fight against trafficking appreciate the renewed attention, they also warn there's a risk in thinking the Super Bowl is an isolated occasion of danger.

"It may be counterintuitive to how the media talks about trafficking related to this as a 'Super Bowl issue,' but that rhetoric can take away from the fact there are injustices done all the time," said Sr. Anncarla Costello, a Sister of Notre Dame, who is chancellor of the Archdiocese of Los Angeles.

She also is president of the board of directors of Los Angeles-based Coalition to Abolish Slavery and Trafficking, or CAST.

The Los Angeles Times went even further, decrying the association between the Super Bowl and the heightened risk of trafficking as a "myth" and "falsehood" in a Feb. 6 editorial.

Costello noted the recent surge in human trafficking cases has been a result not of major sports events, but in large part due to circumstances caused by the COVID-19 pandemic.

"The danger is if we perpetuate this rhetoric around certain events such as the Super Bowl, people can start to associate human trafficking to only sporting events," Costello told Angelus, the online news outlet of the Archdiocese of Los Angeles.

"This tends to mitigate the need to continue to educate people regarding the presence and the prevalence of this horrible crime, which happens every day, in every city and town, and even right next door," she said.

CAST, working with the Department of Justice, provided support to nearly 2,000 human trafficking survivors in 2021, a 556% increase since pre-pandemic 2019. Hotline calls also were up 97%.

Michael Donaldson, senior director of the Archdiocese of Los Angeles' Office of Life, Justice and Peace, sees human trafficking as a scourge deeply intertwined with many of the other important life issues his department deals with.

For example, Donaldson noted, abortions are often procured by perpetrators as a form of birth control for victims, homelessness can result from a victim fleeing a trafficker, and those who slip out of foster care often end up introduced into this vicious cycle.

"As a life issue, it is something Catholics need to be part of," said Donaldson. "We can't be silent especially as we are in the major center of it."

Susan Patterson, the director of Through God's Grace Ministry, has hosted a human trafficking resource table at OneLife LA, an annual event in January. Patterson said she has encountered many who had difficulty believing human trafficking was happening locally.

"For the faith community, a path has been clearly laid out for what we can do regarding pro-life, homelessness, and other issues, but, it is not clear what the role of the church is in the fight against human trafficking," said Patterson.

Patterson noted that the church has shown paths for what faithful can do regarding issues such as abortion and homelessness, "but it is not clear what the role of the church is in the fight against human trafficking."

"We are not going to arrest our way out of the problem of human trafficking," said Patterson, who believes that ending the scourge of sex trafficking calls for community support from Christians of all denominations.

One tool in that effort has been the 2020 Christian documentary film "Blind Eyes Opened: The Truth About Sex Trafficking in America," offered to congregations as an educational resource.

Producer Geoff Rogers noted that one often-overlooked factor in LA's sex trafficking is the proliferation of the adult entertainment business.

"[LA] has a history of sexualization of people for sale, both men and women," said Rogers. "When you dive deep into this topic, it is as simple as the economics of a supply answer to a demand problem. Where does the demand come from? Often, the addiction to pornography taking place with a desire for unhealthy sex."

Rogers, co-founder of the faith-based U.S. Institute Against Human Trafficking based in LA, said that while human trafficking is not particular to the Super Bowl, it does attract anti-trafficking campaigns, which "is a great way to raise awareness," since "so many watch this game around the country."

Costello said, "Many of us cannot be on the front lines of the fight against human trafficking for whatever reasons, but instead of sidestepping the issue, we have the power to lift in prayer those who can ... and, of course, our suffering sisters and brothers who are the victims. We all can do something."

Death penalty denounced for ignoring people's capability to be 'redeemed'