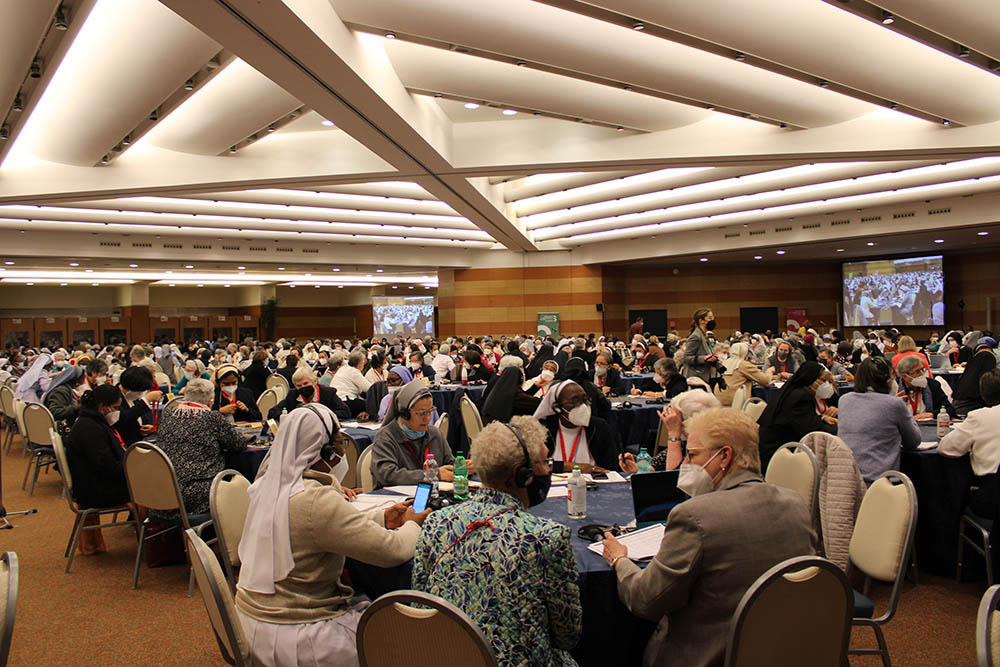 Nearly 520 sisters attended the opening-day session of the International Union of Superiors General's triennial plenary, the organization's first major in-person event since the start of the COVID-19 pandemic. The theme of the May 2-6 assembly, which is a continuation from two online sessions held in March and April, is "embracing vulnerability on the synodal journey." (GSR photo/Chris Herlinger)

The hundreds of sisters from six continents gathered in Rome for the triennial plenary of the International Union of Superiors General (UISG) spent the opening day of the convening discussing vulnerability as a way into the future.

The theme of the May 2-6 assembly, which is a continuation from two online sessions held in March and April, is "embracing vulnerability on the synodal journey." The plenary is UISG's first major in-person event since the start of the COVID-19 pandemic.

Embracing vulnerability is "completely contrary to the prevailing paradigm of our world," said Ted Dunn, an American author and licensed clinical psychologist with more than 30 years' experience as a consultant and facilitator to religious congregations and other faith-based organizations.

"It speaks to me of the essence of humanity and the very heart of transformation," Dunn said in a first-day address on May 2. More than 700 sisters registered for the plenary, and nearly 520 sisters are attending in person at the Ergife Palace Hotel and Convention Center in Rome. Among other highlights is a May 5 audience with Pope Francis, who has called for a synod on synodality that he hopes will help the church embrace its early roots. A Synod of Bishops on synodality is scheduled for 2023.

'Religious life will rise again. But there are hard choices ahead and no quick fixes or off-the-shelf solutions. All of the options you have will require hard work.'

The theme of vulnerability was raised immediately with a welcome from Sr. Jolanta Kafka, UISG president and general superior of the Claretian Missionary Sisters, and Sr. Paula Jordão, who led the assembled in prayer.

"We are celebrating life, and that fills us with joy," Kafka said. But in gathering, she said, the congregational leaders need to acknowledge the pain of the world, such as the war in Ukraine. She urged the assembled to pray for sisters both in Ukraine and in Russia.

Jordão, a member of the Verbum Dei Missionary Fraternity, a contemplative-active community founded in 1963 in Mallorca, Spain, said in her prayer that sisters have a desire "to embrace the wounds of humanity."

"You know we are vulnerable and poor. But we know that your grace makes us strong, makes us new," she said. "So send us out to the world."

Three sisters later spoke about their struggles with vulnerability and urged fellow sisters to embrace it.

That time was searing, she said: Nine elderly sisters died in one month, and the congregation had to suspend educational and health care projects.

"I trained myself to live with uncertainty," she said. "I put myself in God's hands. I understood the frailties and vulnerabilities of others."

Those lessons are important on the road to synodality, she said.

"Alone, we can't make it. We have to walk together," she said. "Vulnerability is the path of leadership today," and leaders like herself have to let "God take the reins."

Sr. Anne Falola, a Missionary Sister of Our Lady of Apostles, said she learned similar lessons as a Nigerian sister working in Argentina. Until she went to Latin America, Falola had not had to consider the dynamic of race. But as a missionary, she had to consider that and also learn that "the missionary becomes the vulnerable minority."

"Christianity is a religion of the vulnerables, so we are at home" with that knowledge, she said.

The third speaker, Sr. Siham Zgheib, originally from Lebanon and joining the plenary virtually from Aleppo, Syria, a city still recovering from years of war, noted that armed conflict carved through the social fabric of Syria and made everyone in the country vulnerable.

When faced with a decision between 2014 and 2016 about whether to leave or stay in Syria, Zgheib, the superior of a small community of the Franciscan Missionaries of Mary, said she and others in the community opted to stay, finding strength and sustenance by "clinging to the cross and drawing strength from its vulnerability."

Zgheib said she and others were afraid, but they remained because staying became a symbol of hope for women and children affected by the war.

'I trained myself to live with uncertainty. I put myself in God's hands. I understood the frailties and vulnerabilities of others.'

In his 45-minute presentation, Dunn was blunt in his assessment of the challenges facing religious life and, particularly, congregational leaders.

"This is a time of reckoning," he said.

"It is in these times of trial that we are tested — tested to our very soul. Life as we have known it, including religious life, is over, and there is no going back to the way things were. We stand at a crossroads now, and we have a choice," Dunn said.

"We can choose to steel our defenses, fend for ourselves and remain as comfortable as we can for as long as we can, or we can choose to embrace our vulnerability, look for the ancient path and, together, give birth to a new way of being. The question remains: What path will you choose?"

The world is at a "great turning," said Dunn, whose latest book is Graced Crossroads: Pathways to Deep Change and Transformation.

"Our entire globe is at the brink of a massive transition which we, as a species, are partially responsible for creating," he said. "The fate of the planet, humanity, and the nearly 10 million other species that inhabit our common home are all tied together. We will either evolve into a new way of being or devolve toward extinction."

Dunn said he believes "we have a moral responsibility to reckon with the damage we've caused and do everything in our power to transform our lives. While there are no guarantees, I believe that we have the capacity to transform this crisis and aid in bringing forth the next evolutionary leap in the ongoing story of creation."

He ticked off a list of challenges to congregations and religious life, including demographic shifts and the time and energy required to maintain congregational life, leaving little time to shape address the future. 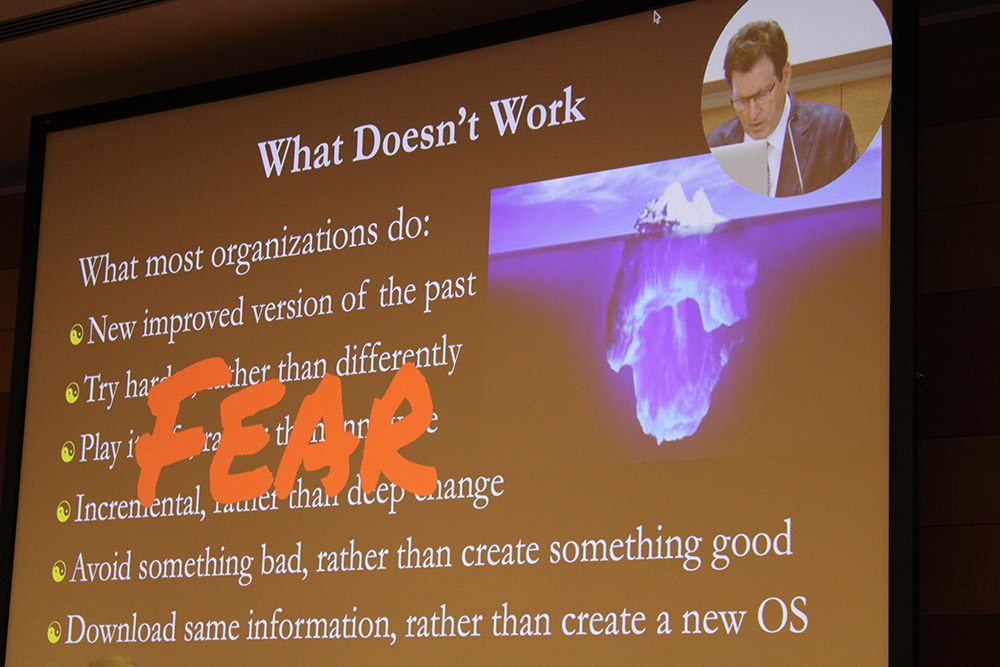 A slide used during a presentation by Ted Dunn, a licensed clinical psychologist with more than 30 years' experience as a consultant and facilitator to religious congregations and other faith-based organizations. Fear, Dunn said, should not be the basis for decisions that religious congregations make in uncertain times. (GSR photo/Chris Herlinger)

Drawing a distinction between "change" and "transformation," Dunn noted that the latter requires "soul work."

"Religious life is not dying, it is transforming, just as it has through many lifecycle changes since the time of Jesus," he said. "The denial that persisted until recently is fading and allowing more proactive approaches to adapt and change."

"Religious life will rise again," he said. "But there are hard choices ahead and no quick fixes or off-the-shelf solutions. All of the options you have will require hard work. There is no escaping it."

Most religious communities will fail to make the hard choices required of transformation, unable to "exert the emotional grit and spiritual discipline needed to make the hard choices to transform their lives," Dunn said. "They will choose, instead, the well-worn path of least resistance. The pressing needs to care for their members, plan for what to do with their land and buildings, and simply to maintain life as it is fills their calendars and eclipses the deeper work."

He added, "Unwittingly, bit by bit, communities make choices driven more by fear than by courage, choices that all but guarantee their demise."

A smaller percentage of communities "will listen for a deeper invitation. They will seek to transform their lives and discern God's call to new life." Those communities will plan for the external changes they need and also "open their lives to an inward journey, into the forest, through the dark night of the soul."

"Some will wait until it is too late and, by the time they wake up, they will have exhausted their resources and their will to change," Dunn said.

"Others will make only incremental changes, believing they are doing what's needed only to discover their safe, small changes are not nearly enough. And some of the most resilient communities will successfully make this bend in the road and bring forth new life. They will have a hand in facilitating the emergence of a new religious life."