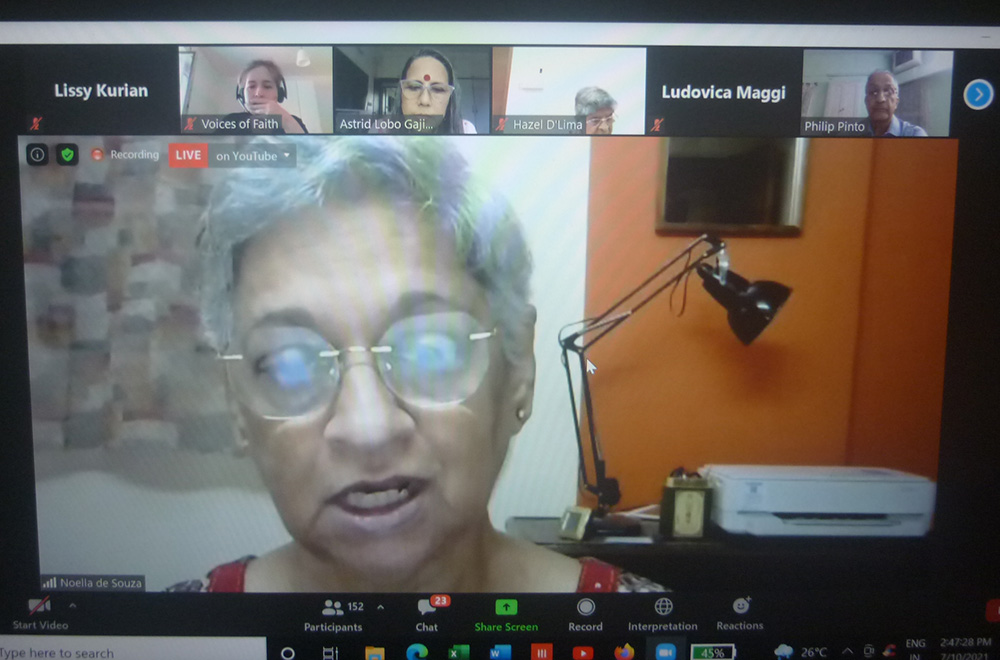 Sr. Noella de Souza of the Missionaries of Christ Jesus, a member of the survey team for a study on the status of women religious in India, addresses a July 10 international webinar. (Lissy Maruthanakuzhy)

The July 10 meeting organized by Voices of Faith, a Rome-based international network, discussed the findings of a Conference of Religious India survey conducted among the leaders of the women religious in the country.

Around 370 nuns, priests and laypeople from many English-speaking countries, Germany and Italy attended the two-hour program.

The survey was commissioned in 2018 by the women's section of the Conference of Religious India, the national association of religious major superiors in the country, after media reports indicated widespread exploitation of nuns in the Catholic Church.

A four-member team conducted the study in 2019-20 and published the findings as a book in June this year.

"It is a landmark document," Astrid Lobo Gajiwala, a laywoman theologian who coordinated the webinar, said of the book. "For the first time, we have hard data that cannot be discounted. Women religious from across India have courageously called out the exploitation they experience in the church." 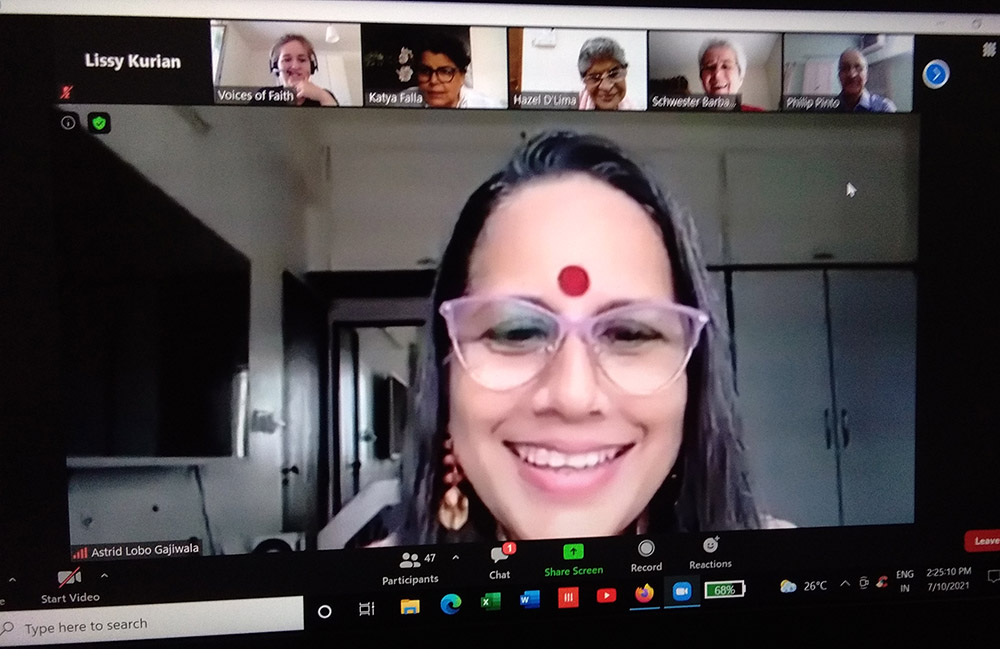 The book lists these problems faced by the Indian nuns: low wages, disputes over property, harassment from priests, refusal of sacramental celebrations, and verbal abuse in person and from the pulpit.

The issues discussed in the book were earlier discounted, Gajiwala says, lest they invite "the wrath of powerful priests and bishops," adding the concerns "are finally out in the open."

The India conferences of both bishops and religious have not responded to the survey or its findings.

The 86-page book titled It's High Time: Women Religious Speak Up on Gender Justice in the Indian Church, was written by a three-member team led by Sr. Hazel D'Lima, former superior general of the Society of the Daughters of the Heart of Mary.

The team contacted about 500 women major superiors and persons of influence in different women's religious congregations in India. "Only 121 people replied. A 25% sample is good enough for an exploratory survey," D'Lima told the webinar.

Sr. Noella de Souza of the Missionaries of Christ Jesus, a member of the survey team, said the book speaks of the economic, spiritual and sexual abuses women religious face in the Indian church. 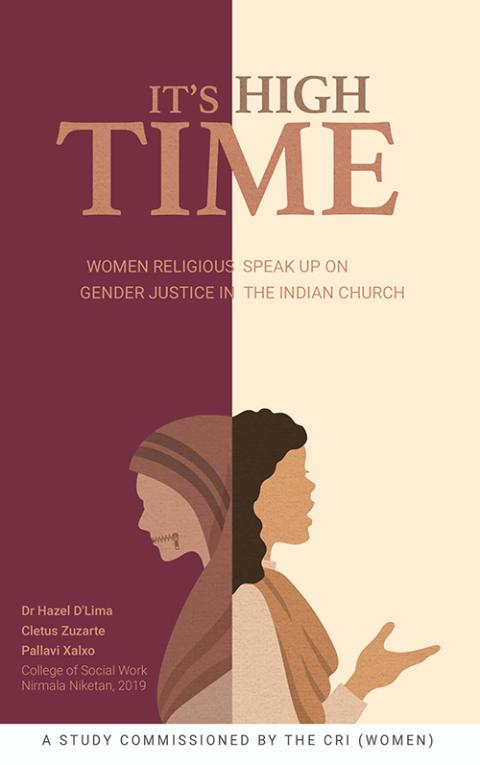 The cover of "It's High Time: Women Religious Speak Up on Gender Justice in the Indian Church" (Courtesy of Noella de Souza)

India has more than 103,000 members in 292 women religious congregations, according to the conference of religious directory.

De Souza said they were told that bishops were not happy about the survey. "Later, the executive commission of [the Conference of Religious India] seemed plagued by fears and withheld their consent to publish the study," she explained.

"Towards the end we had to seek legal counsel to reassure ourselves that we could and should get it printed and, more important, disseminate the study to all the respondents and bishops in the country," De Souza said.

The study was "almost silent" about clergy sexual abuse, she said, "because the respondents were major superiors and not the sisters in the field."

The webinar, she said, was organized to take the book's message further. "Being the first study of its kind, we were keen to know the issues that mattered to our sisters, and their feelings about the working relations in the mission," she explained.

She expects the participants to take the message to their congregations, dioceses and bishops.

Br. Philip Pinto, who wrote the book's preface, endorsed the study. "I have sat in silence as individual sisters wept through telling their stories. Enough! It's high time. ... This is now the call for action," asserted the former superior general of the worldwide Congregation of Christian Brothers. Pinto was a panelist in the online forum.

D'Lima said women religious expect priests and bishops to understand and respect their role in the church's mission. Instead, sisters "face a sense of rivalry and fear to dialogue. Too many demands are made on them," said D'Lima, who once headed the women's section of the India conference of religious.

She said the lack of understanding and respect from the priests makes the mission difficult for women religious. Priests don't have a sense of shared planning and execution of tasks in the church's mission, D'Lima said.

"Dialogue often leads to hostility between priests and women religious," she added. 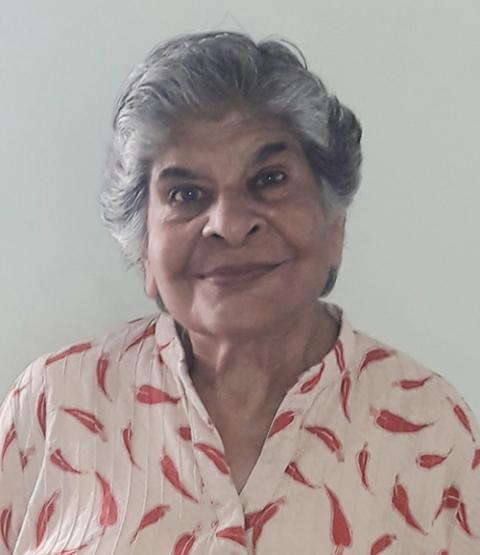 Sr. Hazel D'Lima of the Society of the Daughters of the Heart of Mary led the recent study on the status of women religious in India. (Courtesy of Hazel D'Lima)

The researchers spent months analyzing the data, reflecting on each response and the message it sought to convey, D'Lima said.

According to the respondents, working relationships are most important in their mission to build confidence, understanding and encouragement. They expect priests and bishops to respect and appreciate their efforts, potential, and their religious and community life.

The book says nuns who work in church institutions are among the lowest-paid employees. Those working in sacristy or preparing for liturgy get no payment. Around 47 of 174 dioceses in India paid low wages to nuns. The hierarchical response has been that nuns are "collaborators" in the church's mission.

"Women religious are considered less than other laywomen when it comes to their service in parishes, although they are qualified and do equal work. They are offered a paltry sum for their full-time services," De Souza said.

Land has become a "bone of contention" in the church, with some religious going to civil courts to resolve their disputes with dioceses.

Pinto said dioceses bully and intimidate women religious since they hesitate to go to court for redress of their grievances. He wants the religious, especially women, to pay greater attention to their initial contracts with dioceses.

"The church is not just the hierarchical church. We are the church. The diocese is not the only element of the church in mission. All of us are players in the field and this needs to be acknowledged and provided for," said Pinto.

Women keep the church alive, he asserted. "If women stopped going to church, the church would die — no matter how many men line up for ordination."

Another problem is sacramental blackmail, or a priest's refusal of sacramental celebration to sisters. Some priests use their power arbitrarily when they refuse to celebrate Mass in the convent chapel or they take away the Blessed Sacrament from there. 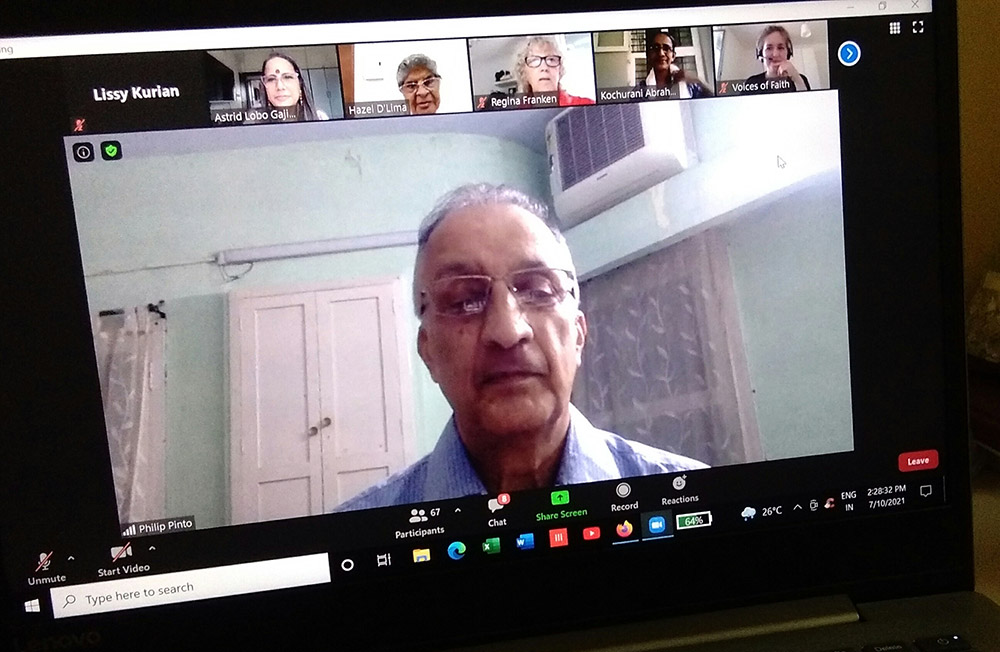 Christian Br. Philip Pinto addresses an international webinar held July 10 to explain the findings of a study on the status of women religious in India. (Lissy Maruthanakuzhy)

Most survey respondents said priests refuse to say Mass when the sisters do not comply with their demands. Normal expectation is that the priest would celebrate Mass once a week in a convent. "However, there have been instances where the Eucharist was not celebrated even for months," says the book.

"Such abusive behavior can be stopped only by refusing to tolerate it," said Pinto. "Like Pope Francis who allowed a cardinal to stand trial for fraud in the Vatican, we must not be party to abusive behavior. That is transparency and a sign of change," he added.

She regrets that many nuns stop their spiritual and emotional growth when they join the convent. "What are we doing to our young recruits? And this comes to the question of formation."

De Souza said the religious congregation should focus on human development while training their new members.

"We should train our young sisters in legal and human rights, theology, feminist theology, prophetic call and mission," she stressed. The young nuns should be taught relevant church documents, emerging trends in spirituality and religious life, and feminist interpretation of the Bible, she added.

She agrees the task ahead is immense. "We need to conscientize our sisters and our hierarchy and be firm that we shall decide our own future and our involvement in the Indian church by and for ourselves. We are adult enough to manage ourselves," she said.

D'Lima wants the nuns to choose service instead of servitude. "The important thing is to dialogue with those who tend to impose on us, making known our stand with confidence and conviction leading to collaboration, rather than an either-or situation."

She cited her own experience when she was superior general of the Society of the Daughters of the Heart of Mary. An apostolic visitor was sent to them "for reasons which I did not know. He was supposed to examine the governance of my congregation and I had to defer everything to him. But I did not."

She was summoned to the dicastery in Rome several times to undergo questioning about her governance. "I did not engage any lawyer but honestly answered whatever I was asked to clarify. I suffered a lot through it, but in the end I not only completed my term as superior general but was elected for a second term."

She said the experience convinced her that one does not have to say yes to everything.

"I was able to take the fight to the Vatican, and I believe God's grace was there to help me. Your conviction in what you are doing and your faith in God will give you the courage to act and be independent. The Spirit is one of us. She inspires women as well."

Pinto encouraged the forum: "The women religious of our time cannot allow a church in dire need of reform to continue in its broken state. They have to speak up."

This story appears in the Abuse of sisters feature series. View the full series.