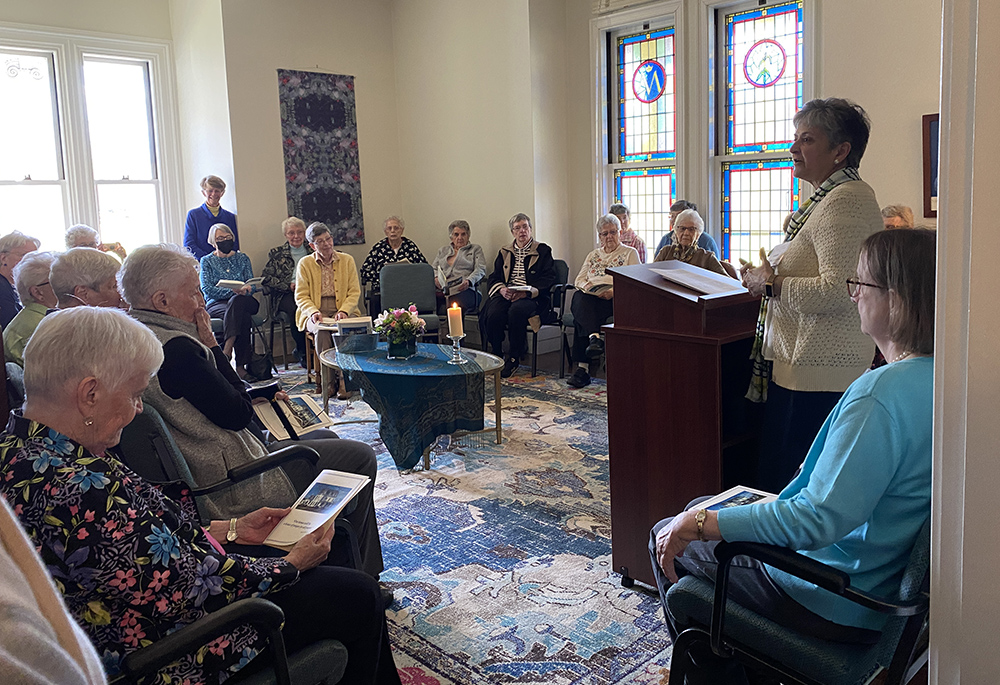 Sr. Pamela Falkowski, the province leader for the Cenacle Sisters, walked through the congregation's empty retreat center in Chicago in the early days of COVID-19 lockdown in March 2020.

Since 1967, the Chicago sisters had shared their home with those on retreat. The complex in the Lincoln Park neighborhood had two towers, one for the sisters' rooms and the other rooms for overnight retreat-goers.

But now, there was only the sisters, and they were on lockdown, too.

In those first days, Falkowski especially noticed "the absence of people. We were founded for retreats in 1826 — that's our life."

As the nation went into lockdown, sister-run retreat centers sat empty. Whatever income they brought in disappeared, but the costs of maintaining them did not. Larger communities and retreat centers with more resources were able to weather the storm. Some, like the Cenacle Retreat and Conference Center, could not.

Falkowski said the pandemic hastened changes already taking place for the little community. In 2017, Hurricane Harvey leveled their retreat center in Houston, and the sisters did not have the finances to replace it.

They sold the Houston land in 2018 and closed their retreat center on Long Island in New York in 2020 partly because of the pandemic. A year ago, they closed the Chicago center, their last one.

Read this next: How COVID-19 impacted congregations with retreat centers

"As much as I would have loved to keep one of them open, who would be around in 10 years to close it?" Falkowski said.

There are about 40 Cenacle Sisters in the United States, and 23 of them are over age 80. Half of those over 80 are in nursing care.

The Felician Sisters in Chicago had extra space in their convent just a few miles away, so the Cenacles sold their home and moved in with the Felicians. The Lincoln Park complex has since been demolished. Ten of the sisters moved into an independent living center that is home to 500 seniors and are learning new ways to minister to their neighbors.

Falkowski said the move has been a big change, and "we don't exactly know what God is doing, but we're here, and we're being as faithful as we can to our charism and our mission."

And now that the Cenacle Sisters live with the Felician Sisters, "we're giving witness to other religious congregations about how we can collaborate with one another," she said. "We're still learning, which is quite wonderful."

No one knows how many retreat centers closed permanently because of the pandemic. The common belief seems to be there were many; however, experts say it was probably no more than a handful.

The idea that the pandemic caused many closures may be because so many were already losing money before the lockdowns, said Ben Scott-Brandt, program director of the Retreat Center Collaboration, a resource group for retreat centers, many of which are ministries of Catholic sisters.

Scott-Brandt said he knows some retreat centers closed but only personally knows of three or four.

"There is such a fear of closure. For very financially vulnerable organizations, the fear of closure is great and ever-present," Scott-Brandt said. "So when some do close, they assume there are many more, as well."

However, the pandemic is not yet over, and things have not returned to normal. 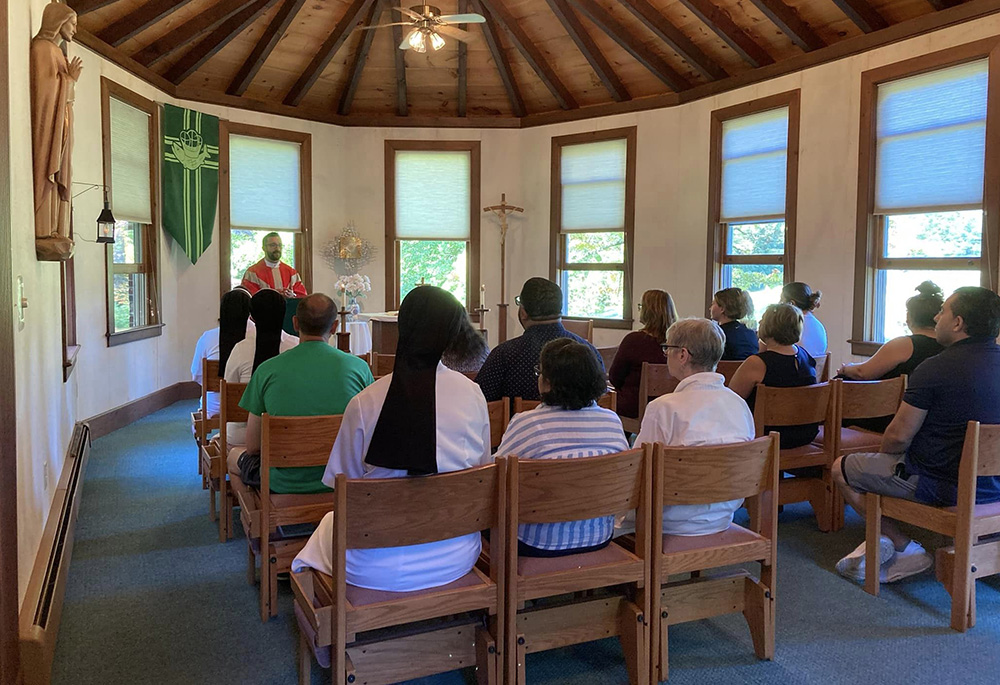 Retreat-goers gather Aug. 24 in the chapel at Sacred Heart on the Lake retreat center in Connecticut. The chapel was designed to match the other buildings on the grounds, which originally held a factory built in 1820. (Courtesy of the Apostles of the Sacred Heart of Jesus)

The Sisters of St. Joseph of Boston had to close their St. Joseph Retreat Center in 2016. Even though it had been doing well, the building was more than 100 years old and needed millions of dollars in renovations.

Just a few years later, another building the congregation owned nearby became available, and their new spirituality center, St. Joseph Spiritual Ministries, opened in January 2020, just before the lockdown began.

In March 2020, "they pivoted," said Sr. Joanne Gallagher, the order's director of communications. "They did things online. They Zoomed things from our chapel. We created a section on our website for prayers during the pandemic."

Gallagher said while their new center couldn't operate in the normal sense until September, the sisters found a bigger need than ever for people to connect with their spirituality.

"It's a spiritual ministry — it doesn't have overnight beds. But we could reach out to people in the neighborhood," Gallagher said. "It lets us reach out to the dear neighbor without distinction so they can deepen their relationship with God. You can't put a price tag on that."

And thanks to the online options, the little ministry — the building can only host, at most, 20 people — sometimes draws people from around the world.

"We know there's a hunger for a deepening relationship within people, in our whole society," Gallagher said. "It's so much more than just offering prayer services or a retreat." 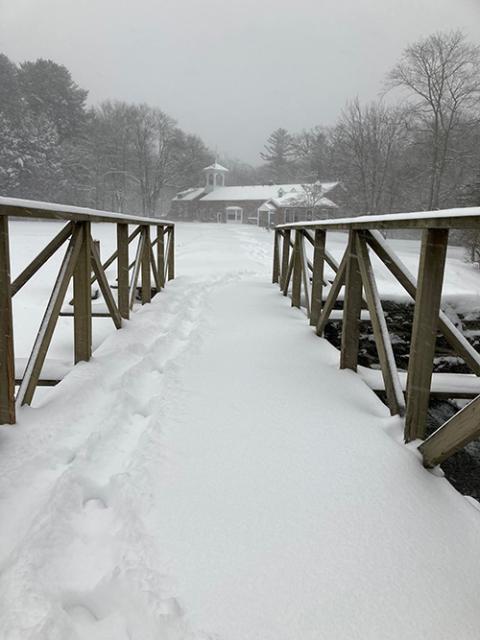 That hunger spurred the Apostles of the Sacred Heart of Jesus in Connecticut to start a retreat center during the pandemic.

"We tried before, and it hadn't caught on," said Sr. Lany Jo Smith, director of the order's Sacred Heart on the Lake Retreat Center. "But we started doing little things: reaching out to people in the area, going to different parishes in the area. Little by little, we've established a ministry here."

Although the ministry started in-person events in 2021, it is still small. There are day retreats for laypeople, but overnight retreats are only for religious. However, they host a steady stream of prayer groups, book studies, and daylong and confirmation retreats.

"There's definitely a hunger for it," Smith said. "The book studies fill up immediately."

The Sisters of Bon Secours saw that same hunger during the pandemic. Even though their Bon Secours Retreat and Conference Center in Marriottsville, Maryland, closed its doors temporarily in March 2020, people kept showing up and walking the grounds, finding peace and comfort on the sisters' 300 acres.

"Retreats weren't our original ministry — we were all nurses," said Sr. Elaine Davia, the Bon Secours' leader in the United States. "But there's a need for spirituality probably now more than ever, and people need a place where they can come and experience God, whatever their faith is. ... We were founded for the salvation of souls through the care of the body. We say we're now helping people come to wholeness."

Kevin Cassidy, the Bon Secours retreat and conference center director, was struck by the sudden stop the pandemic caused. There were no public or private retreats to sponsor and no conferences to host, and the 70 private lodging rooms were empty. Most of the staff was sent home; those who were left worked whatever jobs needed done.

"At the end of 2019, we were rockin' and rollin'. We knew what we were doing, we were confident, we knew we had a good product. We had people almost fighting to get in here," Cassidy said. "We took it on the chin." 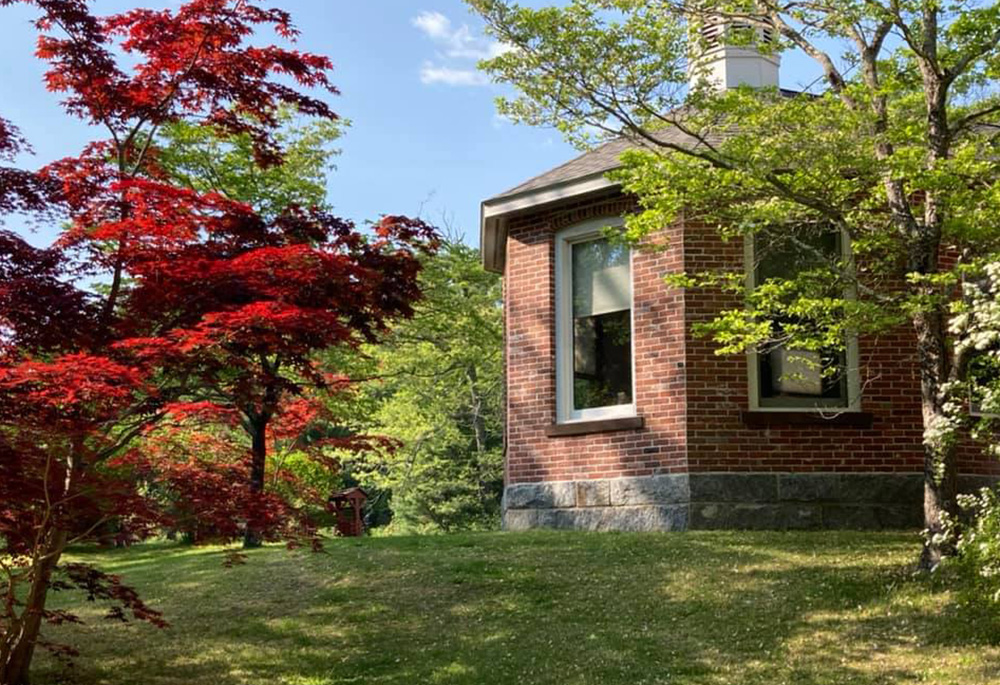 The Sacred Heart on the Lake retreat center is on 46 wooded acres in buildings that were originally used for a factory and built in 1820. (Courtesy of the Apostles of the Sacred Heart of Jesus)

Although the arrival of guests stopped, the work did not. Cassidy said there was planning for how to handle food service and housekeeping once they reopened, and the team had to develop new policies and procedures then change them when there was new guidance from the Centers for Disease Control and Prevention, the state, or the diocese. Staff figured out how to host online events and then hybrid events, in which an online audience can join the in-person attendees.

After four months of closure, the center partially reopened, mainly hosting small, sponsored retreats that had restrictive procedures on masks and social distancing for attendees. That provided a small bit of income, Cassidy said, but the costs were almost entirely borne by the congregation.

The Sisters of Mercy in the Americas have 11 retreat centers in the United States, and all survived the worst of the pandemic by pivoting first to online events and then to hybrid events.

"Combining both in-person and bringing in people via Zoom — I think that is going to be the future," said Dawn Stringfield, executive director of the Mercy Conference and Retreat Center in St. Louis. "Our numbers have picked up, especially this fiscal year, which began July 1. We're back to pre-pandemic levels."

Going virtual has meant that the Cenacle Sisters can live out their founding charism by hosting online retreats even though they no longer physically have a retreat center.

Mark Piper began as the Cenacles' retreat center director in June 2019. Nine months later, the retreat center was closed for the lockdown, and no one knew if it would reopen.

Three months into the pandemic, when it became clear it would not be ending anytime soon, they began hosting virtual events. And while there will no longer be in-person events, the virtual ones will continue.

"My role has changed as we have changed," Piper said. When the lockdown started, "I said, 'Don't start planning the funeral rites. Life has changed, not ended.' I was maybe too optimistic."