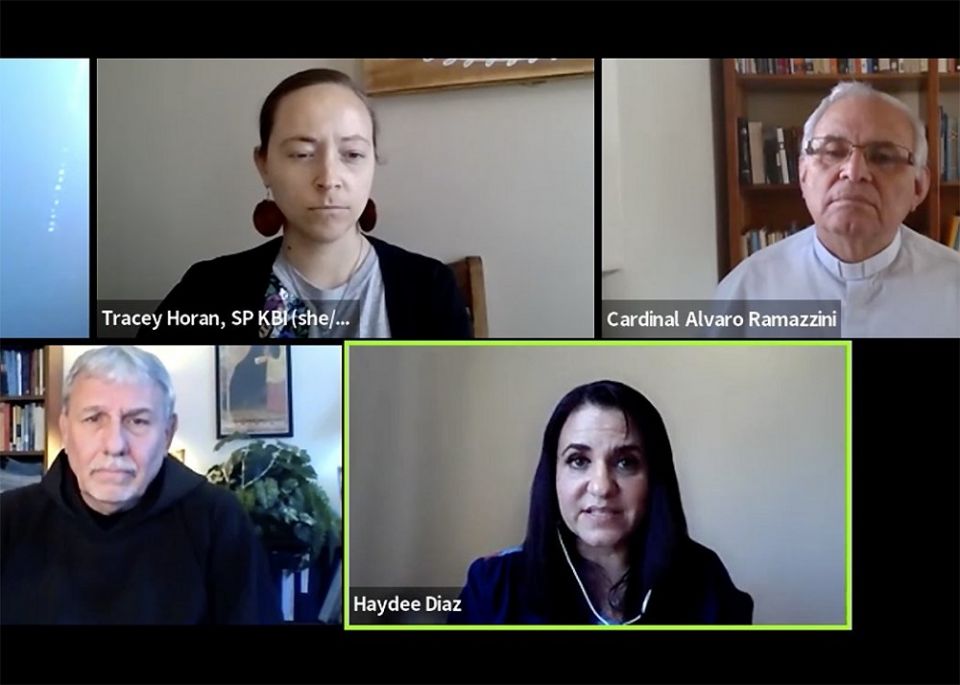 Panelists for a Jan. 31 dialogue on "Listening at the Border" during the Catholic Social Ministry Gathering. Clockwise from top left: Sr. Tracey Horan, a Sister of Providence of St. Mary-of-the-Woods in Indiana, who is associate director of education and advocacy for the Kino Border Initiative; Cardinal Álvaro Leonel Ramazzini Imeri of Huehuetenango, Guatemala; Haydee Diaz, Catholic Relief Services country representative for Honduras and the Caribbean zone; and Capuchin Franciscan Fr. David Couturier, assistant professor of theology at St. Bonaventure University. (CNS screenshot/Courtesy of CSMG)

Washington — Sr. Tracey Horan had a confession to make.

"When I was in high school, I was actually advocating to build a wall at the U.S.-Mexican border," Horan said. Then she met an immigrant family, "and I found out it wasn't as simple as I thought," she added.

"It often starts with a relationship," said Horan, a former Global Sisters Report columnist who is now associate director of education and advocacy for the Kino Border Initiative in Nogales, Arizona, and across the border in Nogales in the Mexican state of Sonora.

Horan was one panelist for a Jan. 31 plenary session during the Catholic Social Ministry Gathering, "Listening at the Border."

"I have seen firsthand so many stories of brothers and sisters," said Cardinal Álvaro Ramazzini Imeri of Huehuetenango, Guatemala, another panelist. "Stories of success and failures. Stories of pain and sadness."

Meanwhile, they have a sense of "it looks like everyone's getting in" but them, added Horan, a member of the Sisters of Providence of St. Mary-of-the-Woods in Indiana. "But they do not let that be an excuse to give up. ... Migrants express a lot of hope."

Capuchin Franciscan Fr. David Couturier, a psychologist and psychotherapist by training, did another kind of listening: what former President Donald Trump was saying in his speeches.

"The reason I did," said Couturier, an assistant professor at St. Bonaventure University, "is that what Donald Trump was saying of migrant children was an assault on their development, and giving people a new model of what childhood should look like," with loaded words like "diseased," "danger" and "terror."

Listening to God can bring one —"Christians in general, Catholics and non-Catholics" — to advocacy, Ramazzini said. "The duty to advocate — in a sense, to protect and accompany migrants, finds its foundation in the words of our Lord Jesus Christ" in Matthew 25: 35-40, about inviting in the stranger, or welcoming the "migrant," as he paraphrased it.

"It ensures I can hear the words of the Lord," the cardinal said.

Heeding the words of Pope Francis also is valuable, according to Ramazzini.

"The Holy Father had spoken about strategy, combined with bold action, welcoming the migrants, protecting and promoting them," he said. "This is strategy for all believers in Christ, Catholics or non-Catholics: welcoming."

Horan, who grew up in Indianapolis, said, "We know there are migrant families all over." After her high school episode about wall-building, she became a community organizer and found that "just down the street from where I grew up there was a migrant community."

Horan said, "We have a number of parishes and schools across the U.S. that have decided to adopt an asylum family. Once you're in a relationship, you begin to ask questions: 'Why can't this family come in?'" It leads to asking also, "What difference can I make?" she said.

She recounted when there were a number of immigrant families who wanted to approach a port of entry and seek asylum. She invited Americans to accompany them on a march to request asylum at the border.

"The U.S. ended up rejecting all 25 families, but those [American] people went back to their communities and started advocating," said Horan, who entered her religious order in 2014.

The first step to advocacy is "just talking to the people around us. We all have friends, family members, colleagues that we work with," she said, and by talking with them, one would be "surprised at how much confusion there is" about immigration policy and immigrants' realities.

Contrary to the notion held by some that, once in the United States, immigrants skip out on court dates, Horan said, "It's in their best interest to show up for court hearings," and 90% of them do.

Ramazzini said appeals should be made to the consciences of business leaders who engage in exploitative practices. In Guatemala, he said, workers at banana or coffee plantations or in gold and silver mining are badly exploited, but the top managers, themselves Guatemalan, are primarily Catholic.

Couturier made a case for "a consistent policy that is developed as a legislative compromise not subject to radical change every time a new president comes in. We can't leave immigrants subject to that kind of instability and volatility."

If anyone has looked, Couturier added, "we have allowed our border communities to become places of disinvestment. ... They have become some of the poorest places in the United States."

Good Friday hope bridges pain and love at the border