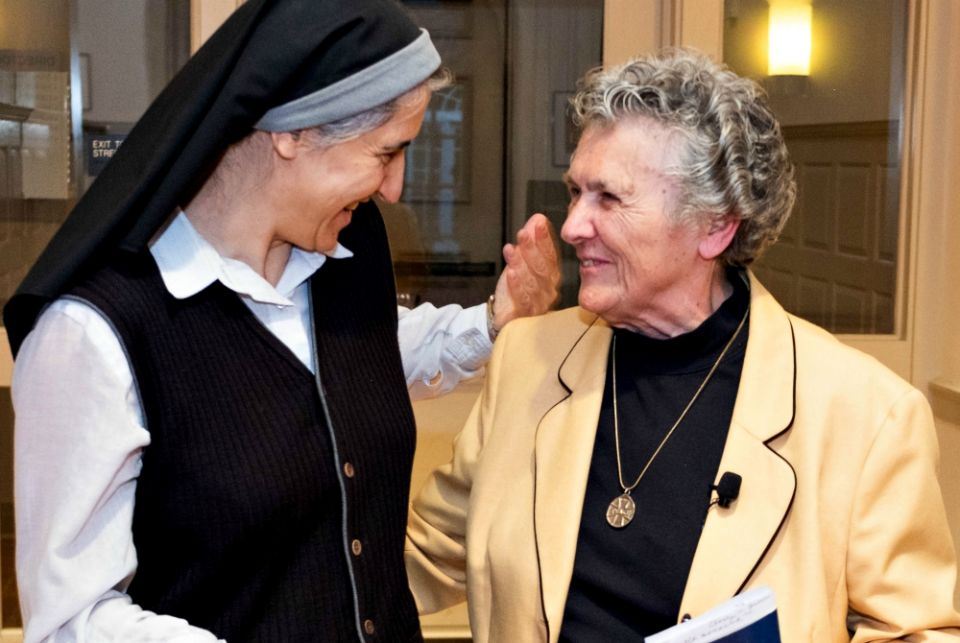 Washington — Memory was at the core of an Oct. 11 exchange between two prominent Benedictine sisters both known as radical thinkers in their circles — Sr. Joan Chittister, 83, and Sr. Teresa Forcades, 53 — at All Souls Church Unitarian in Washington, D.C., for a fundraising event hosted by the Women's Ordination Conference titled "Radicals and the Rule."

As a young scientist in the early 1990s, Forcades was taught that DNA's three-dimensional double-helix structure is called the "Watson and Crick model" for the two men who apparently discovered it: "That's James Watson and Francis Crick, two names."

Forcades later learned it was actually a woman, Rosalind Franklin, who discovered the shape of DNA in the 1950s, years before Watson and Crick. But Franklin's name — a woman's name — was left off the model's official title.

"In 30 years, the science had forgotten her," said Forcades, a Catalan physician and theologian known for her public health social activism and views on feminist theology.

The Catholic Church, by contrast, has preserved the memory and history of women going back thousands of years in a way that "no other institution has done," Forcades said. In China, for example, where is the history of women from, say, the 12th century? Who are these women? Of course, women in Eastern cultures had important social initiatives, Forcades said, but their records have disappeared.

The church is struggling to move forward to address the oppression of women, Forcades acknowledged. Nevertheless, "every day, the church is placing in front of my eyes [an example of] a woman that is highly honorable —"

Chittister jumped in before Forcades could finish the thought.

"Maybe you're being bought off," Chittister said.

"Maybe it's one of the cleverest sexist tricks," Chittister said, then shared a story, and memory, of her own.

As an 8-year-old in Catholic school, Chittister used to go to the nearby church every night after school and stand in front of its stained-glass windows, "looking for a woman."

"Here is an institution that has preserved great women for over 2,000 years — the kind that created you and me, the kind that gave us a model that there was another place to go and another way to think," Chittister said.

"But at the same time, I have to ask: Why is it that the institution that has saved the memory, the work, of the strongest women in history for 2,000 years is not the church that recognizes this membership of these women?" she asked.

'The ideal of human life is sanctity, and that has always been open to women.'

The two sisters, who had not met before this event, wasted no time diving into the complex subject.

"Modernity began with the exclusion of women," Forcades said.

In "modernity" — the phrase she used to describe the post-Renaissance period of history that continues to this day — human reason was made out to be the highest "ideal of human life." From modernity's outset, Forcades said, women were excluded from pursuing this ideal because they were barred from receiving an education and attending university.

While reason is the ultimate ideal for secular society, Forcades made clear that the church has never said that the ideal of human life is the priesthood, which only men are allowed to attain.

"The ideal of human life is sanctity, and that has always been open to women," Forcades said, though she also mentioned she supports the Women's Ordination Conference and will continue to advocate for women's ordination to the priesthood.

Before turning it back over to Chittister, Forcades questioned if the best way to address the Catholic Church's sexism is by casting stones at the institutional church from a perspective that the society outside it is more welcoming to women.

Forcades was right, Chittister said, that the goal of humanity is sanctity. However, "who defines what that sanctity is?" Chittister asked. "Nobody said that everybody had to be a bishop ... but at the same time, they did manage to define that being a bishop or a priest reconfigures my ontology, my kind of being.

"The minute you begin to preach of higher vocations — and one has an ontology that the other can't have — there's a configuration of radical irrationality, and to that, we must keep speaking," Chittister said.

The need for women to speak out against sexism was a point Chittister made many times throughout the event.

"Our greatest challenge is to start getting these ideas out," she said. "Where do we get these definitions of women, and how do we know they're true? Because men defined them and told us so."

Over the course of their 90-minute discussion, Chittister and Forcades examined a number of ways the manipulation of memory and language continues to oppress women.

"We ought to stop calling the church 'the church' unless we understand what it means," Chittister said. She said "the church," which means "an assembly of all worshipers," denies full membership to women because of "bad theology built on bad biology."

'If women can't claim as much as a pronoun in this church, you'll never claim the diaconate.'

Men's social superiority can no longer be justified because of their supposed superior role in creation, she said: Science has proven that false.

"It's basic biology, as far as I'm concerned," Chittister said.

Both speakers said the path toward equality is for women to define themselves and their own relationships.

This could be at the parish level, where Chittister pushed women to make clear to their priests that "the Jesus story is my story, too," and demand nonsexist language be used on Sundays.

"If women can't claim as much as a pronoun in this church, you'll never claim the diaconate," Chittister said.

For Forcades, self-definition can even begin with daily prayer. Prayerful silence, with open space to ask yourself how you want to live, is similar to the notion of literacy, she said. 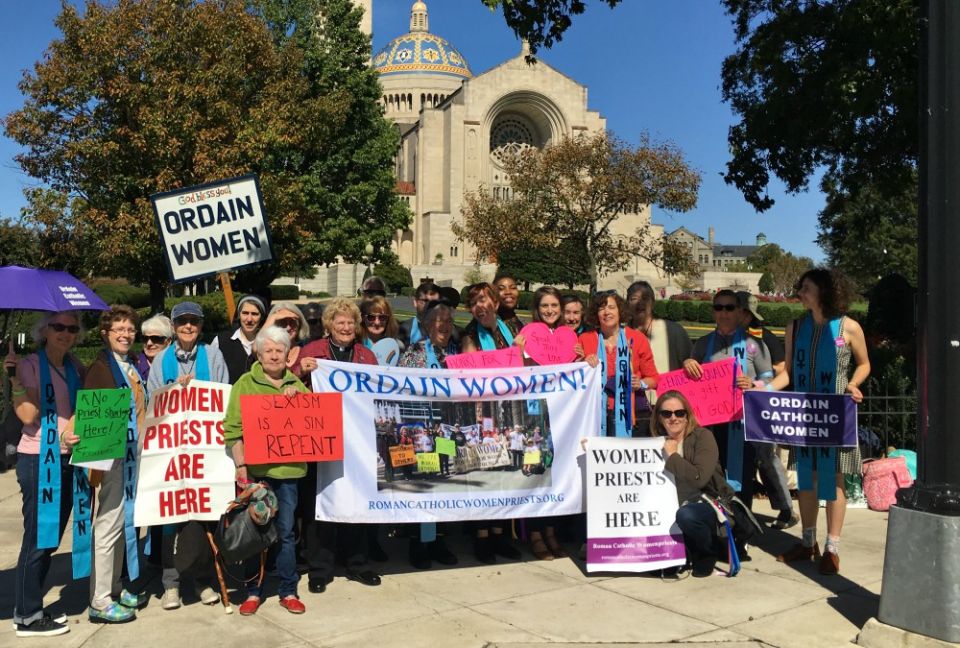 Activists rally in support of women's ordination Oct. 11 in front of the Basilica of the National Shrine of the Immaculate Conception. (GSR photo / Jesse Remedios)

Earlier that day, Forcades attended an event where a group of activists spoke their own truths in front of the Basilica of the National Shrine of the Immaculate Conception and in memory of an action by another champion for women's rights. At 12:30 p.m., the Women's Ordination Conference hosted a rally to commemorate the 40th anniversary of Sr. Theresa Kane's call to Pope John Paul II on Oct. 7, 1979, to include women in "all ministries of our church."

The group of women and men included people from D.C., New York, Pennsylvania, Los Angeles and even Rome. They honored Kane's words with songs, prayers and chants. Some held a colorful banner pointed toward the headquarters of the U.S. Conference of Catholic Bishops across the street. In all capital letters, the banner demanded, "ORDAIN WOMEN!"

Asked to speak at the rally, National Catholic Reporter columnist Jamie Manson told the group that few women get the opportunity to confront a pope publicly the way Kane did. Of those who did, all eventually became saints.

"My great prayer is that Oct. 7 someday will be Theresa's feast day," Manson said.

[Jesse Remedios is an NCR Bertelsen intern. His email is jremedios@ncronline.org.]

Read this next: Women in church leadership: 40 years after Sr. Theresa Kane's request to pope
A version of this story appeared in the Nov 1-14, 2019 print issue under the headline: Examining women's role .

South Carolina monasteries adjust to life under the pandemic

Breaking, and the hope of a new whole