What does a consolidation of sisters' communities look like?

Congregation of St. Joseph in US talks about evolution process 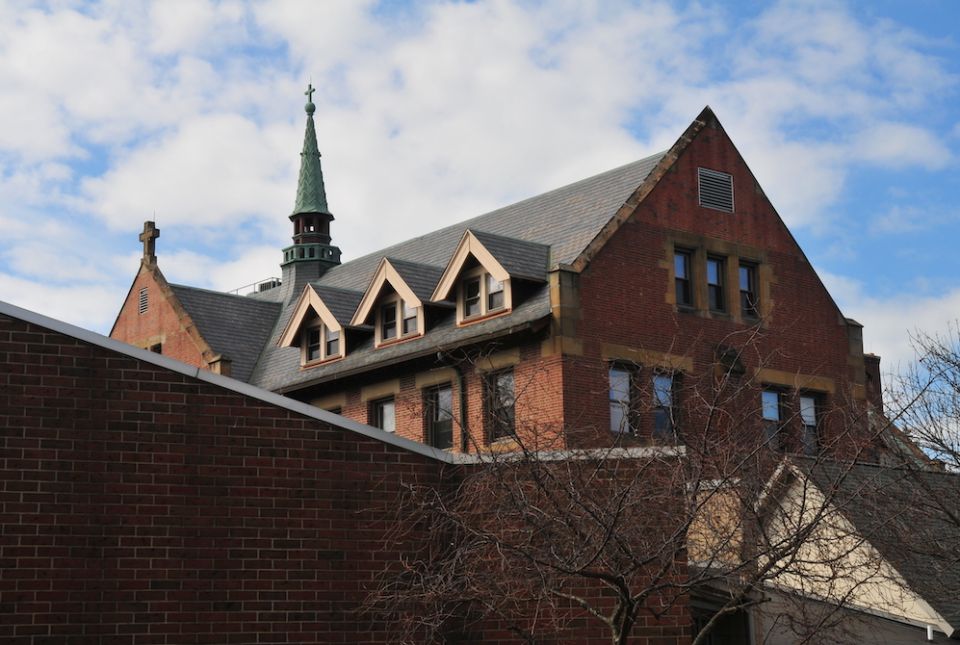 The Sisters of St. Joseph of Cleveland's former motherhouse is currently being used as a high school. (Courtesy of the Congregation of St. Joseph)

When seven congregations of Sisters of St. Joseph completed their consolidation into one new community in 2007, the sisters thought the work of the merger was largely finished. After all, it had taken nearly a decade to get to that point.

"I remember when we did this, thinking, 'We're done! We did it!' But we were not done," said Sr. Kathleen Brazda, part of the current leadership team for the Congregation of St. Joseph. "We're still evolving, still looking at structures."

Many communities of women religious are considering or have already begun changing their structures to meet their changing demographics and needs as members age and the number of new vocations drops. There are mergers, consolidations, shared administration and even shared governance. But those structural changes are not the end of the process, sisters say. They are really the beginning. 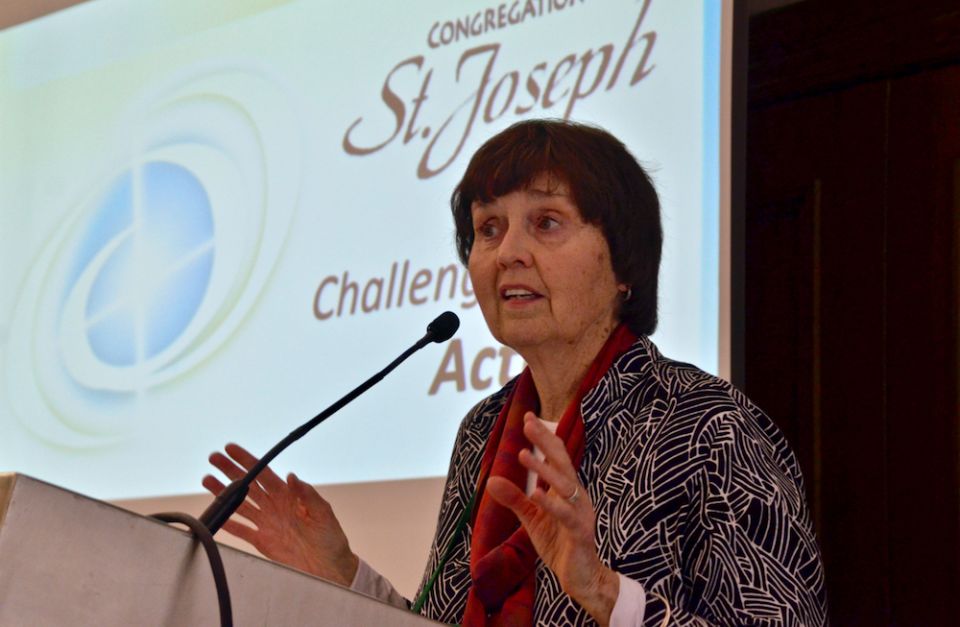 "When we brought all these wonderful things together, we also brought seven motherhouses," said St. Joseph Sr. Nancy Conway, who was on the leadership team at the time of the consolidation. "We had these very large buildings, and we said when we started this that those things would remain for the foreseeable future. Then we learned we were spending 69 cents of every dollar on the upkeep of buildings. And our carbon footprint was just" — she paused — "wrong."

And the sisters quickly learned the real estate market looks at things differently than they do. Motherhouses to sisters are historical edifices in a pastoral setting, but potential buyers see only huge, outdated and inefficient buildings in isolated or inconvenient locations.

The only motherhouse that was new was in Baton Rouge, Louisiana, which had been built after the provincial house in New Orleans was partially destroyed by Hurricane Katrina in 2005 and finished off by a fire in 2006.

The other motherhouses were either renovated to better meet their needs, or they were rented or sold and replaced. The one in Kalamazoo, Michigan, was torn down and replaced. This meant that, with one exception, the sisters largely stayed where they were instead of all moving to one location.

"Finding someone who has the capacity to take over these places isn't easy," Conway said. "The groups we're most interested in are nonprofits and church groups, but they often don't have the resources to take care of them — the same way we don't."

Upkeep of the Wichita, Kansas, motherhouse is now the responsibility of its renter, an Episcopalian group that helps immigrants and survivors of human trafficking. The Cleveland, Ohio, motherhouse is being used as a high school. New facilities much better suited to the sisters' current needs replaced both. And the site of the motherhouse in New Orleans is being turned into a massive water garden to address the city's flooding issues.

But one location — the motherhouse in Tipton, Indiana, about an hour north of Indianapolis — presented a problem: It was a huge, inefficient building in an inconvenient location. The sisters studied every possibility they could think of, but the only thing that seemed to make sense was to close it.

"I wish we had handled that differently," Conway said of the 2012 closure. "It was the only one we closed and asked the sisters to move. It was very traumatic. We thought we had no options, and it turned out [later] that we did. It was very costly for them, and healing took a long time."

It was especially hard for the Tipton sisters because it was their congregation that had suggested forming some type of union.

Left: Former Sisters of St. Joseph of Wichita, Kansas, motherhouse; right: Their newer facility. Upkeep of the motherhouse is now the responsibility of its renter, an Episcopalian group that helps immigrants and survivors of human trafficking. (Courtesy of Congregation of St. Joseph)

The seven communities had been part of a nine-member federation, so the sisters knew each other well. The Tipton sisters suggested seeing what they might accomplish together that they couldn't individually. The idea gathered steam; individual communities began considering it, and the federation weighed the proposal in 2001.

"There was no sense of urgency or panic," Brazda said. "It was a natural step to begin a conversation, and then the journey just continued." Instead of a reaction to declining numbers, "it came out of a sense of, 'We have more to do.' "

At the time, it was only about working together.

"We were not talking about a merger at first," said Sr. Marguerite O'Brien, who was in leadership at the time. "We were thinking more of a union. We never felt it should be small groups absorbed into a larger group."

But eventually, things progressed to the point where the seven planned to become one, and difficult decisions had to be made. The congregations voted on the idea at their individual chapters in 2005 and 2006; approval from Rome and the new institute’s first chapter came in 2007. 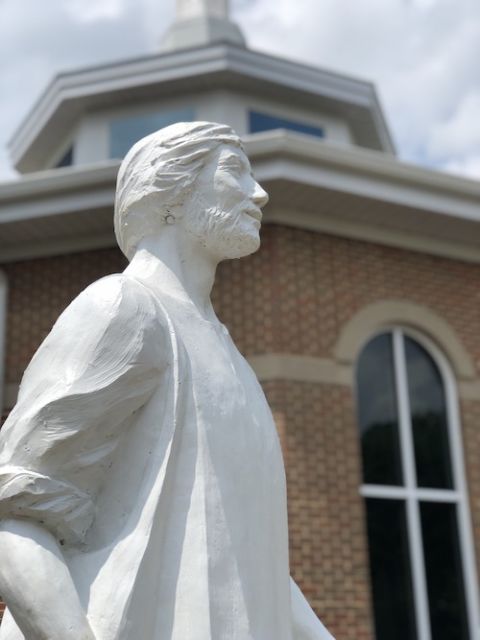 "First, we concentrated on building the relationships," Brazda said. "Then we looked at what our options were, and we chose to allow our founding congregations to die, and we would join a union of one as equals."

They would never feel equal if only some communities ended and were absorbed into another. But that meant letting go and choosing the unknown.

"For us to have a true union, our founding congregations had to die," Brazda said. "It was self-emptying love. It was dying for new life. I loved being a La Grange [Illinois] sister. There was loss. I don't deny that piece. But we would never be where we are today if we had not done it. The strength came in the union."

Conway said she still gets goosebumps thinking about it.

"It was just the magnitude of what we were doing without a lot of guarantees," she said.

The vote was not unanimous in every congregation, but in some communities, even the sisters against the idea voted yes, saying it would only work if everyone was on board.

"I can still picture when the sisters who were opposed to it got up and said yes," Brazda said. 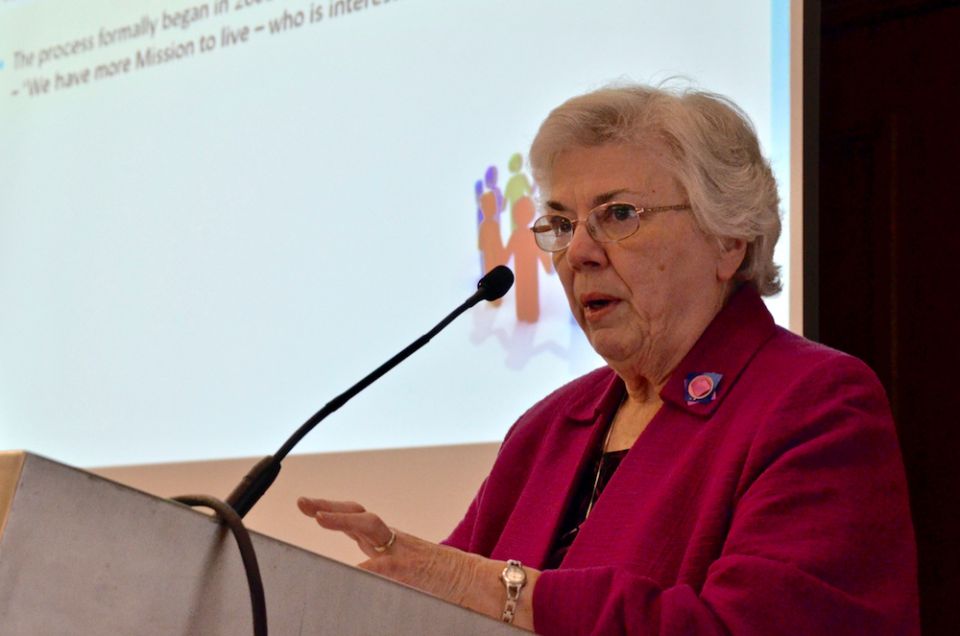 O'Brien said they took care to especially include the sisters who were afraid of or opposed to the idea to make sure they were part of every conversation and decision.

In retrospect, she said, that collaborative effort also should have been made in the decision to close Tipton.

"We announced the decision. We didn't engage them in the decision to the degree we did in other situations," Conway said.

O'Brien added: "We made a lot of assumptions that hurt people, and I regret that," but "we didn't see any other way to do it."

After the decision was made to close Tipton and to examine all the other locations, the sisters brought in a consultant in 2012.

"We were very clear in what we wanted to do," Conway said. "We just didn't know how to do it."

The consultant helped the sisters decide what kind of spaces they were looking for and how to meet their needs in the future. The motherhouses in Wichita, La Grange and Kalamazoo are licensed as assisted-living facilities, and the one in Cleveland will be soon. Wichita is also licensed for skilled care; Wheeling, West Virginia, and Baton Rouge are being considered for assisted living.

Brazda said one of the best decisions they made was forming a company, CSJ Initiatives, for property management and to run the assisted- and skilled-care facilities, a venture that has been so successful, other congregations have hired the company, as well.

"I can't imagine what it would have been like during this pandemic if we hadn't had their expertise in health care management," Brazda said. "With the different regulations in each state, the best way to prevent infections — to have the management company taking care of that was a real blessing."

A 'Journey of Oneness'

The sisters say the benefits go beyond the economic and administrative.

"It's a lifeline for us to have this wider relationship," O'Brien said. "It stretches us beyond the provincialism you have when you're small."

That has been the experience of other congregations that have consolidated, as well.

In the 2000s, the 17 congregations consolidated into six; in July 2019, those six were canonically absorbed into the new institute. (The Religious Sisters of Mercy of Alma, Michigan, is the only Mercy congregation in the United States not affiliated with the institute.)

"While the initial coming together to form the institute did occur in 1991, the years since that time have been ones of deepening relationships and continued discernment regarding how best to express our identity as Sisters of Mercy," Sr. Patricia Flynn, vice president of the Sisters of Mercy of the Americas, wrote in an email to Global Sisters Report. "Our guiding question has been, 'How do we want to be for one another now — and for our suffering world?' "

And, like the St. Joseph sisters, the Mercy sisters found their whole is more than the sum of their individual parts.

"While the administrative changes have resulted in a better use of human and financial resources, we have come to recognize that our Journey of Oneness is more than a pragmatic response to demographics," Flynn wrote. "It is part of the yearning for oneness felt by all creation and all people — and that our own journey can witness the possibility of unity to a world marked by alienation and conflict."

While both congregations' journeys were long, both found that patience paid off.

After a long, difficult process, the Congregation of St. Joseph was able to sell the Tipton motherhouse to the Diocese of Lafayette, Indiana, in 2016. The diocese stretches border to border across the state; the Tipton location is a sort of outpost that makes serving the eastern half of the diocese much easier.

Since most of the sisters did not move and the leadership is spread out instead of centralized, day-to-day life hasn't changed much, and Conway said the union of equals they created mirrors the universal church.

"It's local-ness and congregational-ness," she said. "Each of our women lives someplace and works someplace, but they're also part of this larger thing. We didn't give up being local when we became one congregation."

Religious Life | What does a consolidation of sisters' communities look like?

A backwards glance at life from wartime

Q & A with Sr. Maria Cimperman, director of Center for Consecrated Life