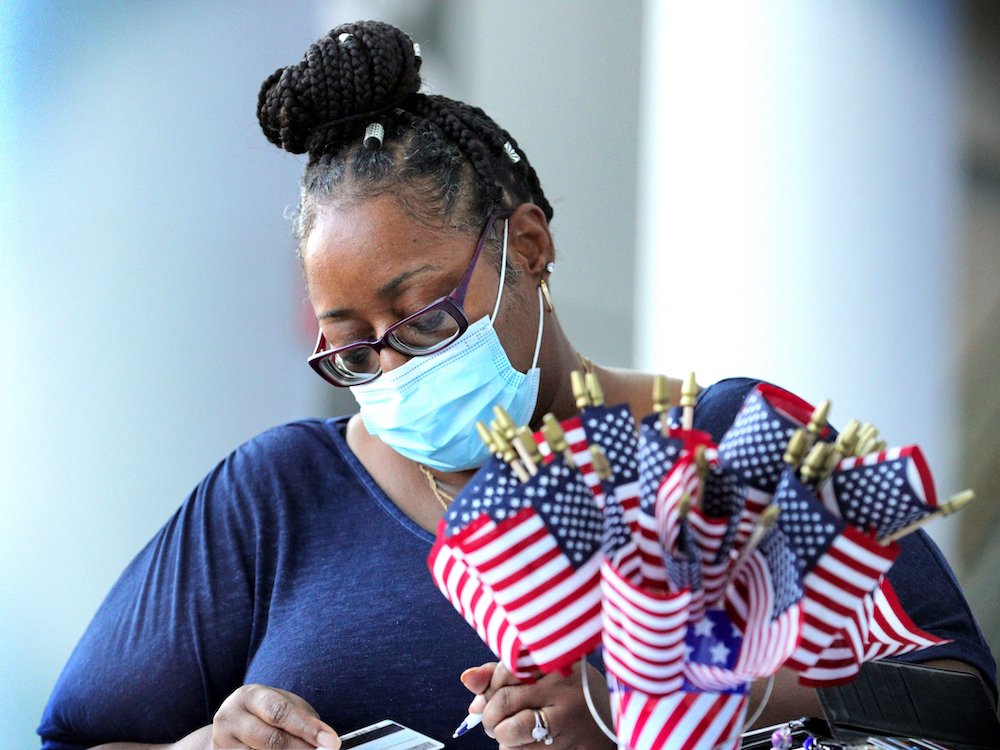 Having her volunteers register voters three days a week for the last two months in Youngstown, Ohio — not to mention the training and preparation beforehand — has been a lot of work, but Humility of Mary Sr. Ann McManamon said it's worth it.

McManamon is director of the Dorothy Day House of Hospitality in Youngstown, where volunteers dress up in red, white and blue, set up a table on the sidewalk outside the center, and register everyone they can. The house offers evening meals, access to a safe place and a shower and community — and now the opportunity to register to vote.

"We're doing this [voter registration] as our big action, and it's the right action," said McManamon. "It's amazing the people who stop who have never voted."

McManamon is just one of many Catholic sisters across the United States who are working to ensure citizens are able to exercise their right to vote. They work for legislative changes to make voting easier, they register voters and they work the polls on Election Day.

Sr. Marie Lucey, a Sister of St. Francis of Philadelphia, is one of those working to get out the vote. She's the associate director of Franciscan Action Network, which made three videos this year to encourage people to vote.

"We don't have a good history of voting in this country," Lucey said. "We either take too much for granted, or people think their vote doesn't count. But voting is a right and a responsibility."

She said it's easy to see the divisions in society, in politics and even in the Catholic Church and be discouraged, but that should not deter voting.

"Pope Francis says how important it is for people to be involved in politics," Lucey said. "He said very clearly we have a responsibility to vote." 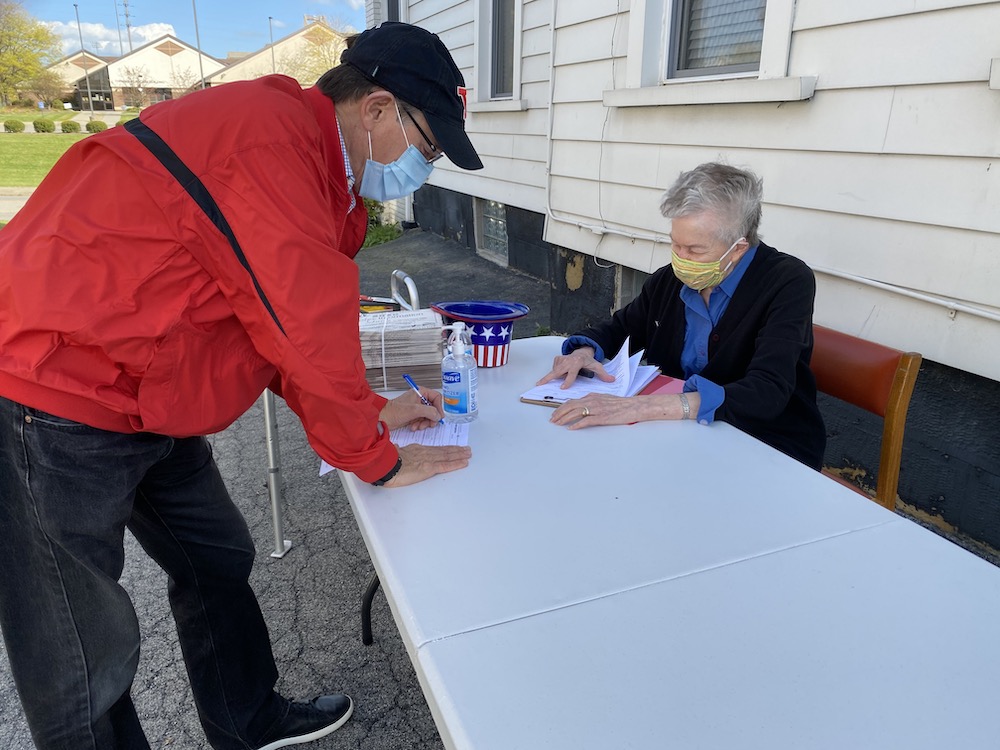 Humility of Mary Sr. Ann McManamon, right, works the voter registration table outside the Dorothy Day House of Hospitality in Youngstown, Ohio. The center set up its table on the sidewalk to register voters three days a week, before the Oct 5 deadline in that state. (Provided photo)

Sisters' efforts range from small voter registration efforts to large get-out-the-vote ones. The Sisters of St. Joseph of Concordia, Kansas, are working to register voters in their small, rural town and another nearby — they set up a table and register everyone they can.

Sister of Loretto Barbara Roche in St. Louis, Missouri, is working on Vote Forward's Big Send project, which aims to send 15 million letters to people unlikely to vote encouraging them to do so. The group's goal was originally 10 million letters, but it has surpassed that number.

"Their research has shown that they can increase the chances these infrequent voters will vote by sending them a personalized letter a week or two before the election," Roche wrote in an email. "It's something concrete that those of us who don't live in swing states or [swing] Congressional districts can do to make a difference in this critical election."

In Brownsville, Texas, Daughters of Charity Sr. Liz Sjoberg and Sr. Sharon Horace, work with Proyecto Juan Diego's voter registration efforts.  Registering voters has long been a part of the center's work, including — at least before the pandemic — registering new U.S. citizens right after their citizenship ceremony, netting up to 100 new voters at a time.

"Our goal is to get people to register to vote, and then get them to vote, because registering is only half the battle," Horace said. "For me, it's all about the dignity of the human person: These people are citizens, they have the right to vote. …There shouldn't be anything that stands in the way of that." 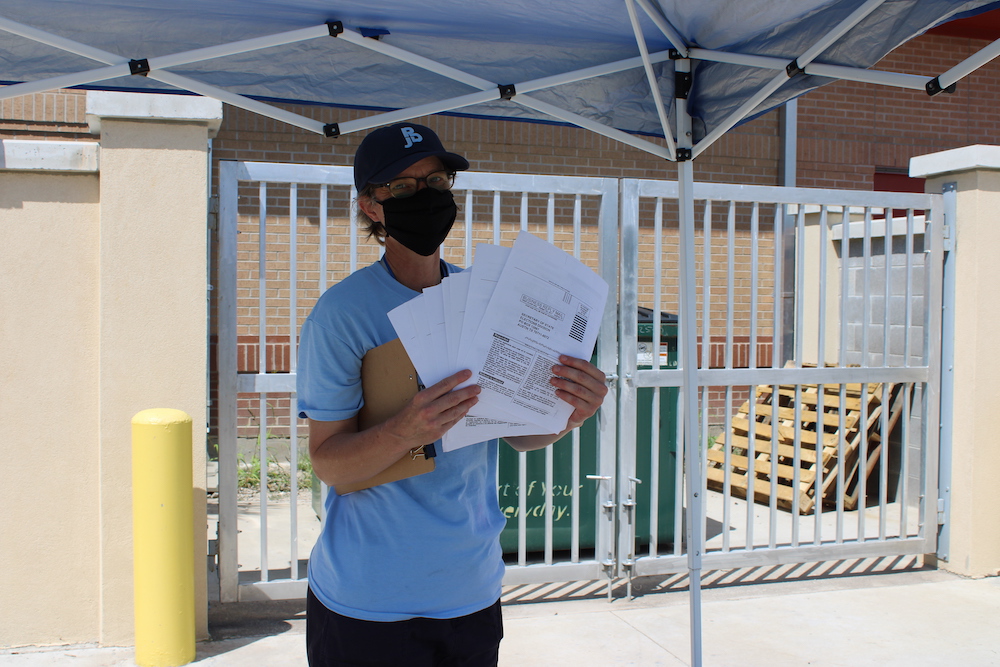 Sinsinawa Dominican Sr. Quincy Howard said those types of efforts are sorely needed because voting rights are under attack like never before. Howard is the coordinating director of advocacy, outreach and campaigns for Faithful Democracy, an interfaith coalition working for federal reforms. She is also a government relations specialist at Network Lobby for Catholic Social Justice.

Attacking voting rights "is definitely not a new phenomenon — all the tactics that have been happening have been happening for decades, mainly to people of color," Howard said. "What's new is the pandemic and the scale of the attacks. Now they're much more indiscriminate. The pandemic has opened up all those tactics to be applied on a scale that is quite disturbing."

Social Service Sr. Simone Campbell, executive director of Network, said the tactics prevented in Southern states by the Voting Rights Act until it was gutted by the Supreme Court in 2013 — such as voter ID laws and gerrymandering — are no longer limited to the South.

"The whole nation is under this effort," Campbell told Global Sisters Report.  "I am so concerned for our democracy."

Howard said there are efforts in Congress not just to protect the right to vote but also to encourage voters to use that right, but they are stalled in the Senate. And efforts to provide funding for the U.S. Postal Service to handle an expected crush of absentee ballots and to state and local jurisdictions to mail and count those ballots have also died.

But all is not lost.

"The silver lining is it's opened people's eyes that voting rights are not guaranteed," Howard said. "We're seeing things very clearly in a way we did not before 2020."

Not that there weren't loud warnings.

"A lot of communities, especially communities of color, have seen this for a long time before, they were raising red flags, they were yelling at the top of their lungs, but nobody listened," Howard said. The narrative that voter suppression efforts were efforts to prevent voter fraud "became prevalent enough that people just blew [the warnings] off," she said.

McManamon said the number of people they've registered is small, but each one is important — and it is important in that person's life.

"You're making an individual aware of their dignity and that they're very much worth the time spent in the conversation. We let them know they are the voting power in this country," she said. "It's also a two-way street — we learn as much as they learn, I'm positive of that." 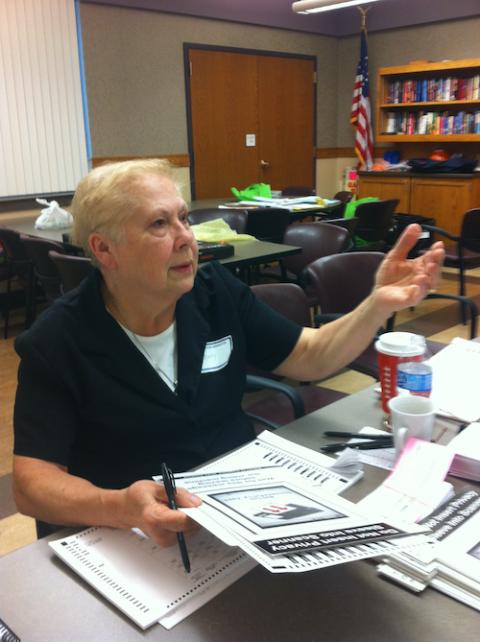 Sr. Maria Salerno, of the Sisters of St. Francis of the Neumann Communities, has long volunteered with the Onondaga County Election Department in central New York. Here, she is seen working the polls in a previous (pre-pandemic) election, and Salerno plans to work the polls again Nov. 3. (Provided photo)

Howard said that despite the voter suppression efforts, the intimidation, the fears surrounding mail-in and absentee ballots and the pandemic, people should not despair.

"We're having our election," she said. "We're going to vote, and we're going to have an outcome. We will get through this."

Campbell said sisters are just what is needed in all this. "Sisters are a great resource in making sure people are registered to vote, especially low-income people or new citizens working through the process," she said. "Sisters are practical. That's what I love about sisters — we're practical and we get it done."

"I don't see people getting discouraged," she said. "I see, 'I must vote.' They're determined to go vote no matter what."