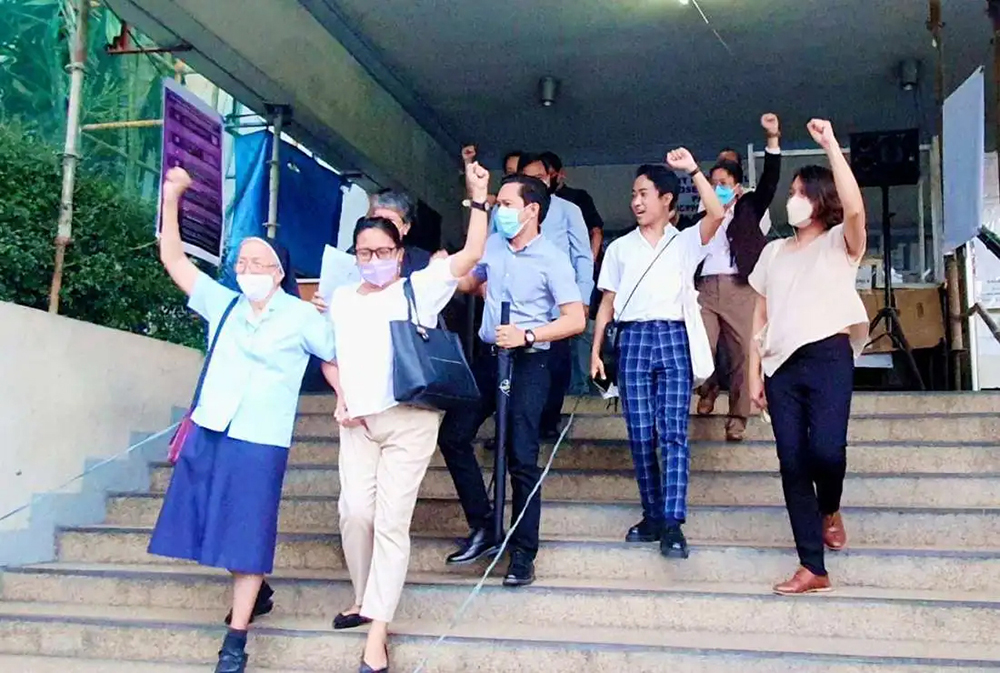 Good Shepherd Sisters and others accused of perjury leave the court after the judgment of acquittal was read in their presence Jan. 9 in Manila, Philippines. (UCA News/Provided photo)

A court in the Philippine capital Manila acquitted 10 members of the Rural Missionaries of the Philippines, including two nuns, from perjury charges Jan. 9.

Missionary of Sisters of Mary Sr. Emma Cupin and Good Shepherd Sr. Elenita Belardo were among the human rights activists whose perjury charge was junked by the court in Quezon City of Manila "on the ground of reasonable doubt."

A perjury charge refers to a criminal act that occurs when a person lies or makes statements that are not truthful while under oath.

Former President Rodrigo Duterte's national security adviser, Hermohenes Esperon, filed a case against the nuns in 2019 for allegedly lying under oath that the Rural Missionary of the Philippines was a non-stock, nonprofit organization.

Human rights groups condemned the perjury charge as part of harassment to silence the nuns and their companions from their strong advocacy for human rights.

"Those cases were filed to silence church organizers because [government operatives] know the poor are empowered by the mission of the Catholic Church. When the poor are empowered, they begin to question the abuses done to them by the rich and the powerful," Karapatan Alliance Philippines member Carlo Frias told reporters.

On Jan. 8, religious nuns, together with ecumenical groups, staged a prayer rally for the acquittal of the 10 accused in the perjury case as the court delivered the verdict. They also participated in a Mass and lit candles.

After the Mass, the sisters rang bells in the streets in public witness of support for human rights defenders calling for a favorable decision.

Rural Missionary of the Philippines is a church-based national organization of priests, nuns, and laypeople working for the village poor.

"We hope this positive decision augurs well for the calls to stop the attacks against human rights defenders in the country," the group said in a statement.

Gabriela remains "steadfast in its work of defending the oppressed, especially disempowered and impoverished women," it added.

Human rights advocates protested outside the Quezon City Hall of Justice in Manila while the verdict was being read.

"We stayed and we prayed. Let it be known to the world that there is hope in the justice system in the Philippines. One cannot just file malicious charges or cases to silence those who fight for human rights," Karapatan member Jenny Oliveros told UCA News.

The sisters said their charges were "malicious" and intended to harass those who championed the cause of the poor.

The sisters and ecumenical pastors had prayed together to thank God for the acquittal and to stop the alleged "state attacks."

"By all appearances, the cases were in retaliation for seeking legal protection from State attacks, harassment, and other threats. They want to silence us because they do not want the truth to come out. We thank the Lord for this little victory," Good Shepherd Sr. Concep Bellosillo told UCA News.

This story originally appeared on UCA News and is reprinted with permission.