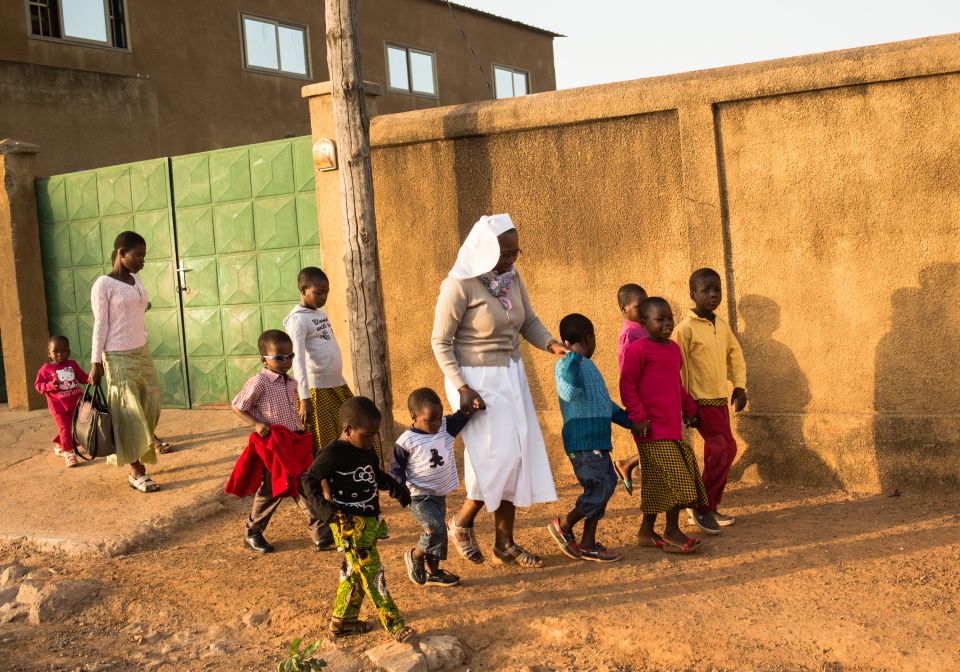 Sr. Marie Stella Kouak, a Hospitaller Sister of the Sacred Heart of Jesus, recently celebrated the 20th anniversary of the association she founded, Vivre dans l'Espérance (To Live in Hope).

The association was set up to take care of orphans and AIDS patients in Dapaong, a crossroads town in northern Togo, where roads from neighboring countries Burkina Faso, Benin and Ghana meet. Populations mingle, and the risk of HIV contamination is great. The virus currently affects 3.2% of the 7.8 million people who live in Togo, Vivre dans l'Espérance says. Pregnant women are particularly affected.

Today, Vivre dans l'Espérance supports around 1,500 orphans and vulnerable children. Some still live with family members; others live in foster homes or in one of the two orphanages run by the association, Sainte Monique and St. Augustine. The Centre de consultations et de soins Maguy (Maguy Health Center), which is near the Hospitaller Sisters' home, treats nearly 1,500 AIDS patients annually, 800 of whom benefit from antiretroviral treatments, which make it possible to live with the disease, Vivre dans l'Espérance says.

The association also runs Together for Life, a center where women with HIV train in sewing and making bags and crafts. Since new treatments make it possible to live with HIV, it has become essential for the patients to be trained in income-generating activities that allow them to find their place in their village and regain a taste for life when they are better. A shop and a library complete these activities at the center.

More recently, the sisters have set up a farm, where vegetables, corn, beans and other crops improve the daily food of orphaned children and also train young people to become farmers.

The development of the association and the discovery of new treatments that extend the lives of patients led Sister Marie Stella and her team to consider applying for nongovernmental organization status at the United Nations. She spoke to Global Sisters Report on the phone from Togo.

GSR: Why do you want to become a nongovernmental organization?

Kouak: First, because our workload exceeds that of an association. Two hundred and fifty children are currently 100% cared for. A hundred girls and babies are housed in the orphanage St. Monique; about 60 boys live in St. Augustine; other children stay with host families. Twelve hundred other children are helped 50% or 75% by the association.

Second, Togolese laws provide for a budget that should not be exceeded, and we have largely exceeded it for a few years.

Finally, if we become an NGO, we can get more funding. Many partners refuse to finance us because we are not NGOs. We are really always short of funding. In addition, the economic situation in Togo, a very poor country, is getting worse and worse, and more and more children are undernourished. Many of our patients have pathologies that are increasingly difficult to manage and fund. We need qualified medical staff. 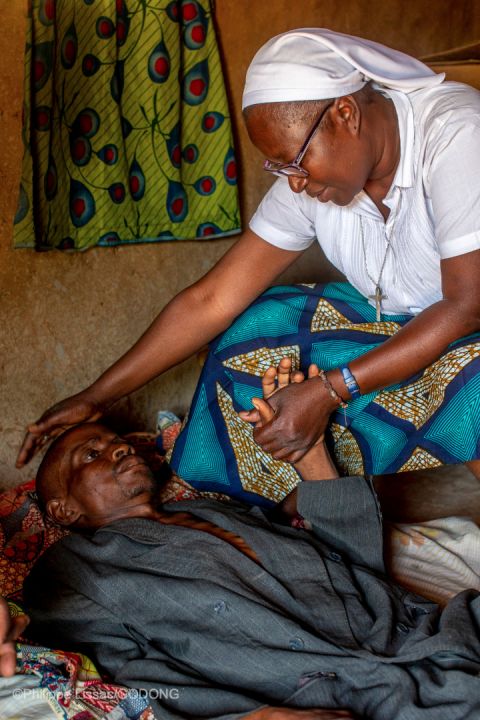 Currently, 56 African employees work for the association; 49 salaries are supported by it, the others by the Togolese state. The Global Fund to fight AIDS takes care of medicines. Thirty volunteers are working with us right now, including young people from Europe who spend a few months on a humanitarian mission. A sponsorship system allows French people and others to sponsor a child by financing their education and their health needs.

There are also the Friends of St. Augustine, a group of volunteers who have been following us since the beginning. Most of its members are mothers who have lost a child to AIDS and who want to encourage families not to reject their children. Many of the mothers take care of orphans who do not have a host family.

To what extent is your congregation involved in the association?

When I became a nun, I entered as a novice at the Sisters of Charity of St. Augustine of the Immaculate Conception in Dapaong, where I was born and raised. In 2012, noting that we were not very numerous, we merged with the Hospitaller Sisters of the Sacred Heart of Jesus, an order based in Spain. Their charism is a little different from that of the Augustinians, and we had to get used to them. But they also had a tradition of working with the sick, like us. Today, the congregation has six nurse sisters, all African. Four of them work in Dapaong, one at the Yendubé pediatric hospital, another at the Yendubé psychiatric center.

I am the only one directly involved in the association, which brings together laypeople, Christians and Muslims. We all work together. We pray together. There is even a young Muslim woman working with us right now. She is there during the morning common prayer, and then she will go and say her own prayers. 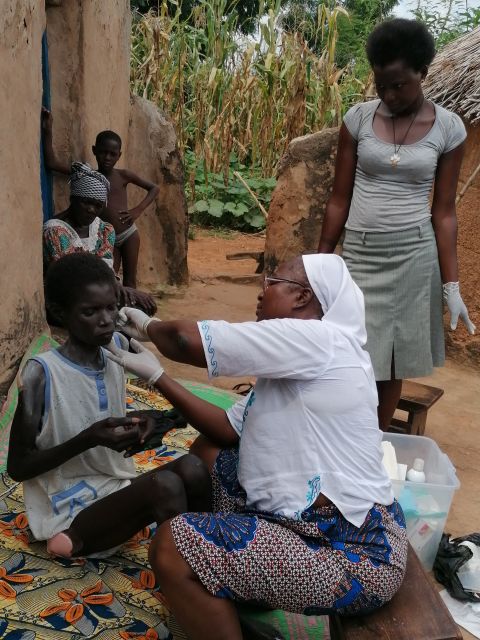 How are things with Muslims?

Compassion is a very strong value for Muslims, as in most religions. We get along well at work. In Dapaong, nearly 20% of the population is Muslim, 45% Christian, Catholic or Protestant, and the others are animists. Polygamy and the status of Muslim women means that nearly 40% of our patients are Muslim. We have found that they respect the achievements of science and seriously follow their treatment. Often, it is the women who bring their husbands to be tested.

Dialogue from one religion to another is all the more important. We have good relations with the imam of Dapaong. He is just as determined as we are to fight and eradicate the disease.

Among the children in our charge, there are Muslims who study the Qur'an when Christians go to catechism. Christian moms take care of Muslim children and vice versa. We really live in fraternity.

When you started the association 20 years ago, you said you had to help AIDS patients and orphans because they were rejected by society, sometimes even by their families. Is being HIV-positive still a curse today?

The patients are a little less badly considered. People understand better that it is a disease for which they are not responsible. Their families who reject them do so because they do not know what this disease is, because they still believe it can be a punishment of God. They are afraid, they are ashamed, and the misery in which they live makes the situation even heavier.

Nobody goes for an HIV test happily. These are taboo subjects at home. The disease is quickly linked in people's minds to prostitution. It remains impossible to talk about it other than in one-on-one meetings. We go to see these families, we try to get to know parents, we talk about prevention, about protecting surviving children. We offer to test the whole family, and we suggest treatment. We have seen progress over the last 20 years because now, families are accepting that patients who do not have AIDS are being treated in the same hospital as those with HIV, which was not the case in the beginning.

Do you have a close relationship with the local church?

A new bishop, Dominique Banlène Guigbile, was appointed two years ago and, like his predecessor, he gives us his full support. The former bishop, Jacques Tukumbé Nyimbusède Anyilunda, who had supported the association from the beginning, gave us a house we used for our center for young people.

We welcome both HIV-infected Africans from the region who are looking for something to do but also foreigners who want to do a humanitarian mission in Africa. They help us in our activities, while we help them find their future.

We have lots of other plans: We would like to build a maternity ward to be able to welcome in good conditions women who give birth and who are often very poor. Construction has begun.

We are also looking for funds for a laboratory because the analysis we need cannot be done in the region. We have to go 300 kilometers away to have a proper blood test or a proper X-ray.

Our activities find their place in the church, since the pope invites us to open our doors to the most vulnerable, the poor, so that all these people can find in Christ the joy of reliving.

These situations are so difficult that we very much need a spiritual life to hold on to. We are morally and physically tired. Me, the day I do not pray, I am completely empty.

Ministry | Q & A with Sr. Marie Stella, leading the fight against AIDS in Togo

Q & A with Mercy Sr. Eileen Boffa, seeing beauty, God in people living on the streets