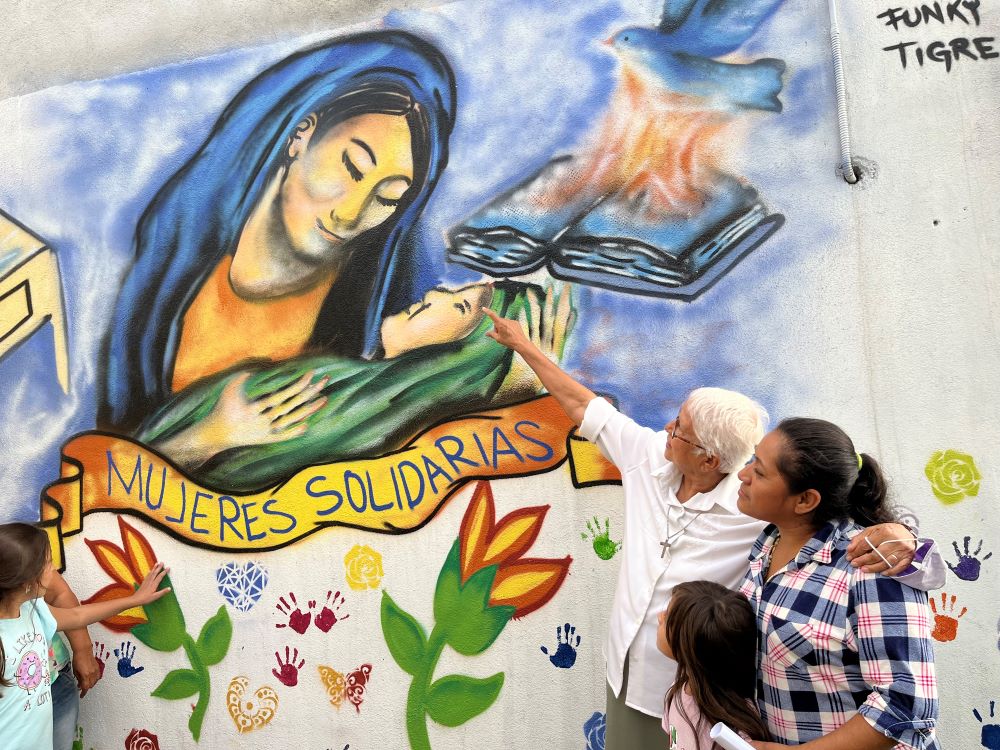 Social Service Sr. Virginia Bahena stands with a single mother from the community she serves in Nuevo Laredo, Mexico. Among the projects she worked on was training vulnerable women to learn a trade so they could work and support their children. (GSR photo/Luis Gonzalez)

Social Service Sr. Virginia Bahena has the same energy and tireless pastoral zeal at 78 as she did two decades ago when she arrived in the border town of Nuevo Laredo, Mexico.

Despite its potential for international trade development, in recent years, this city's social progress has been limited due to the kidnappings, shootings and murders by drug cartels that have instilled fear in the community. The city also faces inequality and poverty in the most remote barrios, as well as migrants crossing through to the U.S., on the other side of the Rio Grande.

Here is where Bahena lives out her congregation's charism, which calls them to create a more humane and just society based on care and love for the poorest and most vulnerable.

Bahena, who took her first vows in 1963, has carried out this mission through a holistic evangelization project that seeks to attend to the spiritual needs of the poorest, while responding to their physical, psychological and social needs.

Living this call, Bahena has directed ecclesial and civil projects in poor and remote barrios to promote the development of families and the most vulnerable in society, especially abandoned women.

With her vast experience, she served as coordinator of the Diocesan Ministry for Women 2005-2013, and today is an adviser to the local government for the implementation of social projects for women and children, such as soup kitchens, women's workshop centers, or psychological care centers.

"Thanks to God and the support of the sisters, my family and I have been able to succeed, my children were able to study, and today they are professionals," said Carmelita Lara, one of the sisters' first collaborators in the city's outlying neighborhoods. 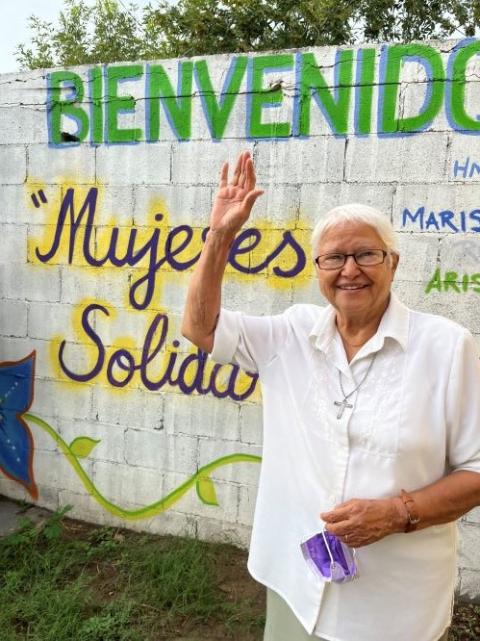 Social Service Sr. Virginia Bahena arrived in Nuevo Laredo, Mexico, in 2000 to work in the city's poorest neighborhoods. "There we found a lot of poverty, but also a fertile field for evangelization," she said. (GSR photo/Luis Gonzalez)

GSR: You arrived in Nuevo Laredo 22 years ago. What did you find here?

Bahena: We arrived here in 2000 at the invitation of the late Bishop [Ricardo] Watty Urquidi to work in the city's poorest neighborhoods. There we found a lot of poverty, but also a fertile field for evangelization. In other words, there was a lot of need for social development, but also a great need for God. We quickly knew that this was the place where our social and evangelizing mission should be.

How did your work begin?

After selecting the mission site, we began to get to know the local circumstances. With the support of [Unbound], an American foundation, we started a child sponsorship project that provided the children with materials for education and catechesis.

This initiative helped us meet hundreds of poor families and, above all, many single mothers who, although originally from other places in the country, came to Nuevo Laredo so their husbands could cross the river to work in the U.S. Sadly, many of them did not return, leaving their families abandoned and unprotected.

These situations were critical, as families struggled to survive and children starved and suffered from malnutrition.

Have you been working for women since then?

We could not stand still in front of so much need. We decided to immediately start a community kitchen project we called Mujeres solidarias (Women in Solidarity).

In this kitchen, in addition to training the women of the neighborhood to cook and manage it, we prepared complete meals with rice, beans and meat at a very low cost. In this way we achieved two things: women were able to develop with dignity, and children no longer suffered from malnutrition.

The project was a success, and we were able to build our own kitchen. At the same time, since we knew the women in the neighborhood, we decided to start other courses and workshops on baking, haircutting and making costume jewelry, among many other things.

We worked so that vulnerable women in the neighborhood could learn a trade, and thus be able to work in honest ways to support their children. 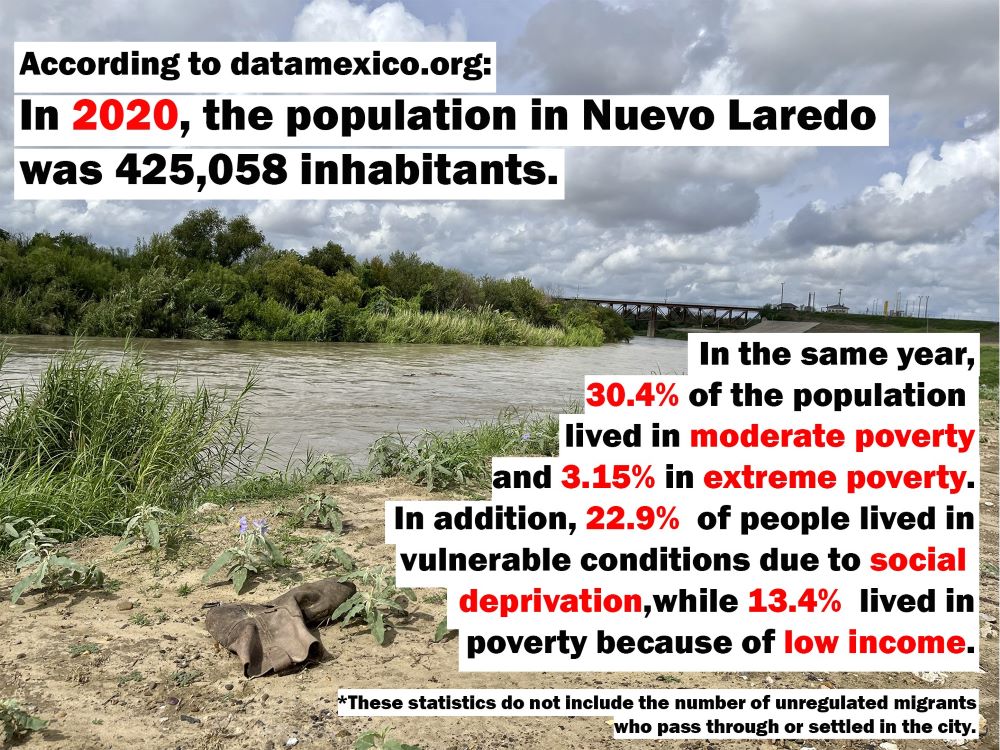 How have your projects for women evolved over the years?

Although circumstances and needs have changed over the years, we have not stopped working. For example, in the early years we multiplied community kitchens and workshops for women.

These community projects aroused so much interest inside and outside the church, that in 2005 Bishop Watty asked me to direct the Diocesan Ministry for Women. From there, we started dialogues between the church and civil society to make women visible within the community. For example, we invited many parishes and social groups to celebrate International Women's Day [March 8] and the International Day Against Gender Violence [November 25].

[In 2008], we established a nonprofit organization called Grupo Pro-Dignidad de la Mujer [Pro-Dignity Women Group]. Today, we continue working with this group. It has helped us to provide safe spaces of support for personal and psychological development to hundreds of women who have been victims of abuse and abandonment.

With our work, we continue to announce to the city how all men and women are sons and daughters of God, with the same dignity and rights.

What has been the most complex aspect of your work in this city?

A very dangerous environment developed in Nuevo Laredo around 2005 because of drug cartels. This has been very difficult for the whole city. We have worked, during these years, to accompany families who have been victims of violence and insecurity. We have witnessed shootings, kidnappings and uncertainty.

We have had to get on the ground to protect ourselves in the midst of the fighting more than once. It is terrible to be exposed to bullets, especially in neighborhood centers or chapels where mothers and children meet with us. This is the reality families live every day.

We have also comforted many people, especially mothers who have lost their children. It has been very difficult to make God present and to console people in this pain.

How do you find God's presence in your ministry?

God has never left us alone. I find Him in the abundant fruits we have seen since the beginning of our ministry. For example, I see God in family reconciliation, or in the young people we have supported from a very young age who have managed to graduate from university today. For me, it is impossible to not find God in a happy family.

I see God's hand when carrying out projects that do not collapse, even in the midst of difficulty. I know that the Holy Spirit is present here, helping us face and solve problems. He is always sustaining us and pushing us forward. I am a witness of a God that does not leave His poorest children alone. He is a God who, like in the Gospel, sends us to feed and make those flourish who are most in need.