Q & A with María Soledad Gómez Navarro, historian specializing in the lives of Spanish sisters 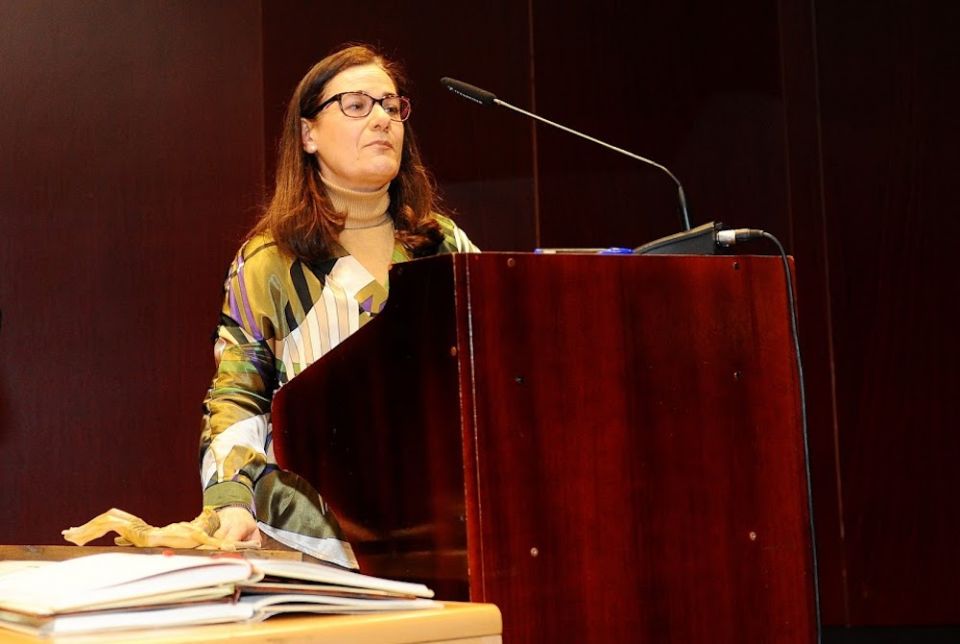 There are only about 12 researchers in Spain and 20 in the Spanish-speaking world who study Catholic sisters, and María Soledad Gómez Navarro is one of them. She is a historian specializing in the lives of 17th- and 18th-century Spanish sisters from Córdoba, in the south of Spain. While teaching history at the Universidad de Córdoba, she studies cloistered nuns using a sociological and gender theory framework.

Global Sisters Report spoke with Gómez Navarro about unearthing the history of "forgotten" women and the value of contemplative life.

GSR: Have you been interested in the contemplative life yourself?

Gómez Navarro: Always. I have always been drawn to this mystery that surrounds the convent.

I studied at a sister-run elementary school in my hometown outside of Córdoba, and I always went to Mass with the cloistered sisters. When I was young, we went to the convent for Communion hosts because these sisters made hosts for Mass and candies. They always greeted us from behind the bars with the turnstile through which you can't see their faces.

It always seemed to me a mysterious life. When you step through the door of a convent, it's a way of life that's very different from the outside, the bustle of the street.

How do you rescue the memories of the lives of these women?

With the documents, the archives. The ideal way to get to know the nuns of the past is through the archives they have in their convents. This is very difficult.

I'm fairly friendly with some sisters in Córdoba, the Hieronymite nuns. I've visited the cloister archives a few times, but it's very difficult to be permitted to consult it. The sisters are distrustful. They think that you're going to take things away. They have been betrayed many times and lent things that were later not returned.

So what we do is consult documents related to nuns that are not located in their convents, but in the public archives: dowries, accounting records, books of vowed religious, the rules. There are many ways.

What most interests us now is the writing of nuns, their creative writing: the letters they wrote, when their confessors told them to write what they thought, or literature like that of Sr. Juana Inés de la Cruz or St. Teresa of Ávila.

One of the nuns in Córdoba, Sor María de Gracia, is a very intelligent woman and a good writer. She wrote a book last year about what the sisters do each day, what readings they have for Mass. If these books and letters aren't published, it's very difficult to access them because now, the sisters don't let you access their personal archives.

Now, what interests me is the conflict. I recently read about forced vocations. We know from the letters that they wrote that many girls were made to enter the convent. And they ran away from the convent, and later, they were forced to return. They initiated the process of leaving the convent, which was difficult, and ultimately, the pope had the final say. Rebellious nuns — many times, they were taken to the Inquisition. But they didn't [always] resist being docile women. These seem to me stories of life, of survival, of struggle.

What do you find in these documents and archives?

The dowry identifies the girl entering the convent, so you know if she is from a specific social circle — the specific convent; the entrance process, that they made the dowries two months before taking the vows of novitiate. The father of the girl committed to pay the convent during the novitiate and, later, when she takes her vows.

Because of these writings, we know there were economic differences between the various sisters and religious communities, if they were mendicant or monastic. With respect to gender and social history, you notice that the sisters are not angels; they're part of society. The social differences from outside are inside the cloister.

Another type of record that is very important are the wills. They let us know that many Spaniards requested to be buried in convents. For example, Miguel de Cervantes, the author of Don Quixote, was buried in a Madrid convent. With all this documentation, we can reconstruct the relationship between inside and outside the cloister that was conducted through the church.

In Córdoba, the convent of the Discalced Carmelites of Santa Ana and San José burned down, and they decided to move their records to the city archives. This is very important for my research because I can go and consult the account books in the archives.

With the tools of sociology, of economics, of psychology that are present in social history and the history of gender, you form and give shape to all of this data. In Spain, we call these account books a "white blackbird." We are lucky to find them. When you find records like this, you can reconstruct an order's history.

What is life like for cloistered nuns right now?

We were required to quarantine in Spain, not leave our houses. The nuns decided to live this way, always confined. There have hardly been any cases of coronavirus because of their way of life.

I remember that in the middle of the quarantine, there were some complaints by people who saw some nuns from a convent in Seville playing basketball. They reported the sisters because they thought that they were playing outside of the convent. It was an ignorant action, fruit of ignorance. The nuns have their flower gardens, their vegetable gardens, their orchards, and they played on their property, and then, this way of life was discovered. It's a curious way of life that the people had forgotten, and now, no one remembers them anymore.

Studying the past helped me understand the present-day crisis of vocations. It has a lot to do with women's options in present-day Spain. Now, women choose their futures, go to universities, want to find their destiny. And if they enter a convent, it's because they want to, not because they're obliged to. The arrival of women from other parts of the world in Spain has to do with the economic and social conditions of their countries of origin.

And if I apply this concept to the past, I can understand that the contemplative way of life right now in Spain is in decline because before, it was the only way out for a woman, along with marrying a mortal man. Now, this isn't the case. Many convents are disappearing because when the Spanish sisters die and new foreign sisters don't enter, the convents close.

Tell me a story about a nun who surprised you.

I always visited this sister who cleaned my coats, and she said something that made an impression on me. She entered the convent at a very young age and had been there for over 60 years when I met her. She had been the abbess, the novice mistress, and she told me, "Soledad, never, not once, did one day seem like the other to me."

After living more than 60 years with the same women, each with their own personalities, each with good days, bad days, never did one day seem like the other to her. For me, this seems to be something mysterious; God can work in people.

You could hear the voices of many women if the cloisters spoke. So, to interrogate these silent voices and give them voice, as a historian, is especially important to me.

[Eleanor Nash is a student at Wellesley College in Wellesley, Massachusetts, studying English.]

Q&As | Q & A with María Soledad Gómez Navarro, historian specializing in the lives of Spanish sisters

Walking with women on their way to freedom

Nature in our lives, in the cathedral, in the house of human rights

Amid change and uncertainty, Basilian Sisters in Ukraine embrace risk and love