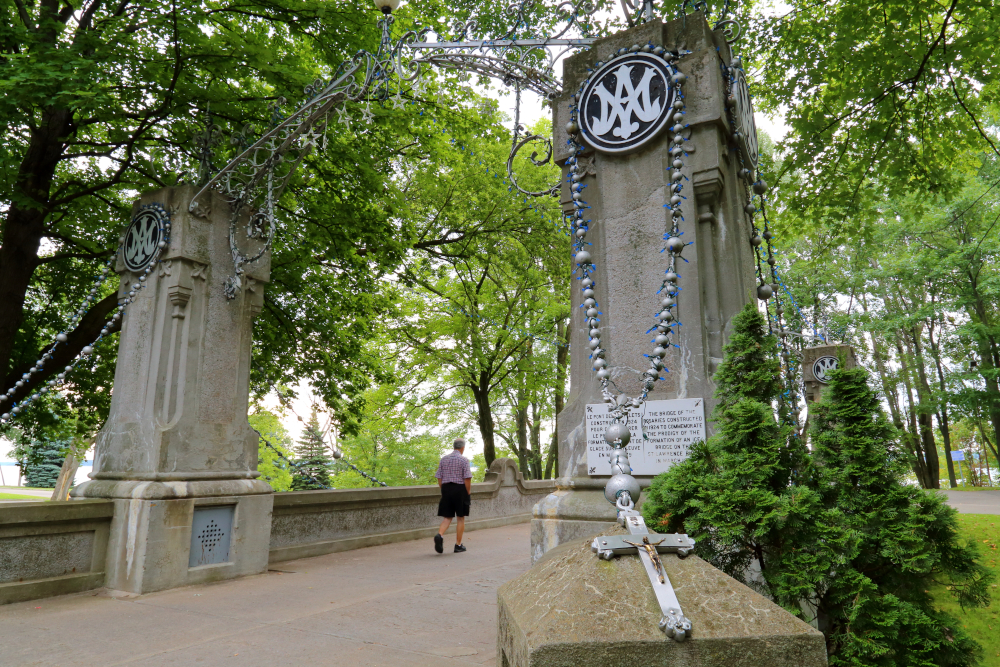 A man walks across the "Rosary Bridge" in 2017 at the shrine of Cap-de-la-Madeleine in Trois-Rivieres, Quebec. It's been reported that six sisters of Saint Anne and six Ursulines from Trois-Rivieres have died of COVID-19 so far in 2020. (CNS/Presence/Philippe Vaillancourt)

The government of Quebec announced it will pay close to CA$5.2 million ($3.9 million) to religious communities in the province so that they can offer bonuses to members of their staff who work in their infirmaries.

Marguerite Blais, Quebec's minister responsible for seniors and caregivers, announced June 8 the financial assistance "will be provided to these communities on an emergency basis." She added the bonuses would be retroactive to March 13, 2020.

The announcement came after Sr. Celine Dupuis, co-provincial of the Sisters of Saint Anne, said six of their nuns had died of COVID-19 in Lachine, Quebec; this was five more deaths than what the official government data shows.

In Trois-Rivieres, halfway between Montreal and Quebec, seven Ursuline sisters have died of COVID-19. Other orders also have been affected.

"It's a lot in a short time," said Sr. Cecile Dionne, superior general of the Canadian Union of the Ursulines. "It is a difficult context, which we share with all our brothers and sisters in humanity. All families experience it. For some, it is their father, their grandmother. For us, it's our sisters."

Marjaurie Cote-Boileau of the seniors and caregivers ministry noted the money would "not go directly to religious communities, but to their caregivers."

"The sisters take care of vulnerable people," she said. "They are important to our government."

Since the beginning of the health crisis, religious congregations in Quebec have repeated that they have been forgotten by the government as they take care of their members who are over 70 years old and that their convents and houses are, for the most part, not recognized as residences for the elderly.

Since the announcement of bonuses offered to public sector staff, religious communities, unable to provide comparable wages and conditions, have reported losing employees.

Two-thirds of Canada's religious sisters, brothers and priests live in Quebec. In 2014, the Canadian Religious Conference calculated that 94% of Canadian religious were over 60 years of age.