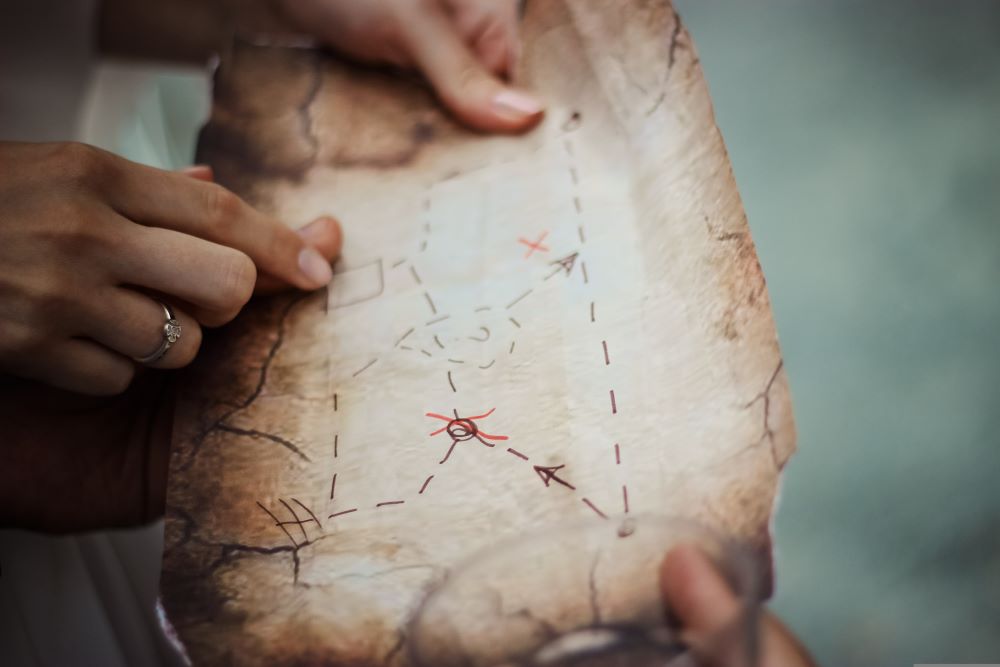 When you are in charge of young people at a summer camp, have you looked for a way to get them to interact better among themselves and become alive? Then treasure hunt is the best game! This game, one of my all-time favorites, is all about searching for the treasure kept in a secret location.

The group has to find the treasure — with the help of various clues usually written on small pieces of paper and hidden in different places. Quite often the participants miss these clues because they are kept in familiar places, like underneath the table or behind a photo frame. These places are often overlooked since we don't expect these places to be important enough to hold a treasure, do we? It is pure thrill to see the group hunting for the clues and the treasure.

The season of Christmas is like a treasure hunt: The treasure is hidden, but with clues. Many miss the clues and the treasure, for they do not genuinely seek the treasure. We need radical seekers today, just like the shepherds and the Magi. The development of radical seekers, of course, is a process like the treasure hunt. It is a process that involves a gradual transcendence, in which we move beyond a limited perception of ourself and the world around us. In this movement, we seek for deeper truths, since those that we have already learned seem to be either redundant or stifling to our inner being.

What facilitates this process of seeking are the various signs and clues that come along our path from time to time. The star and the angels were signs, and they guided the steps of the shepherds and the Magi so they could encounter Christ. They followed their innermost yearnings to search for the Truth — Christ. They read the signs and realized that they had to step out of the "known" with an open mind.

They did value their own perceptions, philosophies and ideologies, but also understood that there was a reality beyond their worlds. The eternal truth needs to be sought in the midst of our humanity, in simplicity. This is the inspiration that we find in their lives. They sought these truths, not in great places, but in ordinary settings and circumstances. Like the treasure hunt, only a wise seeker would know that the treasure is hidden in the ordinary.

A wise and radical seeker would know that the divine is present everywhere, in all things, at all times. However, oblivious to this fact, many of us fail to understand this simple truth. Echoing this, the Nobel Prize-winning poet and philosopher Rabindranath Tagore says,

I have been seeking and searching God for as long as I can remember, for many many lives, from the very beginning of existence.... I have to find him, I am so absorbed in the search … [that] the search has become itself the goal. And to my surprise, one day I reached a house in a faraway star with a small sign in front of it, saying, "This is the house of God." My joy knew no bounds — so finally I have arrived! … But as I was coming closer and closer to the door, a fear suddenly appeared in my heart. … The fear was: "If this house is certainly the house of God, then what will I do after I have found him?” … And as I reached the steps, I ran away as I have never run before; and since then I have been again searching for God, looking for him in every direction — and avoiding the house where he really lives. Now I know that house has to be avoided. And I continue the search; enjoy the very journey, the pilgrimage.

What could be the reason? Probably, our inner conflicts could hinder us from seeing and seeking God in ordinary forms. The above verses of Tagore describe well these inner conflicts. Quite often, we remain satisfied with what has been given to us. Either we stop seeking or we seek God only in the extraordinary. The latter gives us a false sense of superiority over others. Alas, we have missed the point. While claiming that we are seeking God, we are in fact escaping from God. It is wisdom to challenge this within us and understand that Divine presence is ever present to us, at all moments.

The shepherds and the Magi were true seekers, as they listened to the angels and the star. They found Christ in the manger. As we re-create the nativity through our cribs and celebrations, may we not forget that it is essential to become seekers and not be satisfied with decorations and celebrations. Our tokenism of the poor, our lovely carols, our elaborate celebrations — none can fully contain God or confine Him. We need to become wise and radical seekers to find our God beyond these, for He dwells everywhere, even in those places we hesitate to imagine!

It is true Christmas when we have found Christ in the most ordinary of all. Just like the widow in the following story: She was a mother of two children and lived a sorrowful and painful life, as her husband had died by suicide because of depression. Different people interpreted the suicide in different ways. A shaman told her that it was some evil force that had acted on him. Another woman told her that it was the sins of his ancestors. Yet another remarked that it was her karma or her past evil deeds.

She shared how confused, upset and disheartened she was. She was still seeking light. One early dawn, she was giving alms to an ordinary beggar, who said to her: "Everything that is born dies and everything is in the process of change." This simple truth made a deep impression on her and brought about a new change in her life. Did not Christ encounter her in the most ordinary way here?

It is not yet Christmas for those who fail to be radical in their seeking and wise in their understanding. It is Christmas when we begin to seek him and find Him in the ordinary. After all, He is Emmanuel, God-With-Us! Isn't He?