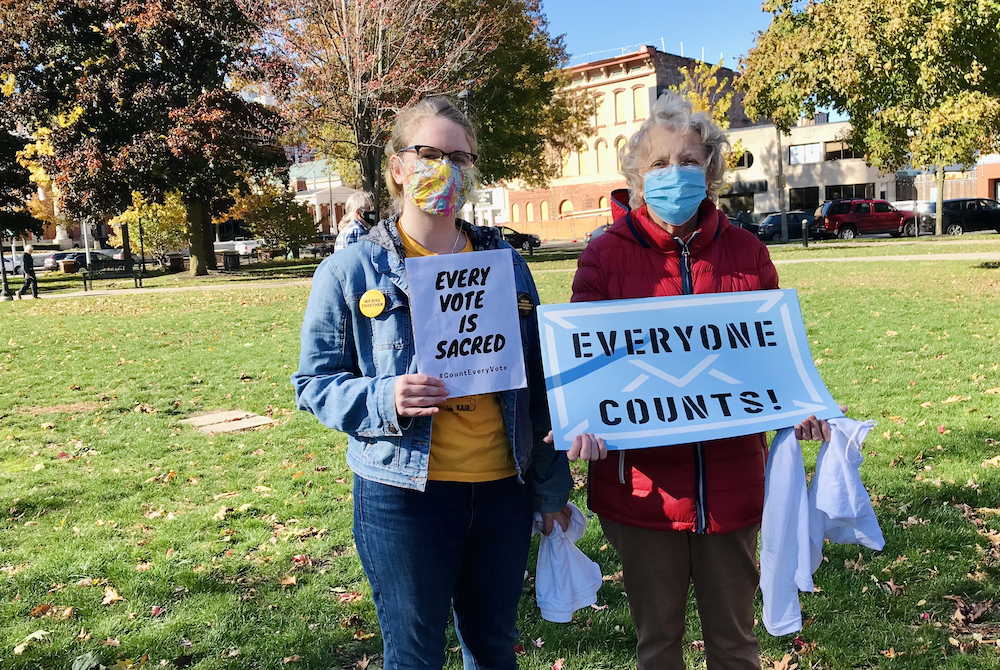 As I write this, I am in my corner office at Pax Priory, a small living community of the Benedictine Sisters of Erie, Pennsylvania. It is a room filled with decades of love, light, color and artwork. Sunlight is streaming in, and one of Corita Kent's pieces comes to mind, "Let the Sun Shine In." Next to Pope John XXIII in full clerical garb, the text on the image reads:

LET THE SUN SHINE IN
the creative revolution — to take a chunk of the imagined future and put it into the present — to follow the law of the future and live it in the present. Waskow

Corita made this in 1968 amid a tumultuous and traumatic experience where Cardinal James McIntyre was in open conflict with her community, the Sisters of the Immaculate Heart of Mary, attempting to control and inhibit their Vatican II renewal. With her colorful and subversive pop art, Corita was often at the center of the controversy, receiving the brunt of the cardinal's harsh reprimands.

This piece by Corita captures the spirit of renewal: After centuries of institutional rigidity and patriarchal control in the Catholic Church, the Second Vatican Council opened the windows and let fresh air into religious life. Congregations across the world were challenged to return to the charisms and the visions of their founders and foundresses. With a joyful and discerning spirit, the Sisters of the Immaculate Heart of Mary embraced this invitation to change.

Corita Kent (1918-1986) was one of several sisters, including Anita Caspary (1915-2011) and Helen Kelley (1925-2019), who led the cultural and social revolution of this community. The stories of this exceptional community and its leaders are told in a new documentary, "Rebel Hearts."

March 5, 2020, at noon Eastern, the Miami Film Festival will screen "Rebel Hearts." You can get your ticket to view it here.

I watched the premiere of "Rebel Hearts" with the four Benedictine sisters I live with at Pax Priory. They are all in their 80s now and joined religious life in the 1950s and '60s, so they, too, walked through the transformations of Vatican II renewal. Although the documentary focused on the particular experience of the Sisters of the Immaculate Heart of Mary, as we watched, the Erie sisters laughed at the familiarity of this story with their own. As one sister said in the documentary: "Clearly, we were in a boat that desperately needed rocking."

Nuns and Nones, the organization I work with, is our emerging generation's response to the age-old work of integrating the spiritual life and social transformation hand-in-hand with the generations of those who came before us. In a time where social, economic and political systems feel hopelessly unchangeable, in stories like those of Vatican II, we see communities that discerned and lived daily into lasting transformation — even within the most patriarchal constraints possible.

The film shows how this transformation was butting up against the status quo of the Catholic Church and how those in power were afraid of what this change would mean for their global institution. Through systems of control and suppression, some male leaders in the Catholic Church sought to stifle the visionary potential of the Sisters of the Immaculate Heart of Mary. The bright colors of Corita's artwork offended them; the freeing joy of the sisters' religious celebrations disturbed them; the women making decisions by and for themselves threatened the power of the institution. Utilizing the hierarchical and patriarchal structure of the global Catholic Church, they attempted to stamp out this particularly radical renewal.

At one point in the multi-year battle between the sisters and the diocese, four bishops were sent to discuss the controversy and find a way forward with the community. The bishops suggested the community publicly side with the cardinal while quietly living into the changes the community desired. The sisters viewed it as an invitation into religious hypocrisy. At that meeting, Corita asked the bishops and the community as a whole: "What would Jesus say?" Many sisters knew at this point that following the life of Jesus might actually require that they leave the Catholic Church behind.

After that fateful meeting in 1969, the sisters were given forms to dispense from their vows and thus formally release their affiliation with the Catholic Church. This was a particularly painful moment; over the years, the sisters fought to maintain their dignity and their relationship with the church that they loved. But in response, the hierarchy said to them: "Do it our way, or leave."

There were 560 sisters in the community at that time, and 327 dispensed from their vows and left. The decision was not taken lightly by any, and it divided a community into two, severing the spirit of oneness that is the core of their faith. Corita seemed particularly heartbroken, took a sabbatical from the community and never came back. She continued her prophetic artwork and built a new life in Boston.

Katie Gordon, second from left, with Benedictine Sisters she lives with at Pax Priory in Erie, Pennsylvania, in September 2020 (Provided photo)

However, amid the heartbreak, a "community of hope" also emerged in its wake, the documentary said. The sisters who left the canonical structure of religious life created a new form of committed spiritual life. In the words of one of their leaders, Anita Caspary, they would start a "new kind of community that could revive religious life." In another letter, she wrote "a wholeness of community came out of what seemed to be the dashing of a dream."

In 1970, 220 of the 327 women who left the Sisters of the Immaculate Heart of Mary established the Immaculate Heart Community, which calls itself a "spiritual community without walls." Over the last 50 years, they have continued to evolve and expand their understanding of community life. Today, they have 114 active members that include people from various backgrounds, worship styles, gender expressions, sexual orientations, economic positions, as well as both married and single community members. 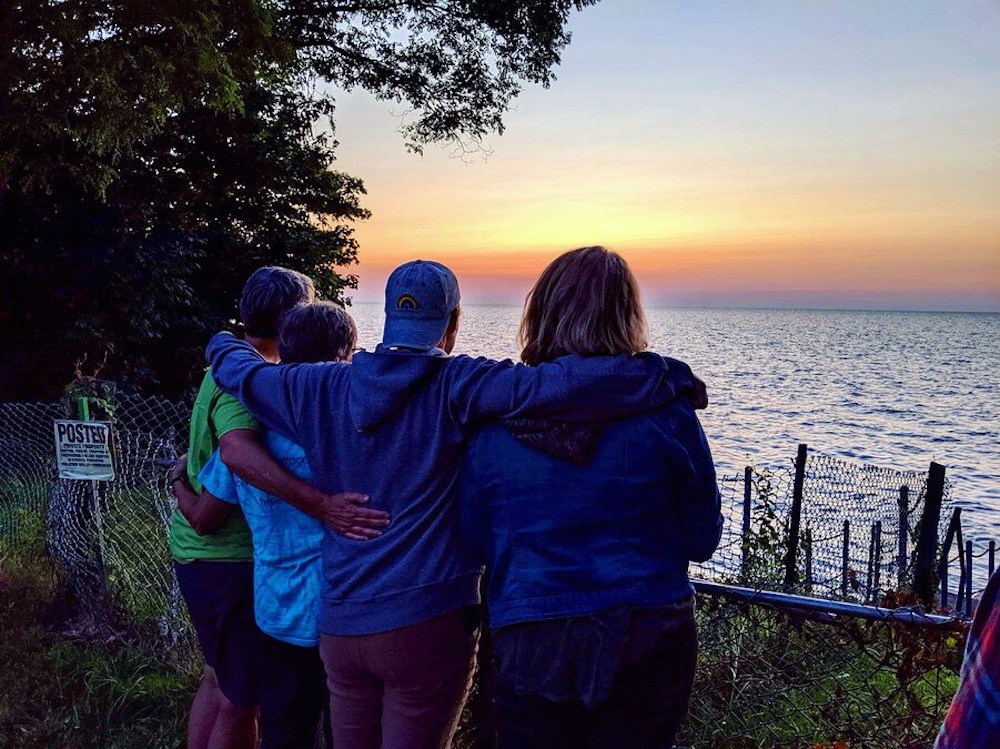 Katie Gordon and her friends take in an August 2019 sunset. (Provided photo)

During the renewal of the '60s, the sisters were yearning for freedom to express their fullest humanity through their spiritual and social commitments. By leaving the canonical affiliation, they stepped into a freedom to, as Corita's artwork says, "take a chunk of the imagined future and put it into the present." They became a dynamic and diverse community that still serves us as a model for joyful revolutionaries today.

In my own work through Nuns and Nones — as well as in a wider ecosystem of experimentation including communities like Benincasa, the Center for Spiritual Imagination, and Mystic Soul Project — many inquiries circle around similar questions: What structures of committed community can respond to today's yearning and serve the needs of our time? What is the relationship between wisdom traditions and new forms of spiritual expression? Is there something that can bring these two prophetic streams into conversation and collaboration? Finally, what do we need to let go of or leave behind in order to step into a more liberating and liberatory future?

This field of inquiry and experimentation is alive as ever, and the story of the Immaculate Heart Community can inspire new expressions of prophetic commitment. In an interview about "Rebel Hearts" with Global Sisters Report, the current president of the Immaculate Heart Community, Karol Schulkin, said: "Nobody knew in the late '60s or early '70s how long we would be a community and where it would lead. But year by year, we've lived into the future." This is how we live into the big lofty questions surrounding the future of religious life: year by year.

Coincidentally, or perhaps synchronistically, I recently marked my one-year anniversary of moving into Pax Priory. There is absolutely no way I could have seen how this past year would unfold. And yet, one year later, I can now see the small steps taken during a slow year and what this place has uniquely offered me: a place to sit in the inquiry and to experiment and evolve our way into the future. In the company of the Benedictine tradition that is over 1,500 years old, in a lineage of monasticism that expresses a timeless spiritual yearning, I am learning to grow patient with this long, transformational moment. Living in my fractal of time, of narrative, of movement, all I can do is keep the windows open and let the sunshine in. Or perhaps, like the Immaculate Heart Community, just get rid of the walls altogether.