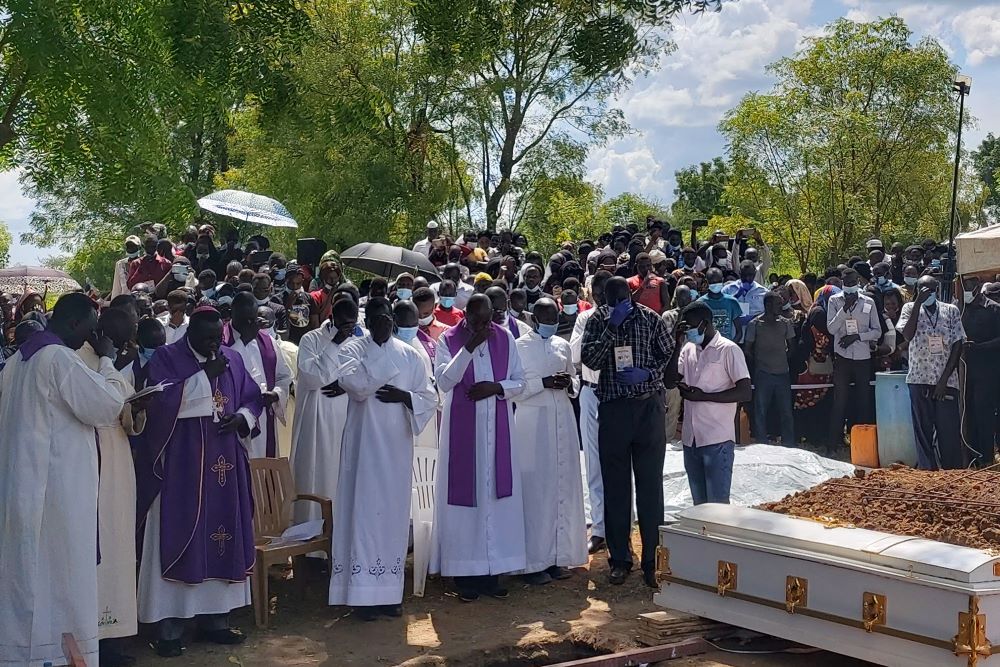 Members of the Archdiocese of Juba, South Sudan, attend the Aug. 20, 2021, burial of Srs. Mary Daniel Abut and Regina Roba, Sisters of the Sacred Heart who were killed when their bus was attacked Aug. 16. (Courtesy of Christy John)

The brutal killing of Srs. Mary Daniel Abut and Regina Luate Roba in South Sudan on Aug. 16, 2021, shook me and so many others. It was an act so blatantly evil it was hard to comprehend.

They had traveled with other Sisters of the Sacred Heart of Jesus to celebrate the 100th anniversary of Our Lady of the Assumption Parish in Loa, where the congregation was founded. As they traveled home the next day, their van was ambushed by armed men who threatened the passengers. Some of the sisters and the male passengers left the van, hoping to divert the assailants and spare other passengers. Abut and Roba were hunted down, shot and killed, along with three other passengers.

Abut was the head teacher of a primary school and Roba, a tutor and administrator at the Catholic Health Training Institute. Both lived out their faith by working to improve the lives of others in the young and troubled nation of South Sudan. No one has been arrested in their killings.

Their loss is keenly felt by the congregation and the community, as Sr. Alice Jurugo Drajea, superior general of the Sisters of the Sacred Heart of Jesus, recounts in a column that Global Sisters Report published Aug. 16, the anniversary of Abut's and Roba's deaths.

Yet their deaths have prompted us at Global Sisters Report to do something more. Today, we debut a special section dedicated to Catholic sisters killed violently in African countries, "Women of Faith: Honoring Catholic Sisters Killed in Service in Africa." The section features short profiles of each sister, links to other websites, and resources for more information, creating a "gallery of honor."

Wycliff Oundo, a journalist and former intern in GSR's Nairobi office under the instruction of regional correspondent Doreen Ajiambo, has worked for almost a year on this project. He has identified and written about 43 sisters violently killed in Africa since 1990. He has done a fine job, drawing on journalistic and academic research skills. He explains his methodology at the bottom of the section. This is a project we wish we never had to do, but it is a cruel reality of our world.

This is the first part of a much larger project — and for that, we ask for your help, please. Over the next several months, we will continue to add to this special section, honoring sisters violently killed around the globe. You can fill out a form here to tell us about sisters who should be included. 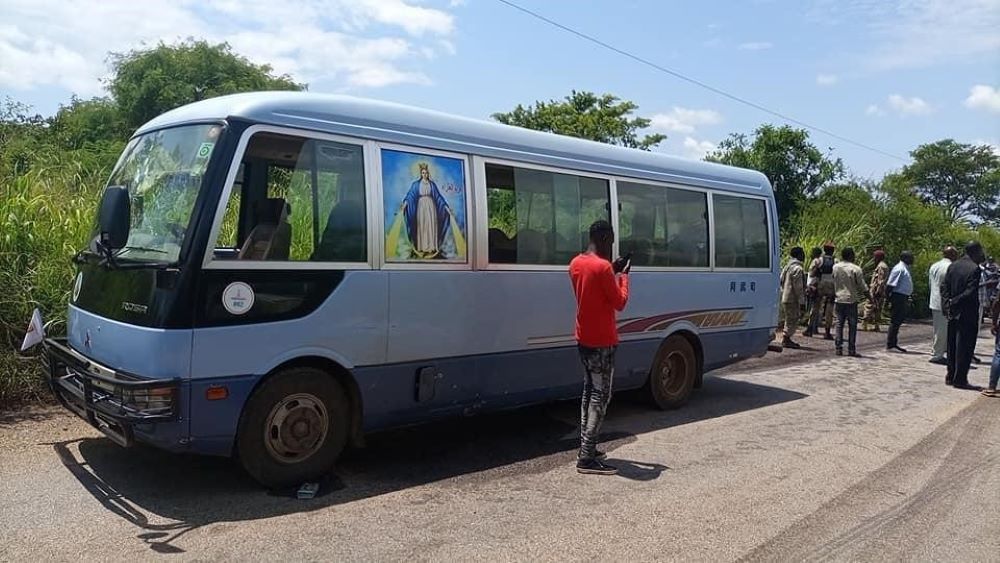 The bus that was carrying seven sisters and five men from the Torit Diocese to the Juba Archdiocese in South Sudan on Aug. 16, 2021 (Courtesy of Christine John Amaa)

This is very much a work in progress, so please let us know of any errors that need to be corrected by writing to us here. One of our biggest obstacles has been finding photos of the sisters that we can get permission to use, so help with that aspect is also welcomed. We've used a symbol of a dove for sisters for whom we do not yet have photos.

On a personal level, this is a project I have long wanted GSR to undertake. I pray the rosary often, and in doing so, I pray for my litany of saints, those officially recognized by the Catholic Church as well as for my parents, dear aunts, other family members and friends whose lives on Earth have ended but whose souls we believe live on through the promise of Jesus Christ.

I've prayed for sisters killed who many have heard about: Ursuline Sr. Dorothy Kazel, Maryknoll Srs. Maura Clarke and Ita Ford, and lay missioner Jean Donovan, the women murdered in El Salvador; Sr. Dorothy Stang of the Sisters of Notre Dame de Namur; and Sr. Valsa John Malamel of the Sisters of Charity of Jesus and Mary and Sr. Rani Maria Vattalil of the Franciscan Clarist Congregation in India. I've prayed for Abut and Roba and for comfort for the members of their congregation and others who knew and loved them and benefited from the sisters' work.

It has long bothered me that sisters from smaller congregations, often in poorer countries without the resources or media clout of U.S.-based or international congregations, do not get as much attention and that their stories remain largely untold. Without taking anything away from those we know of so well, the sacrifice of the sisters from the small congregations — and the pain of their fellow sisters, families, friends and the communities they served — is no less.

Sometimes, other media or Vatican offices recognize them. Yet there are usually no scholarships or schools dedicated to their memories and few honors bestowed to them. This is an attempt to start to change that. May their souls rest in peace, and may their legacy live on.