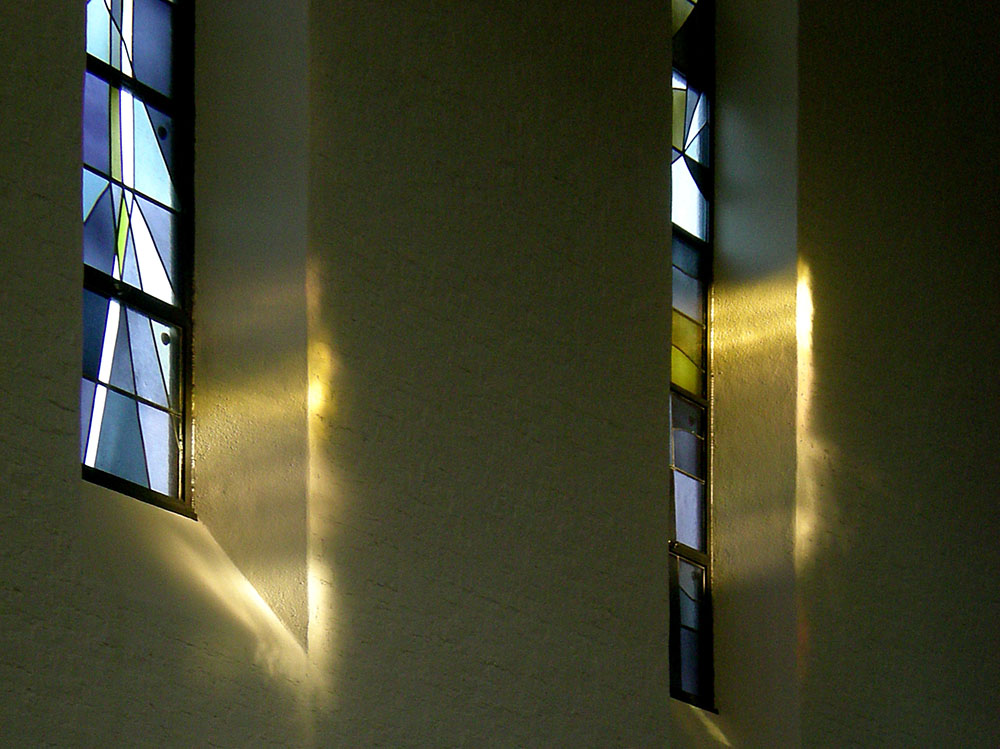 A beating heart that is larger than one's own.

An ecosystem of interconnected organisms, nourished by a common root structure and able to adapt to changing conditions.

These are among the images that emerged at a recent online gathering seeking to define the essence of Benedictine monastic life. The event, "Being Benedictine in the 21st Century: Spiritual Seekers in Conversation," was a first-ever effort to bring together vowed members, lay associates known as oblates, volunteers, staff and others who draw meaning from monastic spirituality and see it as a vital source of healing for an unsettled world.

The two of us, along with Sr. Judith Sutera of the Benedictines of Atchison, Kansas, spent three years planning this gathering. It arose as a grassroots effort not tied to any existing organization, but one that emerged from our shared love of the Benedictine tradition and a desire to see this critical conversation take place.

We were joined by 220 others representing 50 monasteries across the U.S. The insights we gained could well prove instructive for other congregations seeking a road map to navigate the needs of an uncertain future.

As Benedictines, we stand on the cusp of a new era — one that promises to be as significant as the 19th century, when monastic men and women crossed an ocean to address the spiritual needs of a frontier nation. Like many orders, Benedictines have written an exceptional story with our past. We have an important story to tell about the value of listening, community- and consensus-building, hospitality, humility, prayer and praise. Now we have a new story to create.

As Will Hunter, a 33-year-old who recently joined the Camaldolese monastery in Big Sur, California, told the gathering, "We don't have a map of where we're at or where we're going and so we need to learn off-the-map navigational skills. The monastic tradition began with a diverse range of experiments and that is what we need now. Our times call for it. Will we answer the call?"

The resounding answer from our fellow Benedictines is, Yes, we were made for a time such as this. 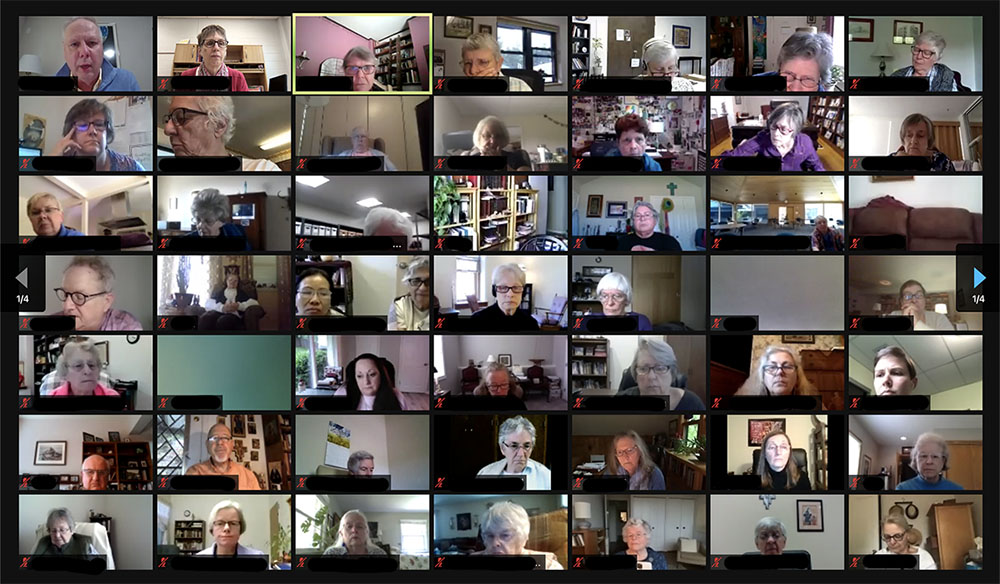 Screenshot of participants in "Being Benedictine in the 21st Century: Spiritual Seekers in Conversation," a recent online gathering seeking to define the essence of Benedictine monastic life (Courtesy of Mount St. Scholastica)

Like most religious communities, monastic life is facing an urgent flashpoint. As Sister Judith points out, "The luxury of slow deliberation is gone." Monasteries that included hundreds of members just a few decades ago are now "coming to completion," as many of them refer to the likelihood of closing. Some communities have decided to effectively die in place.

At the same time, exciting new trends offer cause for hope. Never before have so many laypeople been drawn to monastic practices. It's common for monasteries to have three times as many lay oblates (the word means "offering") as they do vowed monks or sisters.

Ways of living Benedictine life are also changing. Interdenominational communities have sprung up, as well as communities where both families and those vowed to celibacy reside together. Additionally, there are "dispersed" communities whose members take the same vows and follow a common Rule but remain largely self-supporting and live on their own.

Traditional monasteries are also changing — for instance, adapting the time-honored Liturgy of the Hours — based on the Psalms — to more closely reflect the critical issues and prayer needs of our time. Increasingly, communities are allowing Oblates, volunteers and young, unaffiliated seekers (so-called religiously unaffiliated "nones") to live with the monastic community for extended periods without the expectation of joining permanently.

A key strength of Benedictine life is that it "has always been about the presence of God in this time, our time," Sr. Joan Chittister noted in her keynote address. "It does what needs to be done when it needs to be done."

Fortunately, we have a timeless guide to give us direction. Spiritual seekers have drawn wisdom from the Rule of St. Benedict for some 1,500 years. The Rule remains a modern-day version of what the ancient Celts called an anam cara — a soul friend that offers itself to us in different ways at various moments in history and of our lives. As Sister Joan observed, the Rule is about both "being a Benedictine" and "being Benedictine."

To be a Benedictine, means "to be a card-carrying member of one of the most long-standing spiritual institutions in the church," Sister Joan said. But being Benedictine involves the heart and soul. It means bearing Benedictine values through time, "shaping them to fit the age they are in." It requires us to "mean something real today, to shine a light into today's darkness."

How, then, might we shape being Benedictine to meet the urgencies of this age?

One theme that emerged is the need to rethink the traditional roles of oblates and vowed members. It must not be either/or, but both/and. As one participant observed, "Instead of oblates thinking of themselves as being nourished by vowed monastics, they must find a way to 'feed' the spirit of monastics as well."

Oblates expressed the desire for greater education in the Benedictine tradition. They want oblate directors who are vowed members to prepare them to take eventual leadership of their own ongoing formation.

Both groups recognize an imperative to foster greater diversity, by ensuring that non-Catholics, people of color, and those within the LGBT community feel welcomed into what one participant called "our big Benedictine tent." Because monastic life pre-dates the schism in the Christian church, many stressed the importance of deeper collaboration with people of other faiths.

The sense of loneliness and isolation created during the pandemic year also came through clearly. Some monasteries still remain closed to guests. It has meant neither guests, nor oblates nor vowed members can interact personally at Sunday liturgies, community prayer, or in spiritual direction — activities that remain highly meaningful for each group.

Many communities responded by moving swiftly to online Zoom encounters and retreats. The possibility of continuing to communicate online an even wider scale — across monasteries, for instance — was another recommendation.

There is also a pressing need to share the Rule in ways that are meaningful to young people who are not necessarily institution-oriented, but care deeply about inclusivity, racial equality, care of the environment, and creating community — all key Benedictine values. "Ask them, 'What do you seek?'," one participant recommended, "rather than inviting them to 'what is.' "

As for rapidly emptying monasteries, a potential solution is to turn them into centers for learning, culture and spiritual direction, albeit with a smaller contingent of vowed lifetime community members. It is the way many monasteries functioned in the past.

Fortunately, Benedictines are used to challenges. Alone among religious orders, Benedictines take a vow of conversatio morum — conversion of life. Conversatio isn't a single, speedy change of course, but a steady, continuous process. In the 21st century, as in the past, that process will require creators and doubters, sacrifices and compromises, leaders and followers and, most definitely, a willingness to adapt. It will take steady attention, repeated trial and error, a willingness to fall, and the strength to rise again.

"We all belong to the monastic heart," said Katie Gordon, 30, a co-founder of the Nuns and Nones group for religiously unaffiliated young adults and a staff member of MonasteriesoftheHeart.org.

"But we can't hold on too tightly to one model, or we will stifle where the Spirit is leading us," she adds. Wise advice coming from the young.