The future of religious life means real work on racism and a focus on vocation, formation 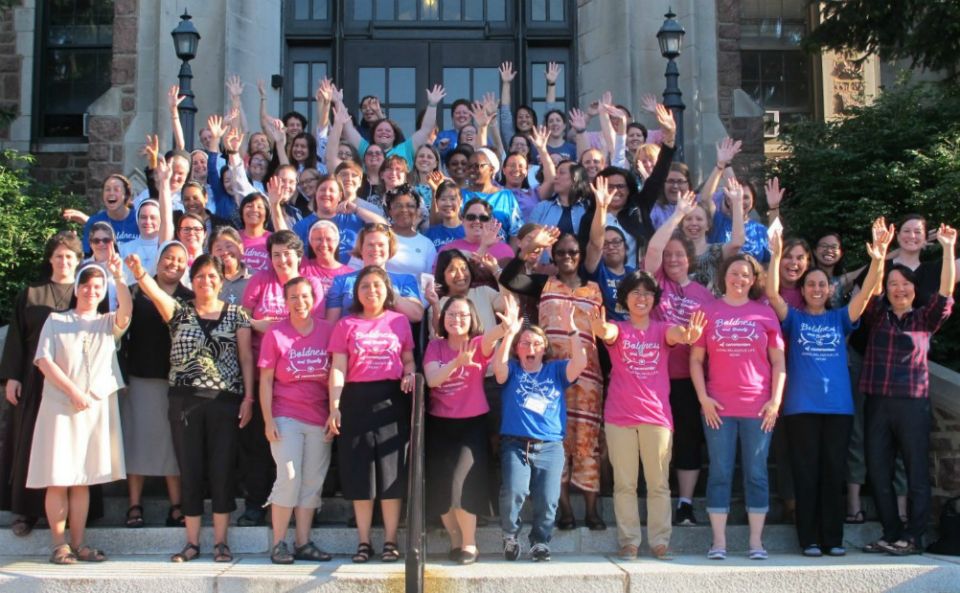 Sisters could gather in person last year for the Giving Voice national gathering. The 2019 event was in St. Louis. (Courtesy of Giving Voice)

I recently participated in the national gathering of the U.S. Leadership Conference of Women Religious (LCWR) as a member of Giving Voice, an organization of younger women religious. In recent years, LCWR has welcomed a few Giving Voice members to participate in the table discussions— this is how I ended up attending the virtual gathering.

I was very moved in particular by the presidential address given by Congregation of St. Joseph Sr. Jayne Helmlinger; I have reflected on it often since then, in light of my own vantage point but also my hope for the future of religious life. Sister Jayne's address had an overarching theme of vulnerability that she explored under four main sections, but I will collate them into two.

We can no longer ignore the magnitude of racism — not only in this nation but globally — as events over the past few months have continued to lay bare this virulent sin. Racism is an extremely difficult subject to tackle; from what I have discovered through personal experience, this is perhaps the worst thing you could infer about a person. However, the walk of discipleship that we took upon ourselves at baptism and recommitted ourselves to as vowed religious has never been an easy one. Racism exists in our congregational histories, in some of our policies and in our communities.

One hallmark of current formation gatherings and seminars is the topic of interculturality. I doubt that there is any newer member in the past 10 years who hasn't attended a seminar or talk on this topic. However, interculturality within our communities is an impossibility until racism is addressed. When many newer members in religious communities continue to be the first Black, Indigenous and People of Color members (BIPOC), the impetus lies with the predominantly white older members to unpack their complicity with racism, but also to learn about interculturality in order to create a hospitable and safe environment for newer members.

Teaching the diverse and newer minority group of members about interculturality does not result in any real change in their lives, because they are also the group with the least power in congregational dynamics. Despite great strides in leadership, formation and discernment styles over the years, power — whether positional or inferred — is still a function of religious life today.

This power weighs heavily on newer BIPOC members in congregations especially when viewed in relation to their previous experiences and encounters with white power in their lives. It cannot be and should not be the role of Black and Brown members to educate others on their prejudices and biases: That burden lies with the rest of the congregational members who in the U.S. context tend to be predominantly white. This (even more so when new members are calling out such bias) may result in negative repercussions for the new members — which I am sad to say, is a real consequence that many other newer members have shared with me at different times.

Even as we invite facilitators to educate us on anti-racism work and interculturality, we have to create sacred spaces where newer BIPOC members can speak honestly of the racism, both overt and subtle, that they have encountered in their time with our communities, because our first responsibility lies with them even as we look to tackle structural and systemic racism in society. However, an emphasis needs to be placed on the safety of those members when they do share their stories because they are extremely vulnerable.

Religious life today, tomorrow and into the future

The religious life of tomorrow is already here with us. The newer members amongst us will be thrust into leadership positions within a very short time, by virtue of congregational demographics but also because many newer members do come in with life and leadership experience already. It is to this that we need to pay urgent attention now, so that they in the coming days will have the ability and skills to continue to hold space for the endless possibilities of an unknown future. COVID-19 has demonstrated just how unpredictable the future might be; we can make plans and speculate, but that would be preempting the Spirit. Perhaps acquiring flexibility and agility is what the "now" and "next" requires. Just as social distancing forcibly thrusted us into more creativity about how to meet and socialize, it also demonstrated that endless possibilities are possible if we are open to them.

What are the needs of the much fewer and newer, younger members and those of our majority older members? How can we ensure that both are met? I have been in many forums that are trying to discern what is next in religious life, but my personal belief is that vocation and formation work has to be prioritized in religious life in order to prepare for that "next."

What does the world demand of religious women at this point in time? Theological education, yes, but also perhaps a second or third language. A different cultural experience as the world becomes a global village, so that one can experience the vulnerability of being the other, the minority. What skills do those journeying with newer members need in order to prepare them for a future that is unknown within the church and greater society?

We also need to trust the vision in newer members, and the dreams that God the dream maker has placed within their hearts. Religious life has always been about taking risks: Our histories and achievements stand as a testament to the change and good that is possible when that happens. Just as many congregations entered into a time of experimentation after Vatican II, allowing members to explore new ways of doing mission and being in new ministerial settings — the time we are in is asking for the same. It is imperative that religious congregations encourage and support newer members in experimenting with new ways of responding to God's call.

They need to explore the road less travelled, which demands greater intentionality in order to fan the embers for mission that lie in the hearts of newer members. The familiar needs of the world continue to grow as new ones emerge. Just as religious women originally responded to the health and education needs of 19th and 20th century — transforming themselves with each passing era — we find ourselves at the cusp of a new era precipitated by changing demographics in our religious communities and an extraordinarily dynamic world with previously unseen levels of suffering. And we need to act. We need to start living the future now, and we need to do so with a sense of urgency.

[Sr. Mumbi Kigutha, a member of the Sisters of the Precious Blood - Ohio, was born and raised in Kenya. Currently, she is based in Chicago, Illinois, as a part-time international consultant for the reconciliation and social cohesion department of the Jesuit Refugee Services.]

Religious Life | The future of religious life means real work on racism and a focus on vocation, formation