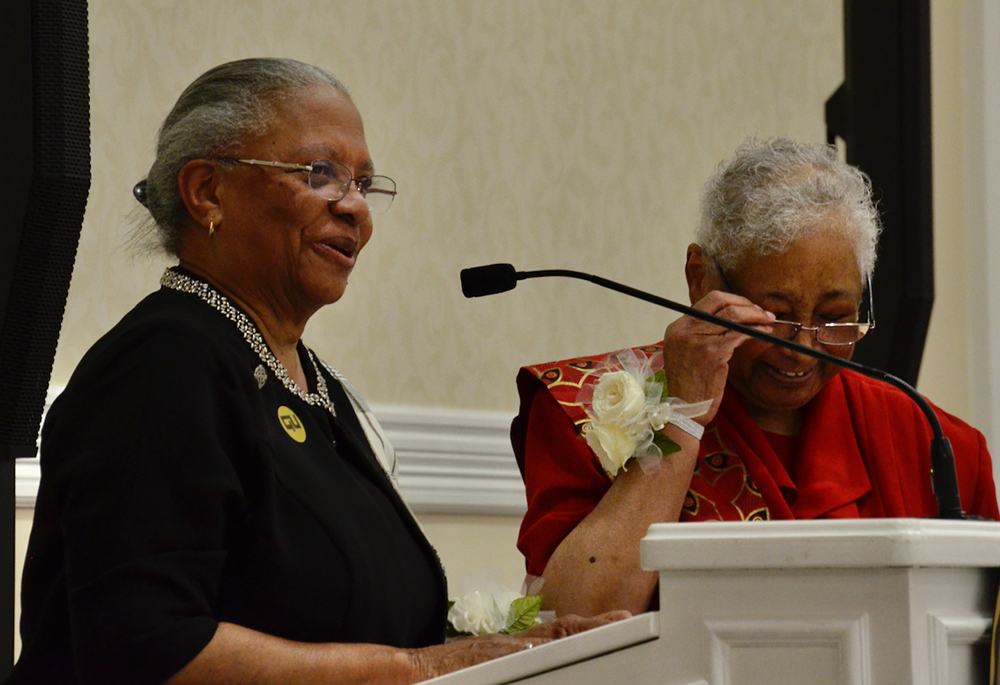 Sr. Addie Lorraine Walker of the School Sisters of Notre Dame speaks July 27 to members of the National Black Sisters' Conference, which gathered July 23-28 at the University of Notre Dame. Walker was elected president of the group at the meeting. At right is outgoing president Sr. Josita Colbert. (GSR photo/Dan Stockman)

The new president of the National Black Sisters' Conference closed the group's annual gathering with a rousing, passionate call for Black sisters, clergy, deacons and seminarians to stand with her as a witness that Black lives do matter.

Sr. Addie Lorraine Walker of the School Sisters of Notre Dame was elected to lead the 54-year-old conference at the group's joint meeting with three other Black Catholic groups and also received the conference's Harriet Tubman Award, which honors inspirational leaders.

In her remarks accepting the award on the gathering's final evening July 27, she returned repeatedly to one of the conference's themes: "Sawabona," a South African greeting meaning "I see you."

Walker said she would only accept the award if those in the banquet hall would accept the responsibility that comes with being Black in a white-dominated American Catholic church.

"If we can stand together, then I accept this award," she said. 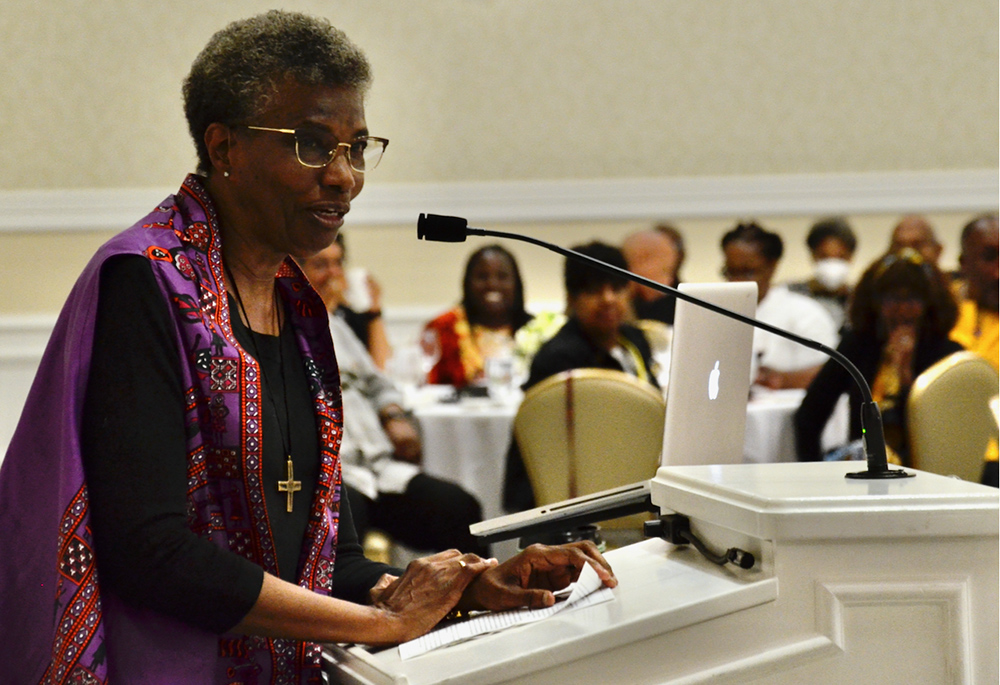 Sr. Patricia Chappell of the Sisters of Notre Dame de Namur speaks July 27 to members of the National Black Sisters' Conference at the University of Notre Dame. (GSR photo/Dan Stockman)

In an earlier interview, Walker said she plans to focus her presidency on helping Black people stand up for themselves in a society and institutions built on racism.

"We need to be leaders, to help Black people affirm ourselves rather than waiting for others to affirm us," she told Global Sisters Report. "We're claiming a new space for ourselves with a new energy to revitalize our community."

This was the first time in two years the groups gathered in person, and many said it was especially meaningful to be physically together.

"We're coming together at a critical time because of all we've been through [in the last two years] and the challenges we will continue to face," said Sr. Nicole Trahan, a Marianist sister and columnist for GSR who was elected secretary. "This is an amazing opportunity to come together and learn about how we can meet the needs of the Black Catholic community."

Sr. Anita Baird of the Daughters of the Heart of Mary, who just finished a term on the National Black Sisters' Conference's board, said the gathering showed both the challenges and the opportunities for Black sisters.

"Unfortunately, we still have as much work today as we did in 1968, when we were founded, and in some ways more work — institutional racism is more insidious," Baird said. "We're polarized as a nation; we're polarized as a church. It's important for us to gather as Black Catholics to model what the church should look like."

Founding member Sr. Barbara Beasley of the Congregation of Our Lady of Charity of the Good Shepherd pointed out the many young faces in the crowd.

"We've come back to the presence of many, many young Black members," Beasley said. "We need to recognize they have as much to give as they have to learn."

"Most often, we're in religious communities where we are one or two [Black sisters] in the whole community," Lumas said. "We need each other to be our best, true and whole selves."

Sr. Gwynette Proctor, a Sister of Notre Dame de Namur, said being physically together after so long "enriches my soul."

"We didn't know how badly we needed that," Proctor said. "Zoom is just not the same." 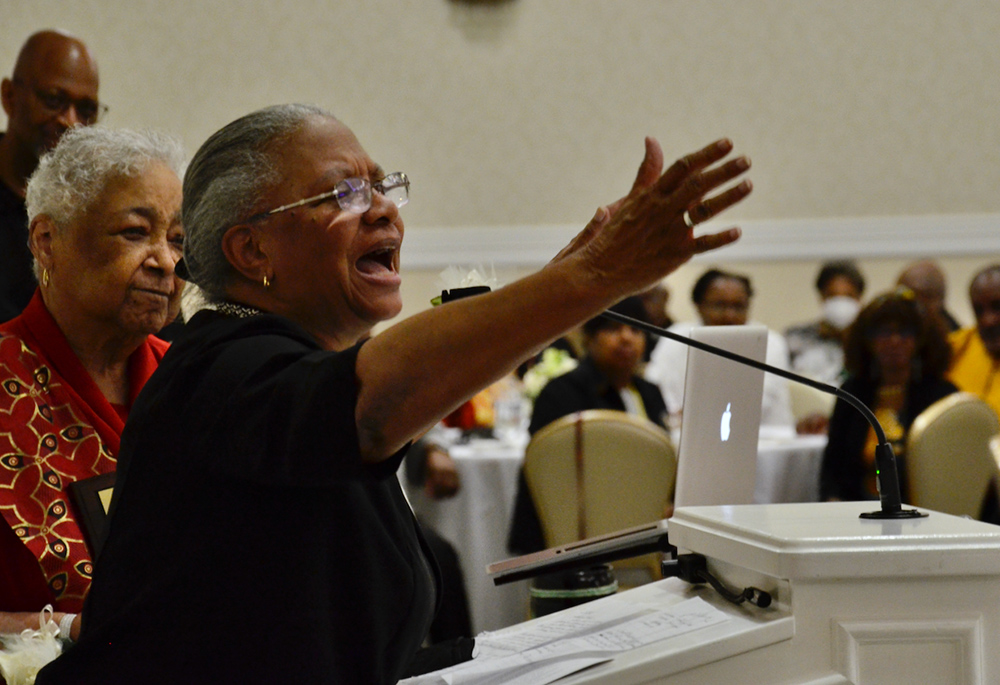 Sr. Addie Lorraine Walker of the School Sisters of Notre Dame speaks July 27 to members of the National Black Sisters' Conference, which gathered July 23-28 at the University of Notre Dame. Walker was elected president of the group at the meeting. (GSR photo/Dan Stockman)

Walker grew up in Texas, where her grandmother enrolled her in Catholic school. Her Methodist parents denied her request to become Catholic — she says she was attracted by the "smoke, bells and foreign language" at Mass — but she kept asking until they relented. She earned a bachelor's degree in chemistry from Southwest Texas State University in 1971 and worked as a research chemist before entering her community in 1976.

She is a theology professor at the Oblate School of Theology, founding director of the Sankofa Institute for African American Pastoral Leadership, and one of the authors of the Leadership Conference of Women Religious' book on the apostolic visitation, Power of Sisterhood.

Walker said as president, she also plans to focus on another conference theme: "Ubuntu," a Bantu word meaning "I am because we are."

"We need to have that openness with each other, with God, with the church, and with the world," she said.