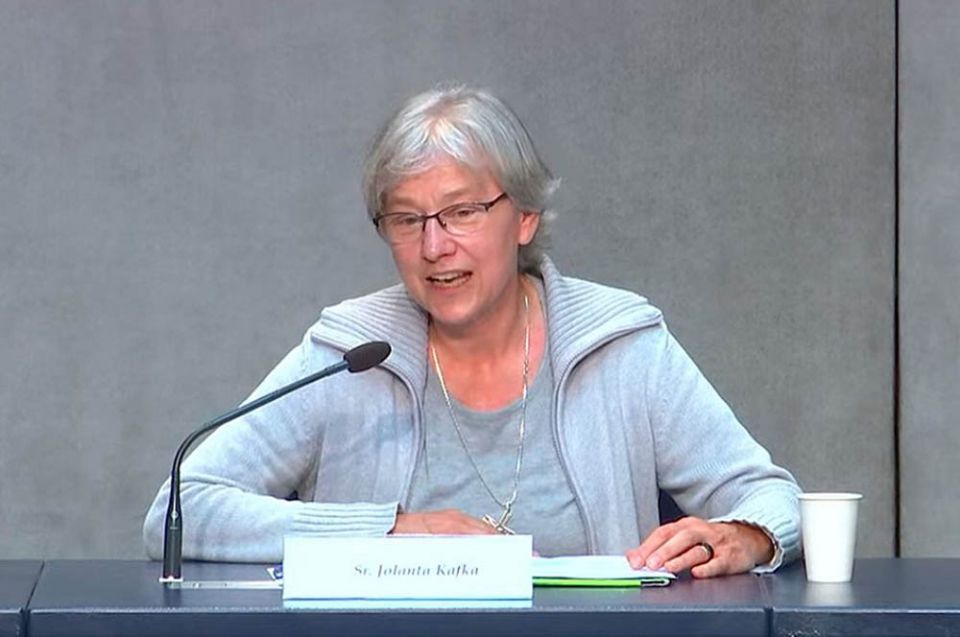 Claretian Sr. Jolanta Kafka, president of the International Union of Superiors General, speaks to reporters April 29 at the Vatican about the UISG plenary assembly to be held May 2-6 online and in Rome. (CNS/Vatican Media)

Rome — The 2022 plenary assembly of the International Union of Superiors General (UISG), which runs May 2-6, will continue the core themes of vulnerability and synodality, with more than 700 leaders of women religious congregations participating, about 520 of them in person.

The meeting comes at a historic time in the church, as Pope Francis has called for a synod on synodality to bring the church back to its early roots. The church is in a "listening phase" as religious congregations, parishes and other groups grapple with the vision of a church that is more welcoming to those on the margins in a process leading up to the Synod of Bishops on synodality in 2023.

With a wave of new appointments of religious sisters inside the Vatican, Pope Francis is making room for more women religious to have a permanent seat at the table. Many sisters spoke with Global Sisters Report about the importance of these changes.

The assembly, held every three years, will also bring together sister leaders worldwide for the first in-person UISG meeting since the start of the coronavirus pandemic. Through the pandemic, religious congregations have dealt with deaths of members, forced isolation of sisters used to living in community, and financial strain.

The pandemic "has made our fragility even more evident," Sr. Jolanta Kafka, UISG president, said in her remarks at an April 29 press briefing at the Holy See Press Office. The general superior of the Claretian Missionary Sisters has been a member of her congregation's general council since 2000 and was elected for a five-year term as superior in 2017.

The meeting takes place as war rages in Ukraine and other conflict areas in the world, underscoring the vulnerability of human experience.

Every religious family needs to "respond to the cry of God in the needy and fragile," Kafka said, according to a Vatican News report. Often, "we have placed ourselves on the side of the needy from a position of power."

Religious life is also "going through a moment of crisis," Kafka said, according to the Vatican News report. Women religious must "reinterpret the exercise of leadership — the mission of authority as service — in the spirit of the Gospel and the synod."

Two online sessions have been held leading up to the in-person assembly, with the final online closing segment slated for July 11.

In preparation for the plenary, UISG communications officer Patrizia Morgante interviewed 10 superiors general for a series of video interviews to explore the theme of "Embracing Vulnerability on the Synodal Journey."

This journey means living "the communion of different charisms, participating and sharing experiences, and pooling resources for the mission that today requires synergy, inclusion, and integration," Sr. Franca Zonta, superior general of the Marianist Sisters, said at the April 29 press event, according to Vatican News.

Zonta said synodality challenges Catholics to bring about a "change of mentality" and a "new way of conceiving leadership."

Sr. Mary John Kudiyiruppil, an Indian member of the Missionaries of the Holy Spirit and vice executive secretary of the UISG, told reporters at the April 29 press briefing, "Religious congregations are experiencing vulnerability from several quarters," including the obvious decline in numbers in many parts of the world. 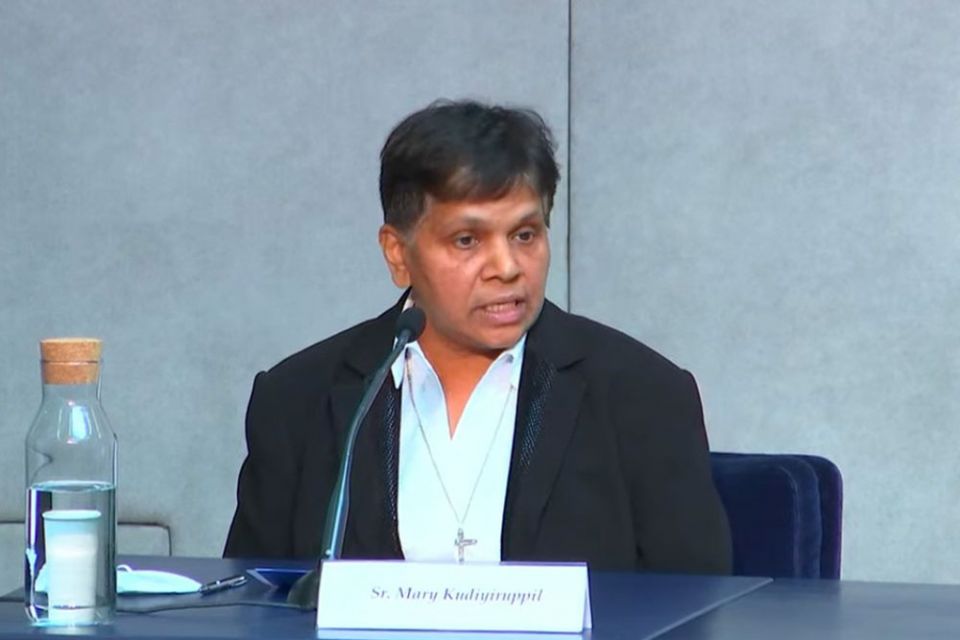 Sr. Mary Kudiyiruppil, a member of the Missionaries of the Holy Spirit from India, speaks to reporters April 29 at the Vatican press office about the plenary assembly of the International Union of Superiors General, which will meet in Rome and online May 2-6. (CNS/Vatican Media)

But also, she said, "we experience vulnerability from the inner structure of religious life itself, exposed as we are to questions, challenges and attacks. We are being asked tacitly or aloud about our professedly coherent positions and values and the inconsistencies in practice."

"For example," she said, "we profess to have our safety and security in God and a life of detachment, but sometimes in practice, we worry, we amass, we keep gathering things, etc."

"The intergenerational challenge," is another vulnerability, she said. "Our younger members are asking questions that were not asked previously about our relevance, and they are asking for change."

But, she said, "it is important to note that the plenary theme says 'embracing' vulnerability, which is different from merely tolerating or enduring or lamenting."

At the April 29 press event, Loreto Sr. Pat Murray, UISG executive secretary, highlighted some of the projects the group has launched or began participating in since its last plenary in 2019: Catholic Care for Children International, which promotes placing children with families instead of orphanages in several African and Asian countries; the Commission for Care and Protection with the men's Union of Superiors General; and the Laudato Si' Action Platform to support those living Pope Francis' call to ecological conversion.

UISG will launch two new initiatives on May 9 focused on the needs of elderly sisters worldwide, she said.

"The UISG, together with the [U.S.] Leadership Conference of Women Religious, will focus on the needs of individuals living with some form of cognitive impairment, especially Alzheimer's," she said, although she did not provide details. "The second focus will be on the care and support of elderly sisters in general. In many parts of the world, women religious have no social security or health insurance. In addition, they were often in pastoral ministries and received no payment."

The assembly also takes place amid a rising profile for UISG as an organization and for sisters being appointed to Vatican positions.

Participants in this plenary come from 71 countries, mostly from Europe, where many of the congregations' generalates are based. The country most represented in Africa is the Democratic Republic of Congo. In Asia, sisters will be primarily from India, which has the highest number of sisters worldwide. In North America, most sisters are from the United States; in South America, most come from Brazil. UISG has more than 1,900 members in 97 countries.

An academic look at the Apostolic Visitation