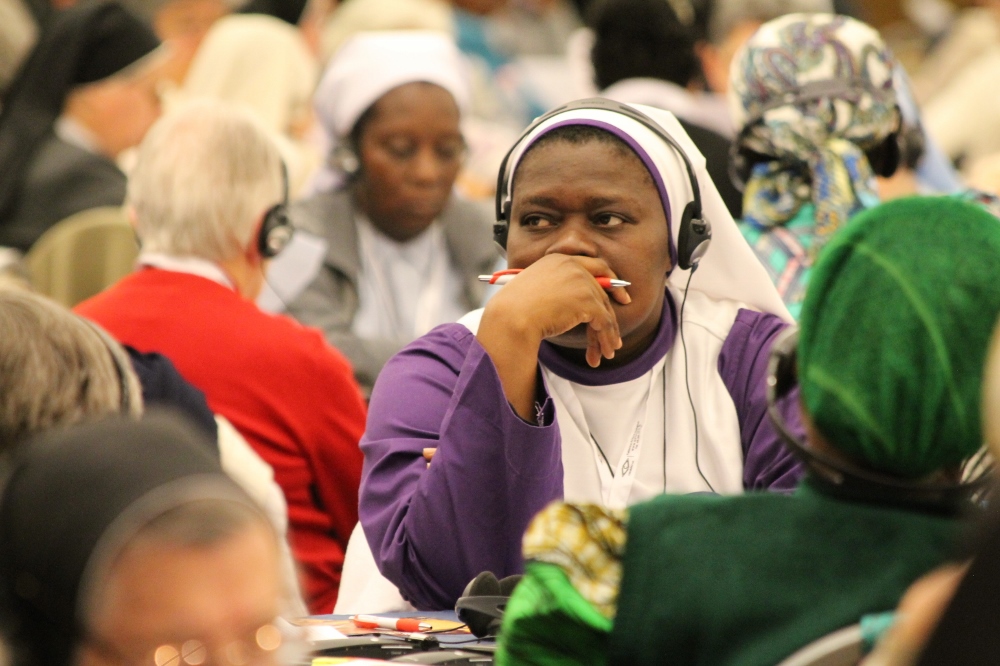 Sisters listen to speakers May 6, 2019, at the International Union of Superiors General's plenary assembly in Rome. (Courtesy of UISG)

"Embracing Vulnerability on the Synodal Journey" is the theme for the 22nd plenary assembly of the International Union of Superiors General, which starts March 14.

For the first time, there are four meetings for superiors general: two online, March 14 and April 4, prior to the in-person meeting May 2-6 in Rome, and a final online meeting July 11.

"The theme we have chosen for our Plenary is a prophetic invitation not to be afraid to welcome and to embrace vulnerability, both within the experience of the Church and of the world; so that the journey we follow as consecrated women, accompanying our sisters and brothers, may become an ever more synodal journey," Sr. Jolanta Kafka, general superior of the Claretian Missionary Sisters and president of UISG, said in a March 11 press release. "Listening to the Superiors General share their stories of vulnerability experienced as persons, congregations and in missions, we realize that the synodal communion encourages us to live it with our diversity and communion."

Almost 600 superiors from 60 countries have registered for the triennial assembly, and simultaneous translation will be provided in 12 different languages. UISG has 1,903 members whose generalates are in 97 countries.

To explore the theme, 10 superiors general were interviewed about what it means to be vulnerable and synodal by Patrizia Morgante, communications officer for UISG, and the videos posted to the organization's website. Two common points emerged from these interviews, the press release noted: First, fragility and vulnerability, underscored by the pandemic and the declining number of sisters, "invite us to focus on what is essential and to be increasingly closer to our sisters and brothers," the press release said. Second, "synodality is a style specific to women's religious life in terms of governance and discernment."

"I believe the synodal path has been learnt by consecrated life from its very beginnings," Sr. Juana Ángeles Zárate, superior general of the Carmelite Sisters of the Sacred Heart, said in her interview, according to the press release. "It is a fact that in order to walk together, we must look at each other and embrace each other starting from our unique existential condition: which is the vulnerable human condition. I view synodality as an indispensable path and a unique method to journey together."

The theme of the assembly "will engage us for the coming three years in joint reflections, establishing common practices of being together as an ever more synodal Church," the UISG press release said. (The whole church is engaged in a synodal process, which Pope Francis opened in October 2021 and will conclude in an October 2023 meeting in Rome.)

Since 1965, UISG has offered a forum for leaders of congregations from around the world to meet. "We aim at building bridges and networks, in order to create new strategies that allow women religious to communicate across geographical distances as well as linguistic and cultural differences, so as to be in mutual communion and build a global community together," the press release said.

The theme of the assembly emphasizes that "when you embrace vulnerability, when you listen deeply, when you walk beside others, you are called to change," Sr. Patricia Murray, executive secretary of UISG and a member of the Institute of the Blessed Virgin Mary, said in the press release. "So, in some way, at this Assembly we are called towards some sort of change. What is it? I don't know. It is not a planned change.

"And that is what the Synodal journey is about," she added. "Be prepared to be surprised by the Holy Spirit. Being synodal, means walking together. If I walk together with another person, I really want to encounter and truly listen to him/her. I am specially called to listen to the voices with whom I don't particularly agree. It's easy to listen to those who agree with me, it is much harder to listen to those who have different perspectives, different visions or different ways of viewing life or the world."