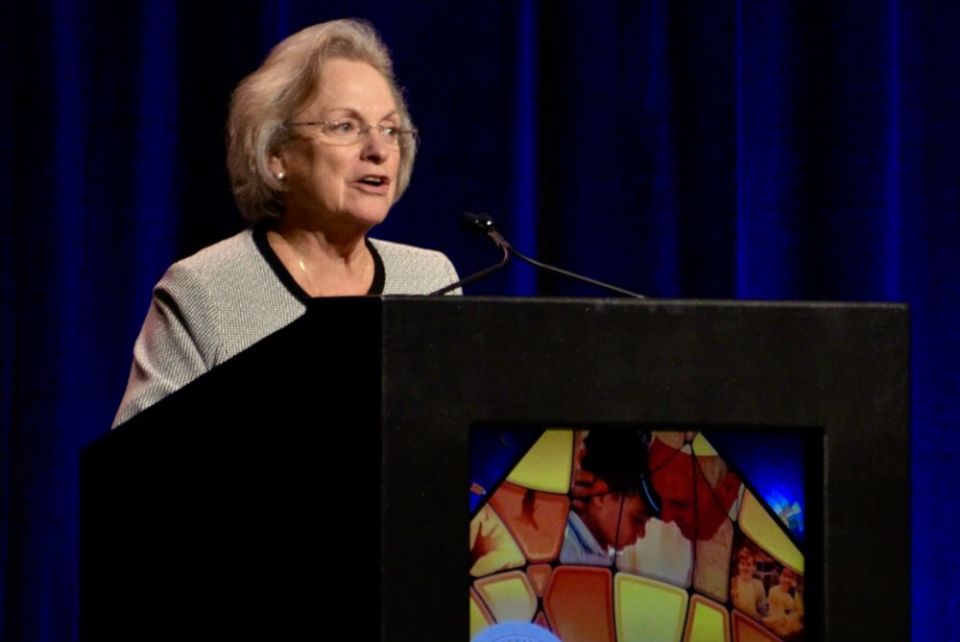 Dallas — At this year's Resource Center for Religious Institutes gathering Oct. 1-4, nearly every session had a workshop dealing with some aspect of moving toward completion, such as the importance of archiving a congregation's history or dealing with aging and obsolete buildings.

Three years ago, the topic was present at the annual conference, but there were only a handful of workshops and the subject was a delicate one.

The atmosphere has changed from fear to how to prepare for the future, whatever that future may be, said Mercy Sr. Sharon Euart, RCRI executive director. Approximately 600 registered for the conference, and almost 200 vendors attended, as well.

Pimentel, a Missionaries of Jesus sister, is executive director of Catholic Charities of the Rio Grande Valley in Brownsville, Texas, where she runs the Humanitarian Respite Center, caring for migrants released by U.S. Immigration and Customs Enforcement and U.S. Border Patrol. More than 150,000 migrants have passed through the agency's doors since 2014. 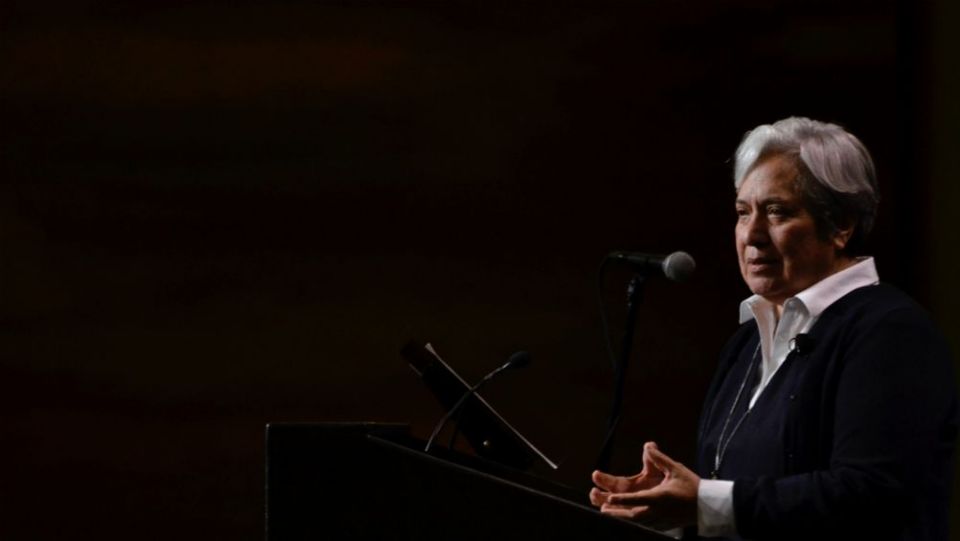 Pimentel said people often ask her how she deals with the pain she sees every day and what she does to forget.

"But I don't want to forget," she told conference attendees. "We can't forget."

Pimentel said the United States has a moral obligation not to forget the children in detention, separated from their parents; the hopeless mother fearing deportation, knowing she has no home to go back to; or the father weeping before a statue of Mary, grateful to be in a place where his family is safe, cared for, warm and fed.

"It's not Republican or Democrat," she said. "It's people, and they're hurting. ... We must tear down the walls of fear, the walls of hatred, the walls of indifference, and build a culture of encounter."

To preserve a record of a congregation's legacy, Malachy McCarthy said religious congregations also need to build archives if they don't have them and to organize and protect them if they do. McCarthy is the province archivist at the Claretian Missionaries Archives USA-Canada in Chicago.

He said while many think of archives as only about the past, they are really about documenting for the future the faith of those gone before.

"Archives reveal the heart of our religious vocation," he told a workshop.

Another way congregations can preserve their charism is to ensure they are being good stewards of their resources, and one workshop presented a case study of the Sisters of St. Francis of Assisi in Milwaukee and their multi-year effort to build a new convent.

The community has 161 sisters, mostly in their 80s, and is projected to have only 18 sisters by 2039. Their campus was a jumble of buildings constructed more than 150 years ago. Sisters were living in tiny rooms with communal bathrooms and major fire hazard concerns.

As Steve Petitt from GROTH Design Group walked attendees through the planning process, he noted that one of the challenges they faced was that the sisters wanted their new convent to be Franciscan, meaning the rooms would be small and simple.

"But we also knew the facility was going to outlast them," Petitt said. "So how do we make it an asset" that would be valuable to a buyer when the sisters no longer need it?

The answer was to design Franciscan-style rooms that with easy renovations can be combined to create a modern apartment for senior or assisted living. The building was also constructed to the higher standards required to allow it to be licensed as a senior care facility in the future.

"In 20 years, when there's 18 of us, we won't be able to manage this," said Sr. Charlotte Roost. "Remember, your legacy is not your buildings."

Roost also shared the news that though the plan had called for renovations to the chapel, there isn't enough money, so it will be torn down, leaving the campus without a dedicated worship space.

"It's painful. This is the place we took our vows, the place where we worshipped," Roost said. "But it's reality."

Another reality is climate change, Sinsinawa Dominican Prioress Sr. Toni Harris told another workshop. The community in rural southwest Wisconsin has nearly a half-million square feet of buildings on 450 acres of land — a large carbon footprint. 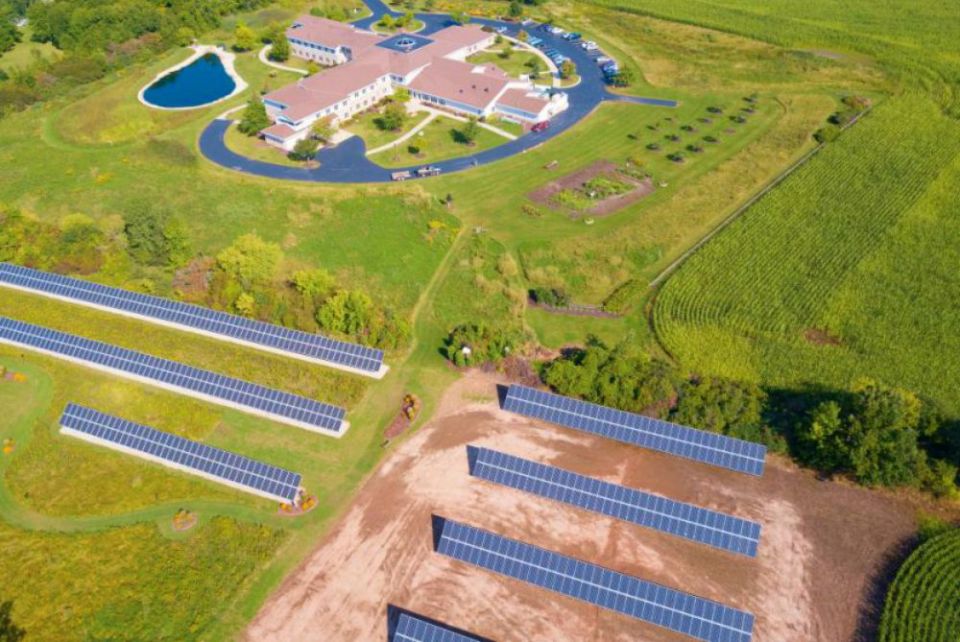 An aerial view shows solar panels installed near the motherhouse of the Sisters of St. Francis of the Holy Cross in Bay Settlement, Wisconsin, Sept. 5. The Sinsinawa Dominicans also have installed solar arrays and are converting some of their land to prairie and protected forest. (CNS/The Compass/Sam Lucero)

They have installed solar arrays and will convert 15 acres of manicured lawn to prairie, and they hope to restore most of the savanna ecosystem and restore and protect over 50 acres of forest. In 15 years, Harris said they expect to have about 130 sisters — down from about 380 today — and only about 15 of those will be under the age of 70.

They could build a new, efficient facility for their aging population, but the population in the region is sparse.

"There will not be a sufficient number of people in southwest Wisconsin after our need declines" to fill a health care facility, Harris said, "and if we were to build it, there's not enough health care workers to staff it."

The congregation is in the midst of a planning process to find the best way to care for the sisters, care for the land, and protect the planet in the process. They announced this summer they will move more than 120 sisters needing assisted living to existing facilities near Madison, Wisconsin, and they expect many buildings on the campus, which has been home for more than 170 years, will be torn down. The fate of their Queen of the Rosary Chapel, which seats 700, is still unknown. 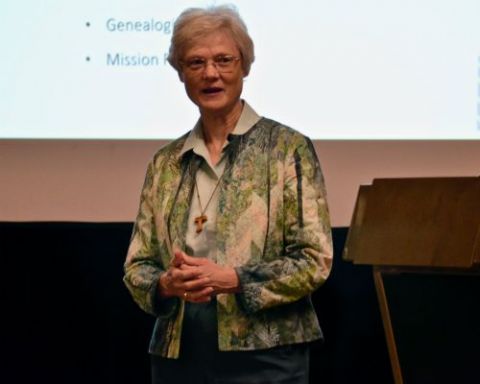 Sr. Charlotte Roost, of the Sisters of St. Francis of Assisi in Milwaukee, Wisconsin, talks about the planning process her congregation undertook to build a new convent. Roost was addressing a workshop at the Resource Center for Religious Institutes' annual conference Oct. 3 in Dallas. (GSR photo/Dan Stockman)

Sr. Amy Hereford, a Sister of St. Joseph of Carondolet and a civil and canon lawyer, gave a workshop on leadership for communities approaching completion, noting that even if a congregation is financially sound and its land and buildings are taken care of, there will come a point when there are no sisters able to assume leadership positions.

"That's why I prefer collaborative efforts," she said, "because you can create a pool of candidates for leadership."

Because every community and its circumstances are different, there is no one answer, she said.

"Each one's documents and arrangements are going to be different," Hereford said. "We can learn from each other, but each one is going to be unique."

Hereford said planning ahead is the key, including plans for a community's assets so they are either properly cared for, transferred to another entity with a similar mission, or liquidated to provide for remaining members or be given to another entity.

"There is a fear out there that I often hear that at the end, the bishop is going to come and take all your stuff," Hereford said. But even for diocesan-rite congregations, that does not have to be true.

Sisters have property questions, and a Notre Dame program can help with answers