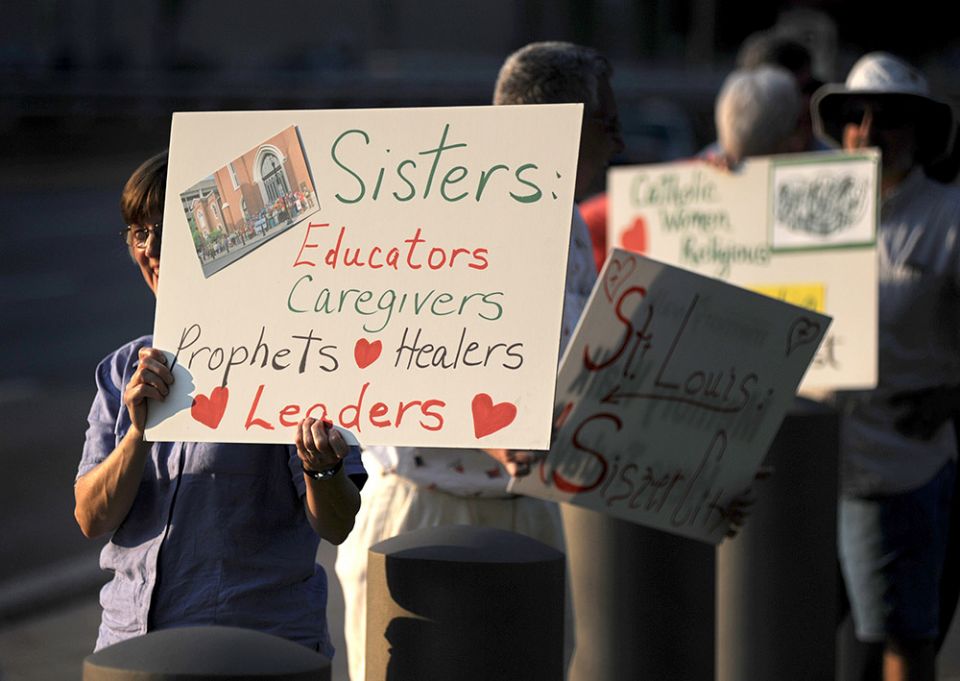 Laity and religious hold a rally in support of nuns gathered for the August 2012 assembly of the Leadership Conference of Women Religious in St. Louis. Earlier that year, the Vatican's Congregation for the Doctrine of the Faith had ordered reform of the organization. (CNS/Sid Hastings)

Editor's note: This series, written by a member of the Pontifical Commission for the Study of the Diaconate of Women, addresses questions related to women religious and the ordained diaconate. This is the fourth of five essays — the next and last installment will be published Feb. 11. Please join us Friday, Feb. 12, at 2 p.m. Central time, 3 p.m. Eastern, for "Witness & Grace: A Conversation with Phyllis Zagano and Sr. Colleen Gibson" focusing on highlights of this series. Click here to register.

Much has been written about women's religious institutes being "outside the system" and thereby freer to act on behalf of the people of God. Significant discussion within and without these institutes echoes the thought of the second sister to speak with Pope Francis at the May 2019 UISG triennial meeting, who said she was not interested in ordination. For a variety of reasons, many women religious do not wish to be associated with the clergy in any way, and argue that ordaining or incorporating women clerics (deacons or priests) as members would destroy their institute's charisms. Others, however, believe ordination would complement their charisms and expand sisters' ministries.

Both outlooks, women religious distancing themselves from the clergy and the women religious hoping for ordination, seem to have troubled the Roman Curia and a few U.S. bishops during the papacy of Benedict XVI. In late 2008 and early 2009, the Vatican announced twin investigations of U.S. women religious. Each one, the apostolic visitation of U.S. apostolic institutes and the Congregation for the Doctrine of the Faith's review of the Leadership Conference of Women Religious (LCWR), ended after the election of Francis.

The head of the apostolic visitation, Mother Mary Clare Millea, at the time the Rome-based superior of the Apostles of the Sacred Heart of Jesus, was asked to find funding for the evaluation of some 341 U.S.-based units of women's religious life then comprising some 57,000 sisters. Cloistered nuns were not part of the review. 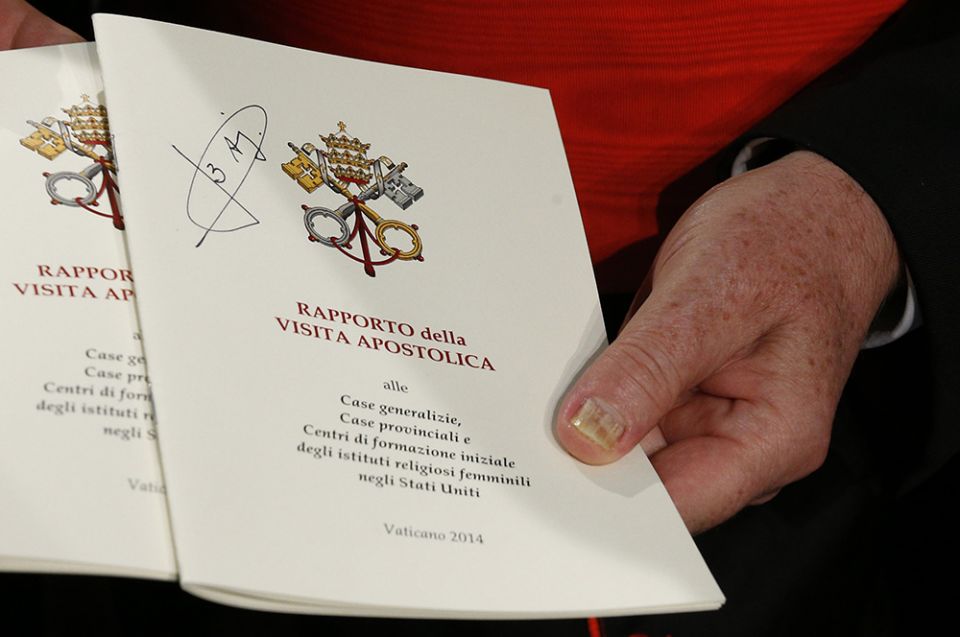 The final report of a Vatican-ordered investigation of U.S. communities of women religious is seen a December 2014 Vatican press conference. (CNS/Paul Haring)

Her December 2014 report was by and large positive. While the findings noted the aging population of women religious (at the time, mid-to-late 70s), declining numbers, and fewer vocations, the report emphasized the sisters' general respect for their elected superiors, their developed community life, and their respect for the prayer of the church. The institutes were lauded for their financial stewardship and their support of elderly members. For its part, the Leadership Conference of Women Religious said the visitation reinforced the beliefs of various institutes:

While the Vatican's decision to conduct an apostolic visitation caused great pain and anxiety for many Catholic sisters, our members frequently speak of how our experience of the study became the source of profound transformation for our institutes. The process led us to study the heart of our vocation as we engaged one another in significant conversations that explored our spirituality, our mission, our communal life, and our hopes for the future. As we did so, our bonds with one another grew even deeper and our understanding of the potential of this life to serve the needs of the world grew even keener.

The investigation of LCWR mandated by the Congregation for the Doctrine of the Faith concluded before the apostolic visitation. The "doctrinal assessment," as it was called, focused on three areas of concern to the congregation: its view that LCWR assemblies presented "problematic statements" and "doctrinal errors"; its view that LCWR members and officers expressed corporate dissent regarding women's ordination and the pastoral care of homosexual persons; and its view that LCWR espoused what the doctrinal congregation saw as "radical feminist themes" incompatible with Catholic teachings. The congregation's complaint also found LCWR "silent on the right to life," by which it meant abortion.

In April 2012, the Congregation for the Doctrine of the Faith ordered LCWR to revise its statutes to demonstrate that it adhered to "the teachings and discipline of the Church." The congregation appointed now-retired Seattle Archbishop J. Peter Sartain as overseer for up to five years, assisted by Bishop Leonard Blair, then of Toledo, Ohio, and Bishop Thomas John Paprocki of Springfield, Illinois,* and an advisory team that, presumably, Sartain would name. (None of the three prelates is a canon lawyer or a religious.)

Cardinal William Levada, an American and then prefect of the doctrinal congregation, ordered Sartain have authority over LCWR especially regarding its statutes; plans and programs; use of liturgical texts; and affiliations with other organizations (especially NETWORK and the Resource Center for Religious Institutes.) A few months later, in July 2012, Pope Benedict XVI appointed then-Bishop Gerhard Müller as doctrinal prefect.

Sartain's mandate ended in 2015. Leadership of the doctrinal congregation and LCWR presented a joint report on the mandate's implementation.

The official niceties did not end the back-channel criticisms of women religious in ultraconservative social and other media, nor did it dampen episcopal support for newer, more conservative religious institutes of women, especially in the United States.

If anything, the combination of the two investigations hardened the view that the prophetic stance of women religious could only be lived outside the clerical system.

Even so, Amazon synod members spoke forcefully about women deacons, both inside and outside the synod hall, noting that some two-thirds of parish groupings in the Amazon were managed by women, predominantly by women religious. 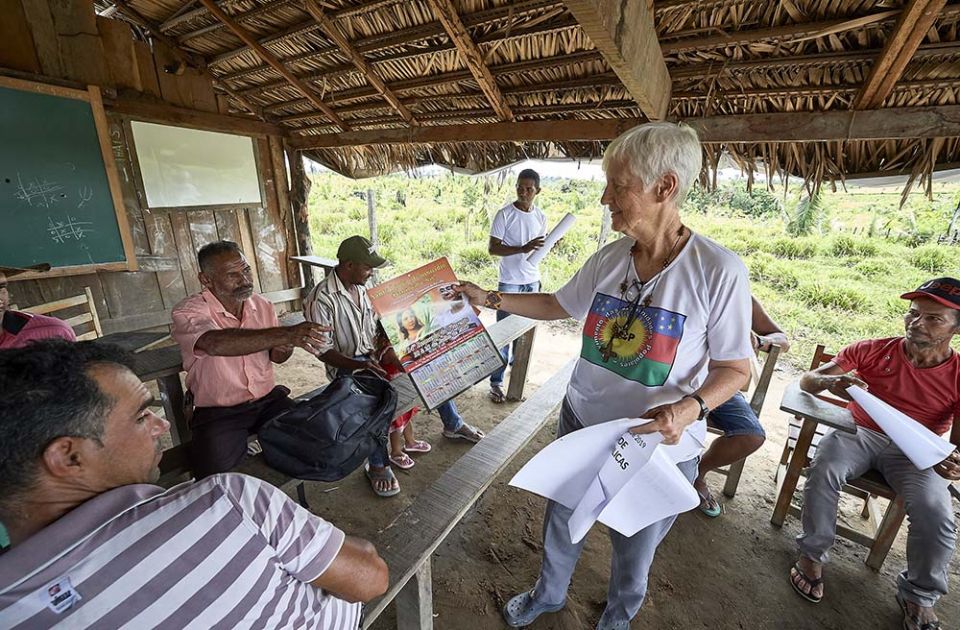 Notre Dame de Namur Sr. Kathryn "Katy" Webster hands out a calendar that promotes the Synod of Bishops for the Amazon to farmers in the countryside near Anapu, in Brazil's northern Para state, in April 2019. (CNS/Paul Jeffrey)

That fact alone speaks volumes about the Amazon, where the numbers of Catholics continue to decline. For example, a 2014 Pew Research Center survey found that 69% of the population in Latin America identified as Catholic, reduced from at least 90% in the 1960s. For the most part, younger, poorer, less educated people moved away from Catholicism and to evangelical Protestantism, and continue to do so.

Why? The so-called "prosperity gospel" is most attractive, or at least more attractive, to these former Catholics, especially they who are counted among the younger poor.

The question is not new. A few years ago, Jesuit Fr. Antonio Spadaro and Pastor Marcelo Figueroa, editor of the Argentine edition of L'Osservatore Romano, wrote about the prosperity gospel in La Civiltà Cattolica, which Spadaro edits. The prosperity gospel, they wrote, "is used as a theological justification for economic neo-liberalism." While their article is widely seen as a rebuke to Trump administration policies in the United States, its concerns apply as well to the Amazon region, where clear-cutting, overgrazing, and the polluting of air and water are justified by a "prosperity" that promises to assist the poor.

As the "prosperity gospel" spreads around the world, how would women religious and women ordained as deacons challenge it? Perhaps not easily, but they clearly would. While it is increasingly decried, clericalism among Catholic clergy is an obvious shadow to the "prosperity gospel," in terms of clerical "success" gauged by position, power and money. In too many places and too many cases around the world, clericalism is still an obvious part of the priestly class. The problem of clericalism is not new, but as it mirrors the promises of evangelical preachers, it presents a challenge to Catholic evangelization.

But women deacons are not priests, and women religious are particularly averse to careerism. Ordained or not, inside or outside the clerical caste, their ministries challenge the assumptions of the prosperity gospel and, coincidentally, the failures of clericalism.

*Due to an editing error, this article has been changed post-publication to correct Blair's and Paprocki's past and current geographical status.

Why I am optimistic