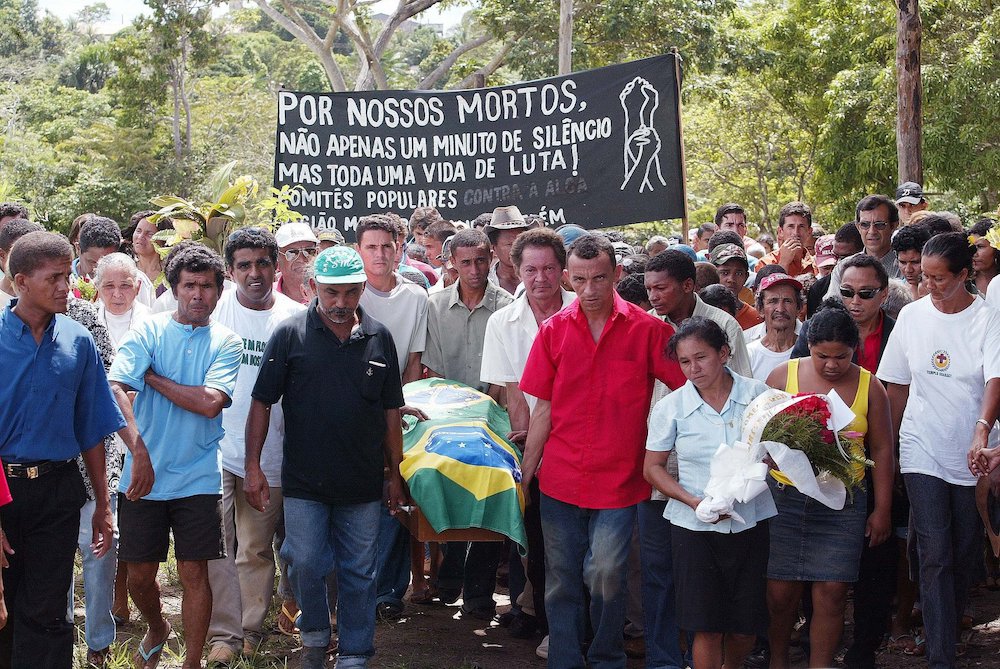 A new species of screech owl was recently discovered deep in the Amazon forest by a multinational team of researchers from Brazil, Finland and the United States. Dubbed the Xingu screech owl, the little creature was given a scientific name of Megascops stangiae in honor of martyred Sister of Notre Dame de Namur Dorothy Stang.

Stang was assassinated in 2005 in Anapu in Pará, Brazil, while fighting for the Amazon forest and its people. Her congregation as well as the researchers who discovered the new species say naming the owl after the woman who dedicated most of her life to the people of the Amazon region is befitting.

"It is fantastic that after 15 years, these scientists had this enlightenment to call this owl by the name of Dorothy," Sr. Judith Clemens, a Sister of Notre Dame de Namur and a friend of Stang's, told Global Sisters Report.

"She liked everything about nature, but at night, we would sit outside the house, look up at the sky and listen to the music of nature," Clemens said. "I think it is so beautiful that an owl, which is a nocturnal animal and a symbol of great wisdom, be the animal to honor her. Dorothy had that kind of wisdom."

"The tribute is symbolic of her life, her insistence on [fighting] deforestation and what deforestation did to all animals. She used to cry when she heard a monkey crying because there was no forest for them anymore," added Clemens, who met Stang when they were both working in Brazil even though they are from the same town in Ohio. 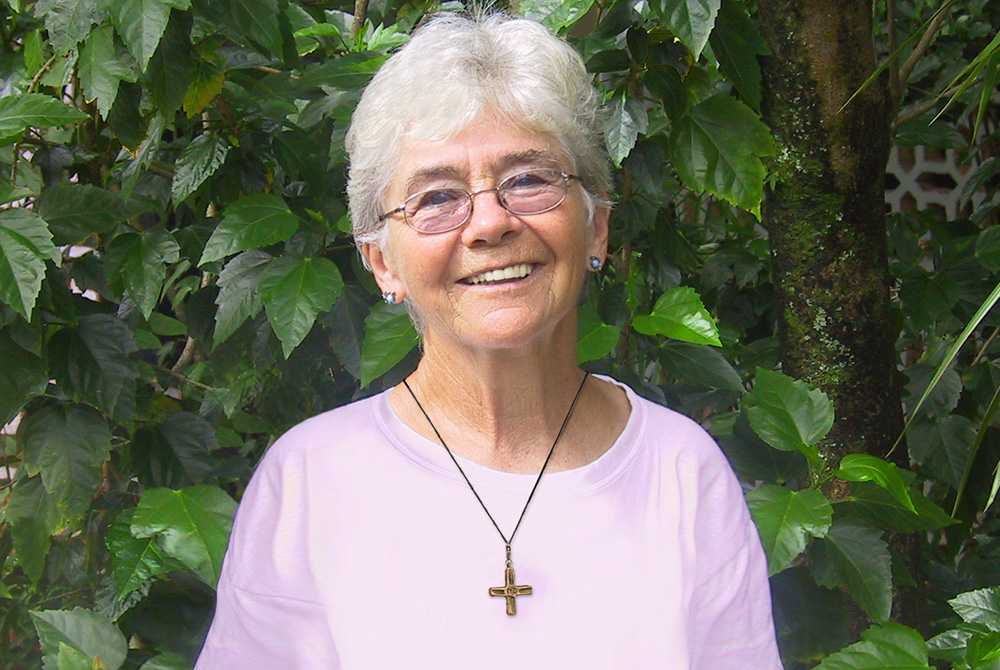 For Sr. Jane Dwyer, a Sister of Notre Dame de Namur who has lived in Anapu since 1999, the tribute is a way to warn people that they must keep the forest standing if they want to have animals and nature.

"We are nature, we are forest, we are Earth. If we kill all of this, we kill ourselves," she said.

The biologists who discovered the small bird say Stang's fight to preserve the forest made her a natural choice for the tribute.

"It is a way to honor [Stang] and her work and to bring attention to her fight to preserve the Amazon," biologist Sidnei Dantas told GSR.

Dantas used part of a four-year study on owls in the Amazon and Atlantic Forest regions as his doctoral thesis. The biologist said that like Stang, the newly discovered species is threatened by the current deforestation of the region.

"This particular owl needs the forest to survive. Where the forest is still untouched, it is commonly found, but Anapu is located in what is known as the 'Arc of Deforestation,' the agricultural frontier of the Amazon, an area being deforested rapidly," Dantas said.

Dantas said he hoped the naming of the species would help those trying to preserve the rainforest.

"It gives visibility," he said. "I think it's cool for the people who continue to work in the area, who carry on Dorothy Stang's fight, to know that there is a species named after her." 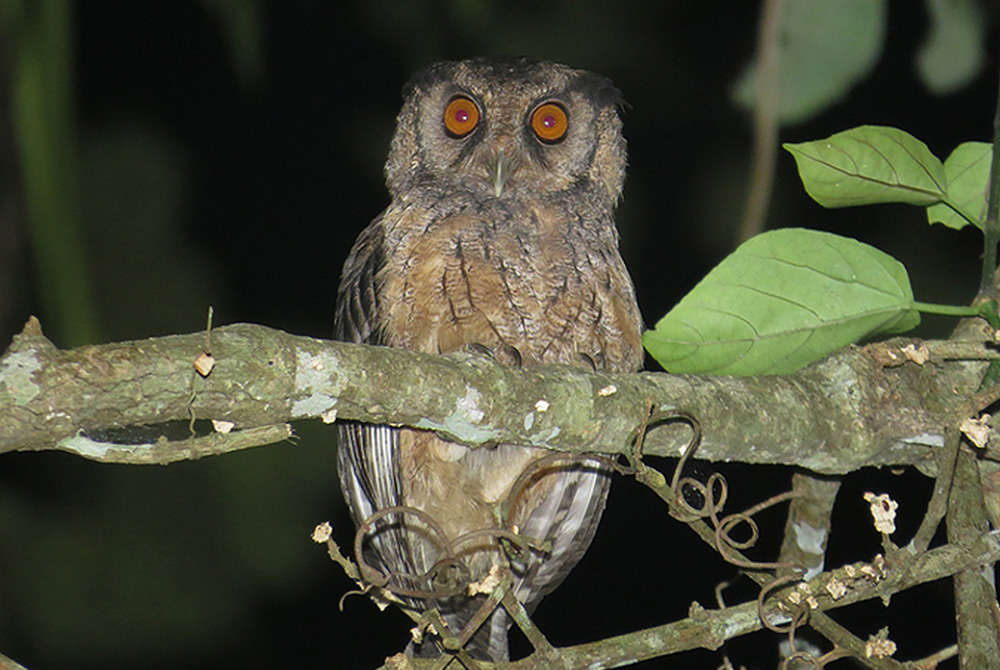 The Megascops stangiae discovered recently in the Amazon region was named after Sr. Dorothy Stang, who was murdered for her work in the rainforest. (Courtesy of Douglas Fernandes)

Although there were four researchers in the study, it was the professor overseeing the investigation, Alexandre Aleixo, who suggested the tribute. In 2005, when Stang was assassinated, Aleixo lived in Belém, the capital of Pará.

"Because this owl is prevalent to the region where Dorothy worked, nothing is more appropriate than paying this tribute to her. It is also a way to immortalize Dorothy's legacy," Aleixo said, adding: "By confronting everything and everyone that went against the forest, she ended up paying with her life."

Aleixo said Stang's work went beyond that of the church.

"Although she was a religious, she was an Amazonida [one who is born or lives in the Amazon region]; she was not a native, but she chose to be an Amazonida and became involved in these environmental issues," said Aleixo, who currently works as a curator at the Finnish Museum of Natural History in Helsinki.

Aleixo said Stang's work has inspired those beyond the Amazon region.

"It is clear that her message still inspires a much larger circle of people who are living off the land," he said. "Even scientists who are working with biodiversity and discover new species want to associate the species' names with hers because it is a common cause." 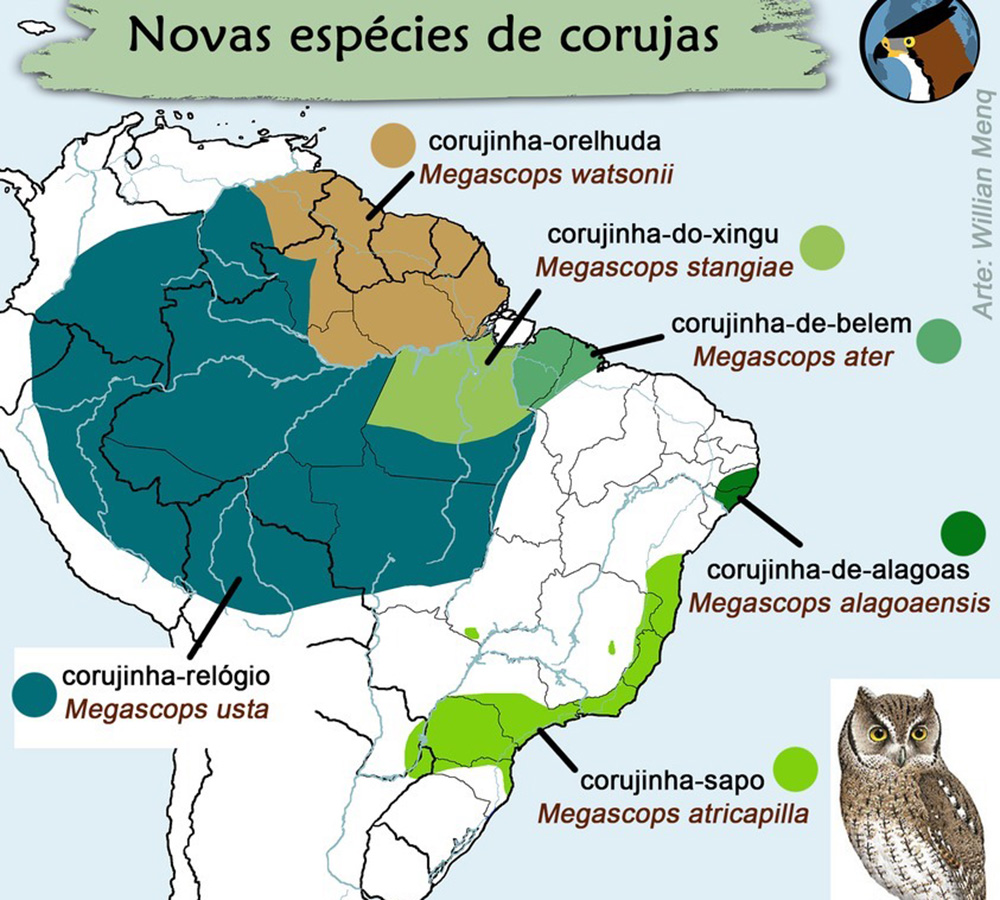 Map of recently discovered species of screech owls, including one named after Sr. Dorothy Stang, who worked in the Amazon region (Courtesy of Willian Menq)

Weind said Stang labored "uninterruptedly" for the rights of the family farmers harassed by illegal loggers and illegal ranchers.

"She was faithful and steady. She was unrelenting. She wanted the farmers to have what was their right [to have]," she said.

Weind said Stang tried every possible way to awaken the world to the fact that the Amazon forest is the "lungs of the planet."

Weind said the Brazilians who knew Stang said that when she died, they were not burying her, but "planting her."

"The implication there is of growth everlasting," Weind said. 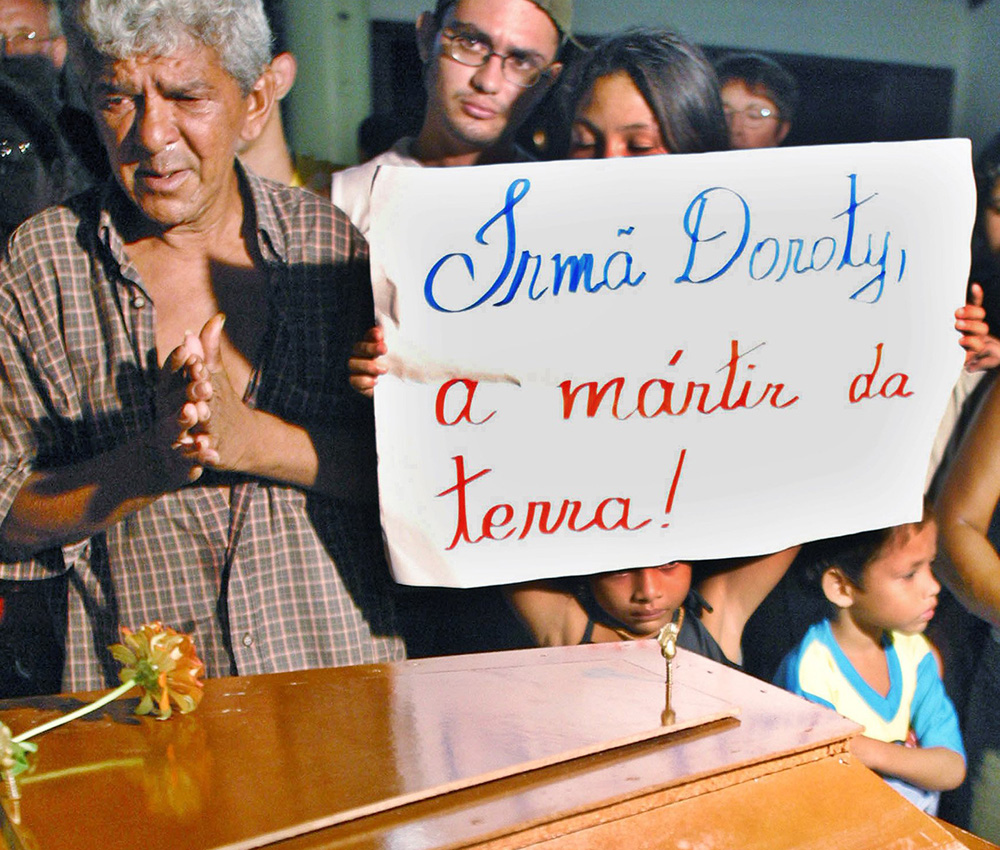 Those who knew Stang said planting and reforestation were a big concern to her.

"Dorothy always had seeds in her pocket to distribute," Dwyer said. "Still today, there are people who say: 'That cocoa came from the seeds that Dorothy gave me.' "

Clemens remembers Stang's special understanding of the way everything and everyone in the world is connected.

"When I was leaving Brazil, I visited Dorothy, and we visited some of the communities, and we walked along the paths off of the Trans-Amazonian Highway," Clemens said. "We were just immersed in nature. Dorothy was such a lover of nature and all of its aspects. Way before anyone was speaking of the interconnectedness of all of creation, she was already living that connection."

The Sisters of Notre Dame de Namur hope this idea of interdependency among all living creatures will be one of the things remembered about Stang.

"What we want to remain of Dorothy is the hope that a person can transmit to another person the value of creation and how everything in creation is interconnected," Clemens said. "Pope Francis' Laudato Si' has this same inspiration, but Dorothy lived this [interconnectedness] long before the term was used in theology."

And although keeping the forest standing was a high priority for Stang, the religious who worked beside her also recall the special care she had for those who lived in the region.

"Dorothy knew how to walk with the people, how to make people discover how to make their story," Clemens said. "She believed that the people had everything to write their own story. This gave a lot of hope to the people."

"There are a lot of people today in Anapu who never met Dorothy, who arrived later, but there is something about her spirit that is still there," she added. 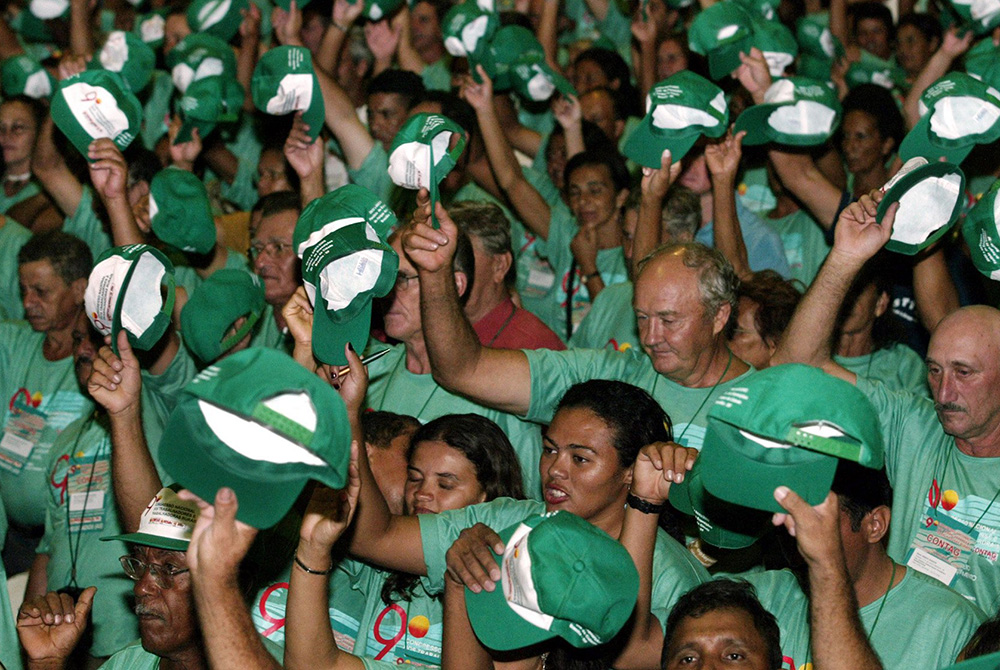 Members of Brazil's Federation of Rural Agricultural Workers pay tribute to U.S. Sr. Dorothy Stang, a member of the Sisters of Notre Dame de Namur, during a Feb. 28, 2005, meeting in Brasilia. The organization was meeting in Brazil's capital to discuss government agrarian policies. (CNS/Reuters)

Stang arrived in the Anapu region in 1982, almost 20 years after the roads to that part of the forest had been cleared. Dwyer said at that time, many residents wanted to leave the area, as they felt the government had abandoned them.

"They were dying of malaria, starving, without school, without health care, without anything," Dwyer said. "But when she arrived, she started to gather the people. She gave a lot of priority to education. If she had not arrived in '82 and done so, these people would be far away today."

Dwyer said she couldn't help but smile at the fact that Stang's name was now linked to that of a screech owl.

"Dorothy at that time was the voice of those people when it came to dealing with the authorities. She went [to authorities] and she talked, and she screamed, and she demanded," she said.

"It is said that God heard the cry of his people. Today, it is the people who cry out and complain, but back then, it was Dorothy who did the complaining," Dwyer said.

On Feb. 12, 2005, powerful ranchers from the region, upset with Stang's actions, hired two men to kill her as she walked along a dirt road in Anapu. In 2008, the United Nations recognized Stang's outstanding contributions to protect human rights and fundamental freedoms and honored her posthumously with the U.N. Prize in the Field of Human Rights.

"I hope the ranchers and farmers [who fought so hard against her] will be really upset in knowing that today, in their land, lives an owl with her name," Dantas said.