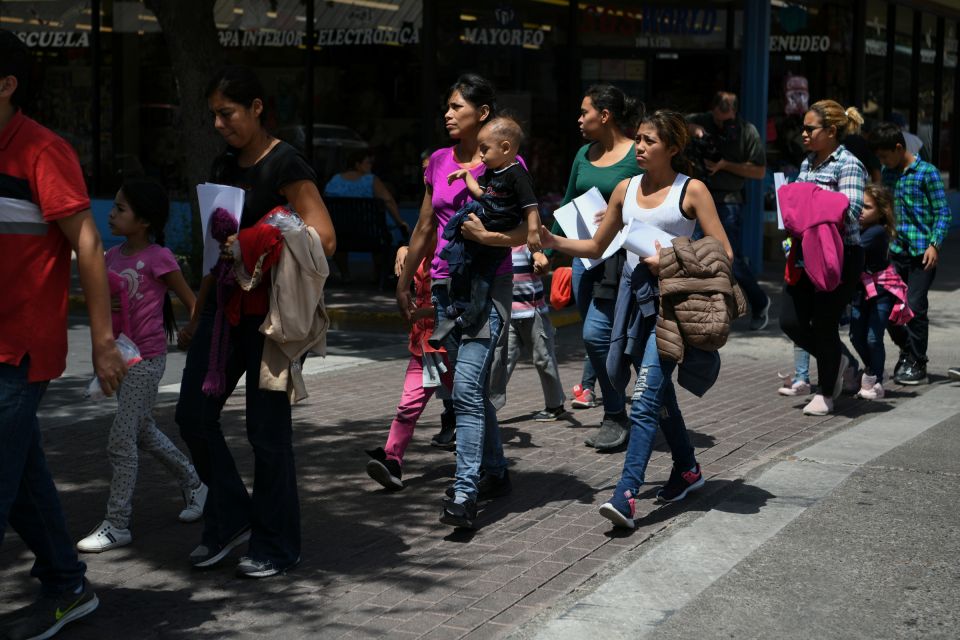 Right now, in America, we are seeing heart-wrenching images coming from the border: mothers crammed into jail cells with barely enough room to stand, frightened children sleeping on concrete floors in frigid prison cells, a father and daughter floating lifeless in the Rio Grande. Yet many Americans refuse to believe this is happening. Some say the media are lying. Others turn away saying, "They came illegally," or "Those aren't their real children."

The humanitarian crisis at our southern border has become controversial and politically polarized, causing many good people of faith to turn a "blind eye" to the needs of our Central American brothers and sisters. What Americans see when they look at images from the border seems to be determined not solely by the objective lens of their eyes, but by the lens of their affiliations and philosophies: Democrat or Republican, "liberal" or "conservative."

As an Associate in Mission of the Sisters of Saint Joseph (SSJ) of Philadelphia, I look at the world through the lens of the SSJ charism; I see "dear neighbors" in need and try to respond. I believe this is what Pope Francis means by a "culture of encounter." We see the needs of those around us, and choose to journey with our suffering neighbors, listening to their stories and being transformed by the experience.

In May, with three friends from the Center for FaithJustice (CFJ) in Lawrenceville, New Jersey, I spent a week at the Catholic Charities Humanitarian Respite Center (HRC) in McAllen, Texas, run by Sr. Norma Pimentel, a Missionary of Jesus.  I went primarily to meet and serve the migrant families, but also in hope of returning from the border as a credible eyewitness who could share my experience. Admittedly, I am not an unbiased observer; I don't know of anyone without an opinion on the immigration issue. But I have made every effort to truthfully recount what I saw and learned.

My week in McAllen left my heart broken, but as Rumi wrote, "The wound is where the light enters." I returned filled with love for the migrant families I met, who were not gang members or criminals, but fathers, mothers and children fleeing violence, organized crime, human trafficking and food insecurity. They were faith-filled people, who often asked God to bless me, and expressed to me their fears of being sent back, their hopes for safety in the U.S., and their desires to work and for their children to learn.

During the week we served up to 600 migrants a day, who had already endured tremendous hardships and danger on their long journeys from Central America through Mexico to the border. Through a translator, the people described conditions in the detention center, where they had been held in jail cells and slept on concrete floors with only a thin, foil blanket for warmth. Some shamefully apologized for their body odor because they hadn't been permitted to shower for days. Meals consisted of sandwiches and water. Their personal belongings were confiscated, even their shoelaces. Some tore strips from the foil blankets to lace their shoes or tie back their children's hair; I saved one strip to keep in my prayer book.

Once released by ICE to the Respite Center in McAllen, their hardships continued. The families slept on floor mats, showered in an outdoor trailer, used portable toilets and ate under the trees. They waited on seemingly endless lines for food, clothing and showers. It was hard to believe this refugee camp was in the U.S. and not a foreign country. The migrants were exhausted, and many were sick, but everyone was grateful and cooperative. To leave their homes, walk thousands of miles, risk their own and their children's lives and suffer so much: how could I not believe they were truly fleeing something even more terrible? 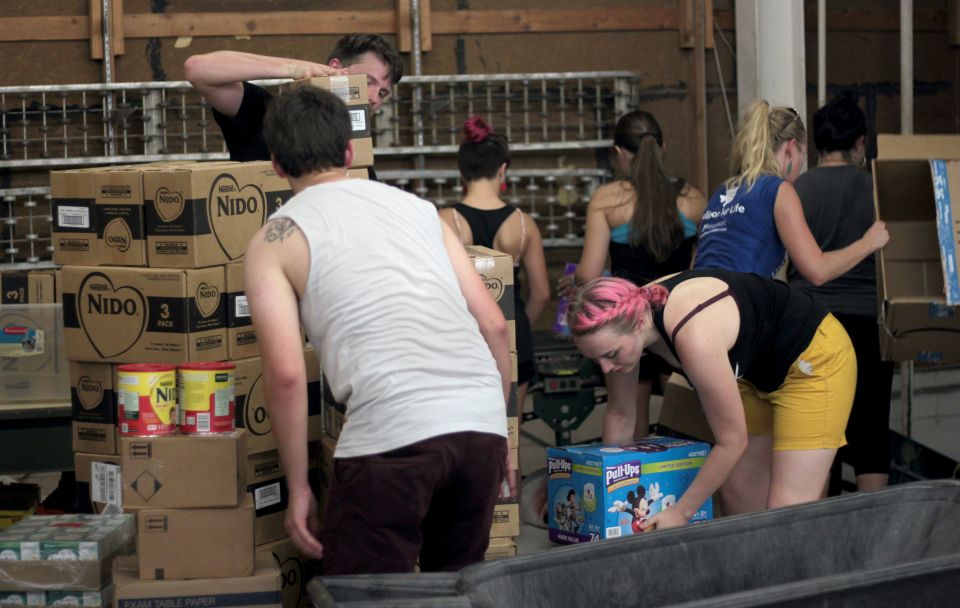 As a volunteer at HRC, I spent time making toiletry bags and greeting new arrivals; the arrival of each bus announced only by the sound of brakes squealing outside. Each bus delivered over 100 men, women and children who would quietly line up in the hallway. I smiled and greeted each person "Bienvenidos" and asked "Quantos niños?" in my limited Spanish so I could add extra toothbrushes to their bag. They all smiled and whispered "Gracias" as I handed them this meager offering, but I think they were mainly responding with relief to seeing a friendly face, perhaps for the first time since they had left their homes thousands of miles away.

Most migrants arrived with only the clothes on their backs, and the bags of donated clothing at HRC contained little that was useful. Thankfully, we had raised money before our trip, and each morning we shopped in local stores for new underwear, socks, shirts and pants to distribute. It was wonderful to offer a mother new clothing for her child and see pride in her eyes as a small bit of dignity returned. I was moved by the obvious love and tender care I saw parents giving their children. The children were sick, cranky and tired, but the parents were endlessly patient and concerned for them; I had no doubt these were real families.

On my last day, Border Patrol dropped off over 300 people as the Center was closing for the evening. We scrambled to get everyone toiletry bags. As I began to distribute them, I greeted the first women off the bus; three young mothers holding newborns, still wrapped in pink-and-blue-striped hospital receiving blankets. I needed a moment to compose myself, as I thought about these frightened young women, the age of my own daughters, going into labor in a detention cell, giving birth alone in a hospital, and being sent back to detention, to lie on a concrete floor nursing their newborn. I saw the face of Mary, herself a frightened young mother who gave birth to Jesus in abject poverty, and later became a refugee fleeing to protect the life of her son. I was truly encountering Christ and his Mother, in a hot, shabby, refugee camp, in McAllen, Texas. It was a deeply sacred moment.

"I was truly encountering Christ and his Mother, in a hot, shabby, refugee camp, in McAllen, Texas."

I returned home to New Jersey tired and sick with a stomach bug but went to Mass on Sunday and heard Jesus in the Gospel reading say, "Feed my lambs." I smiled as I remembered how I had done just that in McAllen, and I am now looking forward to returning in November. Meanwhile, I will advocate for the people I encountered, who are no longer just images on the news to me, but truly dear neighbors. I have visited the office of my Congressman, a prominent Catholic legislator, to share my experience and attempt to persuade him to set aside partisan politics and lead a bipartisan effort to address this crisis as a pro-life, humanitarian issue. And I continue to tell my story of encounter in hope of convincing other good people of faith to set aside partisan allegiances and personal biases and view the images from the border through the lens of faith and justice, responding from a place of shared humanity and Christian compassion. "Blessed are you who have not seen, yet have believed."

[Mary Vanderhoof is an Associate in Mission of the Sisters of Saint Joseph of Philadelphia. She lives in Hamilton, New Jersey, belongs to an SSJ Christian Growth Group and is a founding Board member of the Center for FaithJustice in Lawrenceville, New Jersey. Married for 36 years to her husband, Randy, she is the mother of three adult married daughters and has three grandsons. She has a MS degree in Physiology from Rutgers University, and retired following a 35-year career as a Medical Writing Scientist in the pharmaceutical industry. She is currently a Board member of three other Catholic non-profit organizations.]

Ministry | 'Seeing is believing' on the border

Good Friday hope bridges pain and love at the border