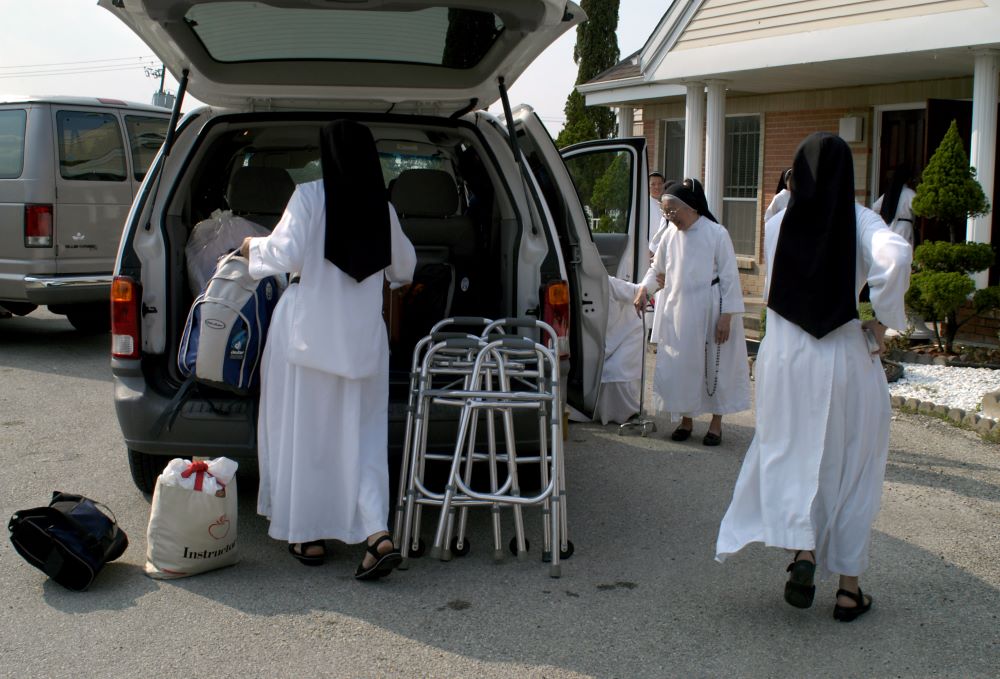 Every year before hurricane season starts, the leadership team for the Sisters of the Holy Family reworks the complicated logistics of their plan to evacuate more than 50 sisters and staff members from New Orleans in the event of a hurricane. Sisters retire to the New Orleans motherhouse, so the team has to prioritize the needs of older sisters in assisted living and skilled care.

Catholic sisters in hurricane-vulnerable areas are meeting the challenges of hurricane season as climate change accelerates the brutal impacts of storms that now have stronger winds, increased rainfall and higher storm surge. As they confront stronger storms, congregations are making investments in infrastructure and planning to make sure sisters stay safe and capable of continuing their ministries. Hurricane season in the U.S. officially runs from June 1 to Nov. 30.

This year, the leadership team for Sisters of the Holy Family came up with a six-page document that assigns each sister to a car and a driver should they need to evacuate. The plan also directs each sister to have two weeks' worth of medication, at least three changes of clothes, a flashlight, battery-operated radio, a bagged lunch and masks. The cars have a corresponding list of supplies, including safety items for the ongoing COVID-19 pandemic.

According to the plan, Sr. Alicia Costa, the congregational leader, will drive a bus from St. Mary's Academy, a pre-K through grade 12 school operated by the Sisters of the Holy Family. The bus can hold the wheelchairs and other supplies that the aging sisters need. 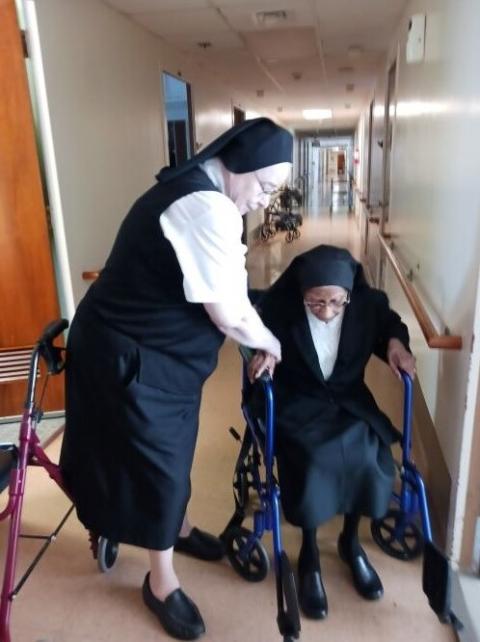 These evacuation plans are crucial, according to Joie Acosta, a senior behavioral/social scientist at the RAND Corporation. "One of the most common mistakes that people make when dealing with hurricanes is they try to stay in place and weather the storm," she said, urging sisters to follow evacuation orders if they are issued.

"We know that older adults are more likely to die as a result of a hurricane," said Acosta, who has studied disaster resilience for older adults. "If you look at Hurricane Sandy and Hurricane Katrina, almost half of the deaths were older adults," she said.

The Sisters of the Holy Family were founded in 1842 by Henriette Delille, a free descendant of enslaved people, at a time when New Orleans was the center of the U.S. slave trade. Their ministries include St. Mary's Academy, a nursing home, a preschool and two apartment complexes for low-income seniors.

In their meetings, congregational leadership also mapped out where sisters would go after evacuating, relying on Sisters of the Holy Family convents that are farther north in Louisiana and friends of the congregation in the Alexandria, Louisiana, area to temporarily house many of the sisters. Leaders had to evaluate the accessibility needs of sisters to make sure they would be safely housed. For instance, sisters who cannot climb stairs cannot go to the mission in Baton Rouge. For the sisters who need skilled care, the congregation has signed a contract with a nursing home in Alexandria.

'As women religious, we put ourselves in God's hands.'
—Sor. Arelis Marmolejos

"Hurricanes are not new to us," Costa said. "We lost everything in Katrina practically." GSR previously reported on how the congregation recovered from damage after Hurricane Katrina in 2005.

Although the congregation left New Orleans when the city recommended evacuation before Hurricane Katrina, they did not attempt to evacuate the Lafon Nursing Home until the city issued an evacuation order, at which point it was too late to arrange safe transportation. The nursing home, which had withstood previous storms and was equipped with a generator and supplies, lost 17 residents after the first floor flooded.

Now, the nursing home has a separate evacuation plan to take the 89 residents, including 18 older sisters, to another facility farther north. 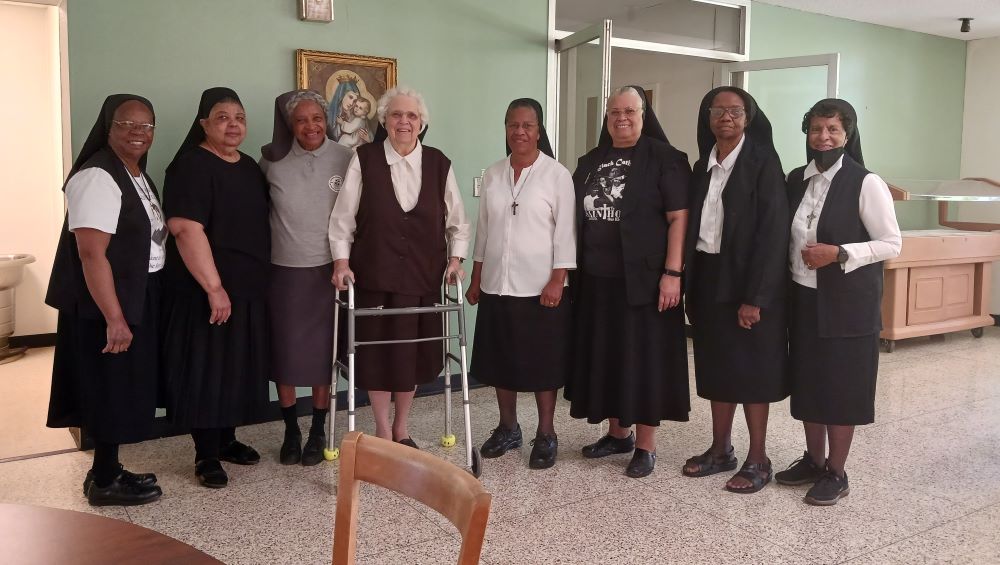 At a recent business retreat, the newly elected leadership team of the Sisters of the Holy Family planned for evacuation in case of a hurricane. From left to right are Sr. Jean Martinez; Sr. Rosalind Luciani Barbeneaux; Sr. Judith Therese Barial; Sr. Lawrence Hebetz (then-president of the Sisters of Mount Carmel in Lacombe, Louisiana, where the retreat was held); Sr. Theresa Sue Joseph; Sr. Alicia Costa, congregational leader; Sr. Geneva James, and Sr. Rachael Williams. (Sisters of the Holy Family)

Sr. Maria Theresa Nguyen, provincial superior for the Dominican Sisters of Mary Immaculate Province in Texas, remembers the difficulty of evacuating a large number of sisters. In 2005, evacuating for Hurricane Rita, the sisters from the provincial house in Houston spent 18 hours in cars on their way toward Dallas, a deeply uncomfortable ordeal for the oldest sisters who live predominantly in the provincial house.

"It's only in the midst of a dangerous situation that we will evacuate again," Nguyen said. The province now has 103 sisters. Houston officials, remembering the disastrously deadly Hurricane Rita evacuations, have hesitated to order mandatory evacuations since then. The congregation will follow mandatory evacuation orders.

The sisters feel equipped to ride out storms because they are on high ground and located near a flood control park. They also keep a well-stocked pantry and two manually operated generators. During hurricane season, Nguyen says that the sisters "trust in (God's) divine providence."

The Dominican Sisters of Mary Immaculate Province also prepare to serve after hurricanes by opening their buildings as shelters, visiting affected families or helping distribute food.

While sisters in Texas and Louisiana have not yet had to deal with a hurricane this season, Catholic sisters throughout the Caribbean and Florida recently prepared their buildings to withstand wind and water, as well as essential supplies to sustain their congregations as Hurricanes Fiona and Ian battered the area. The Diocese of Venice, Florida, posted a video of two Servants of the Lord & the Virgin of Matará holding plywood over a window while it was secured at St. Michael Parish in Wauchula, Florida. 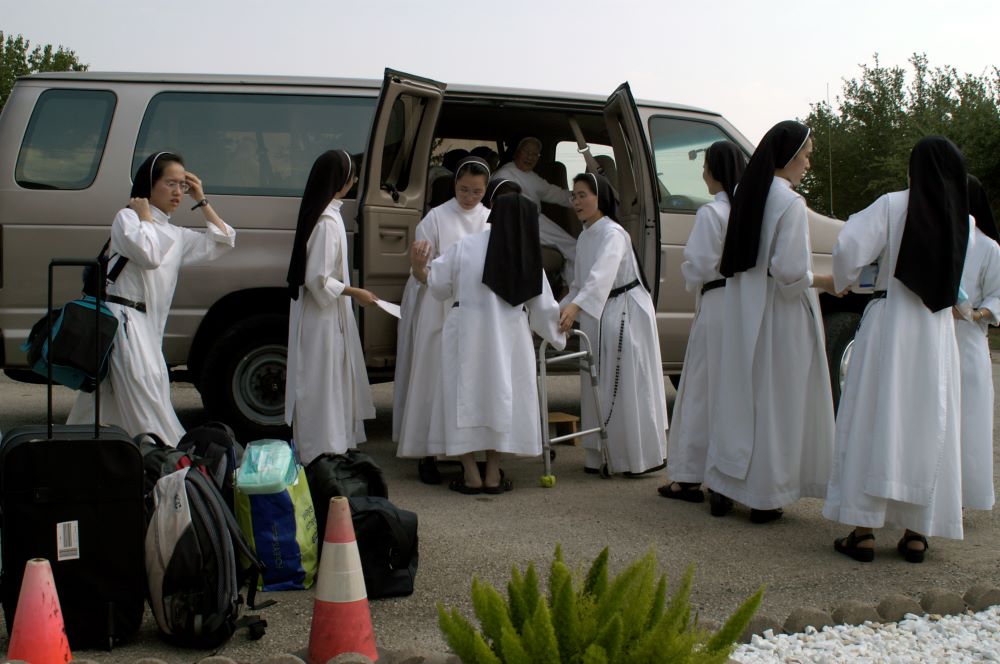 In Puerto Rico, Sor. Arelis Marmolejos, who had just moved to mountainous Aibonito from the Dominican Republic five months before Hurricane Fiona, worked with other Siervas de María in July to clear the outdoor patio of branches and debris that might lead to a power outage.

As Fiona approached, the sisters covered the windows and made sure they had sufficient water, food and diesel for the generator. "As women religious, we put ourselves in God's hands," said Marmolejos, who spoke about the importance of prayer.

After the hurricane hit Puerto Rico on Sept. 19, the Siervas de María were able to resume their ministry of caring for sick people the next day, even without water and power. "We continue with this process of prayer and closeness with the people who have been most affected," Marmolejos said. The convent had its power restored Sept. 24.

In Humacao, closer to the Puerto Rican coast, Sr. Vivian Maldonado said that the sisters in the Monasterio Santa Escolastica, part of the Monastic Congregation of Saint Benedict, have made improvements to the monastery that help with hurricane safety. They invested in stronger windows, a cistern for water reserves and a generator.

Before storms, the six sisters in Humaco make sure to have enough food and medications. Even with the generator, they lost power after Hurricane Fiona because they ran out of fuel for the generator, as much of the island battled extended power outages.

Sr. Judy Dohner, a Sister of the Humility of Mary who is serving in Immokalee, Florida, spoke with GSR on Sept. 27, the day before Hurricane Ian made landfall. As one of two sisters in Immokalee, she was planning to ride out the storm alone in her duplex. Her neighbor had agreed to help her operate the generator she had never had to use before if the electricity went out.

Hoping that the rotten tree in her backyard wouldn't fall on the house, Dohner knew she could stay with the other sister if worse came to worst. "It would be a great inconvenience to have my house fall down," she told GSR, but she also reflected that "we are so blessed with alternatives that people who are poor just don't have."

As she filled buckets of water to prepare for a potential water outage, Dohner thought about the Haitian families that she works with as a volunteer for Catholic Charities. Many families live together in small accommodations and rely on outdoor space for seating and storage, which would make it difficult to follow recommendations to secure outdoor belongings to prevent damage. She also worried that safety information was largely being distributed in English and Spanish and not in Haitian Creole.

After the storm, Dohner told GSR in an email that, while the hurricane was a "frightening experience," she was relieved that the worst effect of the storm was a two-day power outage and that the trailers in Immokalee had stayed intact.

Even after the recovery and rebuilding, the scars of dealing with such storms can last in other ways. Costa urged congregations to stay vigilant about the mental health impacts people suffer from facing hurricanes. "Some of the mental health issues may come up as more prevalent as people get hit continually," she said.