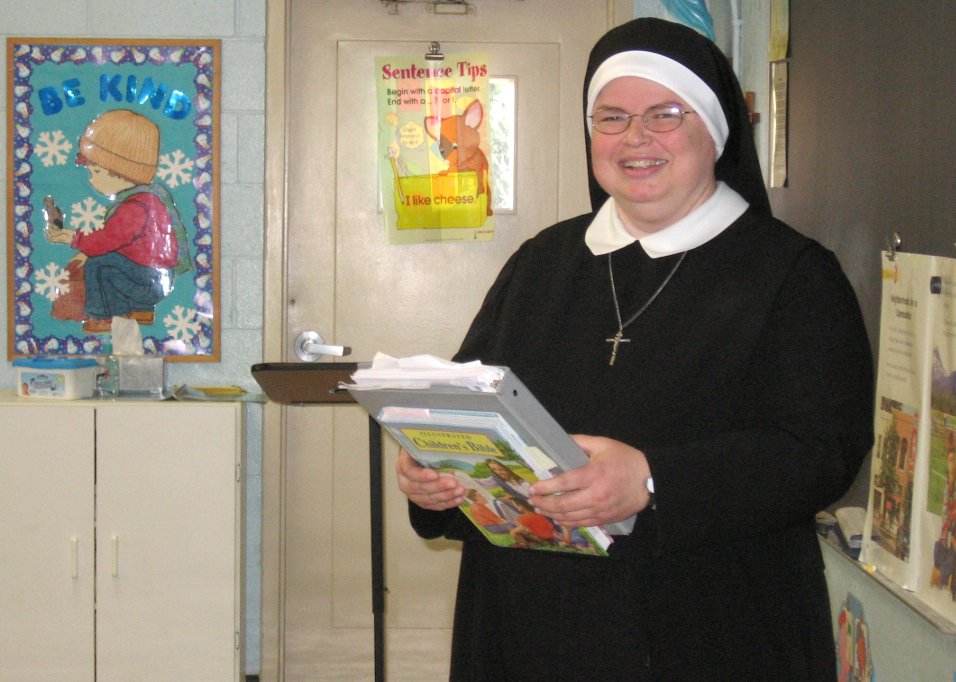 Sr. Mary Catherine Korte prepares to teach a class at St. Joseph Academy in Walton, Kentucky, in this undated photo. (CNS/Courtesy of the Sisters of St. Joseph the Worker)

A small Catholic school run by the Sisters of St. Joseph the Worker in Walton, Kentucky, is thriving, despite the small student body and the small number of sisters who run the school.

Walton — population 4,343 — is in the Covington Diocese, about 25 miles south of Cincinnati across the Ohio River in northern Kentucky.

The congregation with its seven sisters operates St. Joseph Academy, which addresses a wide range of educational and child development needs for students in grades 3 through 8. It has 38 students enrolled this school year.

"In addition to our grade school, there are 13 students in our home-schooling support program, which operates two days a week for our students in grades 3 through 8," said Sr. Patricia Jean Cushing, the principal.

"We strive to offer families a faith-based, Catholic education and academic excellence for all," she told Catholic News Service.

The Sisters of St. Joseph the Worker arrived in northern Kentucky on Nov. 1, 1974, with the establishment of the congregation's motherhouse.

Initially, the sisters organized a summer Bible school program for the children of All Saints Parish, but then opportunity came knocking.

"Our order was asked [in 1976] to reopen the All Saints Catholic School — which had closed in 1966 — and we did so, assuming financial responsibility as well," Cushing said.

St. Joseph Academy is owned and operated by the sisters, with its buildings leased from All Saints Catholic Parish. 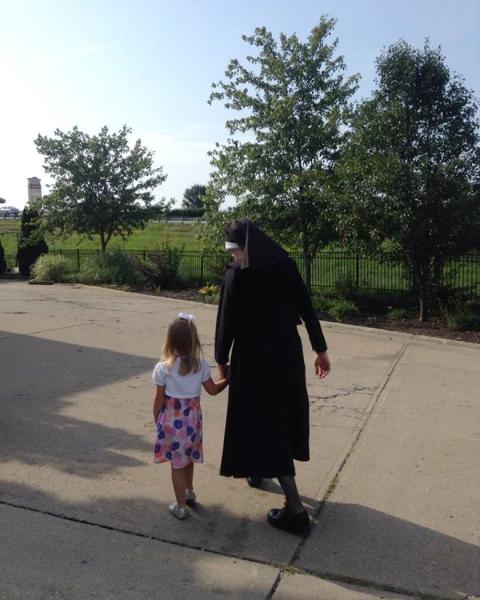 Sr. Therese Marie Schreck walks with a preschool student at St. Joseph Academy in Walton, Kentucky, in this undated photo. (CNS/Courtesy of the Sisters of St. Joseph the Worker)

The sisters expect to add a freshman class for the 2023-2024 school year and a 10th-grade class the following year and so on, until they have a complete high school core program.

"I have had high school principals from around the area tell me that they know who the [St. Joseph] students are because they know how to study," Cushing said.

St. Joseph Academy serves Catholic and non-Catholic students alike. "All families are welcome in the school and our other programs," the principal said.

"We do have — and offer — tuition assistance, up to a $1,000 a child, but families have to fill out the necessary paperwork, and we don't turn anybody down," she said.

Cushing also noted the school uses the FACTS management program, which "provides tuition assistance to families desiring a Catholic education for their children, but also determines what their need is, provided that the family meets the established criteria."

Mother Mary Christina Murray, who is superior general of the congregation and also teaches music at the school, praised its affordability for families.

"I think it is affordable compared to other Catholic schools [in the area], and based on what I know about them, we are a little bit lower," Murray said.

Tuition, Murray said, "is charged according to the number of children from a family enrolled in our school, and we try to make it affordable for large families as well."

According to the school's website, tuition and fees for a parish family with one child enrolled total $5,405. For parish families with three or more children enrolled, the total is $10,550. The amount is slightly higher for non-parish families. The school has much lower rates for its preschool and its home-school program.

She added that Fr. Matt Cushing, who is All Saints' pastor and Sister Patricia's younger sibling, "helps us avoid turning anybody away."

Beth Kahmann, an alumna of the school, has taught first and second grade there for 15 years. She has master's degree in teaching, a degree in special education and her certification in regular education for kindergarten through grade 5.

"All four of my children have gone through St. Joseph's and I have one left who is currently attending Holy Cross High School in a neighboring community," Kahmann said.

Asked about the appeal of working at the school, Kahmann's answer was simple.

"I really like the atmosphere here. It is a small school that works really well for us," she said, adding that all the students know one another, whether they are in the lower grades or the higher ones.

"Another plus is that everyone who works here knows everyone else," Kahmann said. "The parents all know each other, what's going on at school, and overall, it is just nice." 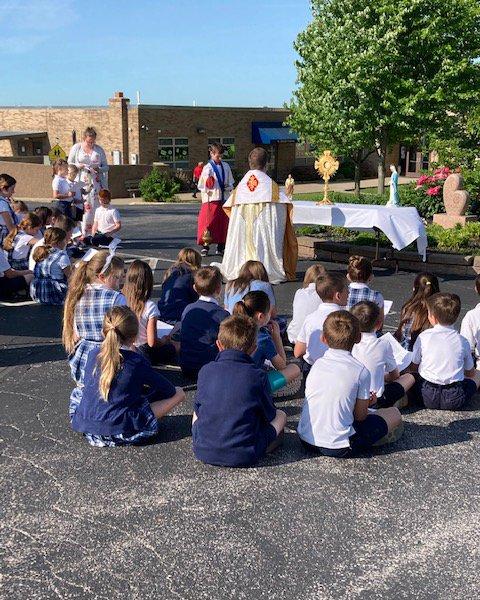 Students participate in eucharistic adoration at St. Joseph Academy in Walton, Kentucky, on May 13. (CNS/Courtesy of the Sisters of St. Joseph the Worker)

The educator also praised the sisters for providing the students with a solid religious education.

"Where most other Catholic schools go to Mass once a week — and [some] Catholic high schools only monthly — our students attend Mass every day," she said. "We have adoration once a month and confessions [for those old enough to participate]."

"We incorporate the Catholic faith into education all day long, and I'm very proud of being a teacher here and I will be here until they kick me out," Kahmann said.

Greg Gilstrap has taught at St. Joseph Academy for 19 years; he actually returned to the campus recently after leaving for two years to teach elsewhere.

"I wear many hats. Physical education is my primary job, but I also teach Virtus for both the school and the church, and I cook lunch for the school two days a week as well," he said.

Virtus is a child protection training program from the National Catholic Risk Retention Group. It gives clergy, religious and lay staff and volunteers the tools to recognize and report any form of child abuse or inappropriate behavior and misconduct.

Gilstrap teaches six gym classes on Mondays, combining various grades throughout the day. He also teaches preschool on Tuesdays, handles recess monitor duties two days per week and sits at the front desk as the receptionist when needed.

Gilstrap could make more money teaching elsewhere — like in Mason, Ohio, where he lives — but he's staying put.

"I enjoy working with the kids and watching them grow, year after year, because I teach all the grades," he said.