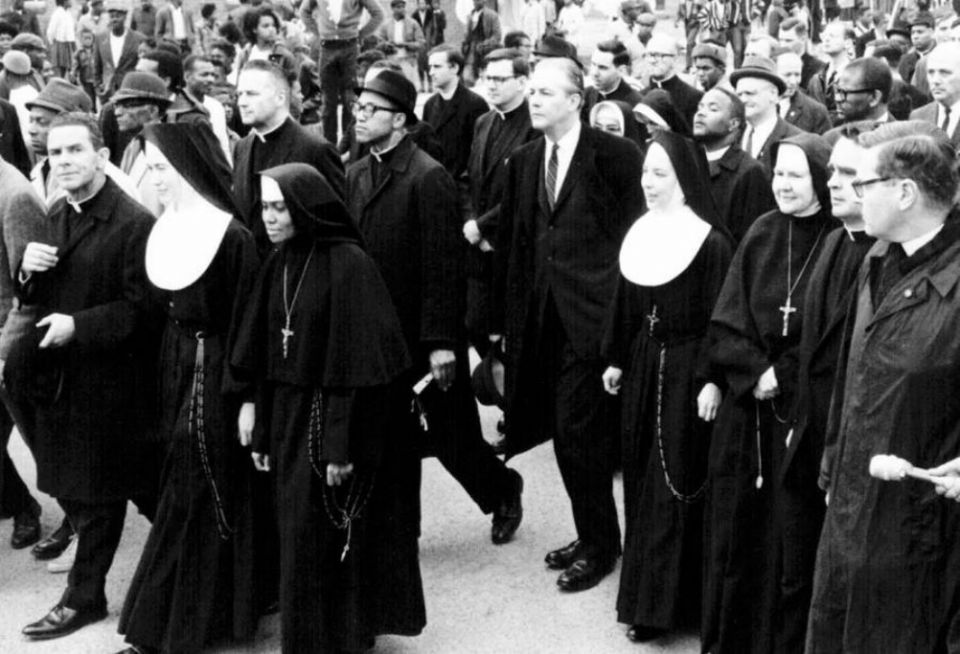 St. Joseph Sr. Rosemary Flanigan, fourth from right, takes part in the 1965 march from Selma to Montgomery, Alabama. (Courtesy of the Center for Practical Bioethics)

I was honored when Global Sisters Report asked me to write the Q&As for the Sisters of Selma Q&A series. As a historian, I have been researching, teaching and writing about Catholic sisters for three decades. As a consultant on the 2007 PBS film "Sisters of Selma: Bearing Witness for Change," produced by independent filmmaker Jayasri Majumdar Hart, I understood the pivotal role American Catholic sisters played in that momentous event in the civil rights movement of the 1960s.

Although Catholic sisters were among thousands of marchers, their presence was a landmark occurrence, an event that would reverberate around the country. Never before had Catholic sisters been involved in a national public protest, let alone one covered by all the national media.

Join 'Witness & Grace: A Conversation with Sisters of Selma,' on Nov. 17

Please join Global Sisters Report on 3 p.m. Eastern time on Tuesday, Nov. 17, for "Witness & Grace: A Conversation with Sisters of Selma" with professor emerita Carol Coburn, who conducted our Q&A series, and two women who participated on the march to Selma, Alabama, in 1965: Mercy Sr. Patricia McCann and Therese Stawowy, a former Sister of Loretto. They will share their experiences in this part of the civil rights movement in the 1960s, how it influenced their lives and ministries, and their insights on the parallels to and differences from the ongoing struggle to counter structural racism today. Click here to register.

By the final march from Selma to Montgomery, completed March 25, 1965, approximately 50 sisters representing 12 religious orders had gone to Selma. The majority of the sisters who traveled to Selma came from the Midwest, with the largest groups coming from Chicago; Kansas City, Missouri; and St. Louis. (It is impossible to know the exact number of sisters who marched in Selma and the congregations they represented. Surviving records are sketchy and inconsistent, with sisters' names omitted or recorded without surnames. These numbers are based on the best available data.)

Although many of the sisters who journeyed to Alabama have died in the ensuing years, I believe the GSR interviewees provide a powerful documentation of motives, ideals, experiences and reflections 55 years later. These eight sisters or former sisters had their own stories, and each lived their lives after Selma in a nation that has yet to reckon with its racist past and to fully embrace the true meaning of human dignity and equality for all.

As I reflect on what the interviewees told me, I am struck by some commonalities that sisters shared about themselves and their experiences. As with many powerful moments in our lives, we experience the event in real-time, and only later do we stop to reflect on the meaning of our actions. 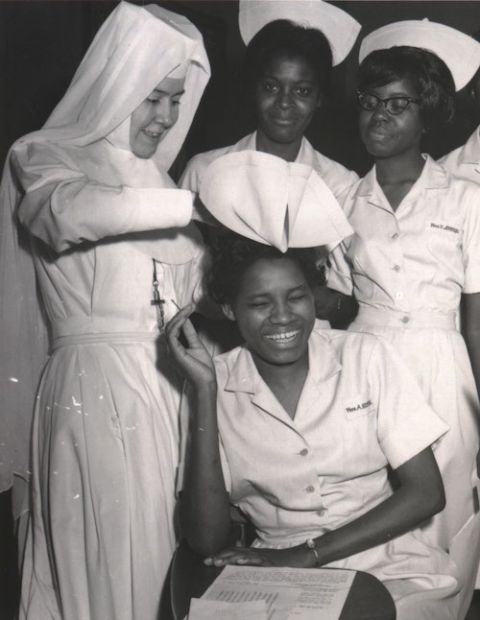 St. Joseph Sr. Barbara Lum, left, at a February 1965 capping ceremony in Selma, Alabama. (Courtesy of the Sisters of St. Joseph of Rochester)

The Selma interviewees said two things consistently. First, sisters did not realize the significance of what they were doing at the time, but in hindsight, they called it one of the most powerful, if not the most singular, experience of their lives. Second, sisters identify their activism at Selma as a catalyst that propelled them further into social justice causes throughout their lives, including participation in anti-war movements, racial/ethnic justice, women's rights, health care equity, and economic and environmental justice, among many other issues.

Other factors also impacted the interviewees' Selma experience. All the women talked about the importance of understanding and utilizing nonviolence and nonviolent practices in the Selma marches. They received on-site training from young Black activists who gave them strategies for peaceful engagement and confidence in what they were doing and why. It meshed well with the self-discipline and philosophical training they received in religious life.

At the time of their travel to Selma, most sisters were either attending universities or recently had received graduate degrees in their fields. They were women religious first, but also scholars and teachers immersed in a life of study, reflection and real-world experiences. Importantly, some powerful and life-changing experiences came from their direct work with minorities and people experiencing poverty.

Social justice and racial equality were not just theoretical concepts; they were real for many sisters who already were working in poor, Black neighborhoods and striving to support their "neighbors" with food assistance, health care, housing, job training and education. Additionally, documents from the Second Vatican Council gave them the spiritual and theological substance and sustenance to become activists as women religious in the world. They were early examples of the model of the sister-scholar-activist nun in the post-Vatican II era.

Sisters would never be found on the sidelines of social justice activism again. They moved center stage.

I have often written about Selma as a watershed moment for American Catholic sisters and their religious congregations. As Sr. Margaret Traxler wrote for Catholic Extension's magazine in June 1965: "When I washed the mud of Selma streets off my religious habit, I felt that I was touching holy ground. This mud had been gathered amid a profane society where I had learned a lesson in Christian love. ... Selma is a point of no return."

She was right. Sisters would never be found on the sidelines of social justice activism again. They moved center stage. Combined with the end of Vatican II and the cultural tensions, challenges and transitions of the 1960s, Selma thrust sisters into a new world spiritually, theologically and socially. Selma signaled the beginning of what were often painful but necessary and powerful transformations.

Likewise, in 2020, the national unrest fueled by the COVID-19 pandemic, racial injustice and immigration policies, among other culturally divisive issues, has set the stage for another crisis of conscience. Sisters, like many Americans, find themselves at another crossroads. Who are we? What are our values? How do we move forward peacefully as one nation in a climate of anger, suspicion, hostility and moral ambiguity? Similar to the 1960s, these questions are not easily answered in 2020.

However, the sisters have given us a road map, a playbook that goes beyond age, gender, race, religion and political affiliation. Fifty-five years after Selma, many laypeople, Catholic and non-Catholic, have joined sisters in their work for social justice, providing a model of collaboration and cooperation for negotiating the difficult road ahead.

As a laywoman, here is what I realized by watching, studying and learning from sisters: Find and create meaning and passion in your life and work. Constantly redefine yourself to meet the moment, to engage in the possible. Learning, studying and reflecting are lifetime endeavors and should never end. Age is not the determining factor for taking action and improving our world.

So, what is retirement, really? The word needs a new definition based on the sisters' model of lifetime compassion and service. Work with others for a common cause and realize that working toward the "greater good" is more than a cliché or a slogan on a bumper sticker. In a world searching for meaning and purpose, Catholic sisters provide a model for engagement and being present — a way forward in troubled times.

Social Justice | The road to justice runs through Selma: reflections on the Sisters of Selma Q&A series

How would you feel? Lessons in empathy from a 5-year-old