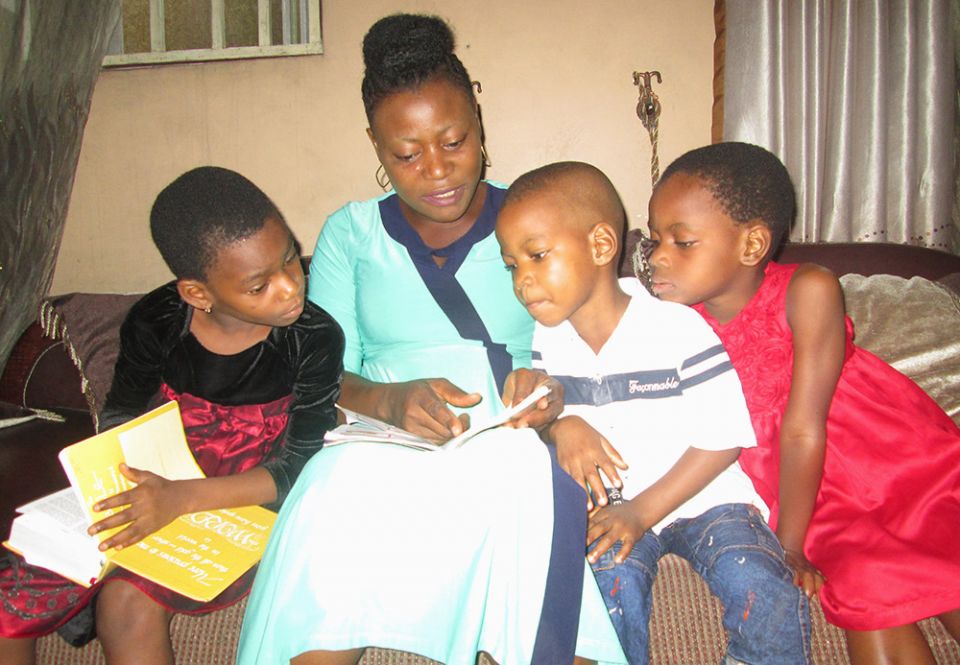 A mother and children in Nigeria: Through their privileged position in child upbringing, women have the power to contribute to eradicating victimization and injustice against themselves. (Caroline Mbonu)

I had the privilege of participating in this year's annual World Union of Catholic Women's Organizations (WUCWO) Day celebration on Oct. 13 at the Corpus et Sanguis Christi Cathedral, Port Harcourt, Nigeria. The president of the parish Catholic Women's Organization asked me to share with the women of there the WUCWO celebration theme, "Let us eliminate discrimination and violence against women."

Founded 110 years ago, in 1910, WUCWO now represents nearly 60 Catholic women's organizations worldwide and is active in around 60 countries, representing around 8 million Catholic women. The size and diversity of membership provides enough space from which to discern and fight the various kinds of injustice against women.

Rather than bemoaning obvious problematic gender-based violence and discrimination, I took the long view in my presentation by exploring women's vantage point at the grassroots, the household. What informs the long view approach is the privileged position of women in child upbringing.

Addressing violence against women from the cradle would go a long way to reset the chauvinist mindset acquired from a tender age. Because gender sensitivity may not be consciously promoted during the first few years of a child's life, women in some way are implicated — inadvertently — in their own discrimination.

If we must work against structures and cultural texts that dehumanize women, we must rethink the various methods of child rearing, and include a gender-based child upbringing. In other words, women have the power to contribute to eradicating victimization and injustice against themselves.

Thinking about this, I employed the Gospel of Luke 11:27 as a guide: "Blessed is the womb that bore you and the breast that nursed you!" 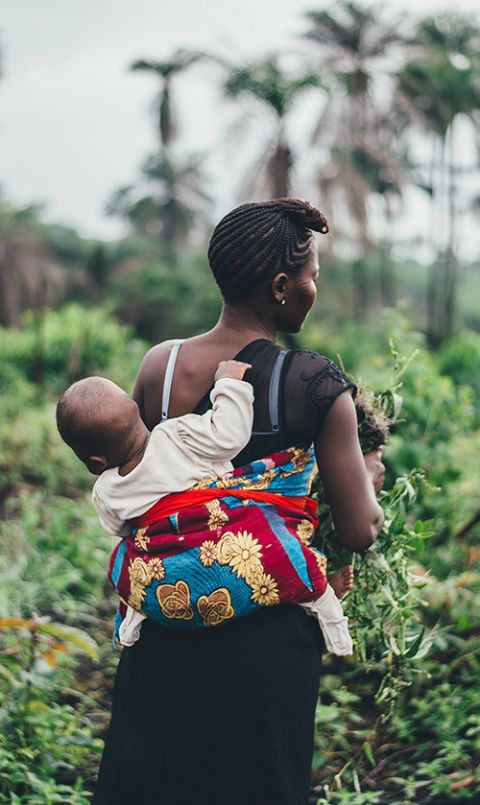 The context of this passage is during one of Jesus' public preaching episodes, where according to the evangelist, an unnamed woman in the crowd raised her voice, blessing Jesus' mother; the expression "the womb that bore you and breast that nursed you" is another way of showering praise on his upbringing. Such warm expressions about mothers are not uncommon among African people.

Among the Nigerian Igbo, for example, a well-mannered child is said to have had an abundance of breast milk (o nujuru mmiri-ara afo). The idea is that blessing a mother validates the decency of the child and confirms a proper upbringing. This is a recognition of the "feminine genius," which brought forth a sensitive individual, fully alive to his environment and the needs of the people around him.

The outburst of the unnamed woman — who could be anyone — draws attention to two significant points. First, the earthy quality of motherhood, and second, child upbringing. Of course, motherhood goes beyond having biological offspring. Every woman bears within her the seed of motherhood — a seed that sprouts, blossoms and fruits in different ways. Motherhood is a call to self-giving and sacrificial love.

We remember that the Blessed Mother was chosen as a model of Catholic motherhood, a woman of whom Dante Alighieri wrote: "Mercy, might, compassion / Grace thy womanhood." To eliminate the prejudices against women, therefore, challenges us all to take a journey inward to rediscover the feminine genius within and work hard to reawaken it. From within is the domain of the womb and the source of breast milk that nourishes a child's love.

We cannot deny that persons involved in the discrimination and violence against women are also products of women's tendering and nurturing. And if it is true that women actually beget their own oppressors, they can surely redesign the grassroots of the system that produced such undesirable behavior in children.

Women can change those processes that tend to instill oppressive tendencies in a child, male or female. William Ross Wallace's 1865 poem "The Hand that Rocks the Cradle Is the Hand That Rules the World" captures the unique power for change exclusive to women, the possessors of the cradle. Undoubtedly, Wallace points to the feminine genius as an instrument of construction of a more humane world, with child upbringing as the building block. Where that fails, the ills of unredeemed patriarchy would continue to hold sway.

Furthermore, other considerations of child upbringing demand attention for the benefit of humankind. Humankind continues to make positive advances in science and technology, as well as in other fields of human endeavor. Numerous developments enable us to create new ways to make certain tasks easier, and to correct errors in others.

Assignment of household chores, choice of careers, and even marriage can be degendered. Even apparently harmless acts like name designation in families that have mostly female children convey a profound sense of discrimination and violence.

In many instances among the Igbo, for example, one can discern the feelings of a family in the names of their daughters, particularly when they have them four, five or six successively. Such names as Ehwenkechinyere — loosely translated, "We cannot but accept that which God gives" — is not uncommon. Ehwenkechinyere (Nkechi for short) is suggestive of a deep sense of loss — loss of a male child. And women acquiesce to these incongruities. Sadly, the reverse is not the case: There is never one male child too many!

Male-child preference creates its own form of discrimination and violence. Here a basic knowledge of human biology would be helpful — particularly of the X and Y sex chromosomes and how their combination determines a person's sex. The understanding can be liberating, especially for women, but for men as well.

Our baptism makes us sharers in the mission of Jesus Christ, and as such, we are evangelizers since childhood. The ongoing pandemic and the shelter-in-place policy amplify this mission. In staying together at home during this period, women's role as grassroots evangelizer becomes more prominent in the ways they can reinforce our faith tradition through family prayer, praise and worship.

Our participation and co-responsibility as Catholic women enable us to fulfil this mission of Christ and help bring about human development. But to succeed we must reach deep down and summon our God-given talents that would enable us to raise children for the reign of God. Caroline Mbonu is a member of the Congregation of the Handmaids of the Holy Child Jesus. She is currently a senior lecturer in the Department of Religious and Cultural Studies at University of Port Harcourt, Nigeria. An interdisciplinary scholar, she employs Scripture, African religious traditions and economics to seek insights into improving women’s participation in social processes.

Q & A with Sr. Vivien Okereke

A new perspective, an evolving consciousness