Justice must prevail in Myanmar! 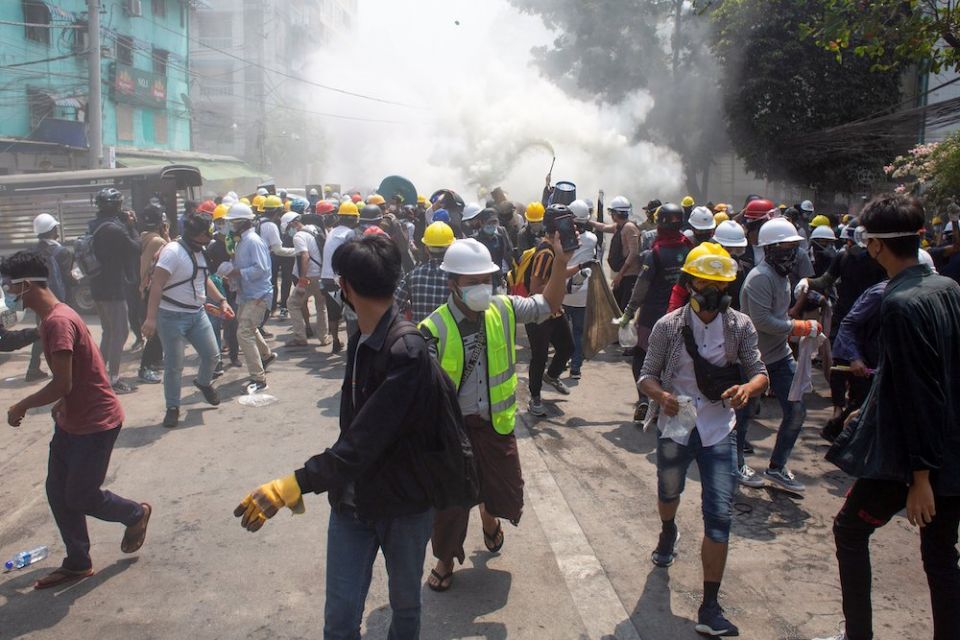 Protesters retreat after police opened fire to disperse an anti-coup protest in Mandalay, Myanmar, March 3, 2021. Pope Francis appealed for an end to deadly violence against protesters in Myanmar, calling on the military junta to free political prisoners and let dialogue and the journey toward democracy prevail. (CNS/Reuters)

On Feb. 1, 2021, I woke up at my usual 6 a.m. time and checked the news on Facebook, which I usually never do. The cool spring breeze in Yangon, Myanmar, was waking me up, but I was still half asleep. Suddenly my heart was beating loud, my eyes were searching for an accurate news source, my mind was working hard, repeating, "This is not true!"

But at 9 a.m., the illegal military coup was confirmed by Myanmar national TV channels — MRTV station at Naypyitaw and MWD station at Yangon — the channels used for official broadcasts. The military of Myanmar had seized power from the democratically elected government, using the excuse that there had been election fraud in November 2020. The president, Country Chancellor Daw Aung San Suu Kyi, and many other elected officials were arrested at dawn — even peace activist singers and song writers were arrested.

I could not believe the news and tried to reach friends to confirm what was going on. However, all communication, including internet, had been cut off. I could not call anyone until 1 p.m.

Even though religious people — Buddhist monks, nuns, Catholic bishops, priests or sisters were not allowed to vote — I personally cannot accept the coup because I respect the result of the peoples' vote. The winning government is the people's government, not the military.

Something similar had happened in 1962, on March 2. General Ne Win took over government power, and on that day all missionaries were chased away from the country. In the beginning, he claimed that he would practice socialism, but instead he enforced military rule over the country. For 26 years, the people of Myanmar were isolated from the rest of the world. My grandparents lived under these strict restrictions and suffered from the oppression.

In1988, the National League of Democracy was elected as the winning party, but again all these new leaders and supporters were arrested. Thousands of them were brutally killed. This mass killing of civilians forced the people to once again accept the military dictatorship for 23 more years.

Then, from 2011 to 2016, a civilian government was again introduced, but the leaders were from the military party. They had just taken off their uniforms. It has been and still is a long difficult journey to win back a peaceful country and freedom from oppression.

The 2016 November election was our only hope. Lady Daw Aung San Suu Kyi, our legally elected leader, was released from house arrest. She was allowed to lead a democratic party in the election. There is no doubt that the National League of Democracy Party won the election in all 14 regions and states. In the 2020 November election, her party won — a civilian chosen government — but it was snatched away.

For me, this military coup on Feb. 1, 2021, is like a bad dream. I still do not want to believe it is true. But this time I am not afraid to raise my voice and join with the people protesting on the street in a peaceful rally. The people do not have any weapons and neither do I. But we do have power. We have hope and we have a goal — to reach toward freedom, peace and justice. I am very sure that "we will win the fight this time." We don't want to return to the situation of 30 years ago — being kept behind a wall, separated from the world. 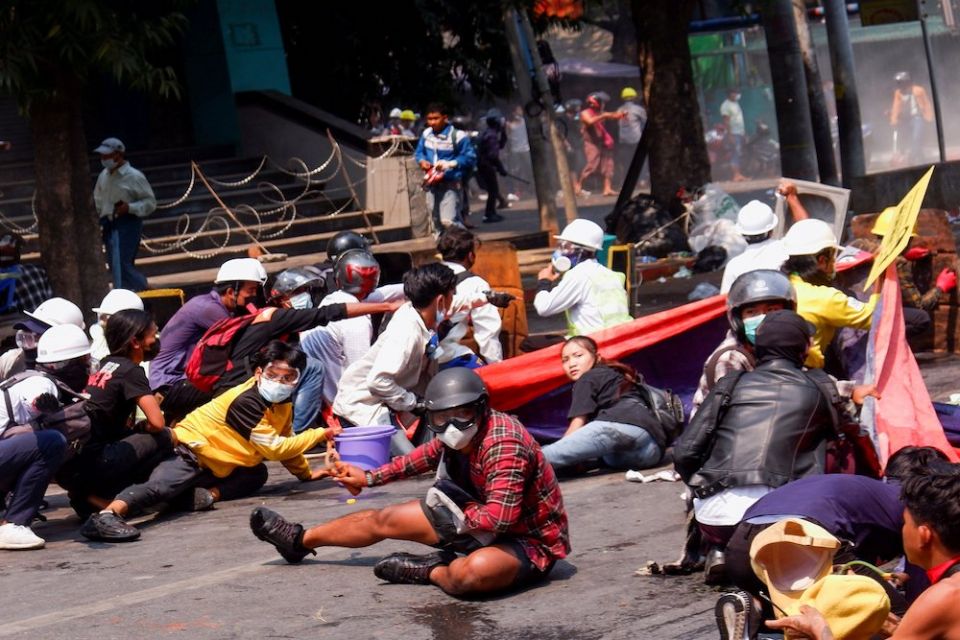 It has been well over a month that we have been protesting and demanding the return of our country leader and president, as well as all of the elected government members and many detained civilians kidnapped by this military. The military continues to kill innocent people day and night, shooting young people as if in a battle or war zone.

I have seen the peaceful protests on the streets. We, religious of several congregations, join with the people every day, distributing water, drinks and candy for the protesters who have been passing by our house, from Feb. 7 to 28, 9 a.m. to 4 p.m.

We have also joined inter-religious groups in Mandalay, Yangon, Bago, Kayah state and Kachin state in prayers for peace for our country. We have marched with Catholic groups, saying the rosary in the street and praying in front of the embassies (Russia, China, Indonesia, France, Egypt). Sisters and our lay mission partners have been volunteering for day duty health rescue services since Feb. 8.

So far, we are not being persecuted, though some religious figures have been arrested.

The day I was writing this — March 4 — was the second day in Yangon and Mandalay that the military air force was throwing tear gas and bombs into the crowds and nearby houses. Snipers shot protesters in the head and chest, and volunteer health workers were arrested and tortured for supporting the people. These tactics are not merely cracking down on protests, but they are deliberate killings — crimes against humanity. Throughout Myanmar, people are strongly condemning the killing and torture, calling for an end to all brutality. I long for a mighty power to make this all disappear.

Please support and help us. The military has enough statements and endorsements for itself. We seek proper action to seize this military group.

Sometimes, I imagine to myself that I have a mighty power. I will make them disappear with all of their supporters from the Earth. 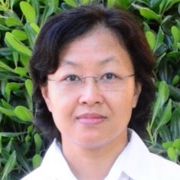 Sr. Jane Nway Nway Ei is a Good Shepherd sister in Myanmar. Her academic background is in psychology, religious studies and the safeguarding of minors. She has served as a local leader and in Good Shepherd ministries empowering women and girls — especially those who are trafficked and exploited — and has worked with the Catholic Episcopal Commission for tourism and migration, facilitating workshops on anti-human trafficking and safe migration. Presently she in Yangon, ministering in mission development and child safeguarding.

Maryknoll sister persists in call for preferential treatment of the poor

Religious sisters in Myanmar stand up to military junta

Sisters in India discuss how attacks, rapes are affecting their ministry