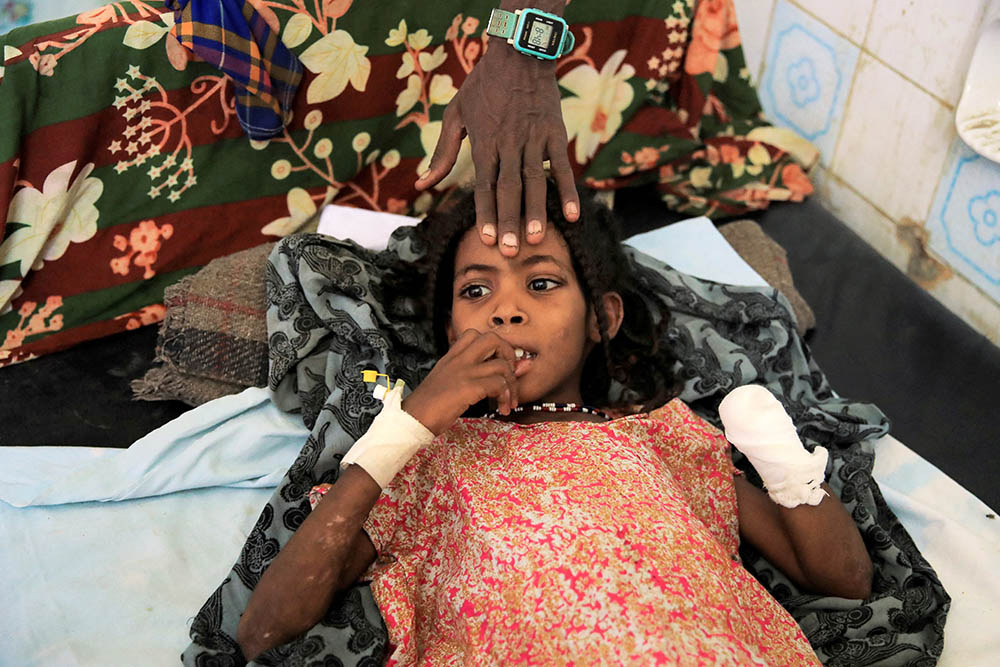 An 8-year-old girl receives treatment at Ethiopia's Dubti Referral Hospital Feb. 24. The girl lost her left hand from explosives left near her house in the aftermath of fighting between the Ethiopian National Defense Force and the Tigray People's Liberation Front. (CNS/Reuters/Tiksa Negeri)

I began my work there in 2019, but our missionary team fled during the civil war, and I left the region on Jan. 10, 2022. As of April 8, our sisters were able to go back to their missions, but I have not gone back yet. These are memories I have of my own experiences there.

Tension between the Tigray region and the federal government of Ethiopia had been ongoing for some time, with the Tigray People's Liberation Front party (TPLF) resisting Prime Minister Abiy Ahmed's attempts to take away regional power to unite the country under a stronger centralized government.

The TPLF were especially unhappy over the postponement of the October 2020 elections due to the COVID-19 pandemic, and defied Ahmed's directive and held the scheduled regional elections. This action began the civil war in the Tigray region in November 2020, which has killed thousands of people and internally displaced millions.

The declaration of a cease fire between the Ethiopia federal government and the Tigray forces in 2021 brought joy and happiness to me and my community sisters. Relieved and overjoyed, we thanked God and celebrated as the Eritrean military began leaving the district.

But then our hopes evaporated — the cease fire was a mirage. Our region had no electricity, food or network service, and people's movements were restricted. Banks had no cash, and foreign aid stopped coming.

I don't understand: What were the crimes of the civilians in the Tigray region — especially mothers and children? I am still really disturbed — I feel helpless, confused, stressed, and do not know what to do.

It is difficult to know what was going on in the region; it was rumored that the federal military ran away, pushing the prime minister to call for a cease fire, which the Tigray People's Liberation Front rejected, unless certain conditions were met. The TPLF demanded that all the social and basic services that were taken away from the region must be reinstalled and the things stolen should be returned. But the federal government refused, and the cease fire failed.

Instead, the government imposed stiffer punishments onto the region. Nobody could leave, and airplane arrivals stopped. Everything came to a virtual standstill. We were at the mercy of God and providence.

As a foreigner in the war area, I found everything so confusing. How can civilians be punished in such a cruel way by their own people? The federal government and the TPLF were so drunk with power that they forgot the importance of human life, and were not interested in peace. 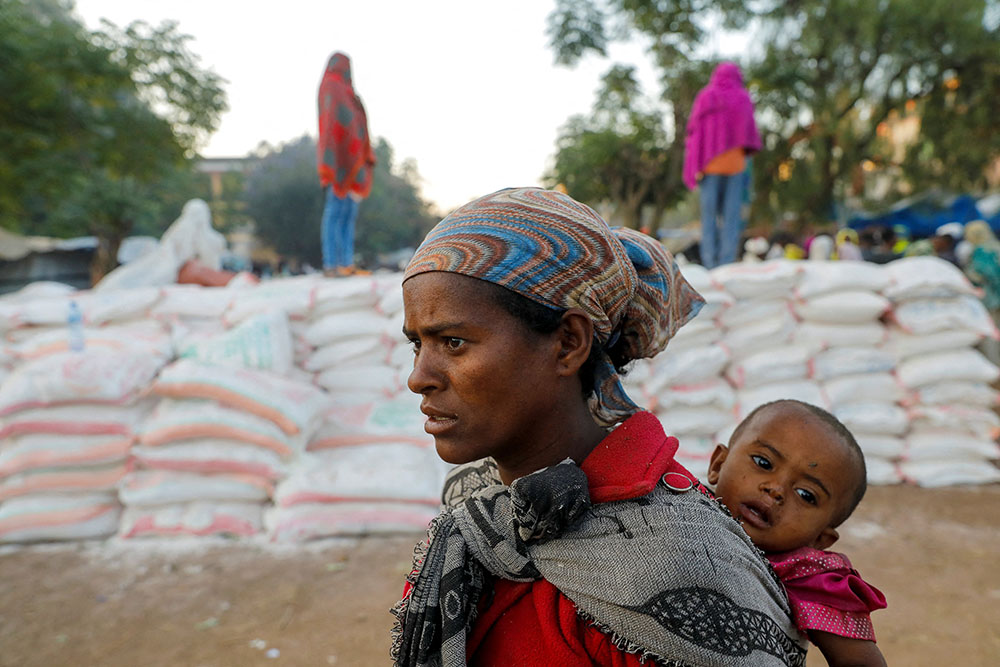 A woman carries an infant as she stands in line for food at the Tsehaye primary school, which was turned into a temporary shelter for people displaced by conflict, in the town of Shire, in Ethiopia's Tigray region, on March 15, 2021. (CNS/Reuters/Baz Ratner)

How were the people surviving? The children came to us to ask for food, but our community had none to share. Our funds in the bank were inaccessible. I was so sad and angry! The poor children were suffering.

I was grateful that some of the youth and children in the community were making good use of the situation. We helped with the children's catechism class, teaching them simple prayers and songs. And we taught English at their prayer meetings for at least 20 minutes a day to keep them occupied.

The lessons were going well, with great participation, but then many of the youth were forced to join the Tigray Defense Forces (TDF) — as they call the Tigray military now. We were left with few people, and were sad to see the teenagers forced to become part of the military in the region.

Some joined the military because of the lack of food and money — they were convinced that being in the Tigray military would guarantee them food, and give them a chance to get revenge on what the prime minister and his alliance have done to the people in the region.

Then the TPLF began compelling each family to give at least one person to join the Tigray Defense Forces — young women and men, even small boys and girls in junior high school. Parents whose children refused to join the defense force of the region are put in prison.

Almost all the young ones are gone from the church and our community. My heart is breaking for what is going on in Tigray, Ethiopia.

The Tigray Defense Forces hoped to fight their way to Addis Ababa, the capital city of Ethiopia, but I doubted if they could do it — the government has the whole federal military and all the military equipment. I was really afraid for the Tigray military and the youth who have little training. My fears heightened when the federal military started airstrikes in our regional capital, killing some civilians, including small children.

The tension in the region grew, as everybody was afraid to leave their homes for fear of bombs or airstrikes. Parents did not allow their children to go out, and bus service stopped due to lack of fuel. We were most afraid of the drones — you do not know when and where they will be coming. I always said my bedtime prayers knowing that a bomb could fall on me in my sleep. from the federal military.

But in spite of it all, the people still support the TPLF. They are convinced that the regional defense force will be able to overthrow the prime minister. They are waiting patiently for victory. Some of the people say that they are not Ethiopians but Tigrinyan. They believe they are now separated from Ethiopia due to what has been done to them. 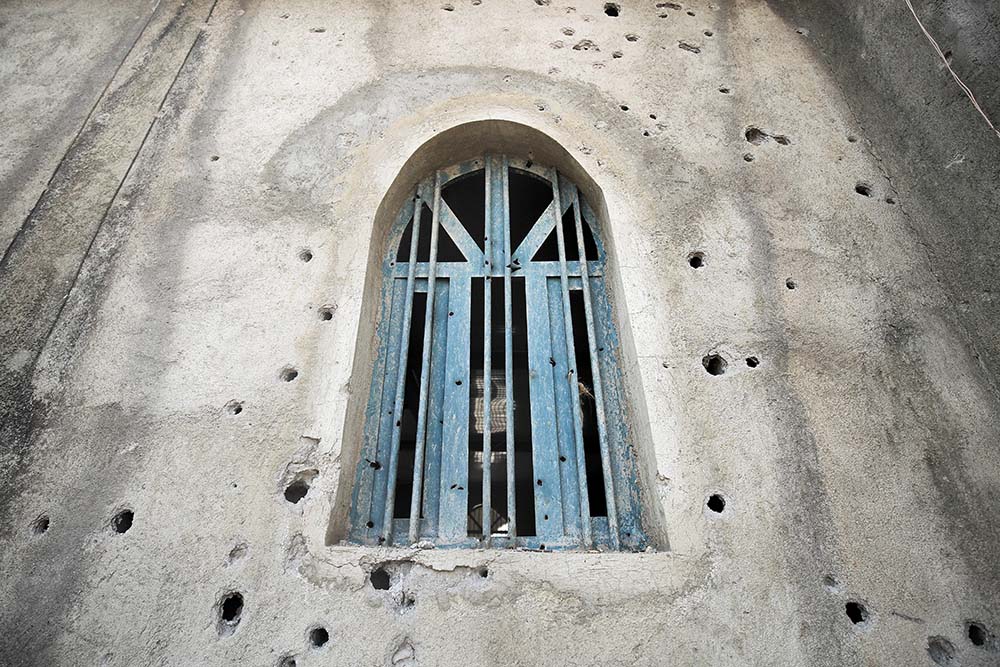 Bullet holes are seen on a mosque in Kasagita, Ethiopia, Feb. 25. The damage came from fighting between the Ethiopian National Defense Force and the Tigray People's Liberation Front. (CNS/Reuters/Tiksa Negeri)

The elementary school began in the midst of the war, and had stopped singing the national anthem of Ethiopia. Instead, they are using the Tigrayan anthem to show how seriously the region is ready to be separated from the Ethiopia as a country. I feel so sad that the people are in favor of war.

When is it going to end? The prime minister even expelled the personnel of international groups from the country because he feels they are supporting the TPLF. Hunger has taken over the region, and women and children are dying. What can we do now?

I had a little hope in 2020 when African Union envoys went to Addis Ababa, trying to push the TPLF and the prime minister to dialogue. In 2021 the Kenyan president was also asked by the U.N. to intercede. The U.S. secretary of state visited some African countries in 2021 and met with the Kenyan president about the situation in Ethiopia.

But the TPLF and the Ethiopian prime minister were adamant about their positions. Ahmed announced to the people on his Facebook page that he was going to the frontline to fight the "TPLF Rebels." The small window of hope for dialogue seems to have closed completely. But we continue to trust in God and hope that his will would be done.

The Russia and Ukraine war is known to the whole world through social media, while the Ethiopia and Tigray civil war is a hidden war, with all the atrocities. The people can't leave the country — is this an act of ethnic cleansing?

In late June, Ahmed said his government has formed a committee to negotiate with the northern Tigray region's forces. We can only hope and pray!