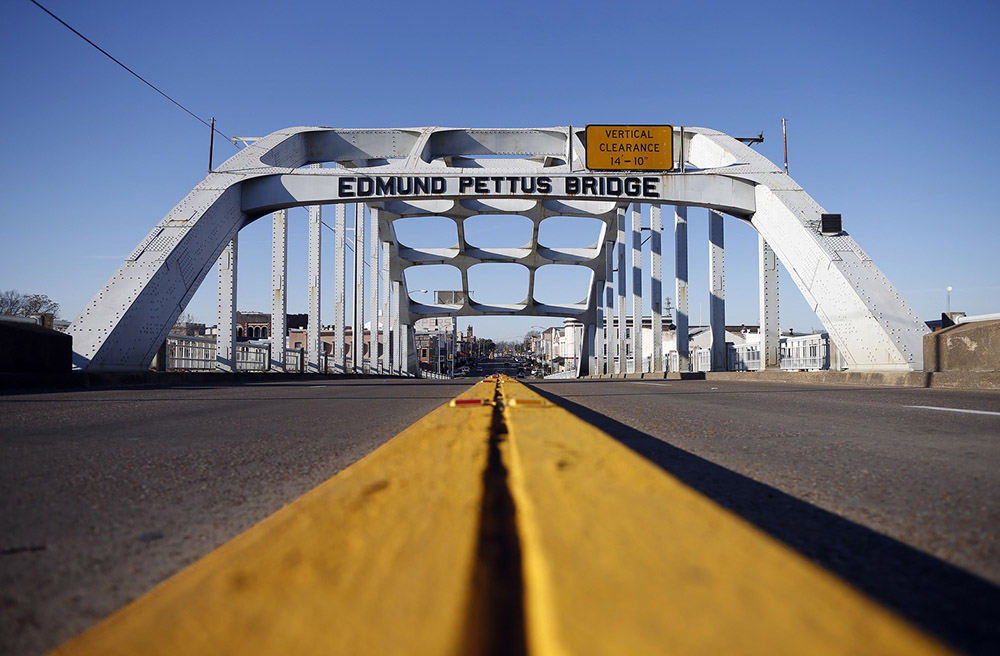 The Edmund Pettus Bridge is seen in Selma, Alabama, in 2015. (CNS/Reuters/Jim Young)

I morphed into Arbery's identity long before the court hearings and long before Feb. 23, 2020, when Ahmaud Marquez Arbery, a 25-year-old Black man, was murdered in Glynn County Georgia, while out jogging.

I wondered how many times I left a public setting and been called a derogatory name or perhaps, unknowingly, had crossed into unwelcoming territory, pursued by racist individuals. Do the times I have been followed by store clerks count? How about the piercing glances only I notice when I am the sole minority in a group of my white friends?

I was born and raised in what is now the fifth most populous city in North Carolina. Today, most Black Americans and Mexicans live on the east side of Winston-Salem — where I lived before going to college. Currently, I live on the west side of the city — preponderantly Caucasian — and minister at a predominantly white parish. One would say I have "crossed the tracks."

Prior to the early 1980s, one saw Black women only at bus stops, waiting to journey eastward from homes where they had worked for eight hours in mansions on Stratford, Buena Vista, Virginia and Country Club Roads, diligently cooking, cleaning, and caring for children not their own.

Winston-Salem, North Carolina, is a city where, for the most part, I have felt safe. I have been told, however, by Black and white newcomers, that at times they sense a strong snub of Southernism, the cliquish nature of the "Twin City," and the sour stench of racism. Keeping this in mind, I am wise not to become too comfortable, and to remain vigilant in certain surroundings.

My parents were born in the early part of the 20th century. Having lived through the Great Depression, cross burnings, race riots, the civil rights movement, the assassinations of Medgar Evers, President John F. Kennedy, Robert Kennedy, Gandhi, Malcolm X and Martin Luther King — who would have thought that they would have lived long enough to experience the rancid bite of racism from a 21st-century president of the United States of America?

I have asked to the point of exhaustion, "How much longer will North Americans tolerate the raw blistering infectious scarring of racism? How much longer will a government, seemingly not for all people, give birth to injustice, insanity and powerful forces that strip human dignity? How much longer will people of color have to experience the racism and rejection that is birthed by greed, selfishness, ignorance and narcissistic behavior?"

My questions remind me of King's "How long? Not long!" — a powerful speech at the end of the Selma to Montgomery, Alabama, march for the right to vote.

On March 25, 1965, King spoke to a crowd of approximately 25,000 people, many of them marchers who had seen or endured violent encounters with law enforcement officials and white supremacists, including the infamous "Bloody Sunday."

Bloody Sunday was the terrible event 18 days earlier when around 600 people attempted to walk across the Edmund Pettus Bridge in Selma, the first attempt to begin the walk to Montgomery. Unfortunately, state troopers violently attacked the peaceful demonstrators with dogs, fire hoses with powerful water force, and beatings with baseball bats and police batons to attempt to stop the march.

Some of the accounts of Bloody Sunday I have read about in books. However, I also had the pleasure of knowing the late Sr. Mary Antona Ebo, a Franciscan Sister of Mary, an educator and a civil rights activist who was born in 1924 in Bloomington, Illinois. As a young nun, Sister Antona walked across the Edmund Pettus Bridge with King and other protesters. I met her at a National Black Sisters' Conference in the late 1980s. 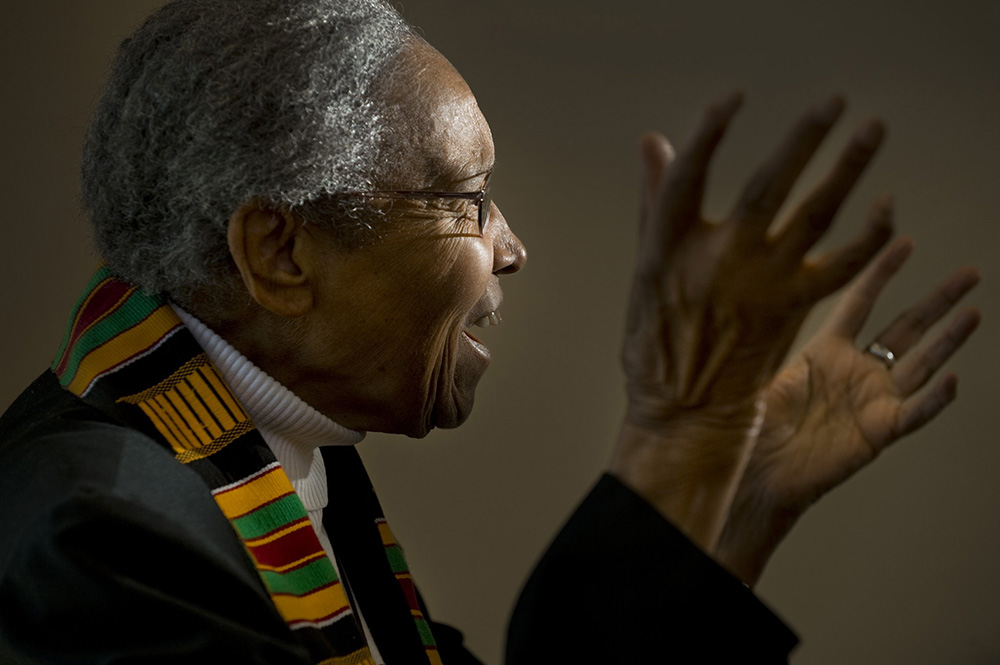 In 2014, I visited Sister Antona at her apartment in St. Louis. She spoke about Bloody Sunday with great emotion. As we looked at pictures she said, "The protesters who went ahead of us were brutally attacked and all we could do was watch in terror and silence."

In "How long? Not long!", King encouraged people to continue the struggle for justice. His desire for everyone to be treated with dignity seems irrelevant for humanity today. Irrelevant and inconsequential because it is talked about by people of color again and again. "We are not insignificant! We are children of God! We are no better than you; no less than you. We are human beings!"

I would like to reiterate part of King's speech.

I know you are asking today, "How long will it take?" Somebody's asking, "How long will prejudice blind the visions of men, darken their understanding, and drive bright-eyed wisdom from her sacred throne?" Somebody's asking, "When will wounded justice, lying prostrate on the streets of Selma and Birmingham and communities all over the South, be lifted from this dust of shame to reign supreme among the children of men?" ...

How long? Not long, because the arc of the moral universe is long, but it bends toward justice.

Those of us who live in daily racial uncertainty must believe that the arc of God's goodness will bend toward fairness, honesty, righteousness and integrity. We must be wrapped in God's grace as we move forward courageously, but cautiously; letting our voices rise with conviction, but courteously; acting with focused determination and assertiveness, but without agitation and aggression.

I have learned as a person of color that I cannot be passive and succeed. It is crucial to speak my truth with firmness in a way that can be heard and accepted. I have to think before speaking and do so in a way that is nonthreatening to a white person. It is also important that I carry myself with confidence, but not with arrogance.

In some demographics, when a person of color exhibits too much confidence, it can defeat their purpose. I recall walking into a room once and being confronted by an older sister, "What's with the air of confidence? You walked into the room like you own the place." A person of color does not always have to be on guard. However, gauging the when and where of the how-to-be and not-to-be is exhausting.

As I question, "How long must people of color deal with racism and rejection in North America; when will 'wounded justice' be resurrected?" I find these words from Dr. King's speech comforting: "How long? Not long! Because: Mine eyes have seen the glory of the coming of the Lord ... His truth is marching on."

Clips from Martin Luther King's "How long? Not long!" speech at the State Capitol in Montgomery, Alabama, March 25, 1965 (YouTube/incogito)