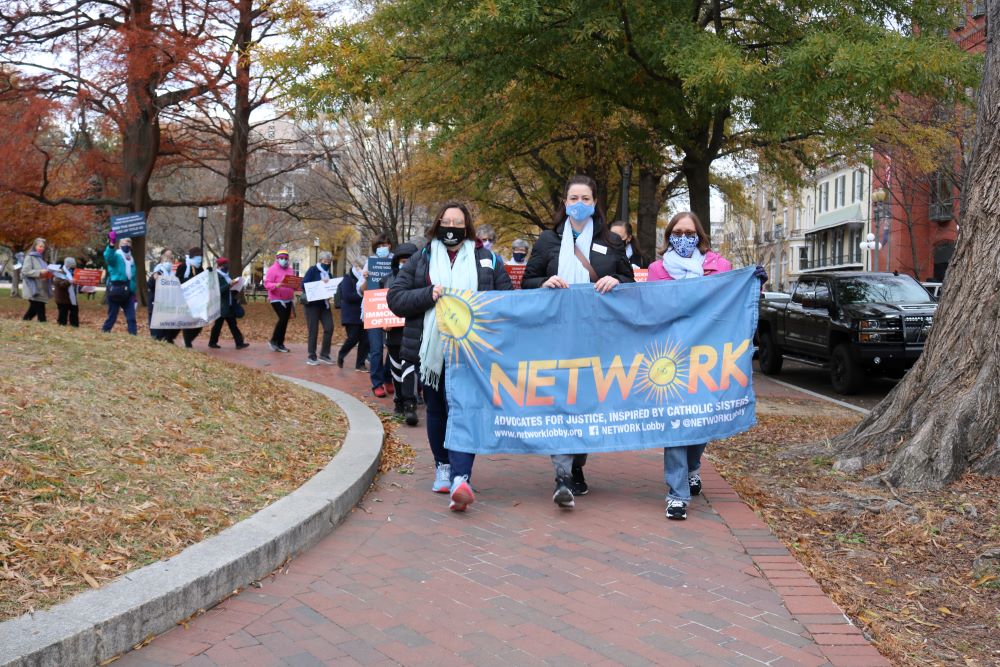 From left: Humility of Mary Sr. Eilis McCulloh, St. Joseph Sr. Erin McDonald, and Mercy Sr. Mara Rutten participate in a December 2021 demonstration at the White House that encouraged President Joe Biden to end Title 42, a measure enacted at the start of the coronavirus pandemic to keep asylum-seekers out of the United States. (Courtesy of Network Lobby for Catholic Social Justice)

More than 50 years ago, 47 sisters met at Trinity Washington University in Washington, D.C., to discuss how to make the United States a better place.

Women religious across the nation had embraced the Second Vatican Council's call for renewal and reform a decade earlier by joining the civil rights and women's rights movements as well as anti-war efforts. But they knew change needed to happen at the policy level, so those 47 sisters voted to form a lobbying organization to push for social justice in the nation's laws.

That organization, the Catholic social justice lobby Network, became reality on April 17, 1972. Today, the nonprofit has more than two dozen staffers and volunteers, 100,000 members and supporters, and national stature. The nonprofit will celebrate its golden anniversary with a gala April 22.

For 50 years, Network has lobbied members of Congress for laws and policies that reflect Catholic social justice teaching and graded representatives and senators on whether their votes reflect those teachings. They have trained thousands of people through their legislative workshops on how to advocate for their beliefs in Washington and back home as well as how to organize to be effective. Their biggest victory: passage of the Affordable Care Act in 2010, for which Network lobbied. 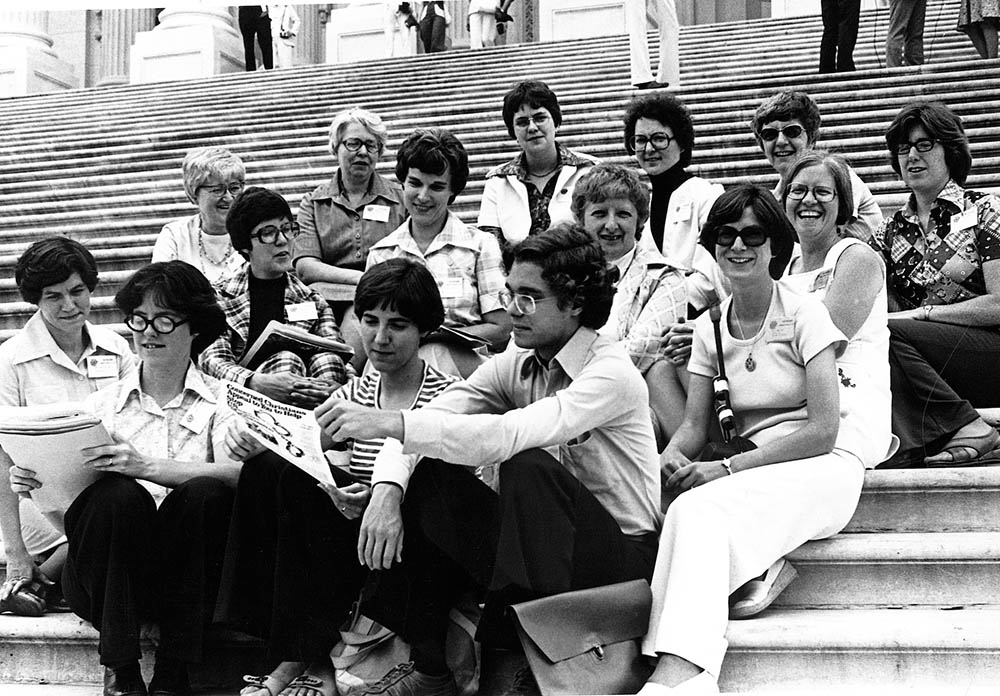 Catholic sisters are seen at one of Network's legislative sessions in the 1970s. The social justice lobby began in April 1972, and Network is starting celebrations of its 50th anniversary on Dec. 17. (Courtesy of Network)

Mercy Sr. Mara Rutten, Network's historian, said all the funding in the early days — what little there was of it — came from Catholic women religious.

"You get a bunch of people who've taken a vow of poverty, they don't carry a lot of cash," she said.

Click here to read the timeline Network created to celebrate its golden anniversary.

The 47 sisters at that meeting at Trinity each committed to going home and raising $50. And by April 17, 1972, Network had an executive director. Adrian Dominican Sr. Carol Coston never considered heading the organization, but when her fellow sisters chose her to be the founding director, she couldn't say no.

"It was one of those events where you felt like you couldn't not respond," Coston said. "Even though it was a great unknown, I felt it was what I needed to do."

Sr. Angela Fitzpatrick, an Ursuline Sister of Mount St. Joseph, Kentucky, felt similarly. She was still in temporary vows but attended that December 1971 meeting after going along with another sister who had been invited.

"I was just a young, unprofessed sister, but you felt a call, you felt like you had to say yes," Fitzpatrick said. "It was all Spirit-driven."

The National Center for Urban Ethnic Affairs let Coston share their office space and their phone. Two Sacred Heart sisters in Washington, D.C., said she could live with them. Soon, the little organization was growing.

At first, representatives and senators were condescending, Coston said.

"But after the first couple of presentations, they realized we had done our homework and we knew what we were talking about," she said. 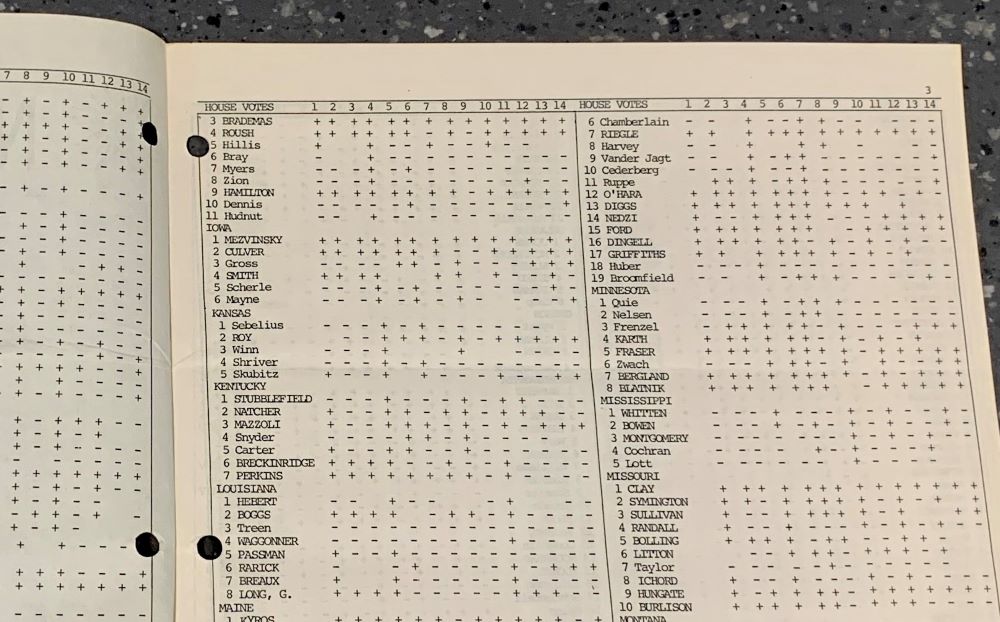 The first Network congressional voting record was published in January 1974 for the 93rd Congress, which met from January to December 1973. The scorecard gave pluses or minuses to legislators on 14 House votes and 14 Senate votes. (Courtesy of Network Lobby for Catholic Social Justice)

In 1974, Network chose 14 bills from the previous year that related to Catholic social justice teaching — such as poverty and housing — and created a voting-record scorecard, giving members of Congress a plus sign if they voted to advance those principles or a minus sign if they didn't.

Network's lobbyists hand-delivered the scorecards to Capitol Hill, and they became an easy talking point.

"You could see, if your congressman had a whole string of minuses, they weren't voting along with Catholic social justice teaching."

From the beginning, Network has concentrated on the church's positions on social justice and has worked with legislators from any party who can help advance those principles.

"There was a big distance between Republican voting records and Democratic voting records, but it wasn't as vicious as it is now," Coston said. "We would try to build on what was positive. And we would take solace in the little victories we won here and there." 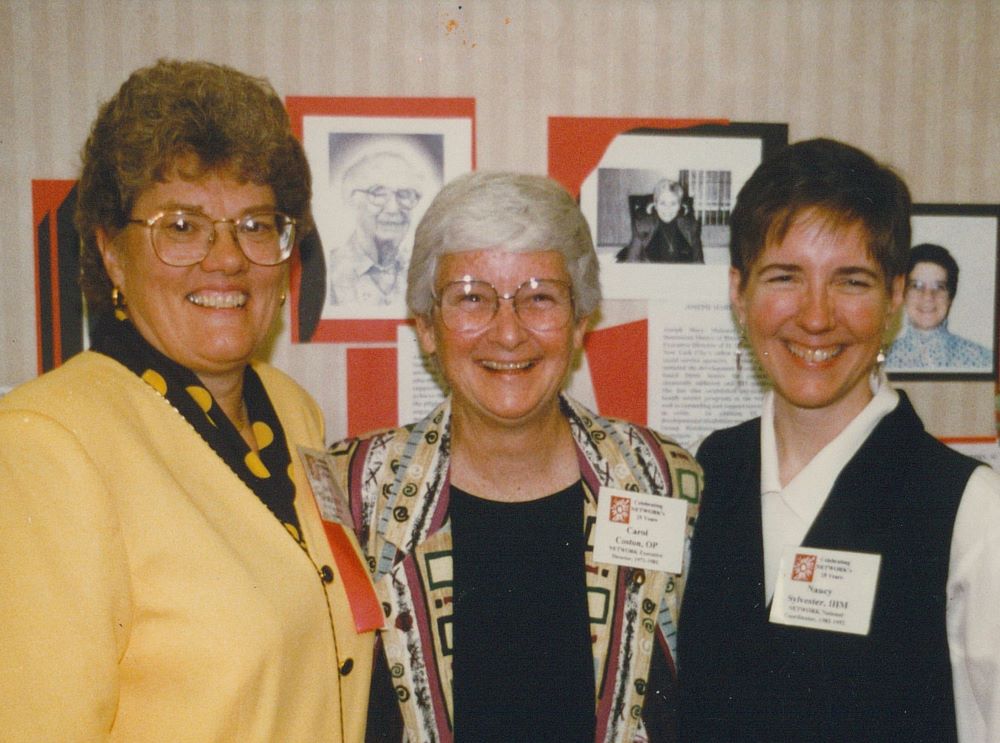 Coston said when she started, she read all the church's encyclicals on social justice, then made charts showing how all of Network's positions were grounded in church teaching.

"One major superior said, 'You ought to publish that,' " she said. "Catholic Social Justice Reflection Guide," which Network still publishes a version of today, became "one of our bestsellers."

Coston said she knew the U.S. Conference of Catholic Bishops had done a lot of research on social justice issues prior to Network's founding, so she asked if she could look it over to be as informed as possible. Of a four-drawer file cabinet, she said, only one small part of one drawer was on issues such as poverty and racism, while the rest was on parochial school funding, abortion and contraception.

"We chose not to take a position on those things because the position of the institutional church was clear," she said. "We thought we would fill in the areas where it wasn't clear what the church position was."

Ten years after Network was founded, Immaculate Heart of Mary Sr. Nancy Sylvester became executive director, a role she held until 1992. Sylvester is now the founder and executive director of the Institute for Communal Contemplation and Dialogue as well as a columnist for Global Sisters Report.

Sylvester said while the 1970s were a fertile time for social justice in the Catholic Church, the decade also saw a change in national politics, as a new generation ran for office to bring about reform after the Watergate scandal.

"We talked about it being a political ministry," Sylvester said. "We knew we were not out there for our own purposes, unlike other lobbyists."

Key to Network's success, she said, was bringing people impacted by federal policies to Washington to tell their stories.

"We weren't representing ourselves. We were representing the poor people, the sugarcane workers, the people who ministered in Nicaragua and could talk about what was happening there," Sylvester said. "There will always be people who can just dismiss things they don't agree with, but it's harder to dismiss a story from someone the policy is victimizing."

'The context on the Hill has changed dramatically. But we're going to do what the sisters have always done, which is to stay true to Catholic social teaching.'
—Mary Novak

Democrats and Republicans could once work together, but that is almost impossible now, Sylvester said.

"It has to be addressed," she said. "But as long as all we have is people yelling at each other, I don't see a lot of hope."

What has made Network successful, Sylvester said, is that the group adapted to changing times without losing the foundation it was built upon.

"Through it all, Network is a witness to another way, an approach that comes from compassion and love rather than fear," she said. 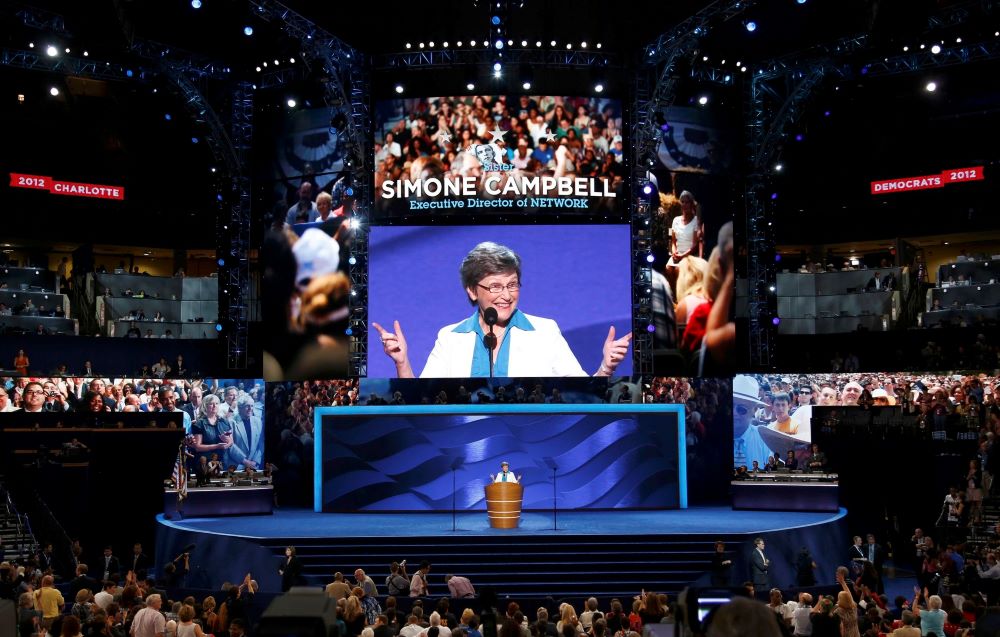 She, too, worries about the political divisions and how deep they have become.

"A democracy can't survive unless we have the capacity to talk to each other and make things work," Campbell said. "We need to strengthen the center of our nation and have compromise and find a shared way forward."

While Campbell was executive director, Network faced what would have ended many other organizations: In 2012, just days after the nonprofit celebrated its 40th anniversary, the Vatican announced it was ordering the Leadership Conference of Women Religious to reform its statutes, programs and affiliations. Among the complaints was working too closely with Network, which in Rome's view focused too much on social justice and not enough on abortion and homosexuality. The choice decades earlier to leave those issues to the bishops, who seemed to have them well in hand, was now seen as straying from church teaching.

But the censure instead catapulted Network into the national limelight. It led to national media attention, and Campbell gave interviews on television shows and spoke at the 2012 Democratic National Convention. It also led to the creation of Nuns on the Bus.

"The reaction [to the investigation] from the laity was: 'How dare you?' " Campbell said. "But we never said a bad word about the bishops, ever. In fact, on that first bus trip, we handed out the bishops' statement that Rep. Paul Ryan's [proposed federal] budget fails the basic moral test. We happily said, 'We stand with our bishops.' "

Related: Sr. Simone Campbell isn't sure what's next, but knows the Spirit will lead her 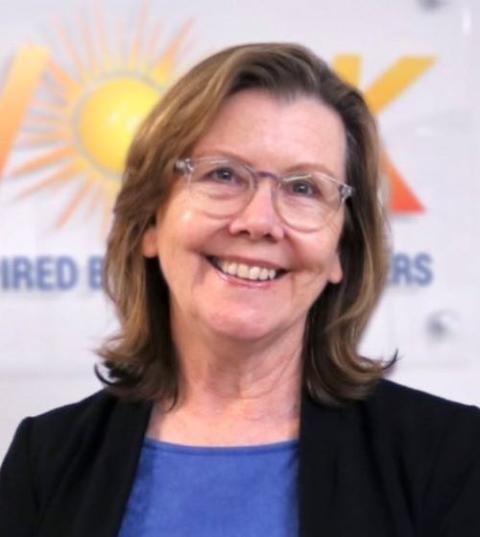 Mary Novak took over as executive director a year ago. She is the first executive director who is not a sister, but she is an associate with the Congregation of St. Joseph. She knew she was taking on a big responsibility.
"There were many big shoes to fill. It really did feel more than a bit intimidating — this was the first intercongregational ministry of Catholic sisters in the nation," Novak said. "The legacy of this ministry... I had to take a deep breath to ground myself."

Novak said that just as Network grew out of sisters responding to the Vatican II call to go back to their founding charisms, now, the organization is looking at its history and using it as a foundation for its future.

"It's important to start the history work first to know from where we came," Novak said. "We're going to continue focusing on dismantling structural racism, forming a truly inclusive and multiracial democracy, and building new political structures that really put human dignity over profits."

Novak said the need for Network has not gone away.

"The context on the Hill has changed dramatically," she said. "But we're going to do what the sisters have always done, which is to stay true to Catholic social teaching."

Sr. Ann Scholz of the School Sisters of Notre Dame said Network also will continue to add laity to its ranks.

She said the organization lasted its first 50 years because it was founded by women religious, giving it a built-in community of support.

"Throughout those early years, the primary members were religious and their congregations, and they have staying power," said Scholz, who is LCWR's associate director for social mission and has represented LCWR on Network's board for more than a decade. "It was always a group effort. Certainly, folks like Carol Coston played a significant role, but it did not belong to a single founder, it didn't belong to a single religious congregation."

The explosion of support from laypeople after the Vatican investigation not only helped the organization thrive, she said, but shows the way for the future.

"It demonstrated the fact that there is a lay Catholic community that longs to be a part of social justice, and Network is a way they can do that," Scholz said. "I think that's where Network's future lies: building on the tradition founded by Catholic sisters and extending way beyond sisters to the laity."