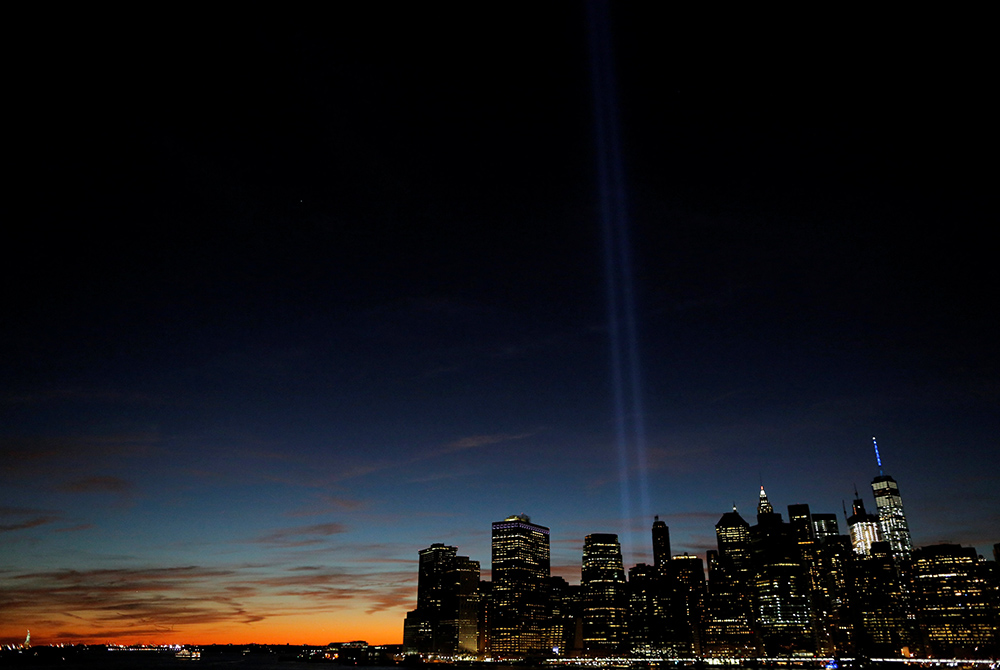 The "Tribute in Light" is seen on the eve of the 15th anniversary of the 9/11 attacks on the World Trade Center in New York Sept. 10, 2015. The Sept. 11, 2001, terrorist attacks claimed the lives of nearly 3,000 people in New York City, Shanksville, Pennsylvania, and at the Pentagon. (CNS/Reuters/Andrew Kelly)

Editor's note: Global Sisters Report is publishing this column in place of its usual Horizons column to honor the 20th anniversary of the 9/11 attacks on New York City. Horizons will instead appear on Monday, Sept. 13.

Sept. 11, 2001, was a beautiful clear day. There was a brilliant blue sky with not a cloud in sight. It also happened to be primary election day for New Yorkers who were scurrying to the polls on their way to work.

I was at work at what was then the National Pastoral Life Center in downtown Manhattan on Bleecker and Elizabeth Streets, just across the street from the north end of Little Italy. The building, which once housed a Sicilian parish and school, is now the Sheen Center for Thought & Culture of the Archdiocese of New York.

At 8:50 a.m.* on that fateful day, my assistant, Bob, came running into our office, shouting that a plane just hit the World Trade Center, and he turned on the TV. We did not hear the hit or the low-flying plane because of our noisy air conditioners, so we were surprised to see a gaping hole and fire on the north side of the building, on a local broadcast. We thought it was a small plane that might have lost control and hit the top of the building. I called my mother right away and told her to put on the television and get the news about the World Trade Center. I told her that I was going up to the roof and would call again.

Our office was less than a mile north of the World Trade Center. The buildings towered over our neighborhood. A coworker and I went up to the roof to try to figure out what was going on. Sirens began to blare as we stood there looking at the gigantic hole in the World Trade Center. Suddenly a huge plane circled around flying at a crazy angle. I started yelling, "What is that plane doing, it is flying sideways" — and then it hit! An enormous fireball of flame seemed to come right at us as we stood there helpless and bewildered, feeling the heat even from that distance.

It was awful and unreal. I realized that it was a terrorist attack but for a few seconds, I had a hard time determining if it was real or whether I was in a movie. I was very shaken as were all of my colleagues who were watching this on the TV downstairs. We had a hard time trying to comprehend what was happening. We had no idea how many people might have been killed. When we went back down to the office we heard about the attack on the Pentagon and the crash near Pittsburgh but at that point, even commentators were not sure.

As we went through a staff meeting and prayer, we heard a loud roar like another jet flying extremely low. We instinctively ducked and realized later that it was the first tower of the WTC falling. A half hour later we heard the second fall. We were frozen with disbelief.

The phones were ringing but we could not call out for hours. Email worked before the phones. We could not leave the TV or the radio, yet we said things like, "Shall we get a pizza?" not even comprehending that nothing was open, nor would anything be open!

Two of my coworkers and I attempted to go and give blood, but the hospitals could not take us because of the overwhelming response. What we saw on the street was also like a movie. We saw hundreds of people, silent and dust covered, walking north out of lower Manhattan. There were water and juice stations set up by churches and Bowery missions. People were trying to be helpful and supportive. There was no traffic except on First Avenue going north since the FDR Drive was shut down because of the proximity to the United Nations complex.

It was eerily silent and grim, people upset, shocked, disbelieving, and angry. I noticed that even though there was no traffic, people walked on the sidewalks in an orderly, gentle fashion, and not in the street. Fighter jets were flying above us and people stopped to look up at them — a sight not seen before in New York City. Like me, they were wondering about impending war and what might come next. The only sounds were police whistles and the continual scream of sirens roaring through the city.

It was like nothing that I ever thought I would experience in my lifetime in New York City or any other place. Today, for those of us who witnessed this tragic event, it is seared in our memory. In my office, I have two photos: one of the twin towers standing majestically, and the other, a picture taken from Brooklyn of a small fire truck crossing the Brooklyn Bridge, racing toward the smoking towers. The truck and firefighters never returned.

As people around the world have experienced horrors of all sorts — war, natural disasters and much more — we are forever changed. But such experiences call us to help make change that brings people together on all levels; to value human life and dignity; and to work toward a world where there is peace, harmony and all of the things people need to live well. That is what God calls us to.

*An earlier version of this column gave an incorrect time.

Some of the content of this column first appeared in a letter the author wrote for her community. 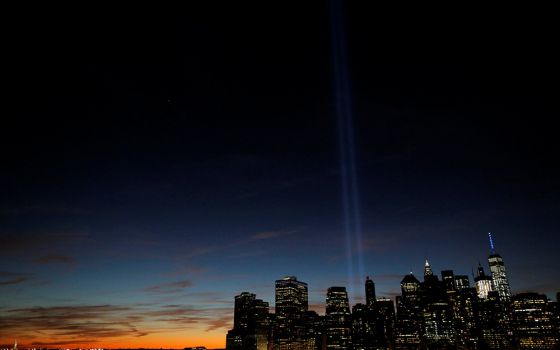 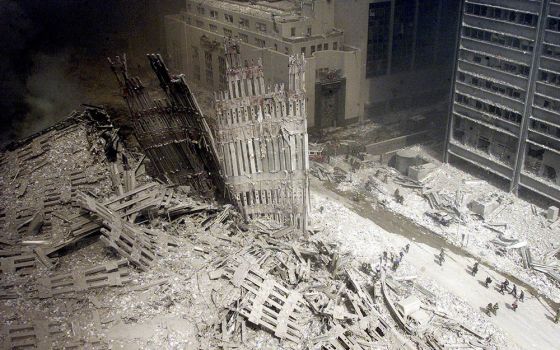