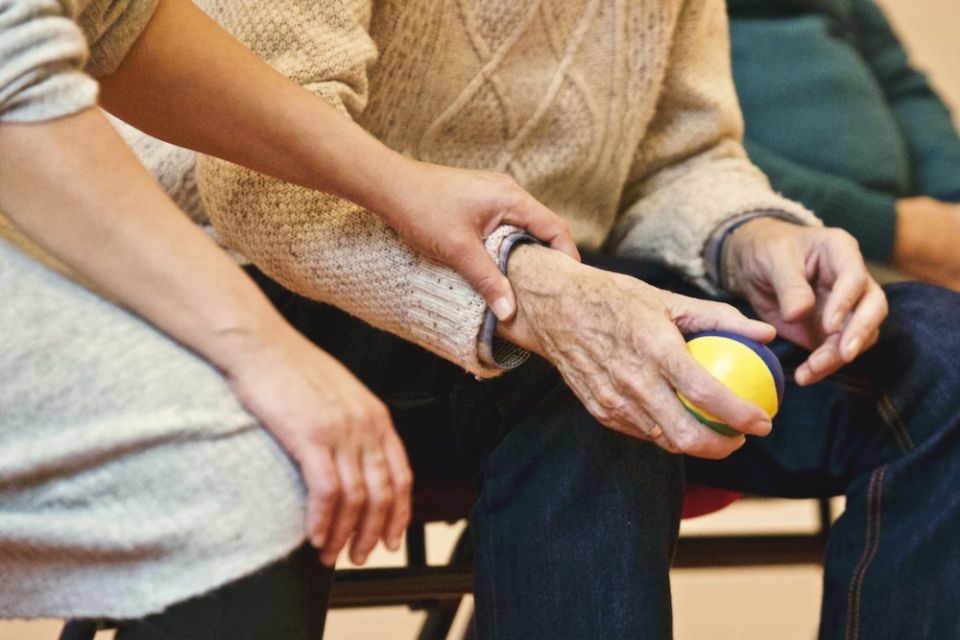 This Lent, I've been reflecting and ruminating on the opening lines of Gaudium et Spes, the Pastoral Constitution on the Church in the Modern World from the Second Vatican Council:

What is the call during these 40 days for those of us who follow in the footsteps of Christ? What is my own particular call, as a woman religious, during these times of pervasive anxiety and elusive joy? My reflection has been grounded in some recent encounters with loved ones and strangers.

The weekend before Ash Wednesday found me reuniting with a long-time friend, whose father passed away a couple of years ago after a long struggle with Alzheimer's. My own 86-year-old father has dementia, and so we discussed how challenging the journey of daughterly accompaniment can be. And also, how precious.

I had recently seen a play called "The Father," which dramatizes this father/daughter experience from the perspective of the father who is experiencing dementia. You see through his eyes how frustrating it can be to confuse days and times and even years. You sympathize as he navigates physical reality, not knowing from moment to moment if he is in his own apartment or one that looks like it but is imperceptibly different. You witness him trying to decipher who is who, (is that his daughter or his care giver?), all the while pretending that he knows, even when he doesn't. You suffer with him when he learns again, as if for the first time, about the death of a loved one. His frustration and confusion become yours, through the experience of the play.

It is through our encounters that we can begin to understand the powerful invitation of those lines from Gaudium et Spes. I left the play, and later my conversation with my friend, with my Dad's experience truly echoing in my own heart in a new way.

Other recent encounters are also still reverberating in my heart. Conversations with immigrant young adults, for example, have deepened my understanding of the real-life impacts of our nation's immigration policy. The concern of one young adult immigrant with citizenship — for friends who are only recipients of deferred action for childhood arrivals (DACA) status and who have an unknown future — deeply touched me. Their shared commitment to work for immigration justice is inspiring. I found myself thinking of people I know in mixed immigration status families. Like most issues in the news, the reality is very human and messy rather than cut-and-dried. I left these encounters with a new appreciation for the mix of anxiety and joy, sorrow and hope that permeates their lives each day.

Family and friends are precious cargo in our lives. It helps me to remember, from time to time, that everyone is someone else's friend or family. Each person journeys through a daily mix of joy and sorrow, hopeful longing and grief. Our resilience varies in how we are able to bounce back from difficult experiences and bask in the renewing light of joyful moments. The invitation of Gaudium et Spes is to strengthen each other, share the burdens, and spread the joyful hope along the way.

It turns out that last year, Gaudium et Spes was a source of reflection for Pope Francis during his Lenten retreat, led by Benedictine Abbot Bernardo Francesco Maria Gianni. Addressing the abbot at the end of the retreat, Francis said: "I was struck by your work to make us enter, as the Word did, into humanity; and understand that God always makes himself present in the human. He did it the first time in the Incarnation of the Word, but He is also present in the traces He leaves in the human. Equal to the incarnation of the Word — undivided and unconfused — He is there. And our job is maybe to go on."

Sometimes our Lenten practices lead us to step back, to give something up, or to seek solitude. This year, the invitation I've heard is to enter more fully into the human experience, to engage in meaningful encounters, and to simply go on together as we await the joy of Easter. In this way, I pray that I will continue on the journey in the spirit of these closing lines of Gaudium et Spes:

Mindful of the words of Lord's saying: 'by this all will know that you are my disciples, if you have love for one another' (John 13:35), Christians cannot yearn for anything more ardently than to serve the people of the modern world with mounting generosity and success. (GS 93)

In Lent, should I pray only the sorrowful mysteries of the rosary?

The call of a simple Lent: Unclutter your spiritual house

Lent: A season to transform in love and fraternity

It's a plastic world

From ashes to insight

Images imprinted on our hearts and souls