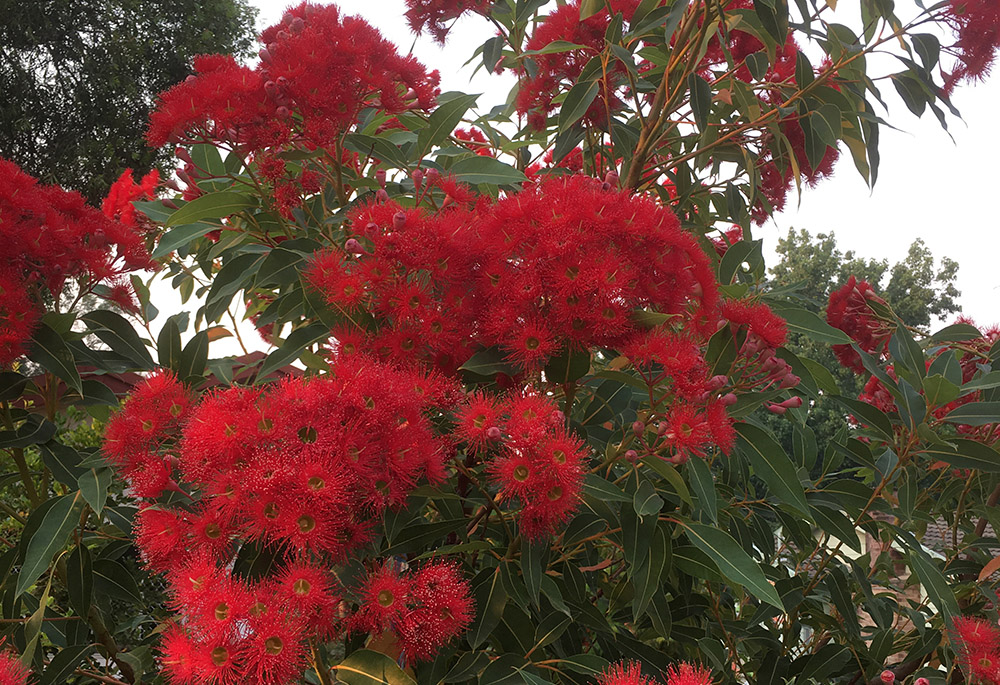 A gum tree in Australia; its "Christmassy" flowers — made of the male stamens — look like fireworks. (Tracey Edstein)

The event commemorated all over the world on Dec. 25 occurred in the Northern Hemisphere — and since then, images that are universally recognized as representing the birth of Mary and Joseph's son, Jesus, have a wintry air.

In many parts of the world, especially those countries with a Western tradition, this makes perfect sense and is rarely, if ever, questioned. However, for those celebrating Christmas in the Southern Hemisphere, images of snowmen, holly and ivy, red-suited gentlemen (Santa's helpers) and mulled wine don't quite cut it. Of course, these images have no real connection to the time-hallowed Christmas story but they have become ubiquitous.

As an Australian who loathes the intense heat of summer (yes, we do exist!) I find these images appealing — alluring even! However, celebrating Christmas down under is different, and so for those to whom a hot Christmas is a foreign concept, here's a sun-tinged window into the reality.

In Australia, Christmas Day and Dec. 26 (St Stephen's Day or Boxing Day) are public holidays. When Christmas falls on a Thursday through to Monday, it becomes a four-day weekend! Significantly, schools in Australia close for five weeks beginning a few days before Christmas and many members of the community take up to a month's annual leave, so from Christmas Eve onwards, a festive feel prevails.

For those who observe Christmas as a religious feast, and for those who simply anticipate a well-earned break, the temperature makes a difference! 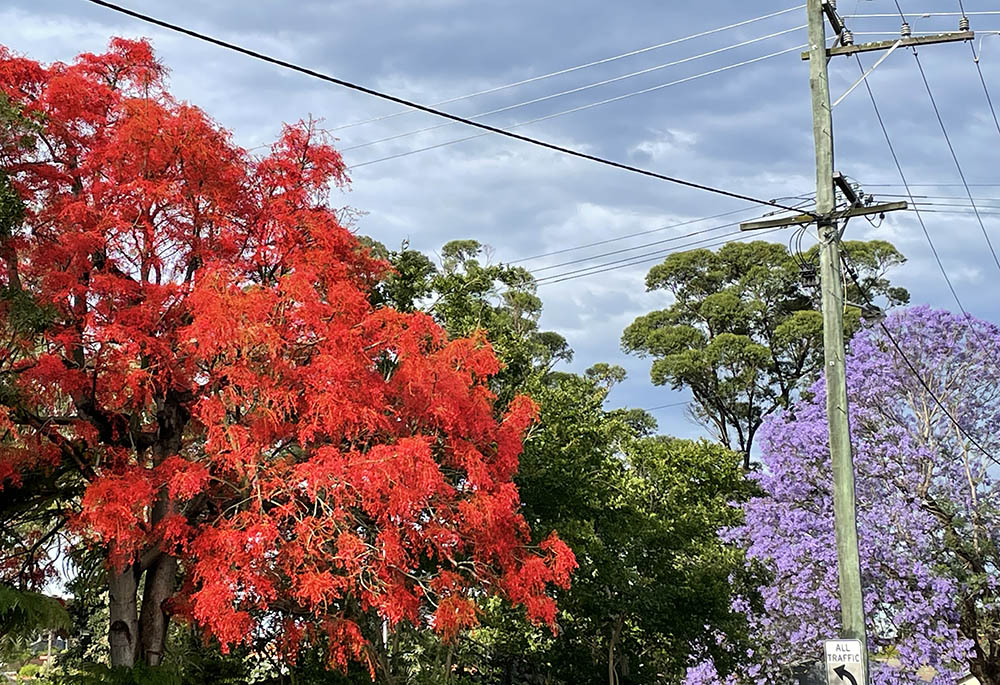 A flame tree that blooms around Christmastime, next to an “Advent” Jacaranda tree in Australia (Tracey Edstein)

Caroling choirs lead community celebrations in parks and gardens without scarves and gloves. In fact, they may need Akubra hats and fans!

The practice of decorating homes and public spaces with elaborate lights and festive scenes is just as popular as in the Northern Hemisphere, but those who make the pilgrimage to see them need to wait not only for darkness but for the temperature to drop.

Many parishes celebrate the Vigil Mass of Christmas outdoors, to allow for increased crowds and perhaps catch any prevailing breezes. Casual wear is de rigueur and often the mood is relaxed, yet respectful. A former parish priest in my parish would follow the Vigil Mass with a brief report on Santa's progress, reminding children that heading to bed early was highly recommended!

This approach is very family-friendly and makes it easy for younger generations who might not participate regularly to feel comfortable and included.

My family's tradition includes a post-Christmas Eve Mass supper which fortifies us for the big day to come. With daylight saving added to the mix, you need to stay up late to see a star in any direction!

For many years my daily routine has included an early morning walk. On Christmas Day (and on other significant days) I like to walk to the local cemetery to visit my father's grave. I need a hat, sunglasses and insect repellent, and I hope that the plovers and magpies are not in the mood for swooping!

Keeping cool is a priority. Even babies' swaddling clothes are minimal and backyard pools come into their own. For those living or holidaying on the coast, a swim, if not the full kit and caboodle of Christmas lunch, is essential.

Some maintain the traditions of northern climes with eggnog, baked ham, turkey, plum pudding and mince pies; others create their own traditions including seafood, salad, pavlova (a light and airy Australian dessert) and lots of chilled drinks. A popular seasonal song is Nick Minchin's "White Wine in the Sun." In many families, grace is prayed and those around the table may acknowledge a blessing of the year about to end or express in prayer a hope for the year about to begin.

There are Australian carols — but to be honest, they've never really caught on. "The Carol of the Birds" proclaims:

Out on the plains the brolgas are dancing
Lifting their feet like war horses prancing
Up to the sun the woodlarks go winging
Faint in the dawn light echoes their singing
Orana! Orana! Orana to Christmas Day! 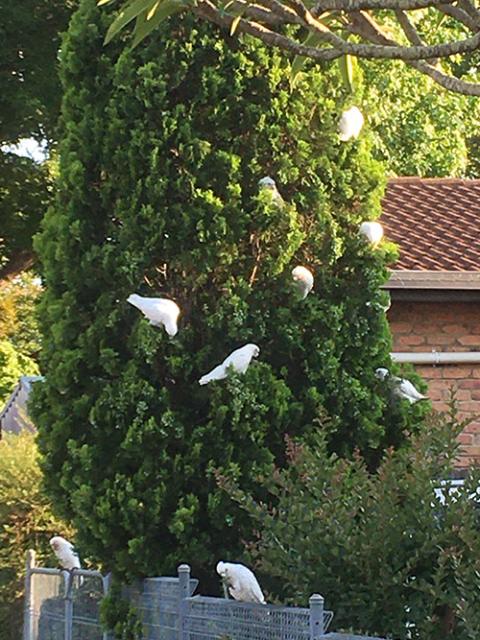 A tree full of white cockatoos in Australia (Tracey Edstein)

Orana means "welcome" and this carol was written by William Garnet James and John Wheeler. It reminds me that the white cockatoos often seen in summer months perch in evergreen trees like living decorations. However, these lovely local images have failed to supplant herald angels singing, shepherds watching their flocks by night, and the manger that was pressed into service because there was no crib for a bed.

Incidentally, the shepherd dimension of the Nativity story really doesn't cut it down under. We have more sheep than people — in fact three sheep per person — and so the biblical image of the shepherd knowing his sheep by name is way more pastoral (pardon the pun) than Australian graziers can manage. Nevertheless, a Nativity scene that features sheep feels right. After all, the baby is the Lamb of God. And incidentally, Nativity plays in Australia often feature shepherds wearing striped beach towels with one end rolled carefully around a small head. We have no shortage of beach towels!

Last Christmas I spent a lot of time looking for a Nativity set for a friend who was preparing to enjoy her first Christmas in her new home. I was happy with the slightly South American-flavored one I purchased but also on offer were versions closer to home — well, kind of. One featured a full cast of kangaroos — Jesus as a joey in Mary's pouch — and there was a similar koala version. Truly. There is a lot to be said for upholding the tradition.

Last Christmas I also spent time looking for an Australian Christmas card for English friends. It seemed only fair, given that spending a recent Christmas in London, I had delighted in the gloriously Northern Hemisphere cards with cassocked choirboys and churches with snowy steeples. However, it was difficult to get beyond bland beaches or Santa on a surfboard. My friends would not describe themselves as religious so I settled for a hilarious Christmas jumper (sweater) cartoon. We don't have Christmas jumpers in Australia. We have T-shirts but it's not the same.

Liturgically, apart from Masses shaded by gum trees with the congregation on folding chairs and some wearing boardies (shorts), there is no difference between the hemispheres. A case could perhaps be made for summer weight vestments but at least some clergy feel free to ditch the heavy chasuble and run with alb, stole and sandals. Quite Christ-like really!

Many Australians include on their bucket list experiencing "a white Christmas" and as you do the hot concrete dance on the way to the beach you understand. In spraying "snow" on windows, leaving carrots for visiting reindeer and singing songs about winter wonderlands, are we Aussies merely distracting ourselves or yearning for a lost spiritual homeland?

Whatever the answer to that rhetorical question, the fundamental truth is that Jesus comes as a much-anticipated, tiny, vulnerable baby for all of us, everywhere. The life that we say began on Dec. 25 changed the lives of each of us, and that's what matters.