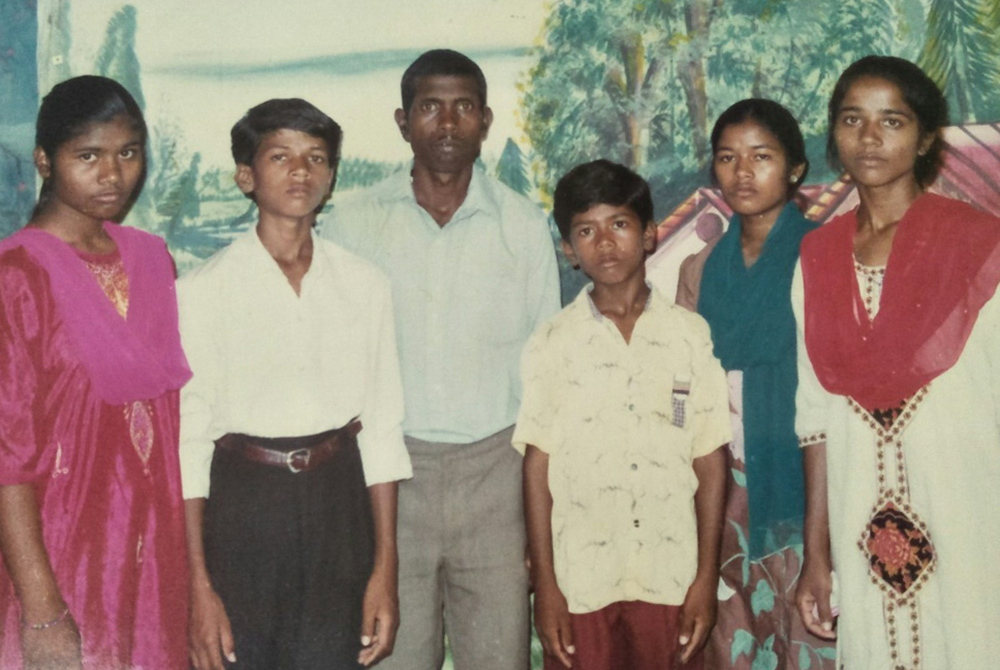 Sister Poonam, far right, is pictured with her family in a 1994 photo taken after the death of her mother. Also pictured, from left:
her sister Sukrita, brother Sanju, father Cornelius, youngest brother Manoj, and her sister Anita. (Courtesy of Poonam Kujur)

I walk step by step amid life's challenges. Even when I can't see the way before me, I can feel God's presence within me because I trust that God is leading me through wondrous ways.

I was born in a God-fearing family, in Chhattisgarh, central India state. I love and am happy being a Christian. My godparents loved me a lot — I'm the firstborn in the family. Right from the beginning, my parents knew the importance of education and encouraged us to pursue education with commitment, passion and interest.

We belong to an Uraon tribe, an Indigenous group. In those days in our culture, women were hardly educated or rarely had government jobs. Of course, those who lived in town were educated and had employment opportunities.

My grandfather had been in the Indian army and my grandmother a housewife. They educated their six sons well, except my father, who was not so well-educated because they wanted him to take up agriculture.

The eldest son went on to become a diocesan priest in India, and was the first priest in our parish. I was very happy to have a priest in the family. The other four sons were also well-placed. But my father also had a deep-driving desire to get educated — and he achieved his goal. Having completed his matriculation (11th grade), he married, and I was born a year later.

Meanwhile, my father was thinking about leaving the family and going for higher studies. But when my mother found out she hid his certificates and transcripts in a pillow, telling him that she too wanted to continue her schooling. Higher education was available in the town, so they both decided to go for higher education. When I was six months old, they left me with my grandmother, rented a house and studied. On the weekends, they used to come and stay with me. When it was time for me to go to school, the house helper girl went with me. Our early education was in the parish school, and we took part in everything.

My mother was very intelligent, curious, hard-working, visionary and courageous. She used to plan ahead of time for family matters, her studies, and other concerns of life. She got good grades in her college work. After graduation they both applied for teachers' training. During her training period, she was blessed with a son (her second child and my younger brother). As the mother of a newborn, she worked hard and managed everything, completing her two years of training successfully. Immediately she got a government job.

Though my maternal grandmother was not educated, she had allowed my mother to study and to take a job, though she herself was a housewife. Villagers criticized my grandma a lot, telling her: "Why are you sending your daughter to go out for the job?" It was a great challenge for my mother. But when she started to work her eyes were opened for higher aspirations for her children.

First of all, she managed and improved our household. Earlier, we had a mud house; she earned enough money to build a concrete house. She bought a motorbike for my father and a bullock cart for the house.

The whole village was amazed to see the changes my mother brought about for the family and in the village. Meanwhile, my father continued his higher studies and took care of the farm with my grandma. Our mother made sure that each of her five children got a good education. As the first child, after my graduation I joined the Sisters of Notre Dame to become a nun. The second girl studied and is now a lecturer; the third girl is a professor at a university; the fourth, a boy, is an engineer; and the fifth boy is a clerk in a public sector bank.

Sadly, our mother died before anyone got their job, but we all have good jobs thanks to her great guidance. It shows that an educated woman can change the family and society. I'm very proud of my beloved mother.

When I consider the faith aspect of my life, I used to hear her say often that the first child "I want to offer to the Lord." That is why she used to tell me to study as much as I could and join any religious congregation to serve the Lord. In those days, no proper road or transportation facilities were available. We had to walk half a day to get a bus to reach a local town. So, for seven years I walked to get my higher studies.

And my father was very particular about our family prayer. Before dinner every day, we had prayer together. Every Sunday we went to Mass at the local parish. At times, especially in the rainy season, we had to cross the flooded river. In those days, there were neither bridges nor boats in the river — there wasn't any easy way to go across. This difficulty never deterred us from attending Mass! My parents would just carry spare dresses for us to wear for Mass.

Their life centered on the Sunday Eucharist. Such was their faith, deeply rooted in the Eucharist. All this has deeply influenced our life and faith. Today, I am happy with what I am, and grateful for my education and my parents' influence.