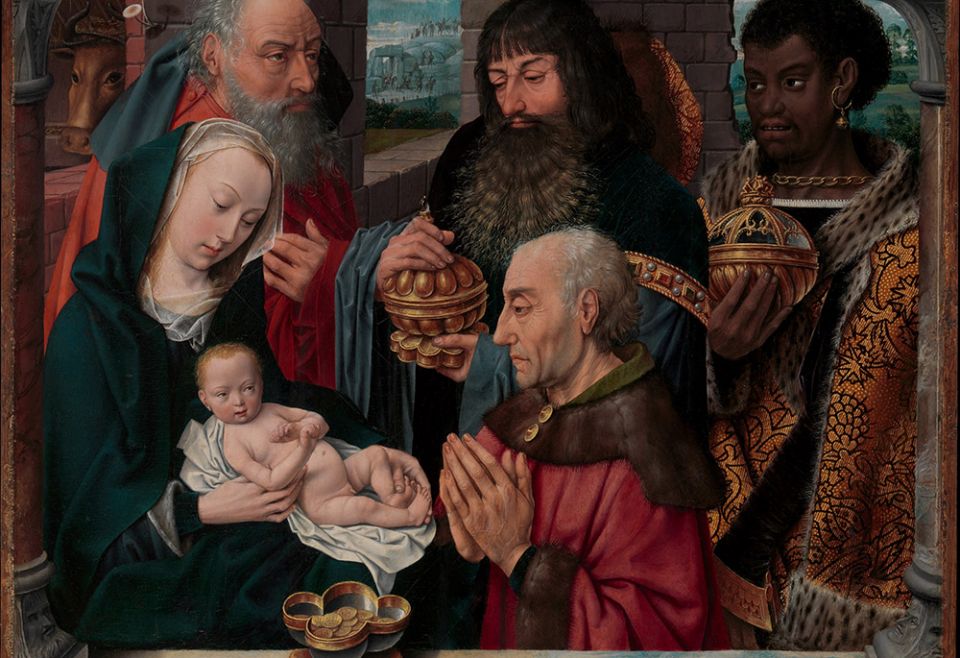 "The Adoration of the Magi," a 15th century oil painting copy after Hugo van der Goes (Metropolitan Museum of Art)

As a writer, I am always on the lookout for books or articles that can help me enhance my craft and inspire me to look at things from another perspective. I recently reread Rust Hills' Writing in General and the Short Story in Particular. I was particularly drawn this time to the few pages where he studies Epiphany as a "literary term."

Hills highlights James Joyce's work and his focus on epiphanies, saying that Joyce's "epiphanies are both a kind of experience and also a literary genre — both a way of seeing or hearing and also a way of showing and writing."

I am particularly fond of the feast of the Epiphany. I love the golds around the altar and the wide sweep of Godly manifestations. The notion that three people, traveling many miles, bearing some gifts of "wisdom" (and some of a symbolic nature in the gold, frankincense and myrrh as well) come looking for a king and arrive to meet a toddler, who is their big discovery, their epiphany … well. Likely Jesus was at least 2 and had perhaps just returned from Egypt. Absurd to nonbelievers for sure, and suspect to even some of us.

The story left behind for us, though a rather short one, reveals something more of the face of God — and perhaps that revelation, that epiphany — is the point. God throughout the Hebrew Bible and eventually the Christian texts wanted a series of epiphanies to engage the human community, to the extent that we might keep discovering other aspects of the countenance of God, right up to the Pauline reminder that Jesus is indeed the face of God (2 Corinthians 4:4). God is quite keen on letting us know, see and experience a living God, not a dead idea or faulty notions that enhance nothing but darkness trying to overcome the light. Then our experience might be changed into God's works of love.

God took on the role of not only appearing but leaving the story behind so that today might be the day we encounter God in the words, phrases and stories of the Scriptures. What a gift. These help us answer the question: What is God like? The Second Vatican Council made something of this in Dei Verbum, the Dogmatic Constitution on Divine Revelation. Of this Jesuit Fr. R.A.F. MacKenzie writes:

The document's main subject is revelation. This is a manifestation by God — primarily of Himself; secondarily of His will and intentions. … [E]very single such communication from God is part of a larger pattern … destined ultimately for the good of all. … Passed on orally, it becomes tradition; recorded in writing, it becomes Scripture.

To this point let's consider another part of the Christmas manifestation. The shepherds. As The New Jerome Biblical Commentary notes in the section about Luke's Gospel, the authors quote Jesus and the New Age and show God appearing — or at least God's minions shining forth in the explosion of angels and music —appearing to those "mangy, stinking, bathless shepherds [who] are in their ritual uncleanness an encouragement for all who lack religious status." It was not just to the three pagans we've already mentioned, but to these unwise, bearing no gifts, and having no place in the formal religious community fellas. Really? Who did they pass the story on to? What yet needs to be revealed?

We have a little taste in the Gospel of John where we might want to consider that the whole point of 'the word' is to "guide and illuminate humans to partake of divine fullness," according to The New Jerome Biblical Commentary. One word, that was all God had to say, yet illumination is critical to epiphanies. If the incident or word does not strike deeply, or blind us (as in St. Paul's Damascus experience) then perhaps it's a little peek in. No, these knock our socks off; these turn us around. For those who saw him, Jesus' resurrection was an epiphany, big time. None of the followers were the same again.

Mary Magdalen (John 20:11-18) saw what she thought she saw (a gardener) and was corrected by Jesus to see the new reality. Then her only desire was to tell us all about this epiphany, this amazing, wonderful thing God had done. St. Faustina Kowalska saw the illumination of loving light pierce the side of Jesus and flow with mercy; energy causing us to speak of mercy as an aspect of the face of God. Who did she tell?

That Christmas is a mystery, or that any of our major feasts are mysteries, does not need to stop us from seeing epiphanies one after another. We see that in the contemplation of the mysteries of the rosary and other devotional prayers and readings. Right from Mary accepting a "memo" from God to the dream of Joseph to remain with her, to his dream to flee to Egypt, we see epiphanies that cause persons to do things they'd never thought of before.

That the Epiphany clearly shows Jesus as the long-awaited Messiah is important — yet, his baptism and the wedding at Cana are as well. Our wise and gift-bearing three from the East set us off on a journey in search of a "king," royalty who would indeed bring peace to the known world. That everyone — even those pagans, the first fruits of the nations — would welcome this word.

That a Messiah would need to be baptized (showing forth the humility of God), or that his first miracle would be to join a wedding party and show God's lavish partnership in human life, are stunning. There Mary reminds us, the servers, to "do whatever he tells you" (John 2:5). The Catechism of the Catholic Church reminds us that Jesus' "whole life was lived under the sign of persecution. His own share it with him." What an epiphany that is, when someone who thinks they are worshipping and adoring God so perfectly runs into the fact that persecution is part of the deal — often a large part of the privilege of partnership.

"Christian tradition," says the catechism, "has always recognized that God's Word allowed himself to be seen and heard in these theophanies, in which the cloud of the Holy Spirit both revealed him and concealed him in its shadow."

We can name others of course: the Transfiguration, the storm at sea, and the Beatitudes. What was concealed in this divine shadow breaks forth and like Blake wrote, we are challenged to "bear the beams of love."

Lest I have pushed the envelope of epiphany too far, let me end with this. What I really loved in Hills' book was his discussion of James Joyce's story Stephen Hero, when Stephen says:

This is the moment I call epiphany. First: we recognize that the object is one integral thing, then we recognise that it is an organised composite structure, a thing in fact: finally, when the relation of the parts is exquisite, when the parts are adjusted to the special point, we recognise that it is that thing which it is. Its soul, its whatness, leaps to us from the vestment of its appearance. The soul of the commonest object, the structure of which is so adjusted, seems to us radiant. The object achieves its epiphany.

Hills concluded that the idea has always been elastic — why not stretch it further?

The Epiphany celebration invites us to sing with the angels in realms of glory: it offers us the opportunity to reflect on the "whatness" and approach the face of God anew.

Sr. Abri Miriam of Peace is a canonical hermit who lives in low-income housing in the South, hidden in place. She writes and prays.

Spirituality | Through the Epiphany we experience God anew

You have to be carefully taught