Where would you be in all of this, Jesus? 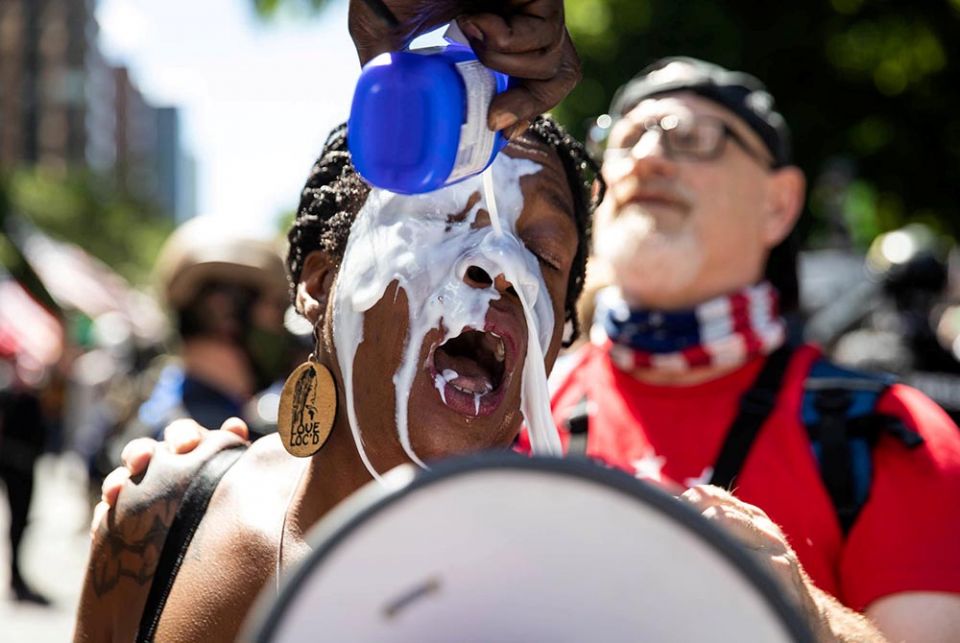 A woman in Portland, Oregon, has her eyes flushed for chemicals Aug. 22 during a protest against racial injustice. (CNS/Maranie Staab, Reuters) 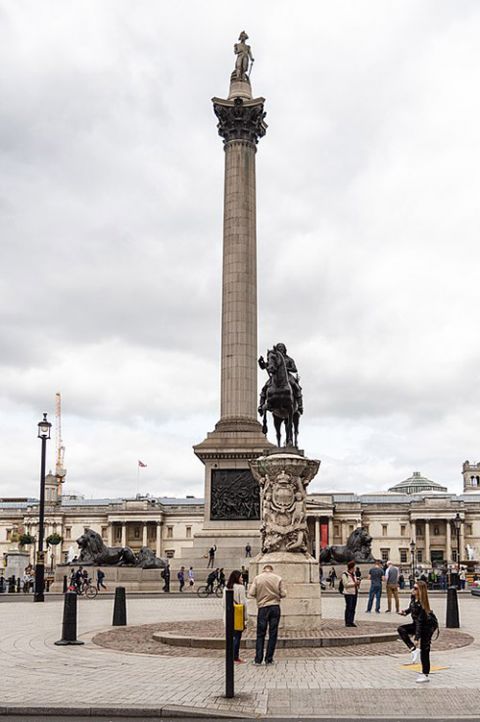 Charing Cross with the equestrian statue of Charles I and behind that Nelson's Column in London. (Wikimedia Commons/Tristan Surtel, CC by 4.0)

In recent days I've been haunted by a poem I found years ago, in my early teaching days, that began "O lonely Christ of Charing Cross" ... Charing Cross being a locality at an intersection in the center of London where several roads meet, and now a busy train station. I had pictured a busy city intersection where thousands of folks hurry past daily, rushing to their job or destination — and in the midst was a lonely Christ. This poem pierced me to the core.

I was grabbed first by the thought of a "lonely Christ" — that stopped me in my tracks! Why would he be lonely? I don't know what the intended message of the poem was, but that image gripped me, stayed with me, periodically popping up into my consciousness, as a reflection of a Christ present in the midst of our busy lives: watching, ready to help, wisdom flowing from his steady gaze — but unnoticed. The loneliness of not being seen, not being felt or sensed, not recognized.

And I have pondered that: Why is he present all around us, among us, and yet not recognized? Because we have our own set construct of who he is and what he's like? What would he be doing here in these crowded, dirty, secular city streets we just pass through?

Over recent years, when the actions of leaders of state and church have made decisions that take my breath away — that seem so far from what the God of mercy or the Jesus of the Beatitudes ever spoke or revealed — I have often wondered why we can't recognize the face of Jesus, why we don't know for sure what he would say about these justice issues, because daily and weekly we hear his unequivocal, unminced words.

So the face of the "lonely Christ of Charing Cross" haunts me, haunts me. Jesus wept over the city of Jerusalem. I can surely understand why. How else would the son of mercy and compassion respond, to immigrants detained and separated from their children; young trafficked girls and boys used and sold; and people of color abused, disrespected, or slowly killed?

Every time I see some decision, reaction, response by leaders or their followers that is clearly opposite the words and actions, the teaching and example of Jesus, I am dumbfounded. Are we reading the same Scriptures? Are we looking at the same Jesus story? How is it he cannot be recognized here and now, right before our eyes?

And last week I was so overwhelmed by the intense feelings and images of the racial violence and the injustice that was being brought to our consciousness, that I could barely continue. Like that child's game — "Where's Waldo? Can you find him in this picture?" — I just kept thinking, "Where would you be, Jesus? In all of these scenes, across our country and globe, where are you?" So I sank into prayer, and this is my morning meditation:

"Where would you be?"

The streets explode with angry protest of violence

and injustice gone too far for too long

and in the clash of civil demonstrators and armored law enforcement

and military soldiers, I look for Your Face. …

And as I meditate on the Face I know,

I can see in the haze where You are.

Still kneeling at George's side, as his breath is crushed,

You keep silent vigil in his dying — Your hand on him

comforting, easing, and leading him forth.

Beside the mothers young and old, with broken hearts

And soul-deep pain, who've lost too many sons and daughters,

I see You — embracing them, infusing hope and Your deep peace

Into their aching hearts. …

There You are again — touching those wounded by "rubber" bullets,

picking up those knocked to the ground, breathing clean air into

the lungs of those pepper-sprayed.

You walk among the crowds …"Peace … Peace …" calming those

ready to ignite in volatile anger. Many a soul finds power and strength

arising where minutes before there was only boiling pain.

I look among the armed guards. You are not armed.

You are not behind barriers, helmeted, carrying batons and shields.

You could never be armed, standing against the people,

shielded from their pain and rage.

But, I look again … I see You moving among the soldiers and police.

You look at them, too, with Your love and mercy.

Yes, these too are Your people. And do You pass through their ranks

peace and human compassion I can only guess!

Some slip through Your fingers, and even as they go too far,

of hate and violence, still — I see Your hand of mercy, forgiving.

When I close my eyes, I see You head-to-head with this young black man,

this swearing, crying young woman. I watch these tender encounters.

Do they see You standing close to them,

hands on their shoulders, infusing peace? Do they sense Your power

as You lean Your head against theirs, imparting hope and

wisdom for new thoughts of how to turn this around?

I ask anyone who ever heard of You, Jesus the Christ,

anyone who believes in You,

anyone who says they follow You — that is, walk Your path in this world —

I ask them, I challenge them, I beg them

to meditate on that scene —

And tell me, where is Jesus?

Where does He stand? What does He do?

Meditate on the One you say you know.

For that, then, is what we must do!

[Cheryl Rose is a member of the Sisters of the Humility of Mary. Presently she is engaged full-time in retreats, spiritual direction, and workshops and programs that facilitate spiritual and personal growth.]

Spirituality | Where would you be in all of this, Jesus?

Movement toward awe through kinship

A birthday party for Thomas Merton, a birth journey for me