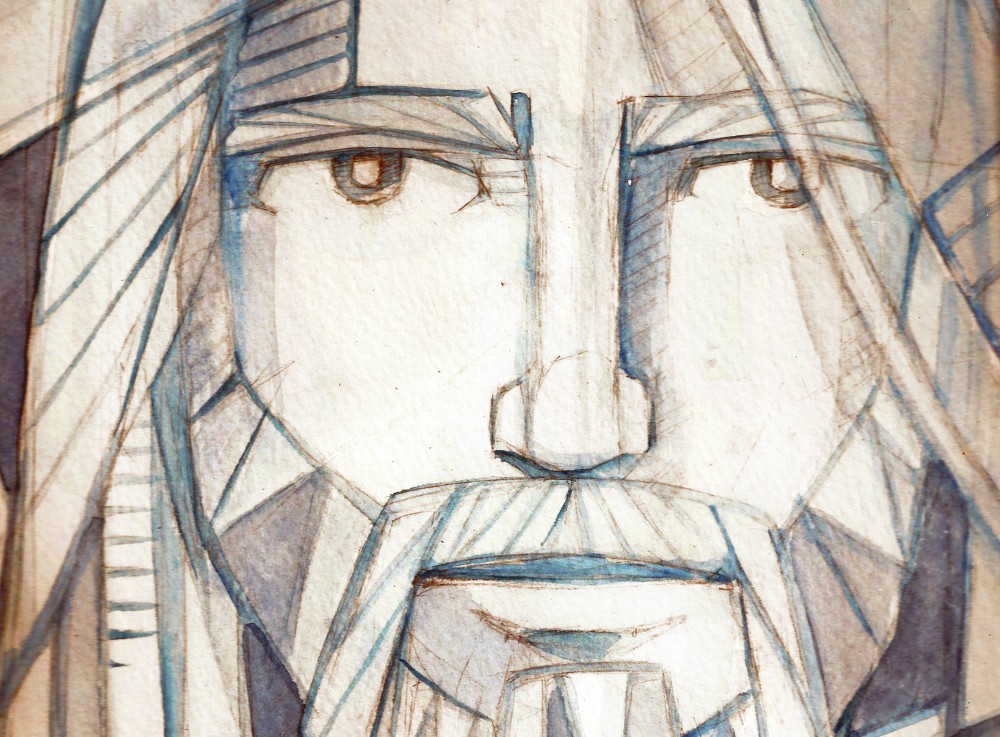 In the September 2017 edition of The Tablet, there was a column written by Christopher Lamb about the pope's visit to Villavicencio, Colombia, titled "The bruised peacemaker," about his apostolic journey to this war-torn area where peace is a rare commodity. 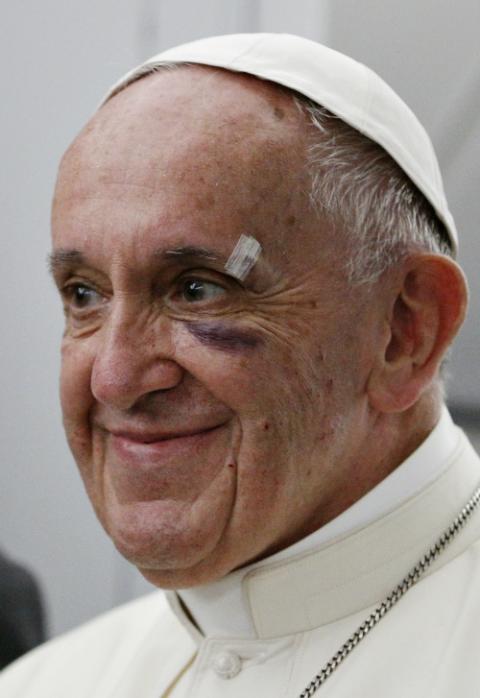 Pope Francis smiles aboard his flight from Cartagena, Colombia, to Rome Sept. 10, 2017. Earlier, the pope cut and bruised his face on the popemobile window when he was greeting people. (CNS/Paul Haring)

Beneath the headline was a photo of the Holy Father with bruises he sustained from a minor accident in the "popemobile," when he tried reaching out to a child. I posted the photo showing the bruised eye of Pope Frances on my WhatsApp status, because it inspired me. I thought the headline was a perfect metaphor for describing the personality and the mission of the current bishop of Rome.

Many on my contact list found it offensive and asked that I remove the photo since they thought it was a negative portrayal of the Holy Father. Their point was clear: "You can't show the world that the pope could get hurt!"

For many Christians, including Catholics, the Holy Father, bishops, priest and religious should not get hurt, because they are men and women of God, not human beings. They cannot make mistakes like the average human, because they are "above humanness." This idea is the reason some lose their faith as Christians — and worst of all, their faith in God. I know people who have stopped being Catholics because they can't bear the numerous stories of sexual abuse by religious people.

The truth is that religious men and women are human beings, ordinary and sinful human beings, chosen from among ordinary people and given a peculiar task. In their limitations, they are able to identify with the people for whom they have been called and were given the task to shepherd.

This perception goes back to the time of Christ Jesus, whom many failed to acknowledge as the Redeemer. Some people in Jesus' time refused to accept him because they thought that the promised Messiah must possess qualities that are beyond human comprehension. He was expected to outlive the messianic era. The Christ wasn't one who would suffer and die at the hands of mortal men.

This perception seems to imply that being human isn't enough, that the human person is no good, and nothing good could come from the human. Therefore, if men and women of God chosen from among humans are to live their human lives without pretensions, not believing themselves "holier than thou," then they can't be accepted.

Jesus' ways were misunderstood. Commentators like William Barclay (in his book The Gospel of Matthew Volume Two) believe that Judas — like the rest of the Zealots seeking to trigger sedition of the people of Judea to rebel against the Roman Empire — did what he did to force or speed up the overthrow of Roman rule, thinking, "This Messiah is wasting time being too lenient, too human and too ordinary."

Evangelists Matthew and Luke present two completely different infancy narratives: Matthew (1:20-23) describes the divinity and mission of the child, while Luke (1:30-35) describes him as son of the most high, the son of God who will be given the throne of his father David.

Yet the theological point of view of both narratives has at its core a common truth about the identity of Jesus: The child is both human and divine. As the four evangelists narrate their stories of Jesus to the climax of his passion, death and eventual resurrection, the humanity and divinity of Jesus gradually unfolds. John in his Gospel, as early as 1:14, makes it clear that the Word became human, full of grace and truth, and lived nowhere but among us.

St. Paul's letter to the Philippians (2:6-8) about the humility and greatness of Jesus reveals that human nature is not totally corrupted, because Christ found it worthy to assume it even though he was in the form of God. Christ was not ashamed to be human.

We know what he did as any ordinary Jew would do: He prayed at the transfiguration, and at the calling of the Twelve, he felt fear, he loved and allowed himself to be loved, he made and maintained friends — Mary, Martha, Lazarus. He touched (a leper) and was touched (by Thomas after the Resurrection), he cooked and ate, he walked among us. He related to the inner circle of followers, his apostles, as friends and brothers.

In fact, he was so ordinary that he was not readily accepted even as a prophet (Luke 7:39), let alone the Messiah, all because he lived a human life welcoming and identifying with sinners.

When John was baptizing sinners to prepare the people for the coming of the Messiah, the Messiah appeared and allowed himself to be baptized (Luke 3:21), even though he was not a sinner.

So that we can identify and relate better with Jesus, the human nature he assumed must be apparent to our human hearts. His humanness should resonate in our humanness. He must be the friend, the senior brother, the father we so desire, for that is exactly who he is. He was flesh and blood, he came to life as all human beings do, he grew up among flesh and blood. The community of peasant farmers and fishermen in which he grew up would later influence his ministry, just as the human development of every child is influenced by childhood environment and playmates.

Thus, it seems to me that it would be easier to relate to a pontiff who mirrors Jesus the suffering servant, the master-servant who washes the feet of his brothers, the Christ who endured his passion, much more than to a pope with the trappings of the "heavenly high priest."

May Jesus, son of a carpenter and Son of God, illumine our hearts and the heart of the entire universe.