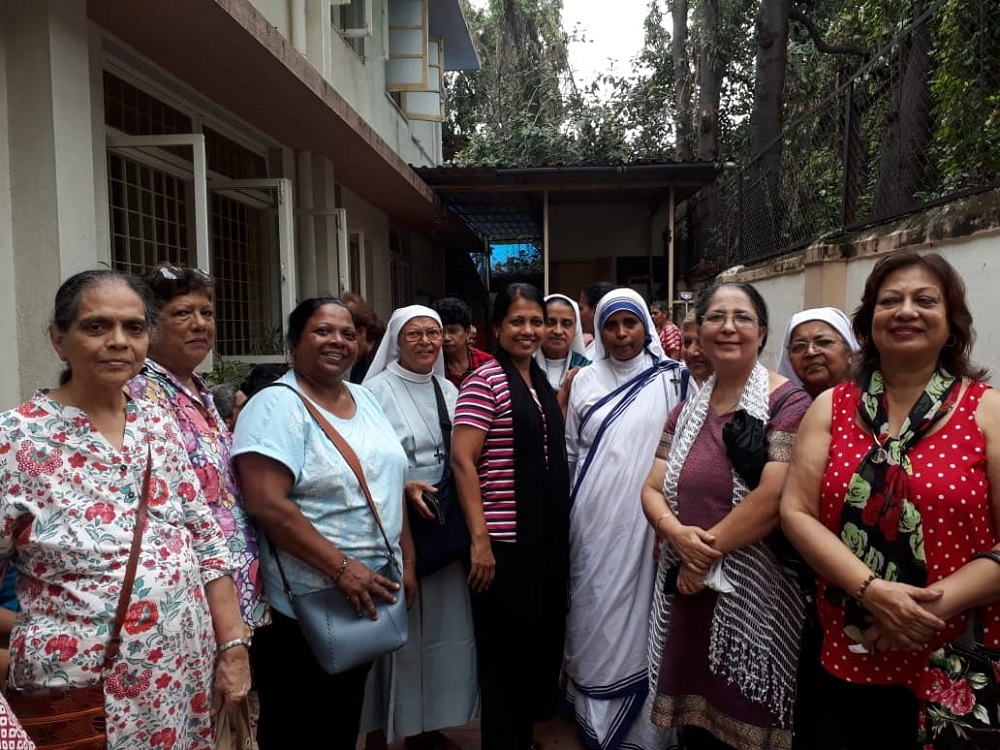 The Bethany Lay Associates visit a destitute home in Mumbai in 2020, before the onslaught of COVID-19. (Courtesy of the Bethany Sisters)

Clara D'Cunha is married with two children, and yet she manages a convent in Mangaluru, a southern Indian city.

The Mangaluru-based Bethany congregation shifted its nuns from the beachside Good Shepherd Convent at Ullal to rural centers before handing over the convent and its campus to D'Cunha in 2012.

The 45-year-old Catholic woman has repurposed the convent to cater to recovering women alcoholics, so far serving more than 300 of them. She is a member of the Bethany Lay Associates that the Mangaluru-based Congregation of the Sisters of the Little Flower of Bethany, or just Bethany Sisters, started in order to encourage lay collaboration.

Lay associates now outnumber the sisters in the congregation. 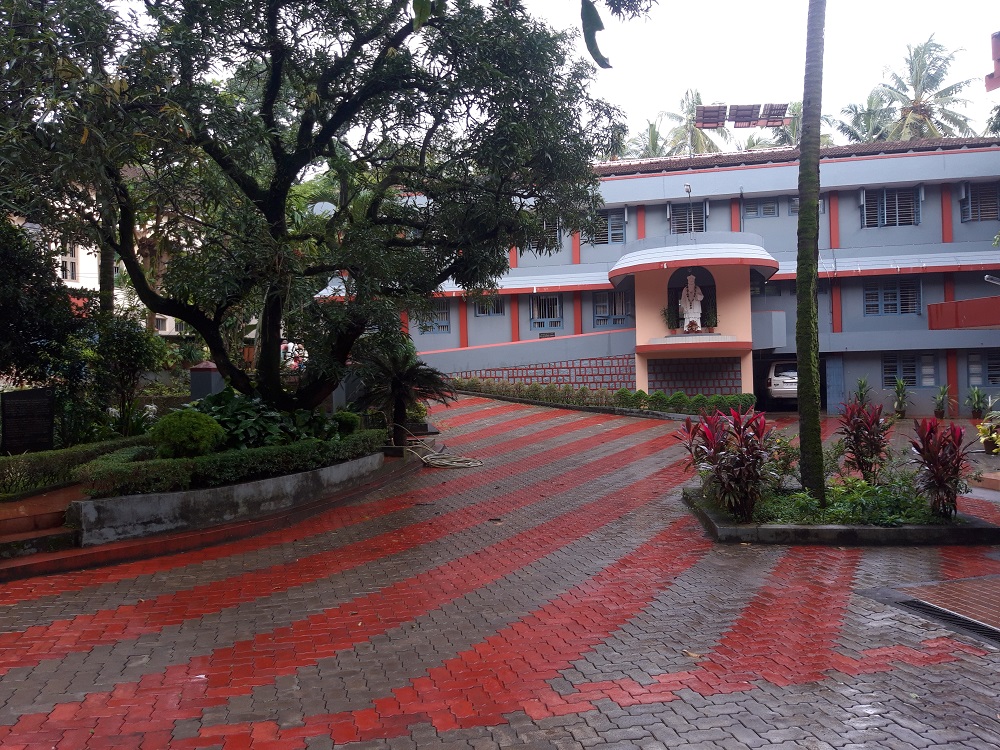 The headquarters of the Bethany Sisters, a congregation based in the southern Indian city of Mangaluru (Thomas Scaria)

"Today, most congregations are facing a slump in religious vocations and the lay associates can fill the gap as a special vocation," said Sr. Rose Celine Fernandes, superior general of the congregation that is celebrating its centennial this year.

The associates are "a growing sign of big hope for us" as "they strengthen our presence in society remarkably," said Fernandes, who is also the lay association's president.

The congregation proposed the lay association during its general assembly in 2004 and launched it at its 2009 assembly.

"It was in response to the Vatican call for involving laity in church ministries. However, our vision became a structured program only in the last decade," said Sr. Shanthi Priya, who coordinates the congregation's pastoral ministries.

The congregation has also launched the "Bethany Champions" for teenagers, "Bethany Blossoms" for those in grades three to six and "Bethany Buds" for children in kindergarten to second grade. "This is to ensure the continuity of our collaboration with the laity," Priya said. 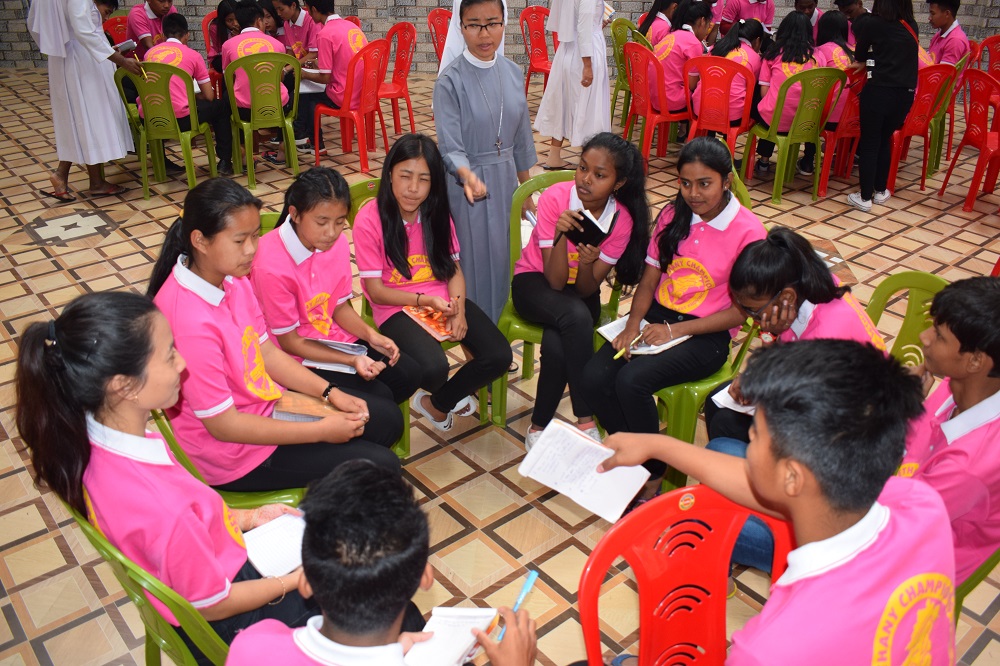 The congregation now has 1,599 lay associates in 100 units spread over seven provinces in India and two delegations in Germany and Senegal. The congregation, on the other hand, has 1,410 members in 186 convents in India and one house each in Africa, France, Germany, Italy, Nepal, Senegal and the Vatican.

Fernandes said their congregation was started with four women on July 16, 1921, by Servant of God Raymond Francis Camillus Mascarenhas, who was then the parish priest of St. Sebastian's Church, Bendur, in the Mangalore Diocese.

The Bethany nuns have taken "a step ahead" by encouraging laity collaboration in their mission, said Fr. Faustine Lucas Lobo of the Mangalore Diocese. 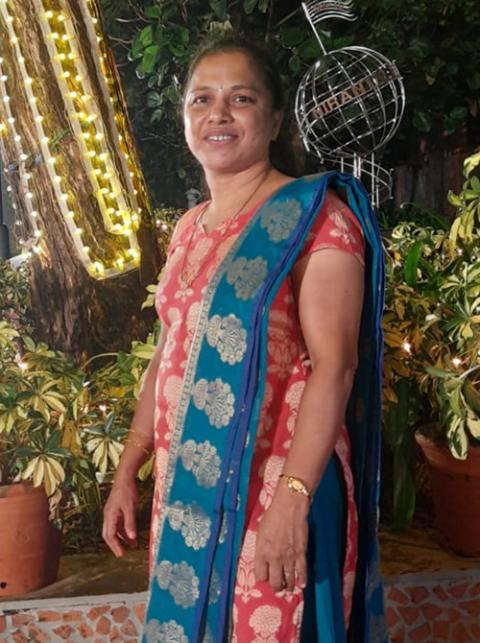 Clara D'Cunha, a Bethany lay associate since 2009, took over a century-old convent from the Bethany Sisters, a congregation based in Mangaluru, to run a rehabilitation program for women suffering from alcoholism. (Courtesy of Clara D'Cunha)

"The congregation was founded to assist socio-pastoral mission in rural parishes and this is happening more effectively through the religious-laity collaboration," Lobo, who helps the nuns in training the laity, told GSR.

He said the Bethany nuns now form leaders with Gospel values to act as yeast in India's multi-religious context. The future of the church, he said, lies with such laypeople.

D'Cunha is among those giving hope for a new church. She became an associate in 2009, and the Bethany nuns allotted her their Good Shepherd Convent, a donated beachfront building in Mangaluru, also known as Mangalore.

She renamed the now rehab center Tender Loving Care, the fulfillment of a 10-year dream, with help from a Dutch donor, that started when she was still a rehab counselor for women addicts at a diocesan hospital.

"I believe it was certainly a divine call to become a Bethany lay associate and serve humanity more meaningfully," D'Cunha told GSR. "Bethany sisters were part of my childhood as I lived next to their convent in my village, Ajekar. I was always inspired by their lifestyle and mission."

A Bethany nun who had fought addiction in society throughout her life had encouraged D'Cunha to take up the convent.

"Entrusting one of our convents to a lay associate member symbolized a transition in our strategies and trust in the laypeople, which was in line with our founder's spirit," Priya said. 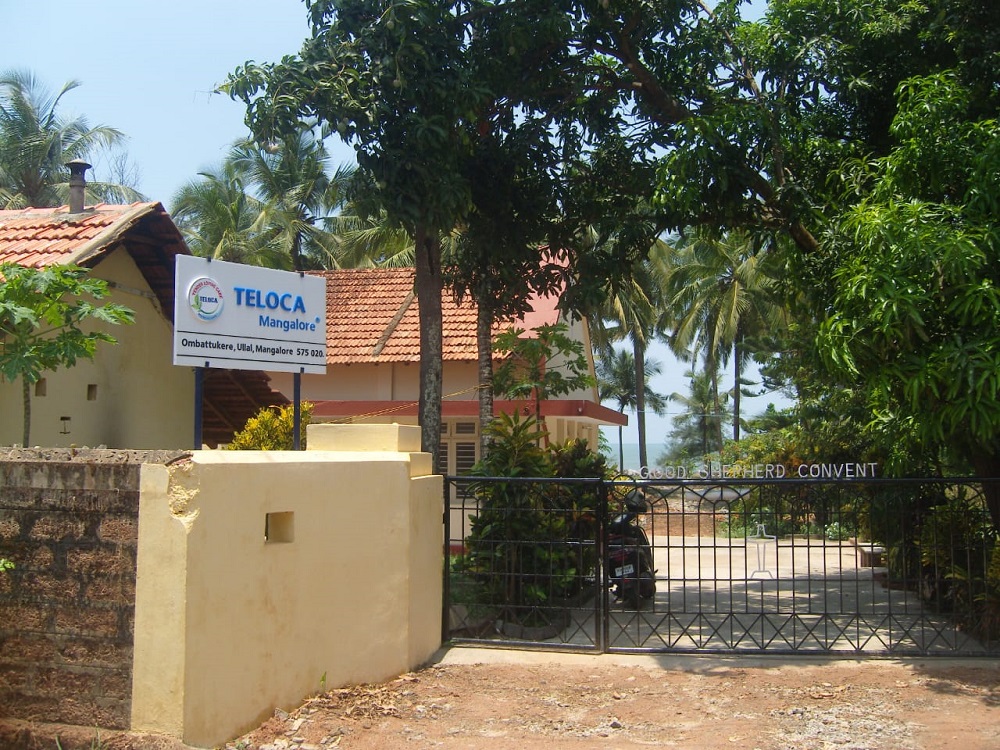 Good Shepherd Convent of the Bethany Sisters has been converted to the Tender Loving Care rehab center for women alcoholics, TELOCA for short, by Clara D'Cunha, a member of the Bethany Lay Associates. D'Cunha had been a therapist in alcohol rehabilitation at a diocesan hospital when she got the offer to take over the Bethany Sisters convent. Her decision to use the convent for treating women alcoholics, with support from a Dutch donor, fulfilled a 10-year dream of hers. (Thomas Scaria)

"Laypeople have a great potential to continue our mission and we involve them at socio-pastoral and spiritual ministries at all levels," Priya told GSR. The associates, she added, have "doubled our reachability and missions."

Sr. Jyoti Pinto, former superior general during whose tenure the convent was given to D'Cunha, said they had used the place as a holiday home and a picnic spot for their members.

"We had to use the place for a better cause," Pinto told GSR. "Most of our younger sisters were already serving in rural areas."

Pinto said they are pleased to reach 100 units of the associates in the centennial year. The units of 10 to 20 members each are attached to convents.

Fernandes said their nuns work for women's empowerment and serve those on the peripheries. They also join movements against human trafficking and work for safe migration, rural development, health and education, besides assisting in parishes. 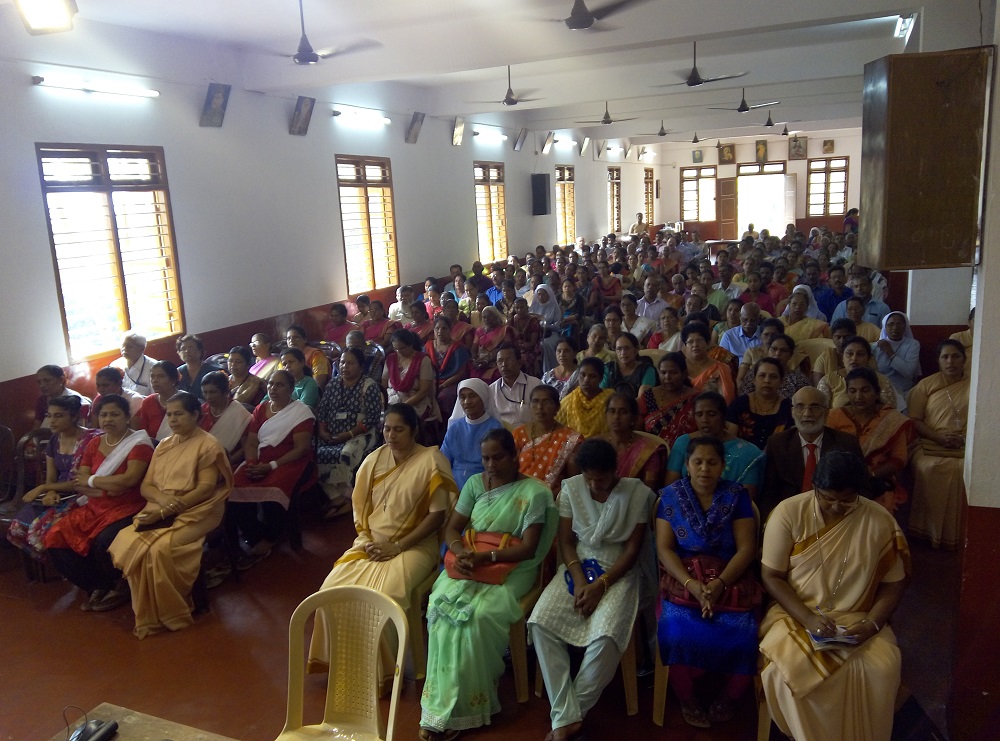 The Bethany Lay Associates in Mangaluru celebrate Family Day with associates' families in July 2020. (Courtesy of the Bethany Sisters)

D'Cunha said some associates work with the nuns in their missions while people like her manage independent centers.

"We do not look like the Bethany sisters or dress like them, but imbibe the same spirituality. We exercise dual roles in society as laypeople and Bethany associates," D'Cunha said.

Alice Lobo, another associate attached to Santa Cruz Convent in Kulshekar, Mangaluru, said she finds "real joy" in spending a day every month with the nuns, learning and experiencing the Bethany spirituality.

Lobo and her husband, Richard, became associates in 2009 and renew their commitment every year.

"We are engaged in various ministries of the Bethany congregation. We have also involved our children whenever we visit orphanages or get involved in social apostolates," Lobo told GSR.

Theresa Rosie Andrade, 69, joined the association in 2007. She said she and her husband, Paul, drew inspiration from the Bethany Lay Associates to become missionaries and evangelists.

"We have not only adapted the Bethany spirituality in our home, but reach out to several families with the good news," the Andrade couple, who spend their retired life in faith formation, told GSR.

Selva Chinnappa, an associate in North Karnataka, said he was inspired by the simplicity and spirituality of the congregation's founder.

"Since I became a member of the Bethany family, I have set apart a particular amount of my earnings every month for charity," Chinnappa told GSR.

The associates attend regular monthly unit meetings at their designated convent. The program includes prayer service, Bible class and topical discussions. They also decide on the activities for the month. 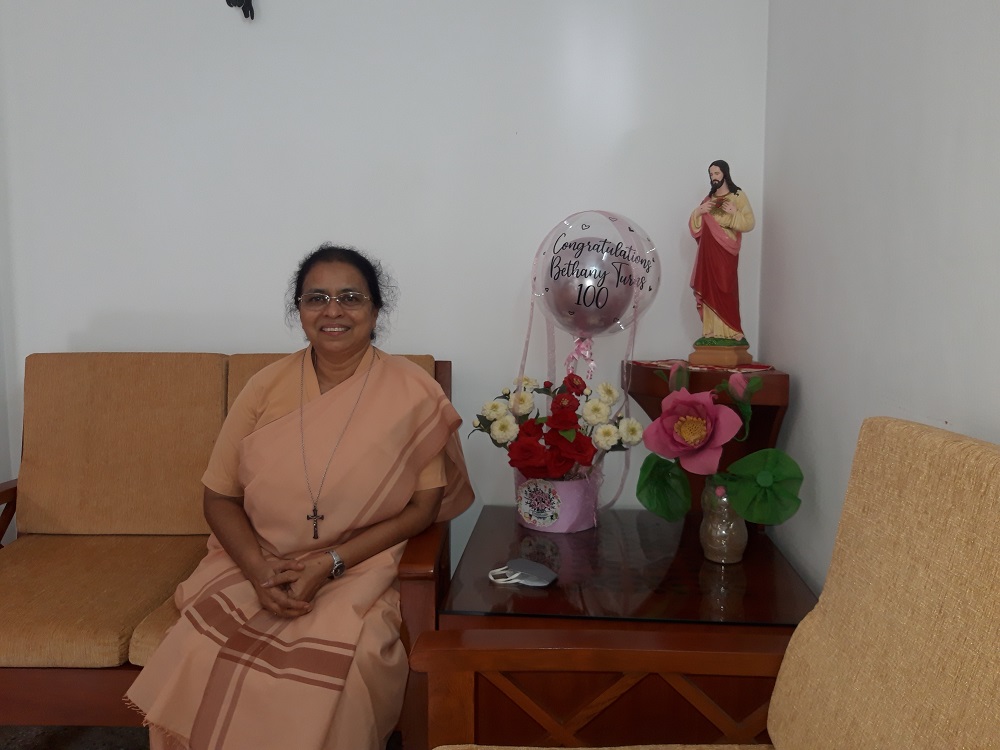 Sr. Shanthi Priya is coordinator of the Bethany Lay Associates, shown here at the headquarters of her congregation in Bendur, Mangaluru, southern India. (Thomas Scaria)

Priya said at the initiation ceremony, each member is given a handbook that explains about meetings, formation, activities, and the membership patterns.

Those who volunteer to become associates have to first register at a local Bethany community. They then undergo a year of training in Bethany spirituality and mission before officially becoming an associate.

After the formation, the members make their "commitment" during Mass offered by the parish priest where they get a badge and a crucifix in a special ceremony. The superior of the local convent also attends the program.

Pinto observes that most associates have become old now. So, the "Bethany Champions" program aims to nurture young people in the Bethany spirituality and prepare them to assume leadership in society.

"We form young Catholics as future leaders," Pinto said. The Champions is a "formation program, whereas lay associates accompany us in our missions." 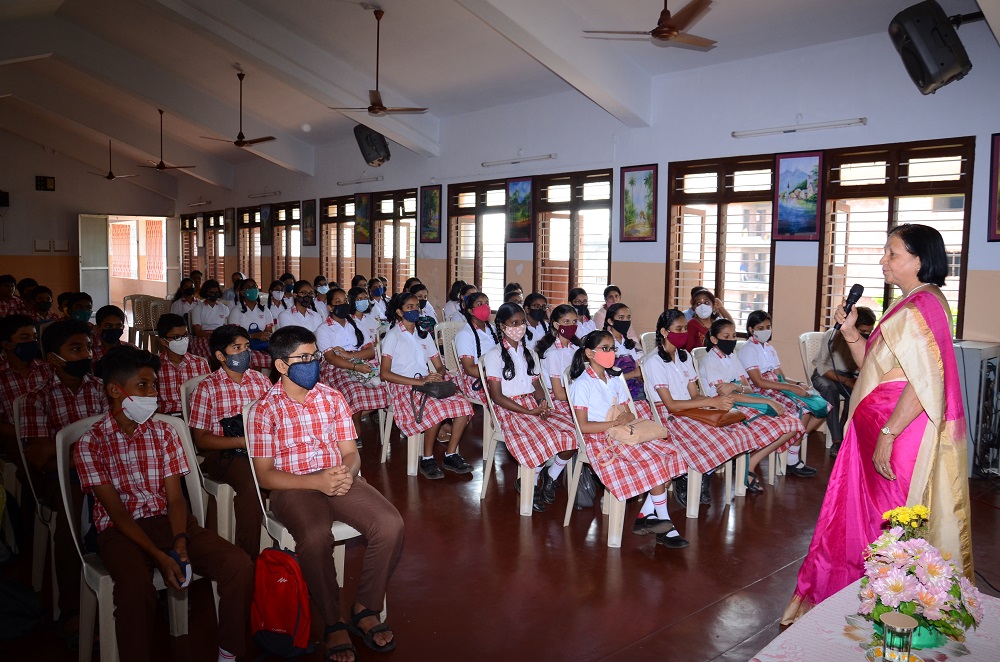 "But we already have more than 3,000 active Champions," she told GSR.

While the lay associates collaborate in the Bethany missions, the Champions join formation programs to prepare for leadership, Crasta said.

The Champions are ages 12 to 18. The congregation selects Christian students in grades seven to 12 and helps them complete studies and assume social leadership, Crasta said.

The superior general said their inspiration to work with children came from their founder, who believed in forming children as champions in society by instilling in them faith and leadership qualities. 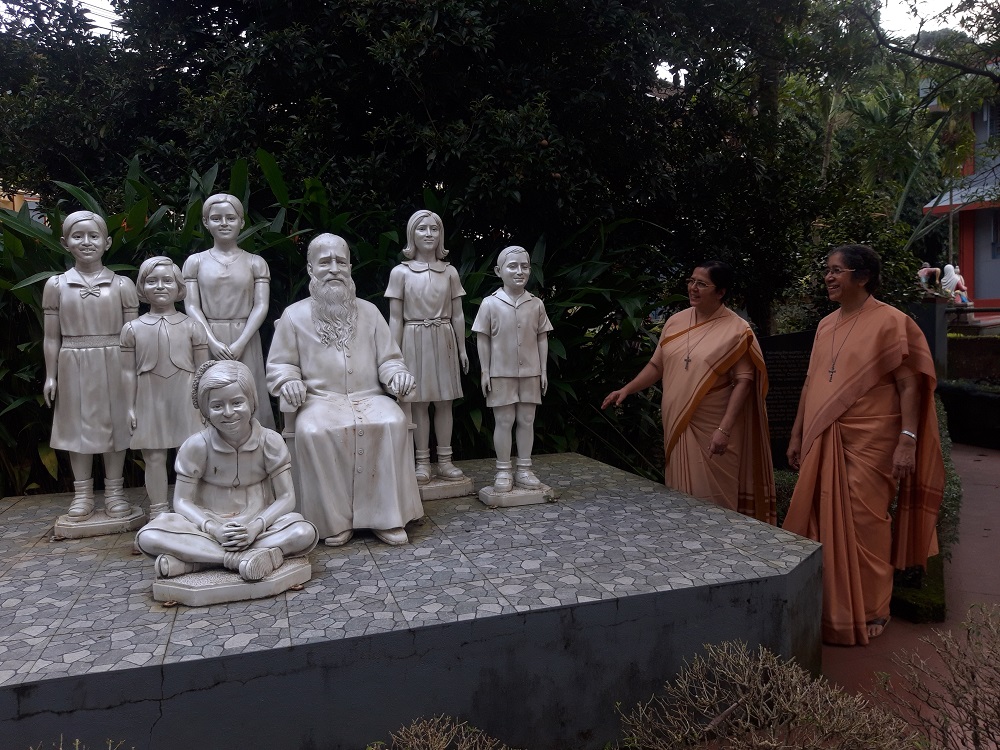 Sr. Mariette Crasta, the coordinator of the Bethany Champions, left, with her superior general, Sr. Rose Celine Fernandes, near the sculptures of their founder and boarding school girls who later became Bethany Sisters. (Thomas Scaria)

Shontelle D'Souza, who became a Bethany Champion in 2015, said her aim is to bring positive changes in society based on the Gospel values.

"We are trained to play leading roles in the church as well as in civil society," said the student with a master's degree in business administration.

D'Souza said her outlook on life changed after attending the Champions' national convention in 2015, where "I was able to interact with around 300 youths from over 50 dioceses in India."

Pinto said working with laypeople, especially youth, has brought hope to them. "We have become more visible, participatory and effective in social and pastoral apostolates with their participation," she said.

Fernandes said the church's future lies in the laity. "It is our duty to strengthen the laity to play their roles in the church and society with a structured program," the superior general added.

[Thomas Scaria is a senior journalist based in India who has written for the Union of Catholic Asian News since 1991. He also writes for Matters India, a news portal that focuses on religious and social issues.]