1 Our cluster on the bus CROP.jpg 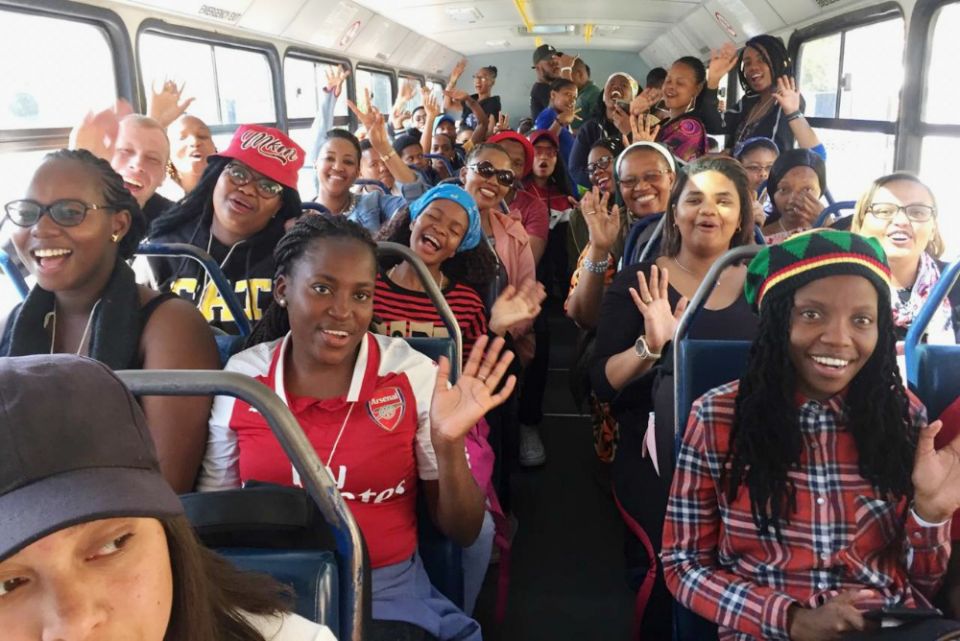 The Pinelands Cluster A3 group on the bus, on the way to their host churches’ prayer and activities during the Taizé Pilgrimage of Trust in Rondebosch, Cape Town, South Africa (Letta Mosue)

Leaders of Anglican, Catholic, Methodist, United Reformed and Presbyterian churches invited the Taizé Community in France to host the Taizé Pilgrimage of Trust in Cape Town, South Africa, Sept. 25-29, 2019. It was organized for youth and young adults, 18-35 years old.

But it was a wonderful personal experience for me, too!

Some brothers from the French Taizé community spent two years in South Africa preparing for this pilgrimage, which could not have come at a more appropriate time. At the beginning of September, there was a high rate of gender-based violence and xenophobic attacks in Gauteng province. I was attending a meeting in another province and have no idea what really triggered these events, but social media was full of the stories. The International Union of Superiors General Constellation 6, of which I am the chairperson, met Sept. 6-8 and issued a statement condemning the attacks, as did the Southern African Catholic Bishops' Conference's Justice and Peace Commission.

But the people of Cape Town went ahead and welcomed strangers, and I was filled with great gratitude. Not only did they trust strangers from various countries of Africa, Europe, North and South America, and Australasia to come to their city, but into their homes as well. However, some members of groups from various African countries canceled their trips, because not everybody trusted the situation in South Africa.

This event was a collaborative effort of various faiths and denominations. I accompanied seven young people from the Rustenburg Diocese (North West province) to Cape Town (Western Cape province). I thought I was going to have 15, but some lacked the money for travel. The seven in my group had never been on an airplane, so they were really excited!

The parish chairperson and one parishioner had organized our round-trip transportation, but we had to travel a day early. I worried about where we were going to spend the night since we were getting there in the evening, a day early. But thanks to Brother Luc and the Pinelands Cluster (our host) we were picked up at the airport by two members of the Anglican Church, Cindy and John, and delivered to our host families. 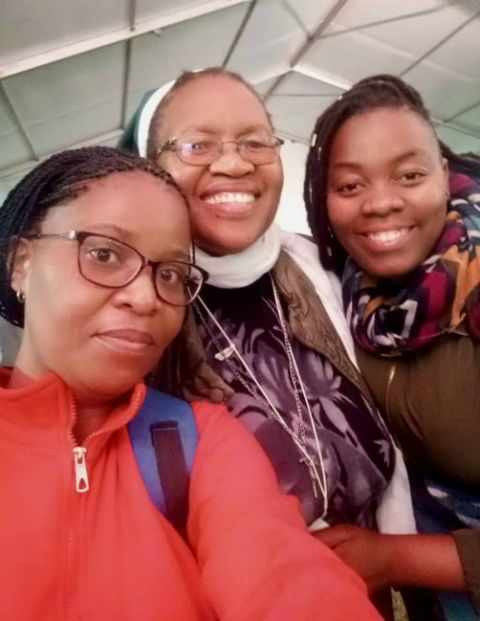 My group was divided into sets of two and went to stay with different host families. All eight of us had a genuinely warm welcome! When we met the next day, we shared about our host families. Two of our young men told me they were staying in an old age home. Thato and I stayed with a lady in her 70s and her youngest daughter, who were also hosting two young men from KwaZulu/Natal.

Our host group, the Pinelands Cluster, was made up of five churches: Anglican, Methodist, Presbyterian, Dutch Reformed and Catholic. My group and the two young men from KwaZulu/Natal were taken to the Anglican church the morning of Sept. 25 where we registered, toured the church, and had snacks and a cup of tea before our ride to the Cape Town suburb of Rondebosch.

The cluster had prepared box lunches for us; since we were the first group to arrive, they forgot to give us our lunches so we were called back to pick them up. That gesture touched me deeply. The rest of the visitors for Pineland Clusters arrived in the evening and got their packed lunches then. Inside there was a sandwich roll, a muffin, juice and fruit. We felt very special.

Every morning, our host families brought our cluster group members to the host site at the Anglican church, then we walked across to the Methodist church for Taizé morning prayers. Afterward, we traveled by bus to Rondebosch, where St. Joseph's Marist College is located, for the day's activities.

More than 4,000 youth and young adults, their adult co-ordinators and other visitors assembled for the main program every day in a huge tent for Taizé prayers, after eating our lunches outside. Afterward, we would choose one of nine topics and go to a small tent or building where that theme was discussed.

On Sept. 26, I attended a talk at the Anglican church on challenges young people face in trying to find employment. On Sept. 27, a recovered drug addict told us her story at the Dutch Reformed church. On Sept. 28, an animal expert brought to the Methodist church some of the wildlife she had rescued, to encourage us to care for wildlife. Two of the ladies were afraid of snakes, but one finally did touch a snake, amid encouragement and laughter.

Among these topics/themes were "Listening to God," "Jesus Christ's invitation," "Meeting and serving Christ in the excluded and the forgotten," by the Missionaries of Charity, and a celebration of trust and reconciliation in which various African countries and regions sang and danced.

Then supper, evening prayers in the big tent, and a bus trip back to our host churches. Our group was always picked up last, but we would sing in various languages and dance together while waiting for the bus to arrive. There was such a spirit of community and joy that the waiting in the cold did not seem to matter.

Some members of our Pinelands Cluster A3 wait for the bus to pick us up to take us to Rondebosch, Cape Town, where the Taizé Pilgrimage of Trust took place in September 2019. We experienced Jesus' saying, "The first will be the last and the last first," as we were the nearest to the venue but always the last to be picked up. (Provided video)

Catholic Archbishop Stephen Brislin welcomed us the first day and Anglican Archbishop Thabo Makgoba closed the event on the last day of the gathering. Other faith leaders also attended on various days. On the last day, we attended church services with our host families, and after lunch the families took us to the bus for our return journey.

What a moment of grace for South Africa and all the participants who — despite the violence that took place at the beginning of that month — beat the odds and came! If there is any method of bringing people of different cultures, races and denominations together for a common purpose, Taizé's Pilgrimage of Trust was the best. Friendships were begun, and still continue through our WhatsApp connections.

I was touched when one of the host coordinators, Cindy, remarked that she could see my group was well-prepared. Indeed they were! Since the second week of August, they had been meeting every Sunday after the parish Mass for Taizé preparatory prayers in our chapel. If I was not present, Sister Monica accompanied them in prayer.

On our return from Cape Town, they traveled around to the three parishes of the Rustenburg Diocese that they represented. A co-ordinator of religious instruction in Catholic schools of the North West province invited them for a meeting. He wanted them to start introducing Taizé prayers into the schools next year.

They arranged a retreat for Nov. 23, 2019, inviting other youth and adults to join them. On Sunday, Dec. 1, they came to the convent after Mass for Taizé prayers. This amazing group probably will begin introducing Taizé prayer in schools in 2020. I am so proud of them, and so glad I had a chance to share this experience with them. May it bring peace and justice to our corner of the world!

[Letta Mosue is a member of the Congregation of St. Brigid in the Rustenburg Diocese, South Africa. An educator, clinical psychologist and specialist in trauma counseling, she is in private practice while serving as superior general of her congregation.]

The Face of God's Mercy at Santo Niño

Ten reasons to be a Good Shepherd Volunteer

Preaching truth today: What does it require?