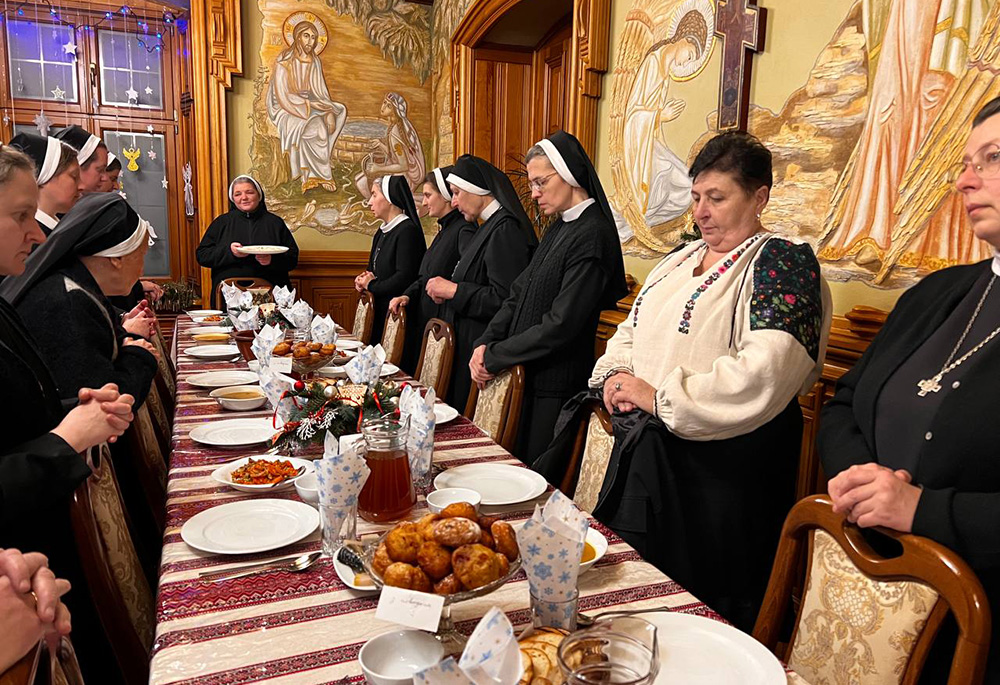 The Basilian sisters community in Ukraine is pictured at the beginning of "Holy Eve," the evening before Christmas, after a day of fasting until dinner. Here the superior gives Christmas greetings to the sisters. (Courtesy of Yeremiya Steblyna)

We are used to celebrating Christmas. We know when to put up the Christmas tree, when to decorate the house with festive garlands and when to bake stollen or Ukrainian pampushky (doughnuts). We know what, when and where to buy what we need. We look for gifts at promotional prices and study the schedules for the religious services and holiday concerts in our cities and villages. After all, Christmas is a time to get together. We may not see our relatives for a long time, but at Christmas our houses are filled with voices. Everyone comes home.

But this Christmas was not typical at all in Ukraine.

A few days before Christmas, my good friend, whose son is in the war, sent me a message that Yurko went to battle on Dec. 28 and has not been in touch since. He is officially considered missing. Yurko is 22 years old, loves punk rock and even sings carols in this style. He has extremely kind eyes and a bright smile. His three younger sisters are waiting for him to come home. The youngest is 5 years old. He went to this war because he knew who and what he was fighting for.

This message pierced my heart painfully. I was mentally and prayerfully with his parents, my good friends, in spirit. I asked God for them to have strength to bear it since they are completely exhausted from waiting for any news. How many more similar stories are there in Ukraine today? Perhaps some will never sit down at the table with their family on Christmas Eve again.

Suddenly my preparations for Christmas were overshadowed by pain and thoughts of Yurko. I carried him always in my thoughts and prayer, and the pain was always with me. I am very grateful to live in a large community. The community heals, helps and even relieves a bit of the pain. There was a lot of work to do before Christmas and it helped to distract me a bit.

In Ukraine, we call the evening before Christmas "Holy Eve." This day is a strict fast until dinner in the Eastern Christian Church. There are a lot of liturgical prayers. Fasting and prayer prepare our hearts for the arrival of the newborn Savior. 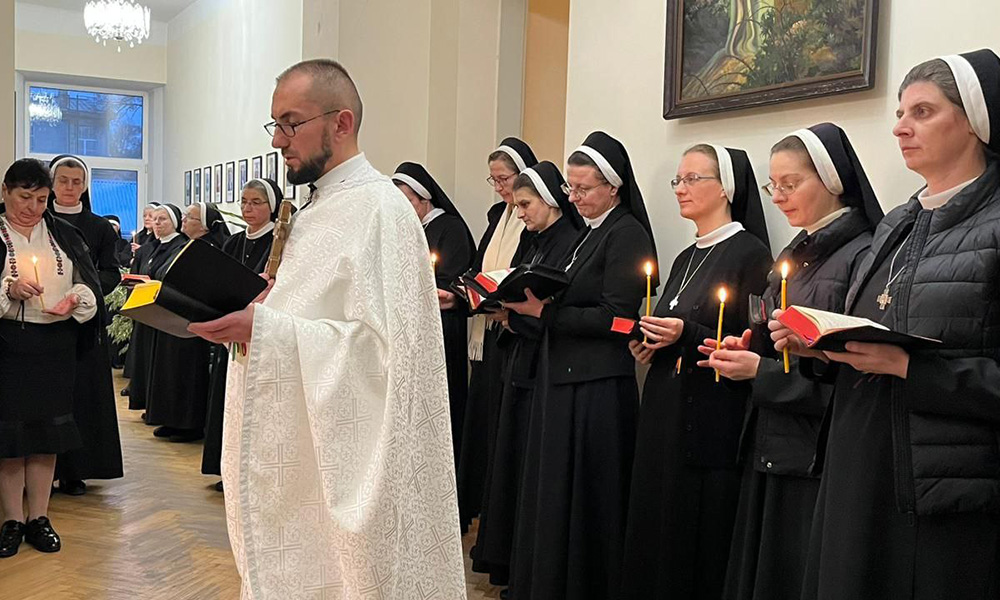 Traditionally, 12 dishes are prepared for supper. Among them are some purely Ukrainian ones, such as borscht, pampushki, kutia, varenyky, holubtsi and uzvar. Each sister in the monastery cooks a different dish. Some set the table for the meal, and some decorate the Christmas tree in the chapel or the living room.

Before sitting down together for a common meal, we start our prayer with "God Eternal," a traditional song in honor of the newborn Savior. Afterwards, the superior distributes the prosphora (unleavened bread) sprinkled with honey. She approaches each sister with wishes for a blessed Christmas. This is a very touching moment. I realized at this moment that God has given me another year of life and is born for me again, inviting me to the next one. I also understood that this Christmas some are already sharing this meal and joy of the eternal meeting with him in heaven. These people are most likely in military uniform. I subconsciously catch myself thinking that Yurko might be there too.

During Holy Eve, my sisters and I sing a lot of carols. Each of us names the carol she likes. After the Christmas caroling we wish everyone a blessed Nativity. This year, some of these wishes were a little humorous: that there should be light, electricity as well as generators. Many wishes included victory in the war and peace for Ukraine. These verses, which we call "vinchuvannaiya" — best wishes — reflect the aspirations of the people, their dreams and their faith in goodness.

During the Christmas season in Ukraine, there is a long-standing tradition of having small performances about the birth of the Savior in people's homes. We call them "vertep" (a Nativity scene). Most often, the nativity scenes are done by children and young people. Various characters are present in them: Mary, Joseph, angels, shepherds, and kings, but there can also be Herod, Death, and the devil, as the personification of evil.

This play is always about the victory of good over evil. This year, several of these "Nativity scenes" came to our monastery. And, interestingly, everyone covered the topic of the war in Ukraine. According to the plot, in one of them, Joseph and Mary are refugees and return to Bakhmut, because they are waiting for the birth of the Child. It is there, in the place of the greatest pain and suffering, in the trenches in the middle of the war, that Jesus is born and brings his light. The Holy Family is accompanied by volunteers and soldiers. They are modern angels. And their hands are strong wings with which God protects life. 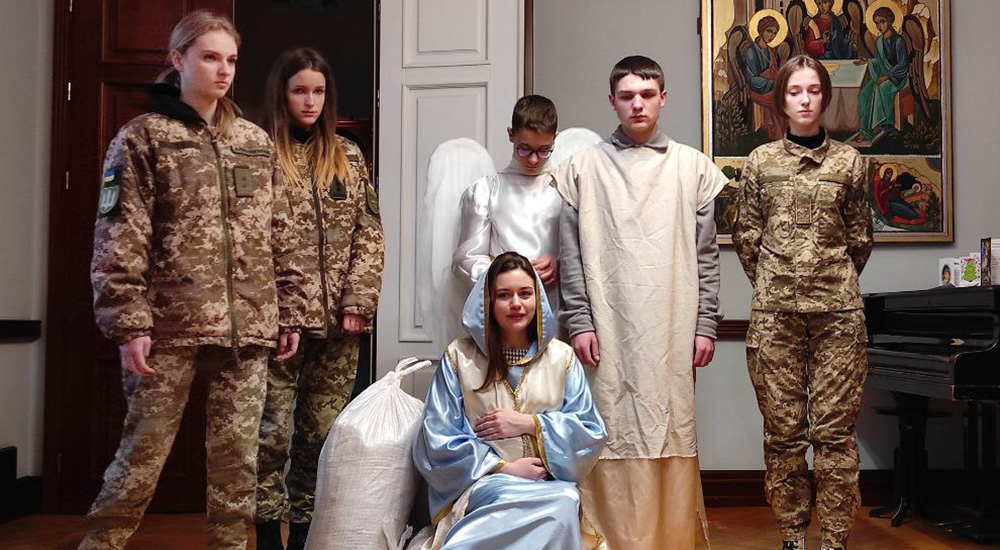 In Ukraine, a Christmas tradition involves young people performing Nativity scenes in people's homes. In this performance at the Basilian sisters' monastery, young people portray Joseph and Mary as refugees returning to Bakhmut for Jesus' birth; they are accompanied by volunteers and soldiers. Many Nativity scenes came to the monastery, and all of them covered the war. (Courtesy of Yeremiya Steblyna)

Another group of young people showed suffering in Ukraine coming to God's son in Bethlehem. In this performance, the struggle between good and evil was recreated with the help of dances to the rock version of "Schedryk." And instead of carols, songs about the war and the unity of Ukraine were sung.

It was difficult to hold back tears during these performances: on the one hand, from the pain and awareness of the path that Ukraine is taking, and on the other hand, there were tears in the understanding of what kind of generation is growing up in Ukraine. This is not a hurt, broken, or defeated generation. These are young people with values and the slogan "God and Ukraine."

The holidays pass quickly. In the East and South of Ukraine, the tanks and artillery calm down, then again violently roar. From time to time, rockets fall on civilians. Our angels flew to God (died) every day at Christmas. These were men and women with hands calloused from weapons, volunteers with clear eyes and a pro-Ukrainian position, and whole families who fell into land mines. There are hundreds and thousands of them. And that's why this Christmas is unusual. It was marked by life and death, as it was in Bethlehem 2,000 years ago. And it is so deep at the same time. Because all of us in Ukraine understand what life is and what it means to preserve it.

President Volodymyr Zelenskyy, congratulating Ukrainians on Christmas, reminded us that "we are not righteous, not saints, but we definitely compete for good and fight for the light."

On Holy Eve, before sitting down at our common table, we look for the first star in the sky. President Zelenskyy said: "Someone will see the first star in the sky over Bakhmut, Rubizhny, and Kreminna today. Along thousands of kilometers of the front line. Someone is on the highway, on the way from the Ukrainian-Polish border to the Kherson region or Zaporizhzhia. Someone will see her through the holes in the bullet-mutilated roof of her own home."

Christmas always starts with a twinkle of a little star. If we see it, there is hope that victory will come soon!