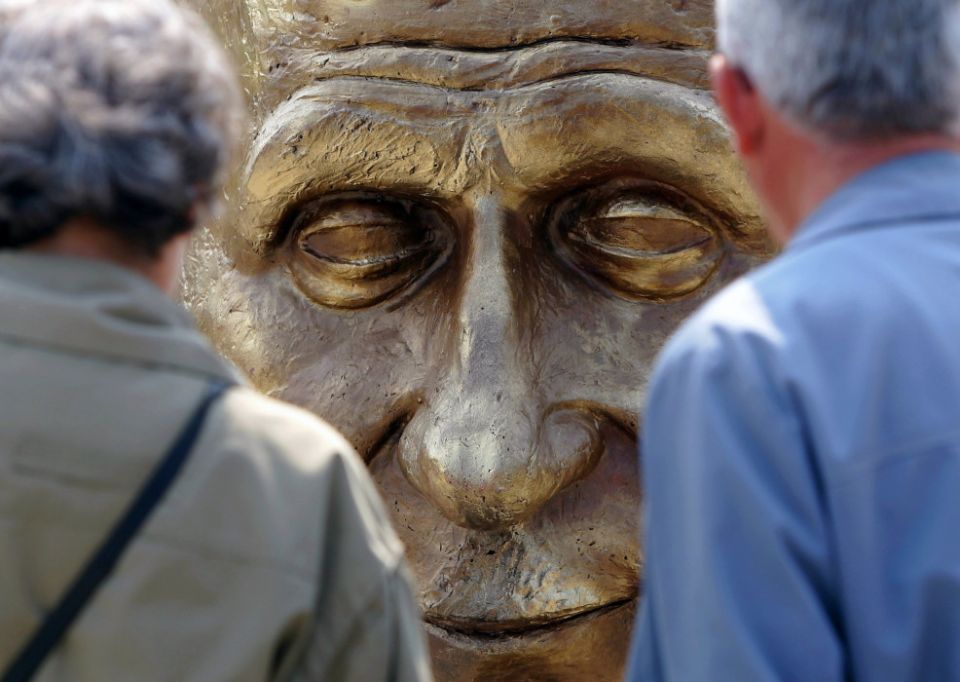 People look at a sculpture of Robert Schuman, France's former foreign minister, at a park in Bucharest, Romania, in this May 9, 2006, file photo. Pope Francis has advanced the sainthood cause of Schuman, who helped lay the groundwork for the European Union. (CNS/Reuters/Bogdan Cristel)

Vatican City — Pope Francis recognized the martyrdom of 10 nuns who were brutally murdered by Soviet soldiers in Poland at the end of World War II and declared venerable Robert Schuman, who is considered one of the founding fathers of European unity.

The pope signed the decrees during a meeting June 19 with Cardinal Marcello Semeraro, prefect of the Congregation for Saints' Causes.

Recognizing the martyrdom of the 10 religious women, members of the Sisters of St. Elizabeth, clears the way for their beatification. Nine of the 10 were born in Poland.

According to Vatican News, Sr. Paschalina Jahn and the other sisters were killed between February and March in 1945 at different locations where they were assisting the sick and the elderly. Most of the sisters were raped before they were shot.

Poland's Institute of National Remembrance — an organization dedicated to investigating war crimes committed between 1917 until 1990 — announced in March the discovery of the remains of three more nuns murdered by Red Army soldiers.

While the sisters' cause moves toward beatification, the cause of Schuman is still in its early stages with the recognition that he heroically lived the Christian virtues. A Christian Democrat politician who twice served as prime minister of France, he promoted the post-World War II policies that led to the formation of the Council of Europe and eventually the European Union. He was born in 1886 and died in 1963.

The other decrees approved by Pope Francis recognized: