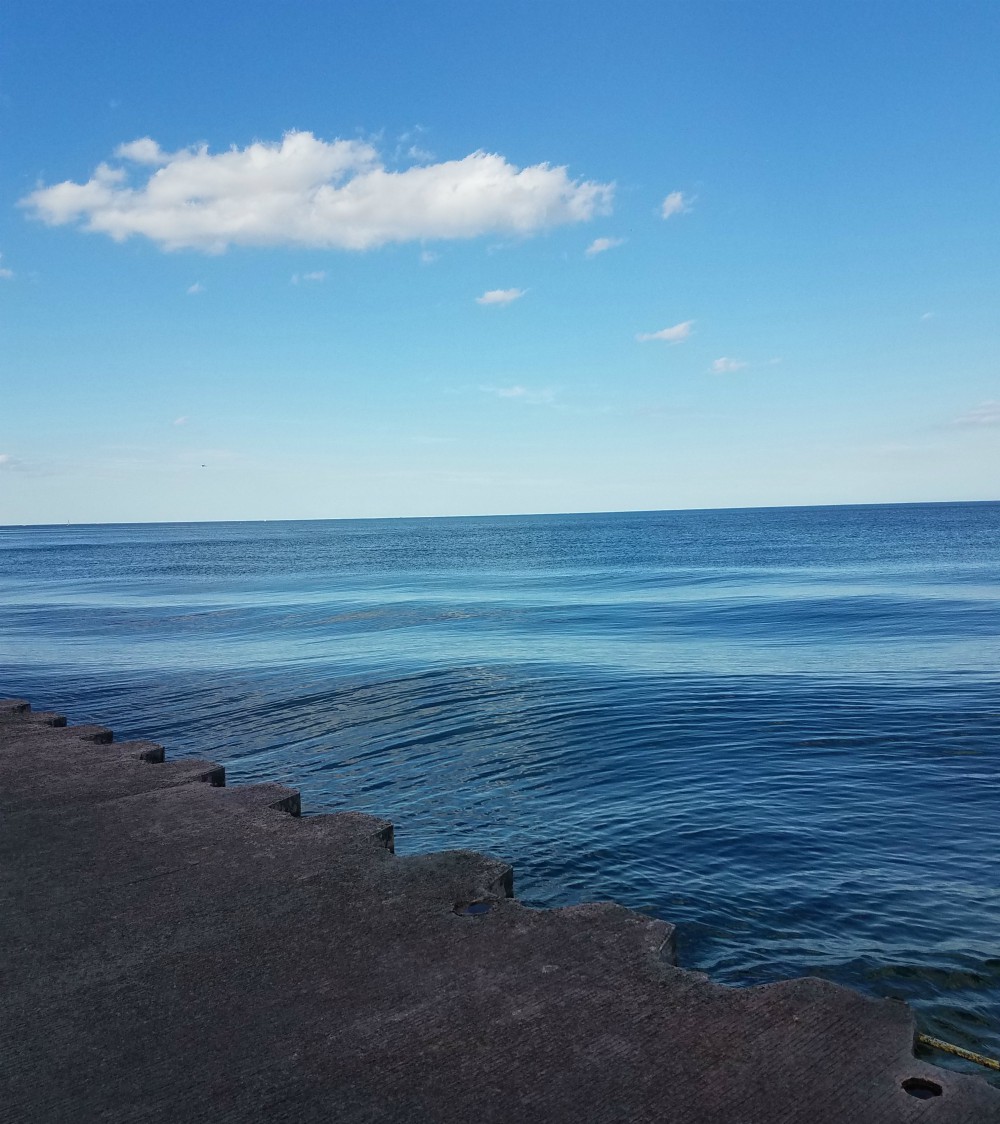 One of the places where Sr. Julia Walsh likes to pray on the shore of Lake Michigan in Chicago (Courtesy of Julia Walsh)

At my new home in Chicago, I can visit the shore of Lake Michigan, and I like to go there to pray. From my spot on a concrete slab, all that is visible to me that is "natural" is water and sky. Everything else — the concrete, the fence, the shoreline — has been constructed by humans, not God. Humans inflict change on everything they encounter. Watching the water roll around the boulders at my feet, I realize my creaturedom carries a contradiction: No matter my will, my body is always impactful; with my smallness comes a might. I have effects on landscapes and other creatures just through my being and my breath.

Later, I go to Mass, tucked into a chapel around a table I equate with love, mercy and transformation. It's a truly Catholic community. We're sisters, priests, and married and single people with many shades of skin. Some are from nations I'll never really know (South Korea, Ireland, Zambia). A woman's voice proclaims the Psalm:

Let this be written for the generation to come,
and let his future creatures praise the LORD:
"The LORD looked down from his holy height,
from heaven he beheld the earth,
To hear the groaning of the prisoners,
to release those doomed to die."

Today, it doesn't take much effort to hear the groaning of other creatures.

People are suffering. People are dying. Entire ecosystems are collapsing. We are in the beginning of a mass extinction, and all you can talk about is money and fairy tales of eternal economic growth. How dare you! ... This is all wrong!
—Greta Thunberg

When Greta Thunberg's prophetic voice echoed through the United Nations' halls and went viral online, I called Sister Lucy, an ecologist, farmer and educator and, like me, a Franciscan Sister of Perpetual Adoration. Sister Lucy and I bemoaned the state of the planet, our voices united across the miles, our cellphones pressed to our ears. She told me she heard that at the rate we're dumping carbon, the Earth will only be able to support 1.2 billion people in 2030. I said that with the circumstances, it is no wonder there's a migrant crisis and extreme polarization; people are afraid and acting from their fear.

Together, we talk about how close 2030 is. We agree that our vocation insists we radically love those who are most vulnerable, that we tend to the hurting people and planet. And we agree that the circumstances demand we all must repent and convert. We must radically change our ways.

We wonder: Could our Franciscan values save us?

Today, Oct. 4, is the feast of St. Francis of Assisi (1181-1226). St. Francis was a man who was in touch with the wounds of his time and whose life made a countercultural statement. As a son of a cloth merchant, he grew up as part of the emerging middle class; comfort and pleasure were ordinary for him, and he could choose to avoid poverty and struggle. He became a knight and was captured during a war with a neighboring city, and this caused him to rethink his life.

Eventually, the people he once despised, lepers — who were the most marginalized people in his society — became beloved and beautiful to him as he grew closer to Christ. He turned away from his father's cloth business and began to dress like a leper and lived among them. A community grew up around him, and the Gospel life they shared was centered around begging, service to the poor, peacemaking and joyful proclamation of the kingdom of God.

From St. Francis, I learn how to sacrifice comfort and live a prophetic message that God's love is wild and transformative. He and his brothers (along with St. Clare and the Poor Ladies) lived simply and devoted to Christ. Aware of his creaturedom, St. Francis proclaimed a mutuality with all God's creation in his Canticle of the Creatures, naming other as Sister and Brother. Having dominion over anyone or anything did not match his understanding of the Gospel. The message of his life is incredibly relevant today.

St. Francis' life was a prophetic message of embodied values. The Franciscan story overall is a story of stripping of comforts for the sake of the other, of living simply to be in union with God. Considering today's climate crisis (and the other systemic problems that stem from it), I am convinced our species and planet could survive if we also embodied the values of radical simplicity (or voluntary poverty), humility, downward mobility and nonviolent peacemaking.

Each of us must give up our comforts and make great sacrifices so others can survive, so ecosystems such as Lake Michigan can be places where other creatures thrive. Knowing we are small and yet impactful, we owe it to all the future creatures who are destined to praise the LORD.

Related: Beyond the 'birdbath industrial complex' is the radical St. Francis of Assisi