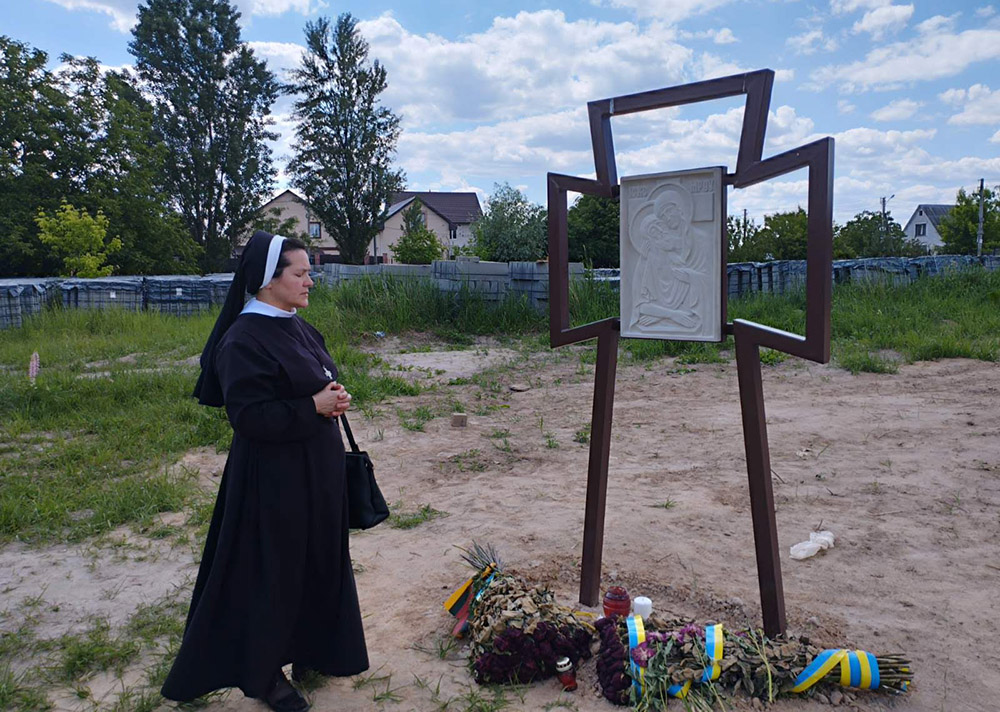 Basilian Sr. Januarija Isyk prays in Bucha, Ukraine. (Courtesy of Sisters of the Order of Saint Basil the Great)

My Oct. 10 morning in Rome was shaken by dozens of messages about the massive Russian strikes in Ukraine: Kyiv, Lviv, Khmenlnytsk, Zaporizhzhya, Zhytomyr, Poltava, Dnipro and many other places experienced terrorizing attacks. Russian forces fired more than 83 missiles that morning, and it was only the first wave for that day. It reminded me a lot of Feb. 24, the first day of full-scale war in Ukraine.

So, I took a deep breath, asking God to protect everyone under shelling and to give me strength to do my part. After that, I wrote numerous messages to sisters and relatives all over Ukraine to see whether they are safe. The silence from the other side challenged me to stay calm, reasoning that they might not have a signal or that they had turned off phones to save the battery for later.

Inhaling and exhaling, praying, and looking for some news occupied me for some 5-10 minutes. And the first responses came from Kyiv, with sisters answering: We are in the subway ... and from Lviv: We are in the shelter or We are well. We hear explosions and see smoke.

I was grateful that everyone responded and — with the name of Jesus in my thoughts and on my tongue — started to share this fragile, temporary good news with all our Basilian Sisters. 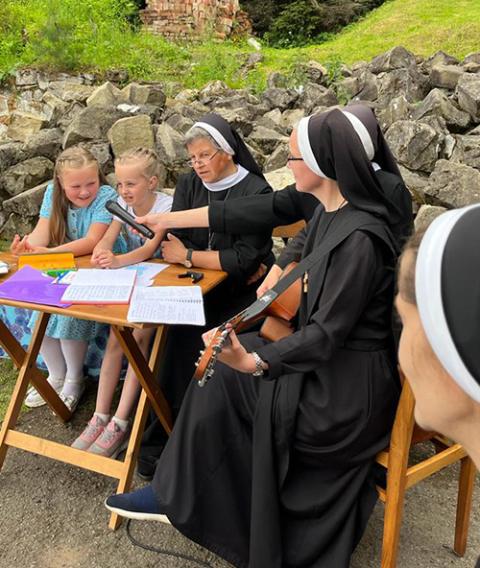 Basilian Sisters in Korchyn, Ukraine, with children of war (Courtesy of Sisters of the Order of Saint Basil the Great)

The shelling still had not stopped, so when the air alarm finished two hours later, I asked the sisters again what was going on in their communities. Some were without electricity and water; no one knew for how long.

What was striking to me in those messages — especially after the first wave of shelling was over — one could not sense fear or panic. After eight months of living in constant danger, there was gratitude for the life of each day. The sisters literally have learned to meditate under the bombs — and not only the sisters.

Observing the atmosphere in the society, there is a noticeable absence of complaining and anxious lamenting. Of course, no one was happy with the massive shelling. Most Ukrainians have a strong desire to stop that delirium of evil, and strongly believe that they fight for truth, justice, compassion and life itself.

Turning back and analyzing the history of the Ukrainian nation, we become more and more aware that this war is a turning point in the scale of centuries and the language that explains the meaning is essentially biblical or mythological. Someone who still thinks that this is a local war in Eastern Europe is mistaken. It is a war between civilizations.

This is actually a war that questions our human values. Is a lie acceptable if the liar has power, resources and nuclear weapons? Does being stronger give someone a right to take away your life, possessions, language, culture? If you witness injustice, do you stay merely concerned in your safety, or do you jump in to help the victim? What is more important: lower prices or the lives of the innocent victims?

Is there anyone in this world who cannot contribute to the victory of truth, love and justice? Who can say in any part of the world — in Russia or the United States or anywhere else — I am not responsible for what is going on in Ukraine, Syria, Myanmar? How you answer those questions will indicate to what civilization you belong. 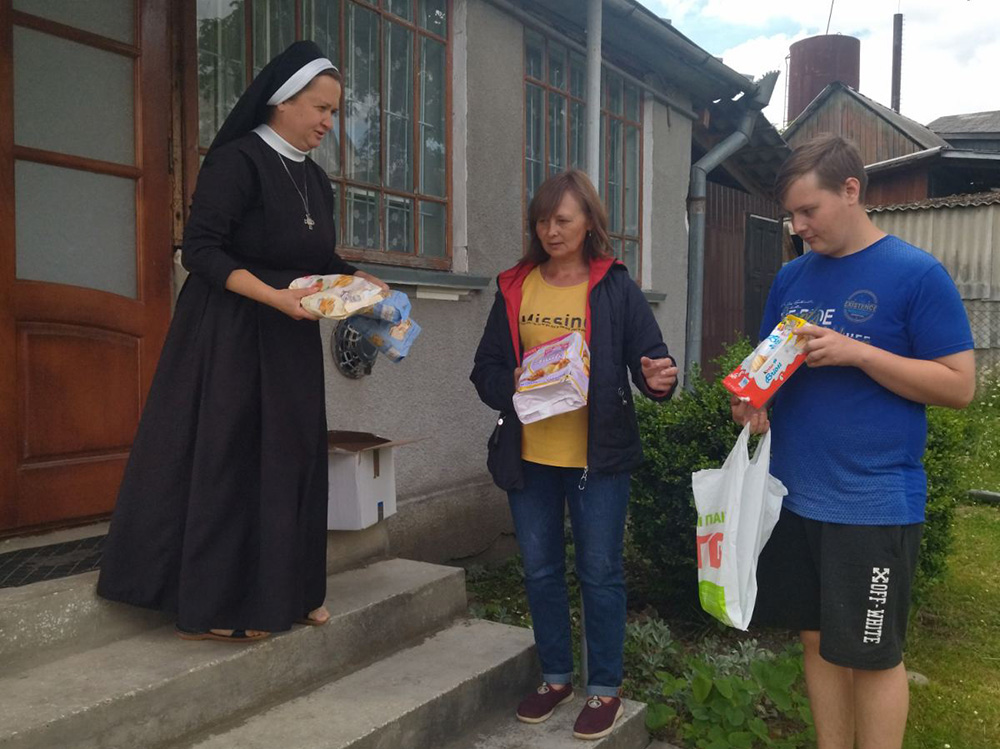 Basilian Sr. Anisiia Voloshyn shares food with those are in need in Voynyliv, Ukraine. (Courtesy of Sisters of the Order of Saint Basil the Great)

The questions and everyday experience of being hated and terrorized on one side and accepted with compassion on the other side has begun some changes in Ukrainians, including our Basilian Sisters. What have we learned from those months of war?

First, to fully appreciate every day and moment of life, because our tomorrow might not arrive. That means not to put off saying, I love you, or buying a toy that your child has wanted for a long time and seeing their joy — because even today some drone from Iran can explode in your apartment and it will be too late for a gift, to write that essay or to compose that song. Who knows, it might be your last message to the world, your last chance to wash the dishes because in an hour there might not be water and electricity for days.

Second, we learned that we are strong. Yes, we are stronger than all predictions made by different military experts. Ukrainians have less fear of Russian power than many other organizations and institutions. We are not afraid to make the Russian leader mad; Ukrainians have stripped away the myth of the mighty Russian military power, so that everyone can see a mere terrorist regime that kills civilians, women and children, but cannot achieve any impressive results in the war.

This revelation came together with a bloody price of thousands of victims of Bucha, Irpin, Mariupol, Izyum — and the list will become longer with each city and village freed from occupation.

Ukraine's counteroffensive also shows that we are stronger with support of our friends and that it is better to die with a free spirit defending your loved ones and home than to die in the concentration camps and gulags.

Everyone who advises Ukraine to stop defending ourselves and to compromise with Russia is not aware that this statement is recommending that we die in torture and invite Russian tanks to other countries.

Basilian Sisters — staying in our communities all over Ukraine — determined to continue our prayer and support and share the danger with our people.

Third, we have learned how many people of open heart and goodwill live on our planet; it warms our hearts and gives us hope. This wave of love, generosity and compassion seems like a miracle.

We have experienced it as Basilian Sisters in so many different ways. There could be one separate article in the future about organizations and individuals that helped and are still helping us during this hard and bitter year of 2022. Because of you, dear friends, so many refugees had food, shelter, medicine, so many wounded received proper treatment and therapy, so many lives were saved. 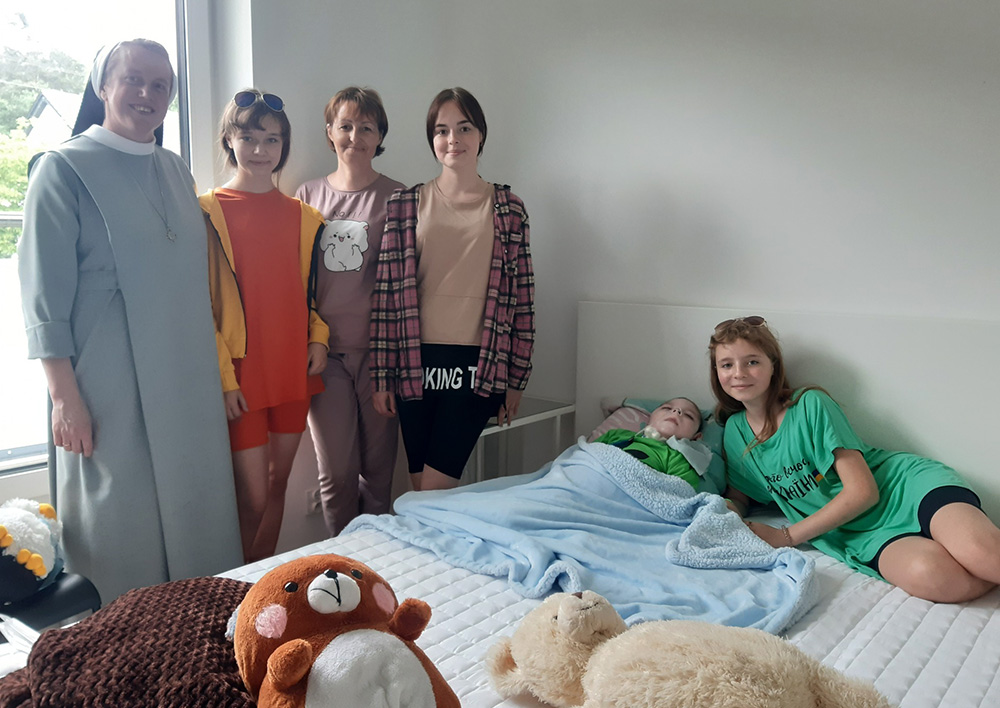 The Basilian community in Lviv, Ukraine, stays open for those in need. (Courtesy of Sisters of the Order of Saint Basil the Great)

Well, the war is not over, and perseverance is important. Our fathers and mothers, sons and daughters, brothers and sisters in the army are defending our home, risking their lives every day in cold and rainy conditions.

Ukrainians struggle in bombarded cities to continue their lives, giving their input to our victory — sometimes without electricity and water. Our citizens in the occupied territories, in captivity, who were moved forcibly to Russian territory, are waiting to be rescued.

We Basilian Sisters are staying with Ukraine, praying, discerning and finding meaning in what is happening; seeking the Lord under the bombs; giving voice to those who suffer and to those who desire to be free; giving shelter, food, support and love.

We stay faithful and we are asking you to help us in this decision. As Moses who prayed grew tired while Joshua was in the battle, so that "Aaron and Hur brought a stone for him to sit on, while they stood beside him and held up his arms, holding them steady until the sun went down" (Exodus 17:12), we need your support to hold up our spirit and our praying arms until the evil plans will be totally defeated.