The need for more prayer overwhelms me these days, as I pray and reflect. Seemingly, ancient reserves are exhausted! There is high demand for local and universal prayer. As I consider the saying "Think globally and act locally," I think the reverse is also true — especially when it comes to the needs for intercessory prayer for a world battered with socioeconomic and environmental issues, which no human being is capable of addressing.

No sooner did the world recover from COVID-19 and its socioeconomic implications, than it was ensnared by more severe challenges of new strains or variants of the disease, wars and global economic crises. Many lives have been lost and yet many more people are vulnerable to succumb to communicable and noncommunicable diseases. Loving care and accompaniment are a necessity.

With my central location at the national office of the Association of Religious in Uganda, I have the opportunity of sharing with sisters from various institutes and all works of life. Besides that, social and mainstream media animates us all, and makes the world awash with a uniform, breathtaking and awesome wave of stories running from the North to the South Poles.

The challenges are so great that noncommunicable diseases like diabetes, blood pressure and mental breakdowns with root causes in stress and stigma are the order of the day.

In a plenary assembly of the Vatican Congregation for Institutes of Consecrated Life and Societies of Apostolic Life, Pope Francis summarized the work of consecrated persons as "discerning and accompanying" in the apostolate. Facing the many complex situations in our work "can only be carried out within the horizon of faith and prayer," he said.

Now is the time, and I think this will require a change in our mindset.

So an essential question, Francis said, will be "Is this institute capable of integrating itself into the life of God’s holy and faithful people, or not? This criterion is decisive for discernment. Consecrated life is born in the Church, it grows and can bear evangelical fruit only in the Church, in the living communion of the faithful people of God."

And hope, the pope said, "prevails, founded on the beauty of the gift that is the consecrated life."

This reminds me of a similar reflective article by Mwansa Chalo, a young African economist and entrepreneur who participated in the Economy of Francesco in 2022. His encounter with Francis led him to relieve the experience the disciples during Emmaus episode (Luke 24:32). He learned that we urgently need to encounter and enter a personal relationship with Jesus so as to share the joy of encounter with the world full of misery.

Like the disciples, Chalo explained that he arrived in Assisi, Italy, "disappointed with and angry at the brokenness of our world. ... But when Pope Francis spoke to us, I felt a new energy within me to go out be part of the world to repair the world’s economy and our common home." 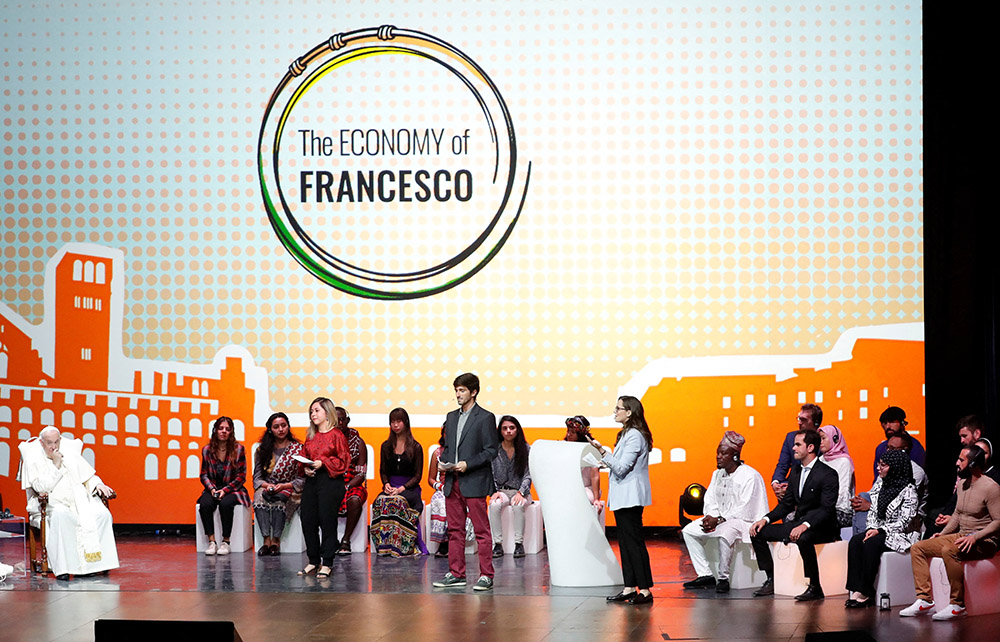 Pope Francis is welcomed to Assisi, Italy, Sept. 24 by young economists, entrepreneurs, financial advisers, scholars and scientists who have been working for two years on the Economy of Francesco project. (CNS/Reuters/Remo Casilli)

Similarly, with the rejuvenating power of the risen Lord, consecrated persons can turn the world around!

As consecrated women, we need to borrow a leaf from St. Francis, who beat all odds to renew the church in the 12th century. If Sts. Francis and Clare could have such an impact in that remote era, how much more can thousands of religious women make today?

As Pope Francis continues to make ardent calls, we bear a duty to respond by storming the heavens, with eyes raised in prayer. God's grace will enhance our outreach to brothers and sisters who live on the margins and who are desperately in need of our attention.

More than 1,000 young people who gathered in Assisi — having been energized by Pope Francis' powerful and inspiring words — are geared up for the task to build better and fairer societies — societies that are sustainable and regenerative. Following the pope's prescriptions in both his Laudato Si' and Fratelli Tutti, we borrow the words of St. Ignatius: "We are ready to set the world on fire!"

Consecrated women reinspired by youthful energizers will yield wonderful fruits. Motivated by the pope, young people are ready to act, and eager to give a new soul to the global economy.

Similarly, consecrated women should go revitalize lukewarm and strayed souls! The ever-recurring messages of Pope Francis — a fellow consecrated person — should not be wasted. Rather, coupled with the Scripture, his words should nourish as, to march to the margins of society where the shepherd smells like the sheep!