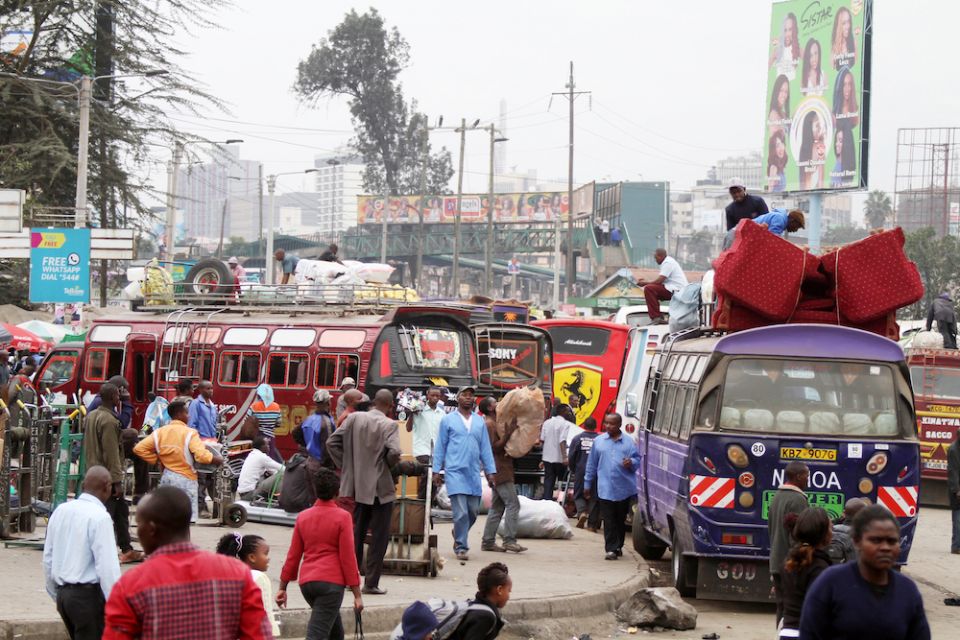 Kenya is known for its matatus — minibuses that often transport more people than they have seats for. The government has issued new directives to help prevent the spread of the coronavirus pandemic through the public means of transport. Fourteen-seat matatus are limited to a maximum of eight passengers; 25-seat vehicles, a maximum of 15 riders, while 30-seat vehicles and above must maintain a 60 percent maximum of seating capacity. (Doreen Ajiambo)

NAIROBI, Kenya — During the recent celebration of the Feast of the Annunciation, 13 nuns and two priests were arrested for conducting a secretive evening Mass at the Christ the King Catholic Church in Bungoma, a town in western Kenya 450 km from Nairobi.

The Solemnity of the Annunciation of the Lord on March 25 celebrates the coming of the angel Gabriel to Mary to announce to her that God had chosen her to become the mother of his son.

Speaking to Global Sisters Report, Bungoma Regional Police Chief and County Commissioner Abdi Hassan said that his officers managed to arrest two priests, 13 nuns and 46 congregants as they were conducting a church service despite a government directive issued March 14 that bans all public gatherings in order to tame the spread of COVID-19.

"We really respect the clergy, but it's very unfortunate that they are still conducting Mass even after being warned," he said, adding that the officers also confiscated items that were being used for worship — including the sacrament. "We are going to act tough on clerics and nuns who are misleading the public. I urge them to instead lead the fight against the novel coronavirus."

A sister from the congregation of the Little Sisters of St. Francis, who was among those arrested by police acting on tips from the public, said they were conducting prayers in honor of Mary while practicing hygiene and social distancing.

"I don't think we did anything wrong," she said after being released on police bond. "We observed high levels of hygiene, including washing our hands with soap. I believe the entire nation needs prayers right now to end the pandemic."

Catholic sisters interviewed for this story asked not to be identified for fear of police or public reprisal. Some were concerned about angering their congregation's superiors.

Scores of nuns across the country have been arrested and dozens forcefully quarantined for flouting a government directive on religious gatherings in a bid to prevent the spread of the virus. The number of coronavirus cases in Kenya have increased to 179 as the Ministry of Health projects that the country could have at least 10,000 cases by April 30.

Confirmed cases in Africa have exceeded the 10,000 mark, with 533 deaths as of April 8, according to data from Johns Hopkins University and the World Health Organization. Kenya is one of 52 African countries with confirmed coronavirus cases, with only two African nations so far virus free.

Public pressure to contain COVID-19 is strong in Africa, where it arrived late but where medical care and equipment such as ventilators are in short supply.

The government of Kenya, through the Ministry of Health, has unveiled strict measures to curb the spread of disease. A curfew from 7 p.m. to 5 a.m. was enforced starting March 27, and all international flights have been suspended. March 14, the government had banned gatherings, weddings and communal worship, saying it was illogical for people to attend functions where they risked infection.

Religious sisters are among those who have come under heavy criticism as being a weak link in the fight against the pandemic, with citizens criticizing them for defying the government directive.

Last week, residents of western Kenya reported several nuns to the police after they gathered at St. Paul's Kanduyi parish to pray despite an order against public gatherings.

In eastern Kenya, a Catholic sister, who recently traveled from Spain, defied the mandatory 14-day self-quarantine and was forcefully isolated by residents after she was spotted interacting freely with people. Beforehand, the locals had reported the nun to the authorities for defying government precautionary measures.

The nun is said to have arrived on March 18, soon after the government ordered that anyone arriving from overseas should self-isolate for two weeks.

"We can't die because of a few individuals who are disobeying government directives," said Erick Mutisya, a resident of Makueni, where the nun is currently being isolated. "We will arrest and quarantine them if they want to bring coronavirus here. Let's obey the authority."

People line up to wash their hands as a preventive measure against COVID-19 before entering a Nairobi bus park. Kenya officials fear the informal public buses that transport millions on a daily basis could be a weak link in the fight against the coronavirus. (Doreen Ajiambo)

Makueni County Gov. Kivutha Kibwana said the nun's actions forced him to intervene after residents reported her to his office.

"I wish to laud efforts by residents to call out individuals who fail to follow the given guidelines, especially on self-quarantine, because such people are putting the lives of others in danger," he said.

In Kisumu, a port city in western Kenya, dozens of nuns are still in quarantine after they came into contact with a Rome-based priest who tested positive for the coronavirus after leading a Mass during the burial of the mother of one of the nuns. The event was attended by hundreds of nuns from different convents across the country.

Fr. Richard Onyango Oduor caused panic after failing to quarantine himself in line with the government directive for people returning from abroad. The priest returned to Kenya from Italy on March 11 and conducted a Mass in Nairobi before traveling by bus to western Kenya to preside over the funeral on March 14.

Archbishop Philip Anyolo, who is also the chairman of the Kenya Conference of Catholic Bishops, said the church had adhered to the ban on religious activities in response to the directive given by the Ministry of Health and urged everyone to take precautions.

"It's very wrong if anyone is flouting government directives outlawing all public gatherings to combat the spread of the COVID-19," Anyolo told Global Sisters report. "Even if they are priests, nuns or anyone else who is defying government directives, then it's wrong. Let's come together as a church and help implement these measures."

The health department response team visits St. Monica Rapogi Convent in western Kenya after several nuns who attended a funeral presided over by a Rome-based priest were put on quarantine. Kenya, which has at least 179 confirmed cases, had banned all religious and social gatherings, and limited the number of mourners at funerals to 15. (Vincent Aduda)

Sr. Pasilisa Namikoye, the executive secretary of the Association of Sisterhoods in Kenya (ASOK), urged the sisters to follow the directive, saying the church is adhering to government plans to contain the spread of COVID-19.

"We have talked to our sisters to obey and follow government directives," she said. "We have instructed them to pray at the convents or do individual prayers."

Namikoye said that it will require individual responsibility to prevent further spread of the virus.

Globally, the death toll from COVID-19, the respiratory illness caused by the new virus, has passed 83,500, according to data compiled by Johns Hopkins University, while the number of infections rose above 1.4 million. More than 308,000 people have recovered.

"As AOSK, we have given instructions and directions to be followed by the sisters," said Namikoye, who is also a member of the Little Sisters of St. Francis in Nairobi. "But as a person, you cannot be everywhere to enforce the directives. It's an individual effort to do what's right. Failing to follow what the government says is wrong, especially at this time when we have an outbreak of a viral disease."

A senior nun at St. Theresa's convent in Kisumu, where the March 14 funeral was, noted that the nuns currently in isolation had been surprised by the news a week after the event and were not suspicious of anything until the case was announced by Health Cabinet Secretary Mutahi Kagwe.

"They didn't do it deliberately. They were even shocked to hear that the priest had tested positive for coronavirus," she said. "Many of them cried and prayed about the issue. They are living in fear and they need our prayers."

A health official demonstrates hand washing to religious leaders at a water tap at Nairobi's Matatu Terminal as a preventive measure against COVID-19. (Doreen Ajiambo)

A nun at St. Paul's Kanduyi parish denied flouting the government order against meeting in large groups. A Carmelite sister said many people came to church to pray without invitation from the priest and they observed social distancing.

"People are used to Mass especially during the period of Easter. So it is very difficult to stop them," she said. "We were not many, as is being reported by the media, and no one was arrested. They just warned us against gathering."

Kagwe said that reckless talk from faith leaders and citizens has brought Italy to its knees.

"Let us not forget that Italy began its unfortunate experience through the decision of some people to continue attending gatherings, including religious ones, as if nothing had happened," said the health official. Just after the March arrests, he said, "On Sunday, Italy lost 784 people within 24 hours. We will not escape a similar fate if we do nothing to address the risk in such gatherings."